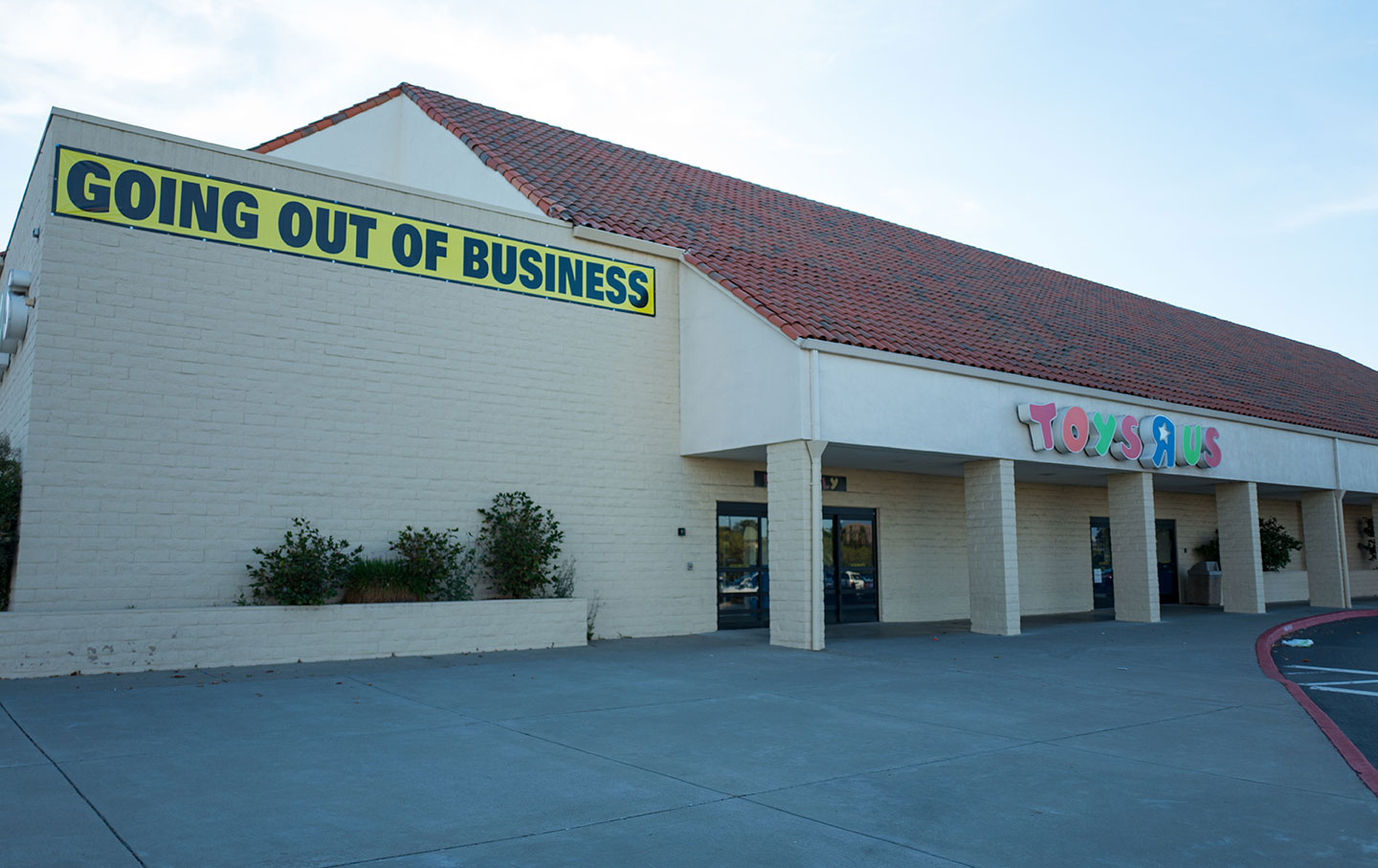 When Toys “R” Us went out of business, it offered no severance pay to the 1,500 employees it had in New Jersey. (Smith Collection/Gado/Getty Images)

On Monday, the New Jersey legislature gave final approval to a bill that would make it the first state in the country to guarantee severance pay in the wake of mass layoffs. The bill ensures that workers at big companies have to be paid at least a week’s wages for every year of work. It now sits on the desk of Governor Phil Murphy, who has 30 days to sign or veto it; advocates say the governor has expressed support for it.

The bill is a response to a series of bankruptcies among major employers in the state over the past two years. When Toys “R” Us went bankrupt in 2017, the company had 1,500 employees in New Jersey. At first, it announced that it would let them go without any severance pay at all. Without this new law in place, it was perfectly legal to refuse to give longtime workers any financial cushion in the wake of sudden job loss. So employees came together, with the help of the worker-organizing nonprofit United for Respect (at the time called Rise Up Retail), to demand payment for their years of work at the toy retailer. They eventually secured a $20 million hardship fund from the company’s private equity owners, KKR and Bain, although it was a good deal less than the $75 million they had originally demanded. When Sears went bankrupt in 2018, its management similarly told employees they wouldn’t get severance pay, either. Workers pressured Eddie Lampert, whose hedge fund, ESL Investments Inc., bought the company in 2005, to agree to pay them up to $43 million, although he later tried to back out of the deal during the bankruptcy process.

It was in the wake of those liquidations, at a rally of laid-off Toys “R” Us employees, that New Jersey State Senator Joseph Cryan got “engaged on the issue,” he said. He starting working on the legislation, supported by Toys “R” Us and Sears workers. “Candidly, I’m just tired of the little guy getting screwed,” Cryan said.

The law will cover more than retail workers, applying to all businesses with 50 or more employees who lay off at least 50 people. And by doing so, it seeks to make the front-line employees who create products and generate companies’ profits less disposable. As Eileen Appelbaum, codirector of the Center for Economic and Policy Research, told me last April, it is currently “virtually costless” to fire employees as part of a bankruptcy process or when a financial company like a private equity firm buys a company and wants to boost profits. “Squeezing labor is the fastest way to increase cash flow,” she explained. 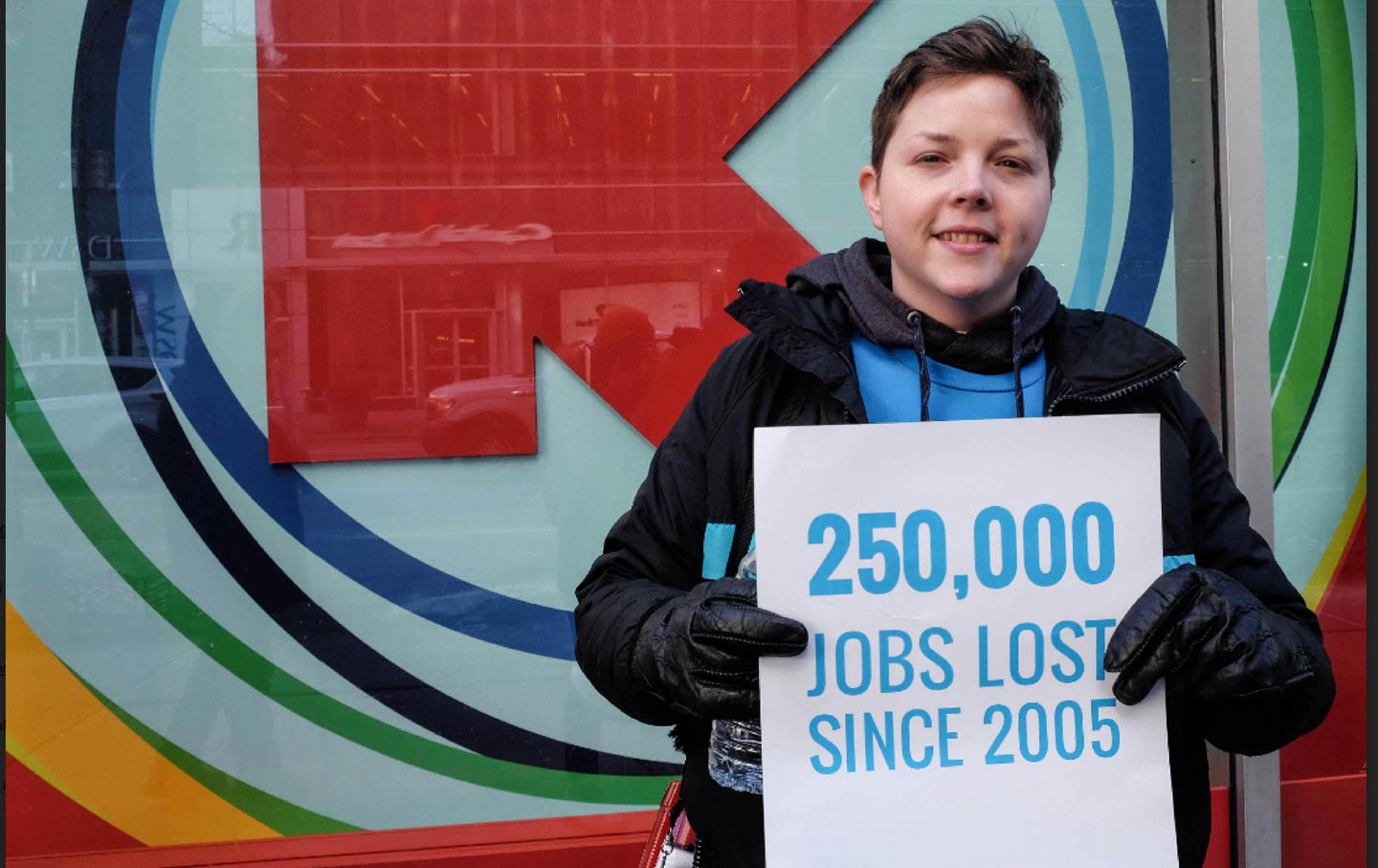 But New Jersey’s new law could “cause companies to think twice about whether laying off workers is their go-to solution for every problem that they face,” she said. Firing people would actually come with a cost. That could tip the scales in favor of keeping stores and factories open and people employed.

Beth Hink experienced firsthand how the current calculus works. Despite nearly two decades of work with Payless ShoeSource, Hink found out that she’d be losing her job through the press. Last February, she read that the company was going bankrupt and closing all of its stores.

As a multi-store leader in New Jersey at the time, running two locations, that meant she had to be the one to inform coworkers that they would also be losing their jobs. “It was kind of awful,” she recalled. “That was a phone call that I don’t want anybody to have to make to their employees.”

At first, the company promised workers would be getting severance pay to see them through the rough patch between jobs. But employees quickly realized that the $1.3 million it owed in severance pay was not secured from the bankruptcy process. The employees were left to file their own claims to try to squeeze as much compensation out of the process as they could, going head to head with creditors also seeking payment, who get preference over worker compensation in bankruptcy court. “The whole process has just been extremely stressful,” Hink said. She and her coworkers even teamed up to help each other fill out and send in the necessary paperwork. Some of them postmarked it by the correct date, but because the forms were received late, they won’t get anything.

“There really isn’t any recourse for us as Payless employees,” Hink said. She and her coworkers received three days’ worth of severance pay in the immediate aftermath of the store closings, but that’s it, so far. Whether they will get more depends on what happens in bankruptcy. “We don’t know yet whether or not we’re going to receive any,” she said. While she waits and looks for a new job, Hink has had to cash out her 401(k). “I’m living on my savings and trying to make every dollar stretch.” And if they do get pay, it’s likely to be far less than they say they are owed, discounted by a bankruptcy judge.

“I didn’t think there was anything we could do about it,” she said. But then she found out there was something she could do not just for fellow retail workers but for every employee in New Jersey. Hink testified in favor of the guaranteed severance pay bill in the New Jersey assembly and watched “like a kid in the candy store” as legislators voted in favor of the measure.

“Finally, workers are added to the bottom-line equation when corporations look at future business,” Cryan said. “Workers’ performance and workers’ dedication to the company were secondary,” he added. “Now hopefully with this bill they’ll be moved more to the forefront.”

Severance also offers “security” and “protection” for workers, Hink explained. It gives them “a little space to breathe and figure out what your next move is going to be.” And the bill will help part-time employees, who are often left out of severance payments, no matter how long their tenure at a company. “The idea that their work doesn’t matter seems degrading to me,” Cryan said. “It’ll be part of the equation now.”

The bill has other provisions meant to ensure more financial stability when companies fail: more notice for employees ahead of layoffs, job protection for a certain period of time after a bankruptcy or change of ownership, and the classification of severance payments as compensation, giving it preference in the bankruptcy process alongside creditor claims so that workers are more likely to actually receive payment. It will also hold financial owners such as KKR or Eddie Lampert’s hedge fund, which owns Sears, responsible for paying severance claims as joint employers.

The bill, if signed into law, won’t secure justice for Beth Hink and her coworkers. “This bill doesn’t go back and fix the wrongs,” she noted. They still have to fight for compensation in court. “But what it does is fix the wrongs that could happen for other people.” She said that after the Assembly vote on Monday, she called her son, who works at a grocery store in the state, and told him, “Hey, guess what, you’re going to be protected in case your company closes and you get laid off.”

“That was awesome,” she added. “To be able to say, ‘We got something accomplished and you’re protected, and a lot of families across New Jersey are protected as well.’”

Cryan hopes the idea doesn’t just stay within the state’s borders. “I hope the other 49 take it,” he said. “I hope it becomes a national trend.”