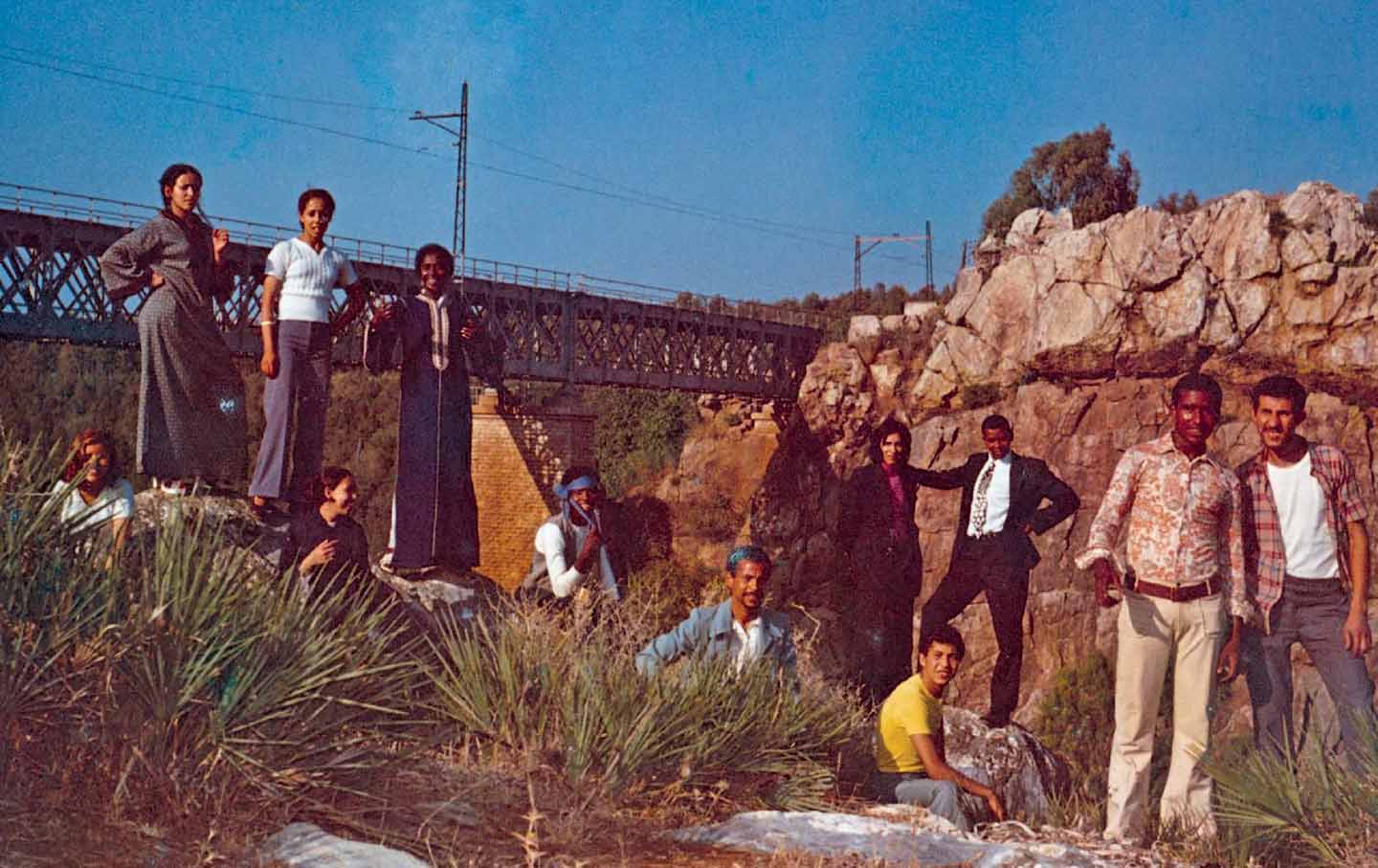 Abdelakabir Faradjallah was destined to become an artist. Born in Casablanca’s Benjdia neighborhood in 1942, he was still a child when a battle was fought in the city between Vichy French forces and Anglo-American troops; at one point, a rocket exploded near his home. He remembers massive food shortages, including once when his mother had to hide the sweets she’d purchased for his younger brother, fearing that some desperate person would steal them. Amid this strife, he began singing as a child, first with his mother and sisters during weddings. His first real gigs came as a youth in the 1950s, when he was booked as a singer at parties. Faradjallah enrolled in the Casablanca School of Fine Arts in 1958, where he exhibited all the traits of a budding polymath, studying architecture and sculpture, ceramics and silk-screen printing. Four years later, he joined the city’s music conservatory, then cofounded the Association of Moroccan Filmmakers—​intended to cultivate the country’s next generation of movie directors—with friends from the fine arts school.

By 1967, he had quietly started writing his own songs. The first was “L’Gnawi,” a vehicle for introducing people to the Gnawa music he grew up around. It’s one of the biggest musical genres in Morocco, pairing ritual poetry with music created on three-stringed lutes, three-stringed basses, large iron castanets, and massive drums. A year later, he put together a band, Attarazat Addahabia, to bring the music of his childhood to the masses. The 14-member group spent the next five years playing small shows here and there, hoping to make an impact. In the end, it managed to do just that, eventually playing on TV shows and in football stadiums.

Over its course, from the late ’60s to the 1990s, Attarazat Addahabia was made up of three generations from one Casablancan family, with Faradjallah at the helm. In 1972 the group convened in the studio of the Boussiphone record label to record an 11-track album titled Al Hadaoui, though Boussiphone, for whatever reason, decided not to release it. A year later, the band rerecorded the album at RTM studios in Casablanca and released it independently. The second iteration of Al Hadaoui was recorded under duress, with fewer instruments and fewer players. As a result, the album that people heard was more scaled back than originally intended. But now Habibi Funk Records, a Berlin-based label that reissues Arabic funk and jazz from the 1970s and ’80s, has obtained and released the original Boussiphone version. As Habibi Funk says in the album’s liner notes, “We knew nothing about the band. We just had the reel with the music but very little information. What we knew was that the music was incredible and very unique.”

Over the past two years alone, Habibi Funk has issued a masterly compilation of Arabic psych-funk and two forgotten albums by the Sudanese funk maestro Kamal Keila and the jazz group the Scorpions and Saif Abu Bakr. With its dedication to finding obscure recordings from the Middle East and North Africa, Habibi Funk has become one of the foremost excavators of a buried musical culture. Without a label like this, a wider audience would never have heard Al Hadaoui in its full majesty or the voice of Abdelakabir Faradjallah.

Al Hadaoui is a captivating record that pairs the grit of ’70s American funk with the festive sound of Gnawa. That culture is fully represented on Al Hadaoui, down to the call and response between Faradjallah and the background singers, who prod him throughout the album. The result is a dense, shape-shifting blend of US pop traditions and traditional Moroccan music, drawing a through line to the tightly coiled funk of James Brown. Faradjallah unpacks weighty themes over upbeat grooves designed to make listeners dance. So while he sings of spiritual guidance, romance, and what we now call cultural appropriation, his words are meant to sound good over the melodies compiled by him and the band. His songs “are all about poetry and stylistic exercise, translation in English is somehow impoverishing,” says Sabrina Kamili, a translator who worked on the record with Habibi Funk, in an e-mail.

This kind of forward-looking experimentation is present on the title track, in which Faradjallah tells the story of a wandering hippie who has just returned to Morocco. Here, he uses the figure of the hippie to make a critical point about cultural appropriation that wouldn’t be out of place in contemporary conversations about the politics of cross-cultural exchange. “In the eyes of Faradjallah,” Kamili writes, “young Moroccan people appropriate the Western codes of the hippie countercultural movement without understanding its cultural foundations. He is not against the movement but [argues] that there should be a movement with an Arabic cultural anchor.”

But the album isn’t all serious; on “Kaddaba,” Faradjallah uses breezy percussion to leaven the story of his wife leaving him, walking listeners through it with a wink and a shrug. “We swore an oath to live our lives together,” he sings in Arabic. “Everything we had imagined has evaporated.” Al Hadaoui presents a wide-ranging view of Gnawa culture and the people who live it, from the Moroccan wanderer to, on the song “Taali,” the women Faradjallah loved and lost along the way. “Albaki,” my favorite track on the album, begins with a desolate blues intro that leads into a rapid mix of stacked percussion and drifting guitar chords. “Albaki” is the most hypnotic song on the album; look beneath the layers and you’ll find another story of romantic pain, yet this time, the protagonist wants to shield his grief from his peers. 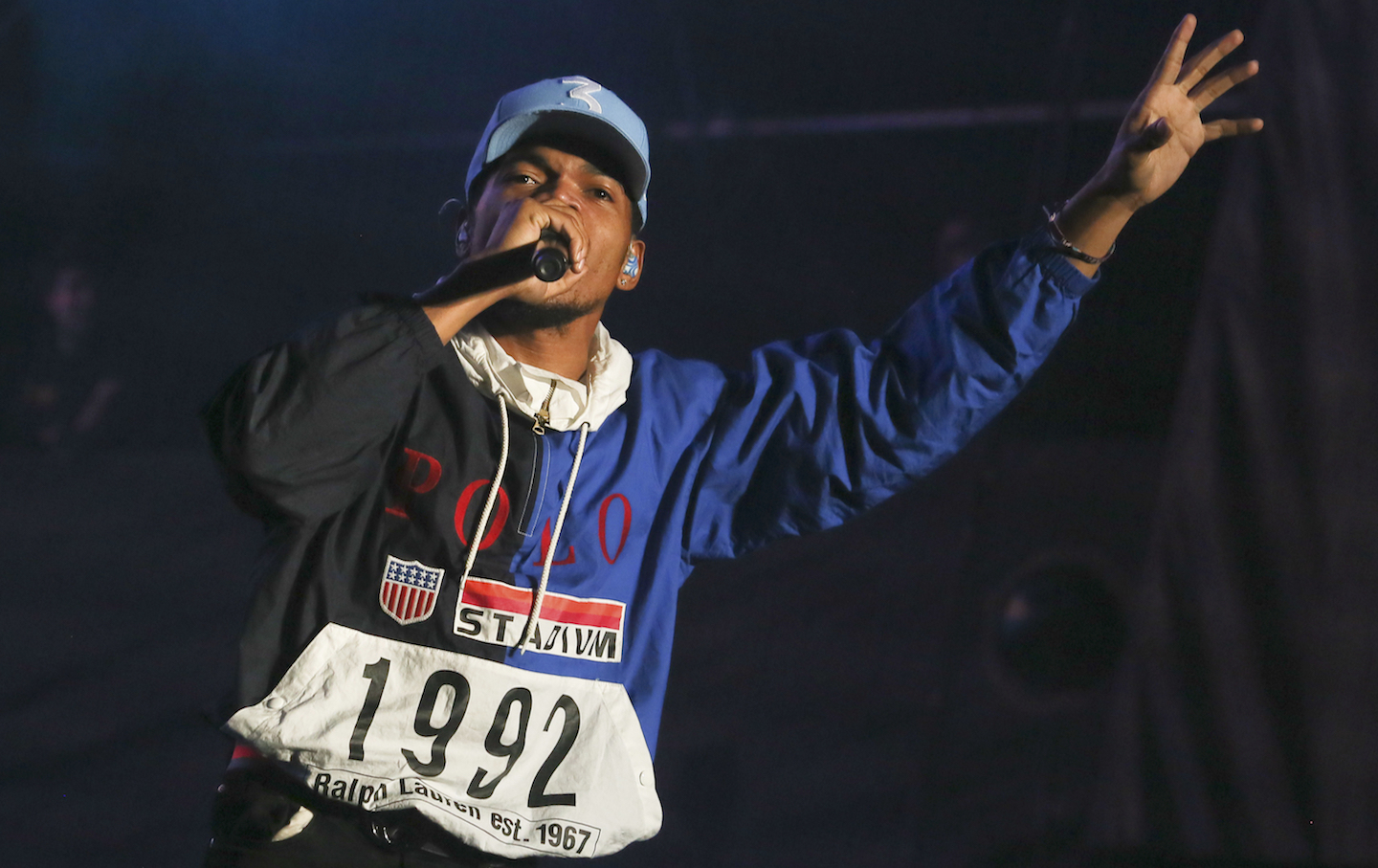 In its entirety, Al Hadaoui offers a multifaceted glimpse into a musical subgenre that’s gone largely unnoticed in the United States. When American listeners think of African music, they almost invariably think of Afrobeat, the percussive hybrid of funk and soul godfathered by Fela Kuti in Nigeria. They might also think of South Africa and its synthesized blend of disco, which, in the mid-’70s, became the soundtrack for young people rebelling against the tyranny of apartheid. The music of North Africa has never received the same attention, and Al Hadaoui is a great place to start. Though Faradjallah was clearly influenced by American music, he kept his own culture at the fore. The result is a riveting funk-rock hybrid, steeped in Gnawa, that fans of Santana and Can (among others) will appreciate for its polyrhythmic melodies and cultural chants.

In 1973, Faradjallah and Attarazat Addahabia got their first big break when they played the Municipal Theatre of Casablanca. From there, they started performing in swanky hotels and on local television and gained a sizable following throughout Morocco. They even built their own venue to perform in—a monumental feat for any band, let alone one that never achieved the international success of, say, the Rolling Stones. Bands are beholden to promoters and their venues; to have your own theater is a flex. Attarazat Addahabia released another album in 1982 and then went back on the road, where the group became known for marathon shows that sometimes lasted 12 hours. In the ’80s, the band stopped performing while the drummer, Zaki, recovered from a serious illness. Four years later, he and the rest of the group returned to the stage and picked up where they had left off.

Yet by the mid-1990s, Faradjallah was losing steam and decided to stop playing music altogether. It was time for a new generation to take up the band’s legacy and for him to lead a quiet, more regular life. Ever the artist, he still paints—in 2018 he did calligraphy work for a Habibi Funk artists’ showcase in Dubai—and he runs a TV repair shop in the Belvédère–Aïn Sebaâ district of Casablanca.

For a period in the 1970s and ’80s, Faradjallah and his band were a beacon of light for other Moroccan groups to follow. Al Hadaoui captures the moment when that light shone brightest; 47 years later, it remains a luminous example of Moroccan funk.