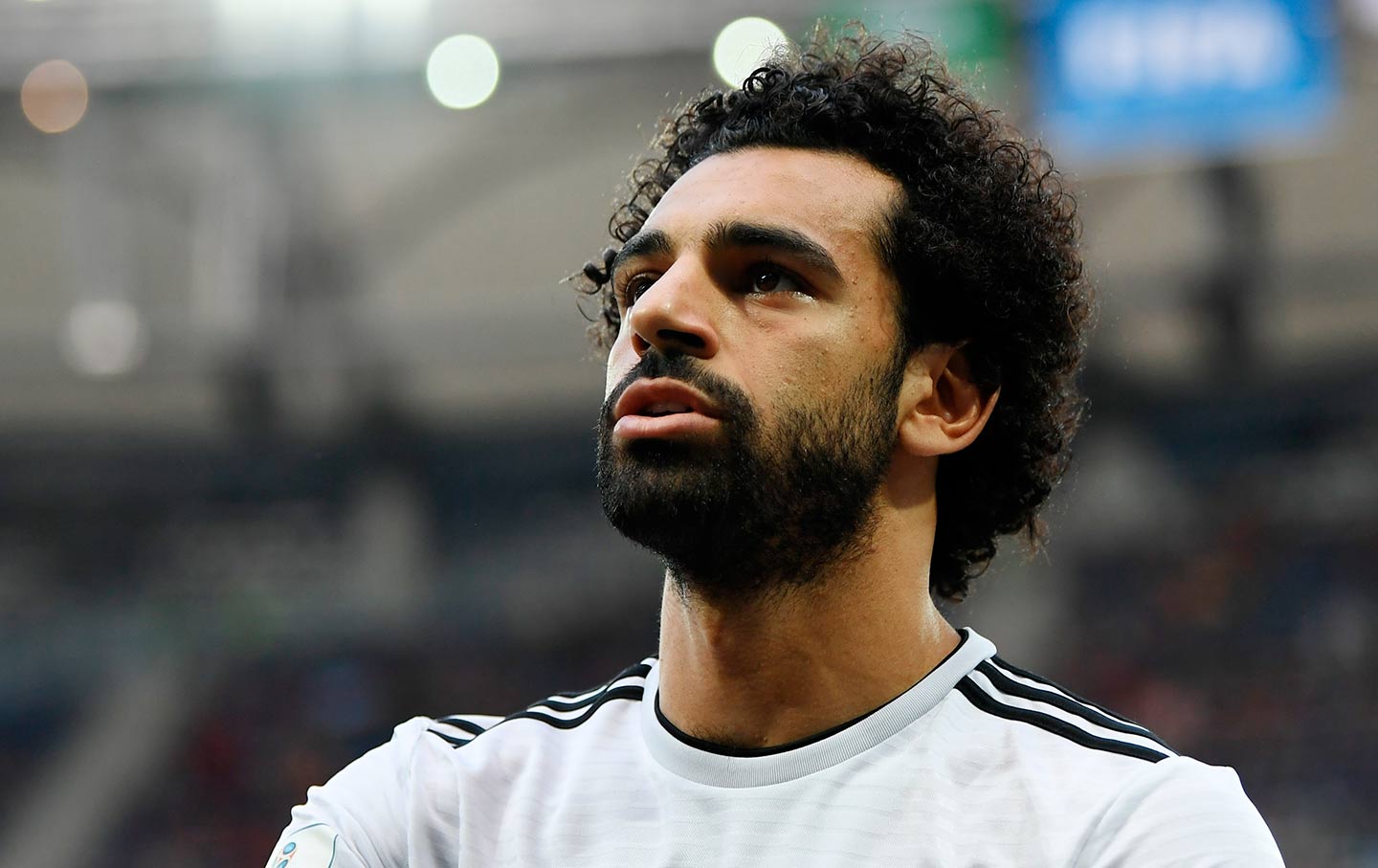 The scene was as familiar as anything soccer fans had seen this past season: star Egyptian forward Mohamed Salah peeling away from the final line of defense, whippet-quick legs motoring almost a yard in front of the rest of the body, one touch, and the ball dispatched nonchalantly into the goal. After opening the scoring against Saudi Arabia in the final group game of the World Cup, however, the celebration did not look like the giddily triumphant afterword to any of the 43 goals Salah had scored this season but something quite different–a largely emotionless grimace-smile. Fatigue, maybe, or even exasperation.

Egypt had already been knocked out of the World Cup in the previous week, and its World Cup run was a pained, prolonged stumble. But that’s not all that had been weighing Salah down: The game had also come a few days after Salah had been uncomfortably championed at a dinner by the Chechen warlord president Ramzan Kadyrov and granted “honorary” Chechen citizenship. Sure enough, within hours of the Saudi game, there were rumors of Salah’s discontent and potential retirement from the national team.

The rumor of Salah’s international retirement has come after one of the most glorious individual seasons in recent memory, nudging him into stratospheric heights as one of the world’s greatest players alongside Cristiano Ronaldo and Lionel Messi. After scoring just once in his first three Premier League games, the goals gushed forth in an unprecedented deluge. Records fell by the week: most goals scored in a season by an African player, most goals scored by any player in a regular Premier League season, Premier League Player of the Year, and African Footballer of the Year. All of this as a skinny, brown-skinned, and bearded Arab-Muslim who prostrates himself to Allah in gratitude after each goal. At a time of rising Islamophobia and anti-immigration movements in Europe and the West and divisive political factioning in the Middle East, Salah’s individual triumphs as an openly and visibly devout Muslim made him an icon of Egypt and the Arabic world.

“Salah’s visibility on the international stage has been gratifying to me as an Egyptian football fan, and his embrace by Liverpool FC and its fans is absolutely delightful to me as a Muslim and African,” said Sophia Azeb, an Egyptian-Palestinian writer and professor at the University of Chicago. “What a treat to hear Liverpool fans chant, ‘If he scores another few, then I’ll be Muslim too,’ in the midst of Brexit!”

Khaled Beydoun, law professor and author of American Islamophobia, didn’t hold back in praise, telling The Nation, “Mohamed Salah is, very possibly, the greatest Arab footballer ever. During a time of widespread crisis in the region, and military rule in Egypt, Salah is a source of pride for not only Egyptians, but more broadly, Arabs and Muslims across the world. A much-needed archetype of excellence and transcendence for peoples in dire search of hope.”

Salah’s ascendance has meant so much in this political climate, even if he has tried his hardest to stay religious but apolitical. Having managed in a small way to unite a polarized country and fractious region through a combination of jaw-dropping talent, humility and healthy doses of philanthropy, Salah’s popular value also leaves him exposed to particular maneuverings.

“Salah’s meteoric rise, unfortunately, comes at a difficult time,” Beydoun said. “Because of his global stature and just how deeply beloved he is by the Egyptian people across political, religious and ethnic lines, Salah is a galvanizing force within a divided nation. His excellence on the pitch and humility off of it has elevated him into a national icon, and his desire to be “apolitical” is his attempt to remove himself from a rigid and unrelenting political crucible where he cannot win.”

Controversy surrounded the Egypt camp before the World Cup even kicked off. The team chose Grozny, the capital of the predominantly Muslim republic of Chechnya as its base. The Chechen regime is notorious for a slate of human-rights abuses under Kadyrov’s authoritarian rule and a brutal state militia, including the purges of gay men and extrajudicial killings of dissidents and human-rights defenders. Human Rights Watch lambasted FIFA’s “shocking and outrageous” decision to authorize Grozny as a World Cup training-camp base. Despite this and the fact that staying in Grozny forced the team to travel immense distances for group games, the Egyptian Football Association was unmoved.

Kadyrov has emerged as Russia’s loudest Muslim leader and frequently uses sport as an instrument to both legitimize his public image and consolidate his rule. Salah, possibly the biggest and most revered Muslim sports star of the moment, was the ideal propaganda tool for this project.

“I was frankly furious that Egypt was hosted in Chechnya in the first place, as it was clearly foreshadowed how Ramzan Kadyrov would manipulate this access to Salah,” Azeb said.

As the team arrived for the World Cup, Kadyrov moved quickly. Rousing Salah from a nap, Kadyrov paraded with him in front of a stadium of thousands of screaming fans for an absurd public-relations spectacle. He subsequently posted a bizarre, moon-eyed video compiling highlights of Salah’s goals, scenes of Saleh walking and driving around Grozny and being presented with a 100-kilogram birthday cake iced with Egyptian and Chechen flags. Then, finally, there was a lavish banquet dinner, where Kadyrov pinned a Chechen flag to his chest and granted him honorary citizenship. There has been a sense that the Egyptian authorities have exposed and used him as political meat–on the eve of the Egypt’s crunch match against Russia, “celebrity visitors” were brought into the team hotel and invited to roam player’s rooms until the early morning. After all of this, Salah’s agent tweeted abruptly: “Fuming.”

The dinner with Kadyrov was reportedly a final straw, and it marks an impossible crossroads for Salah’s desire to stay at a remove. Not doing anything could be interpreted as an implicit endorsement of the appearances with Kadyrov, and of Chechen political authorities in general. Retirement could be read as a firm indictment of Kadyrov, Chechnya, and the Egyptian Football Association, in addition to the complicated political freight of rejecting the national team. For Salah, there seems little way out of the gravitational pull of politics that are increasingly entangled with his career.

But Azeb notes that his desire to escape the burden of politics isn’t surprising, considering the outcomes of other heralded Egyptian athletes, pointing to the fate of Mohamed Aboutrika, the Egyptian soccer legend who was voted the country’s greatest ever player just this January. After endorsing the previous Muslim Brotherhood–affiliated president Mohamed Morsi dethroned in a 2014 coup d’état by current president Abdel Fattah el-Sisi, Aboutrika now lives in exile, accused of funding the Brotherhood and placed on a terror watchlist amid the Sisi administration’s crackdown on dissidents.

“To be absolutely honest, I think Salah would be making the correct decision to retire,” Azeb said to us. “Aboutrika’s fate is a stark reminder that no public figure in Egypt remains independent from the regime for long, if ever at all. The Egyptian Football Association put him and the rest of the national team in an awful situation, and Salah’s decision to step back may be the firmest position he can take without sacrificing his freedom of movement in Egypt forever.”

This is both the glory and the burden of Salah’s star: Everything he does is crossed under a political sign. Egypt’s presidential elections earlier this year were widely dubbed a sham, the incumbent Sisi sweeping to a largely unopposed landslide victory after quashing the nascent campaigns of five other potential candidates. Ultimately, his runner-up was more than 2,300 miles away in Liverpool training for an upcoming Champions League game against Manchester City, after more than 1 million Egyptians had written in Mohamed Salah for president. Retirement or not, the noise that has trailed adulation echoes loud, and will continue on.