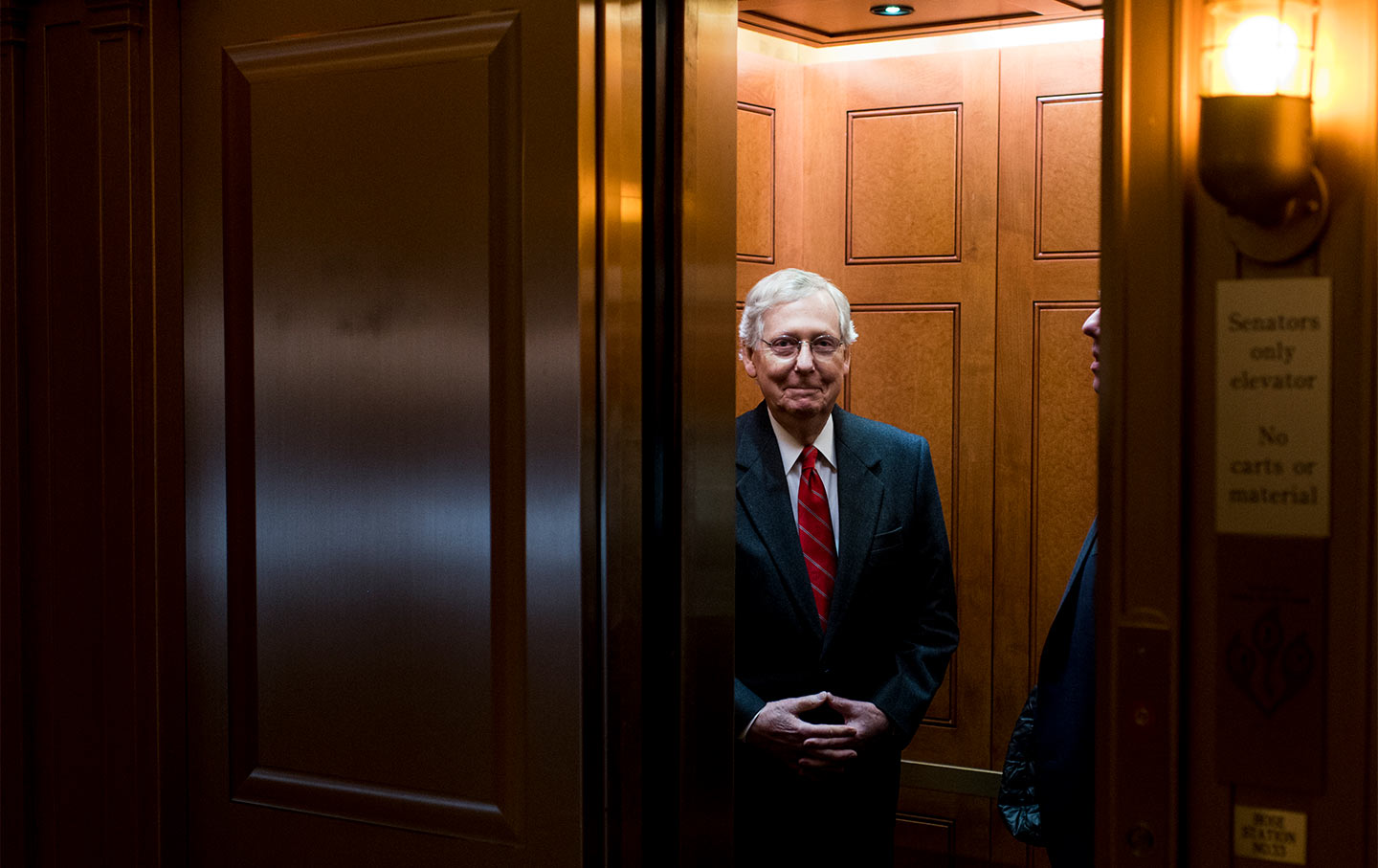 With the blithe insouciance of a politician who imagines that he will never be held to account for his abandonment of constitutional duty, Senate majority leader Mitch McConnell signals on a daily basis that he is in the service of one man—Donald Trump—as opposed to his constituents in Kentucky or the better angels of our nature.

As the president blusters and bumbles toward war with Iran, McConnell promises him a clear path. As the Senate prepares to consider the high crimes and misdemeanors of a lawless executive, McConnell promises to fix the impeachment trial in Trump’s favor.

The question is not whether McConnell has abandoned his oath to support and defend the Constitution of the United States against all enemies, foreign and domestic. He did that long ago—even before he rewrote the rules to block the Supreme Court nomination of Judge Merrick Garland, in a move that confirmed the senator’s choice of partisanship over patriotism. The question is whether Democrats will in 2020 challenge McConnell on the grounds where he is most vulnerable.

Kentucky State Representative Charles Booker says he is prepared to mount that challenge.

Booker, who on Sunday entered the May 19 Democratic primary that will name McConnell’s foe, is blunt about the threat of war. “Trump has shown that he will act without regard for our allies, our laws, or our interests. And Mitch McConnell has shown that he’ll let him do it,” the state legislator argues. “War with Iran would be a disaster. If Trump tries to go to war, Congress must intervene.”

Booker is equally blunt about the need to impeach the president. At a November rally in Louisville, he told the crowd, “We’re making our voices heard today because we are declaring that no one is above the law and our democracy is not for sale.” After the House endorsed two articles of impeachment against Trump, Booker said, “This is cut and dry: The president broke the law, the House impeached him, and now it’s the Senate’s job to remove him from office. Mitch won’t let that happen, and that’s why he has to go.”

When I spoke with Booker on the eve of his announcement, he argued that McConnell won’t be beaten with a cautious campaign that allows the well-financed incumbent to paint his opponent into a corner. “We need to speak the truth about structural racism, about poverty. We have to talk about how families are struggling.… People have given up on politics, I understand that,” said the veteran policy analyst and legislative aide who held a number of state and local posts before his election to the state House in 2018. “But I am ready to deliver the message: ‘Mitch McConnell isn’t on your side. He isn’t telling you the truth.’ I know we can reach people.” To get through to voters, Booker says Democrats must develop an unrelenting critique of McConnell as a political careerist: “an opportunist [who is] going to do whatever it takes to get power.”

Currently, McConnell’s power trip has aligned him with Trump, who won Kentucky with ease in 2016 and could well do so again in 2020. But Booker believes an honest discussion of why McConnell has fallen in line with Trump—“he’s going to do whatever it takes to keep his power”—exposes the senator as the fraud that he is. “What you’re seeing from Mitch McConnell is disgusting,” observes the state legislator. “He has said on national television that he will not respect his oath. What’s good for the country? What’s good for national security? He doesn’t care.”

Booker is prepared to make the Democratic primary a test for the party. Retired Marine Corps pilot Amy McGrath, who lost a 2018 congressional race in the Lexington area, is seen as the front-runner in a contest that also features Steven Cox, a progressive pharmacist, and Marine Lt. Col. (Ret.) Mike Broihier, a farmer who offers a savvy critique of McConnell. McGrath has gotten a boost from Senate minority leader Chuck Schumer and party leaders in Washington. “McGrath, who entered the race in July, has already raised more than $16.9 million for her Senate bid and spent $2 million on television advertisements in 2019,” reports the Lexington Herald-Leader. Booker doesn’t have that kind of money, but he believes a progressive movement can upset McGrath in the primary.

McGrath’s Senate bid has earned mixed reviews in Kentucky. As the Louisville Courier-Journal notes, she had “a rocky rollout” and

upset some progressives when she said McConnell hasn’t done enough to help President Donald Trump keep his pledge to “drain the swamp” in Washington.

The retired Marine fighter pilot enraged liberals further when she said in an interview with The Courier-Journal she would have voted to confirm Judge Brett Kavanaugh to the Supreme Court.

Hours later, McGrath backpedaled and said she would have, in fact, not voted to confirm Kavanaugh to the high court.

Now, the Herald-Leader points out, “McGrath, with her eyes on a general election that will be decided by an electorate that gave President Donald Trump a nearly 30 percentage point victory in 2016, has attempted to take a centrist path on the divisive issues raging on Capitol Hill. To date, she has not said whether she thinks Trump should be impeached.”

Booker thinks Democrats must draw clear lines of distinction. “I think the only reason Mitch McConnell is still in office,” he says, “is because Democrats have been running away from him, looking for the soft center.” To that end, Booker pulls no punches. Because of this, he says, he can make connections with voters from different backgrounds and different regions of the state who are united by a disdain for “status quo, poll-tested” politics.

Booker’s exploratory campaign took him from urban Louisville to farm regions, battered factory towns, and rural eastern Kentucky, where he says he encountered enthusiasm for an economic justice, Medicare for All, Green New Deal challenge to McConnell that tells Kentuckians, “This is bigger than party or politics. This is about survival. People are dying—from black lung and asthma; from drug addiction, and gun violence. Our jobs have gone away while politicians have delivered empty promises and CEOs get to keep cashing checks.… For too long, we have been lied to, robbed, and exploited. Demeaned and disrespected. We’ve been shut out of the decision making process and our voices drowned out by the wealthy and well connected. We’re sick of the corruption. We’re sick of the politicians who ignore us, and the ones who play political games instead of just telling us the truth.”

The state representative proposes a strikingly different race against McConnell than those Democrats have run in the past; one that says, “You don’t beat the most unpopular senator in America by running away from him, or trying to be like him. You win by putting him on the defensive, holding him accountable, making sure he has to answer for what he’s done to us, and shining a bright light on the reality that he has profited from our pain.”

They only way to overcome McConnell and his money, Booker says, is with a “movement” campaign that excites new voters, and tells older voters that they have a right to be frustrated with politics as usual. “This is a question of what our future is going to look like in very real terms,” he says. “I believe we can link arms with people across Kentucky and call out the status quo on all sides.”