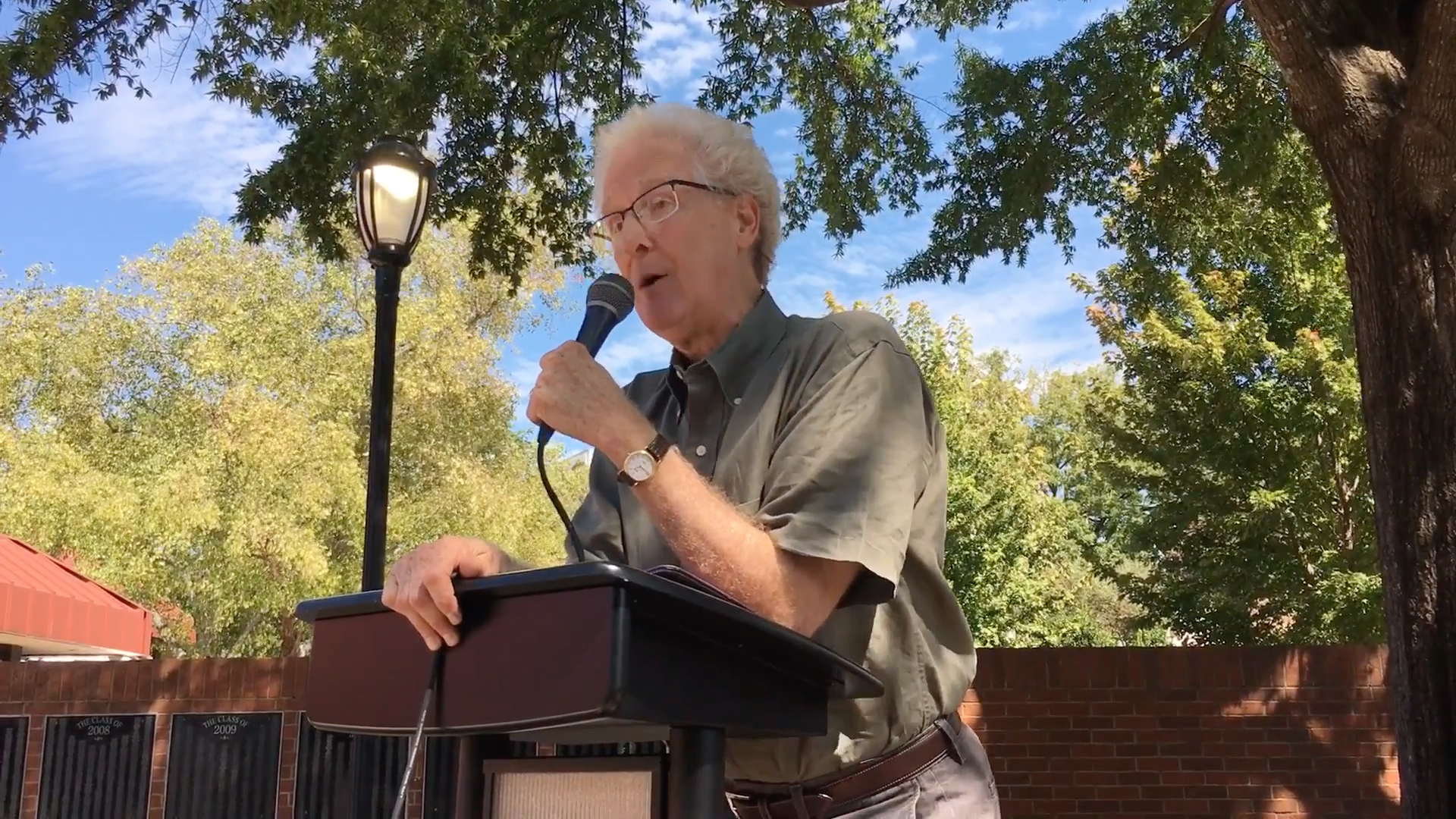 Winfield speaking at an anti-Trump rally at the University of Georgia. (Courtesy of Richard Dien Winfield / YouTube)

Richard Dien Winfield is quick to point out that he was born in Queens, the same borough of New York City as Donald Trump. Now he wants to represent Athens, Georgia, and its rural, heavily conservative environs in Congress. “Republicans in this district were willing to support someone with no Georgia roots, a guy from Queens, talking about bringing jobs back to America,” he reasoned, so why not him?

Winfield’s slogan for his campaign is “Guaranteed Jobs, Fair Wages.” He appears to be the first candidate in the 2018 cycle to run on a federal guarantee of a job for every able-bodied American adult who wants one. Winfield, a philosophy professor at the University of Georgia for 35 years and the author of The Just Economy, will kick off his campaign the weekend before the Martin Luther King holiday, and that’s no accidental timing. King endorsed “employment for everyone in need of a job” during the civil-rights era, and his widow, Coretta Scott King, co-founded the National Campaign for Full Employment in 1974.

“After winning back political and civil equality, King realized a new chapter had to be opened, the struggle for economic rights,” Winfield said in an interview. “King wanted to transform the entire society so everyone could benefit. That struggle has fallen into oblivion.”

The district, Georgia’s 10th, is currently represented by Republican Jody Hice. He didn’t have an opponent in 2016, which was true for a shocking number of Republican officeholders in the state. And Trump easily carried the district. But this era of resistance has brought out a new crop of Democrats. Most foreground the need to reverse the president’s destructive policies. Few speak about comprehensive policy frameworks that would truly change America. For this reason, Richard Dien Winfield’s long-shot bid is drawing attention from academics and activists who have longed for big ideas.

“A new social bill of rights could help transform the political and economic discussions we’re having in this country,” said Mark Paul, a visiting fellow with the Roosevelt Institute who has co-authored some of the major job-guarantee studies. “Richard Dein Winfield could deliver model legislation, setting a viable path towards achieving full employment and economic security for all.”

Progressive economists have latched on to the idea of a federal jobs guarantee, a Depression-era chestnut associated with programs like the Civilian Conservation Corps and the Works Progress Administration. Under this concept, the government would provide jobs with a decent wage and benefits similar to those enjoyed by public-sector workers. The open-ended program would be funded as needed, expandable in recession, and contractable when the economy recovers. Government would effectively become the employer of last resort.

It’s become a hot topic among those looking to solve persistent underemployment, rampant inequality, and stagnant median wages. Even the mainstream Democratic Center for American Progress proposed a small-scale version of a jobs guarantee recently. But Winfield takes this to another level, seeking a national jobs program with a $20-an-hour “fair wage” that would be indexed to the productivity workers contribute.

Winfield, whose white shock of hair leaves you wondering if he’s Bernie Sanders’s long-lost cousin, believes a jobs guarantee would solve a host of the country’s problems at once. “It’s really the anchor of economic independence and security, which we all need to exercise other rights,” Winfield said. First, he explained, the program would be a lifeline to minorities and youths, who typically see far higher unemployment rates than the general population. Second, it would emphasize fulfilling community needs that the private sector has neglected. Winfield cited as examples increasing clean-energy infrastructure; bringing broadband Internet service to all (an issue in his rural region akin to electrification through the Tennessee Valley Authority in the 1930s); renovating and replacing affordable housing; increasing public transportation in rural and urban areas; building and staffing public health, childcare, eldercare, and recreational facilities; and even creating public art.

The resulting economic security and the dignity that comes with being productive would revolutionize how Americans live, Winfield believes. “People suffering from intergenerational poverty will know they have a job waiting for them,” he said. “It could help end recidivism by giving ex-convicts opportunities. And it could play a tremendous role in eliminating fear of immigrants inflamed by fear of joblessness. The only way for comprehensive immigration reform is to have this.”

Workers with private-sector jobs could benefit from tight labor markets and more bargaining power. Eliminating the fear of losing a job could create more courage in the workplace, more willingness to stand against discrimination or sexual harassment, or join a union. Even businesses could prosper from a nation full of people with money in their pockets, willing to spend.

The idea grew out of Winfield’s long-standing commitment to social justice. He helped organize janitors in college at Yale, and sugar-cane plantation workers with the Southern Tenant Farmers Union in Louisiana. His philosophical work has always had a socio-political cast, seeking to model a society that offers real freedom and justice. He casts his jobs-guarantee platform as “the unfinished business of the civil-rights movement.”

“I am thrilled to see someone like Richard Winfield run on a bold progressive platform in this county,” said Mehrsa Baradaran, an associate professor at the University of Georgia and author of The Color of Money, a history of black banking. Baradaran, who has consulted with Winfield on drafting his agenda, noted that Clarke County, Georgia, where Athens sits, has one of the nation’s highest wealth disparities. “These are serious issues that need to be addressed.”

Others in the job-guarantee movement have taken note. “A true jobs-guarantee bill hasn’t been introduced in Congress yet,” said Mark Paul. “Winfield is offering a positive alternative, embracing an economic populist vision which would ensure everybody in the US a decent standard of living.”

Whenever you call for a large-scale government program in a district fed a steady diet of Fox News demonization about how the government can’t do anything right, it’s an challenge. “My main strategy is really to push the idea of jobs, and how the solution requires government intervention,” Winfield said. He believes that conservatives’ strategy of segmenting society to pit lower-class whites against minorities allegedly getting “free” handouts goes away when everyone can access a job. “I’m not talking about putting people on welfare, I want people to realize the American dream of supporting themselves through their own hard work,” he explained.

The question becomes how you convince those skeptical of government before seeing the tangible results. But Winfield thinks rural communities, where capital flight has led to lack of business formation and job growth, could brighten to his message. “There’s an advancing situation of growing economic insecurity,” said Winfield. “People want some kind of relief, even by turning to scapegoats. If a candidate puts out a real alternative, I think it can have an impact.”

That alternative, some hope, could prove a spark to other candidates to be unafraid of transformational change. “We should put our best foot forward by running authentic candidates who run on truly big ideas that would be game changers in people’s daily lives,” said Adam Green, co-founder of the Progressive Change Campaign Committee, whose training for new candidates Winfield attended last July along with 300 other hopefuls.

Reality does need to intrude here. Trump beat Clinton in this district 61-36. It would be a stunning upset for Winfield to win, should he get through the Democratic primary. But 2018 is shaping up as a wave election. And last November, Democrats Deborah Gonzales and Jonathan Wallace picked up two legislative seats in the district where Republicans were heavily favored.

As important as it is to run candidates everywhere, what they actually propose matters. The Winfield campaign is a kind of experiment in whether offering a way out of the constraints of modern capitalism can lead to electoral success. “The Constitution has civil and political rights, but doesn’t have social and economic rights,” Winfield said. “No Democratic pres since the 1960s has done much of anything to pursue that struggle. We will be the future of the party.”