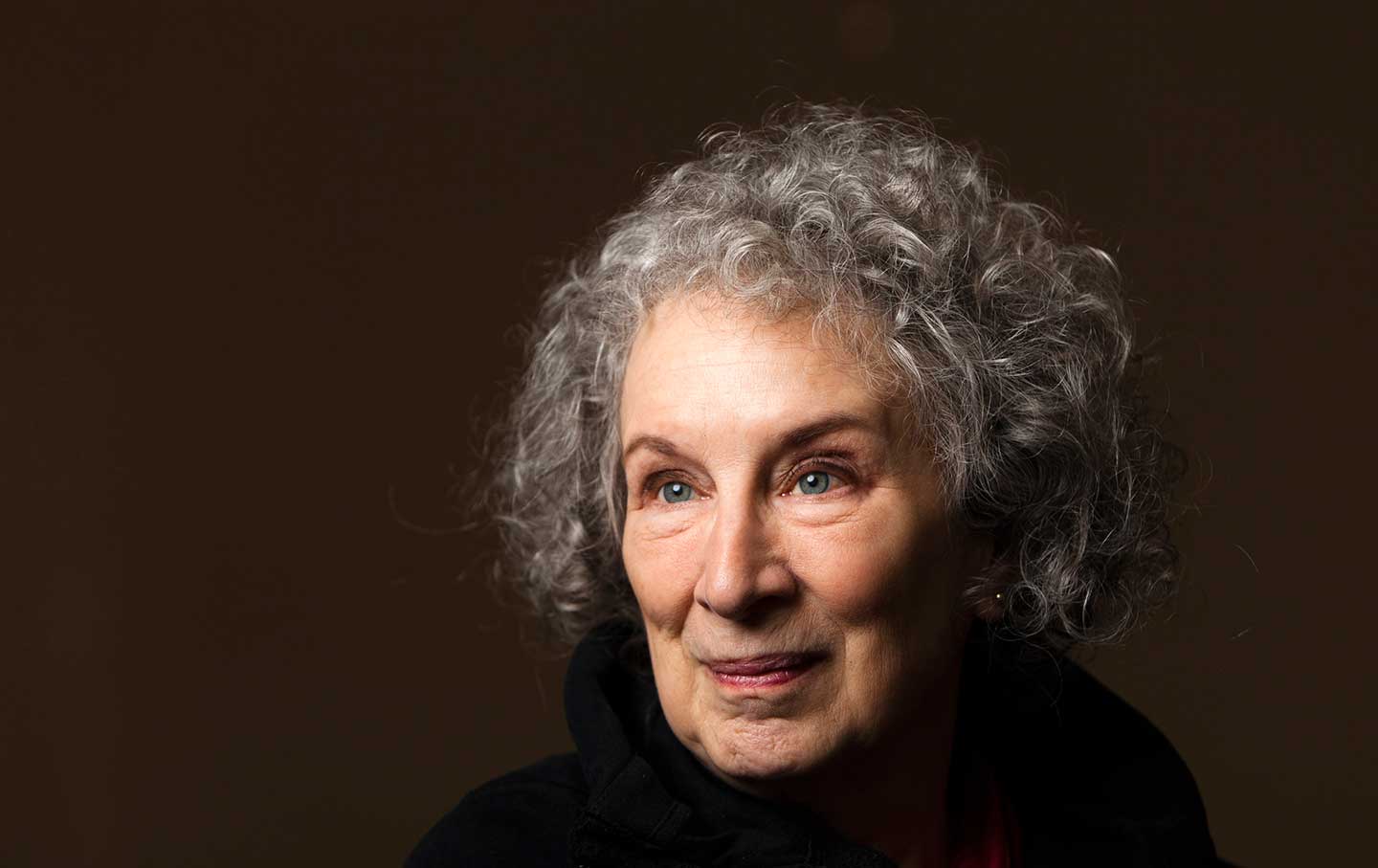 Margaret Atwood’s The Handmaid’s Tale is a story about the United States after a coup has abolished democracy and established a theocratic and patriarchal dictatorship. The book has been translated into more than 40 languages. Now it’s a Hulu miniseries starting on April 26, starring Elizabeth Moss. Margaret Atwood has written more than 40 other books—fiction, poetry, and critical essays. This interview has been condensed and edited.1

Listen to Margaret Atwood on the Start Making Sense podcast.

Jon Wiener: The Handmaid’s Tale is the first work of feminist dystopian fiction ever featured in a Super Bowl ad—congratulations!2

Margaret Atwood: I think it’s the first work of fiction period that was ever featured in a Super Bowl ad.3

JW: I think so. Those ads are mostly beer and cars.4

MA: There you go. Good company.5

JW: And congratulations to you and Hulu for getting this on TV during Trump’s first 100 days. That’s quite an achievement.6

MA: I think it was a coincidence, because they started planning the series quite a long time before the election. Elizabeth Moss signed in April of 2016, and they started filming in September of 2016. The election gave it much more relevance.7

JW: The LA Times called the Hulu Handmaid’s Tale “shockingly relevant” in the age of Trump, but I don’t think you were thinking about Donald Trump when you wrote it, were you?8

MA: I was not thinking about Donald Trump back in 1984 when I started writing it. I was thinking about dictatorships of the 20th century, and also about what people were talking about doing in the United States at that time—about which of recently acquired women’s rights they’d like to abolish.9

JW: The week that Trump took the oath of office, you wrote a piece for The Nation on the subject of the obligations of the artist in the age of Trump. You looked at the argument that artists and writers have a special responsibility to speak truth to power.10

What Art Under Trump?

JW: I thought you had a wonderful argument where you said, “Artists are being lectured on their moral duty. How come other professionals aren’t?”12

MA: Yes: What about the dentists? What about the obligations of dentists in the age of Trump? Stand up for dentistry. I don’t think dentistry is actually being threatened yet, although it might be soon.13

JW: What kind of artistic responses to Trump might be possible? Of course, we have lots of satire that makes fun of Trump.14

MA: That’s interesting and funny to those on a certain side of politics, but I don’t think that Charlie Chaplin’s satire of Hitler stopped Hitler from starting World War II, did it? So what kind of art is likely to come out of the Age of Trump? If nothing else, I would say the art of witness, people making a record of the times we live in. But the times we live in are so volatile, and so changeable, you don’t know from one week to the next what this administration is likely to do, or say. I think people just haven’t got a grip on it yet.15

JW: You went to one of the women’s marches the day after Trump’s inauguration. What was that like?16

MA: The one in Toronto. It’s not actually our president, but people were marching in sympathy, showing support for people south of the border. People all over the world did that. What happened with all of those gatherings was they were a lot bigger than people thought they were going to be. In Toronto, there was this huge mass of people. I’m not sure that much marching took place because it was hard to move. Also you couldn’t hear anything. You couldn’t hear any of the speakers, but you were there. I saw a lot of interesting signs—17

JW: Tell us about the signs.18

MA: The signs were great. I think my favorite sign was an older woman holding a sign that said, “After 60 years, why am I still holding this f-ing sign?” There were also a number of Handmaid’s Tale signs, a lot that said, “Make Margaret Atwood fiction again.” That wasn’t very encouraging to me personally.19