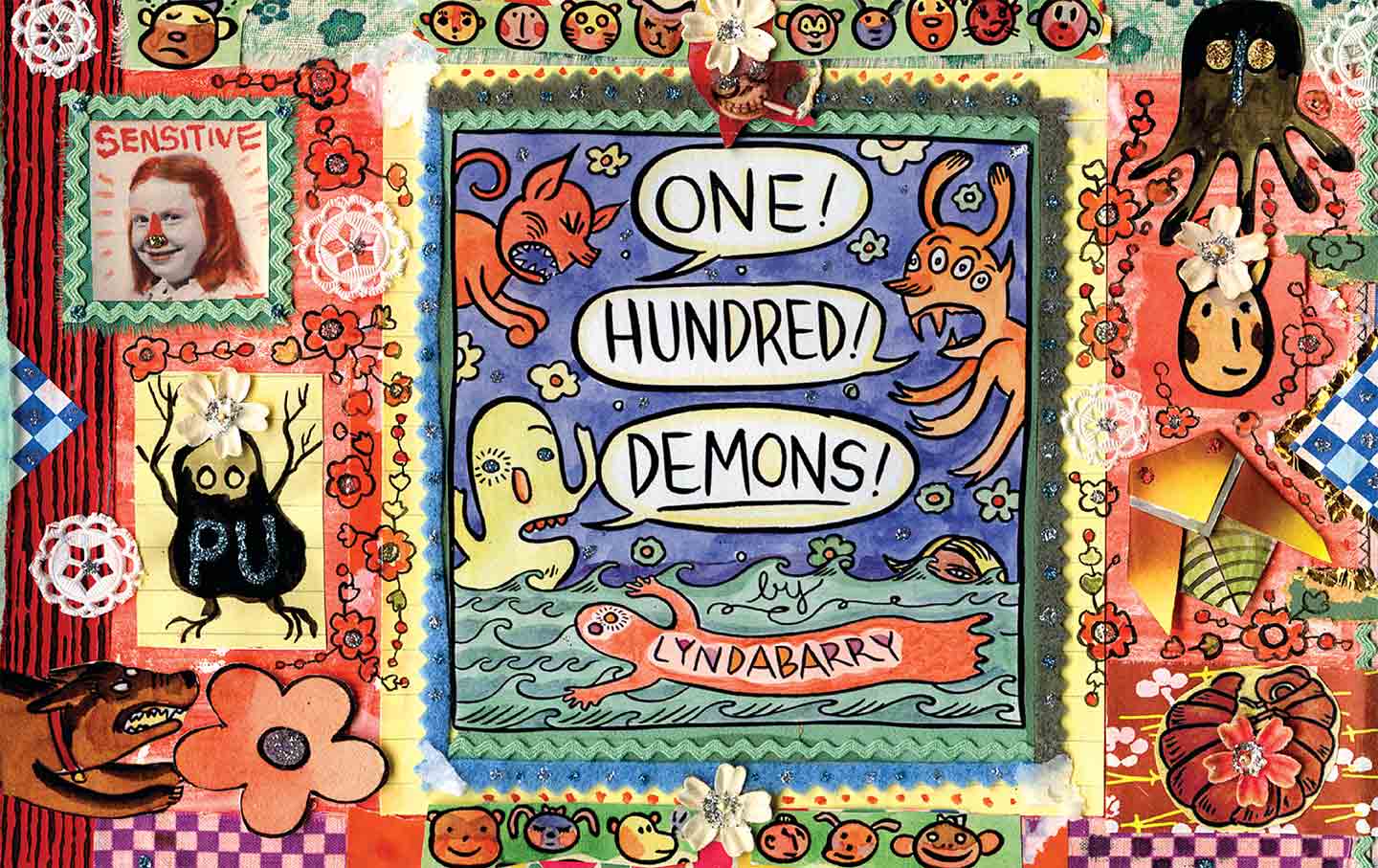 Lynda Barry is the most democratic artist I’ve ever met, so I feel sure she’d bristle at being elevated to the status of genius. But now she’s stuck with the title. Last Wednesday, Barry became one of 25 winners of the MacArthur Fellows Program, worth $625,000 and popularly known as the “genius grant.” According to the John D. and Catherine T. MacArthur Foundation, Barry’s award is for “Inspiring creative engagement through original graphic works and a teaching practice centered on the role of image making in communication.”

The “teaching practice” is a reference to Barry’s famous classes in writing and cartooning, which she offers both as an associate professor of interdisciplinary creativity at the University of Wisconsin–Madison and also as a widely traveled workshop speaker. The paradox is that Barry is undeniably a genius but her key brilliance is her ability to spark creativity in almost anyone. Genius implies hierarchy, but Barry’s most passionate conviction is that creativity is hardwired into all of us, although it often goes dormant after childhood.

Barry has taught in the toniest of universities—but also in prisons. Her students, broadly defined as those who have been nurtured by her teachings, run the gamut from retired postal workers to Pulitzer Prize winners. I once heard the cartoonist Art Spiegelman speak with a hushed awe about how pep talks from Barry helped him overcome an artist’s block.

I was lucky enough to sit in on some of Barry’s classes when she was visiting teacher at Haverford College in 2009. It was a remarkable experience: part vaudeville (she’s prone to breaking out into song and getting the class to join), part motivational lecture, part creative writing exercise, part group therapy session, and part trippy meditation on memory and play. The workshop was the most mind-altering experience you can have without dropping LSD.

Much of Barry’s energetic classroom performance is set with the goal of disarming students, making them comfortable with opening up about their own experience and realizing that their own stories, however offbeat and unusual, can be the stuff of art. When she was young she was inspired by the underground cartoons of Robert Crumb, an artist who seemed to put his unadulterated id on the page. Even though she found some of his sexual images disturbing, the example of candor was worth following. “What R. Crumb gave me was the feeling that you could draw anything,” Barry told comics scholar Hillary Chute in a 2009 interview.

Barry’s own art and her teachings have the effect on others that Crumb had on her: They give permission to be honest. This is particularly valuable for working-class and minority students, who feel shut out of official culture that seems alien to their experiences. As she told The New York Times in 2011, “I have a real chip on my shoulder about that—the idea that some things aren’t art. It’s from growing up poor. You run into that your whole life—people of my background and education can’t participate.” 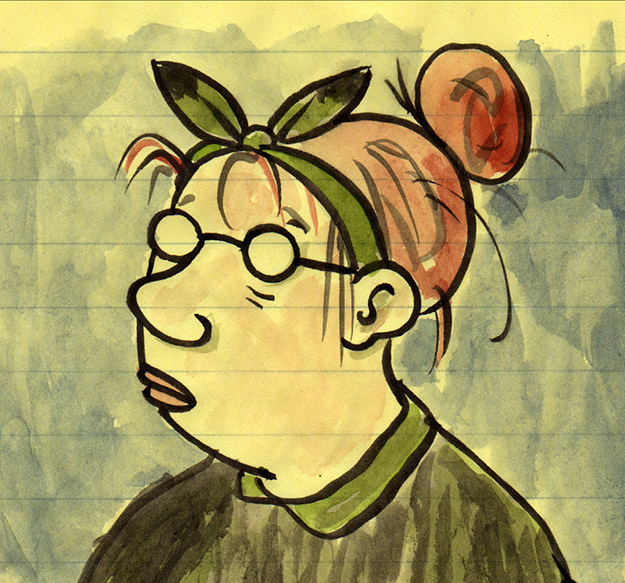 I don’t write fiction, but even as a journalist I found Barry’s advice heartening and enriching. Barry taught me that words and images aren’t abstract things that exist apart from me but rather living presences inside my mind. Creativity is learning to tap into those living presences, which are tied up in our memories, to respect them, cultivate them, make peace with them and enjoy them. Creativity also means learning to have the courage of your own eccentricity and not being embarrassed by thoughts that seem weird.

Barry practices what she preaches in her own work, a rich and varied body of cartooning, writing, and performance art that is held together by a singularly demotic sensibility.

She was born in 1956, her father was an Irish-Norwegian meat cutter and her mother an Irish-Filipino hospital cleaner. Her Filipino background loomed large in her childhood, with Tagalog the language of the household. But Barry herself, along with her brothers, were seen by the outside world as white. As she once explained, “People can’t believe I’m Filipina, but then I tell them I’m also Norwegian, and Norwegian blood can suck the color out of everything.” 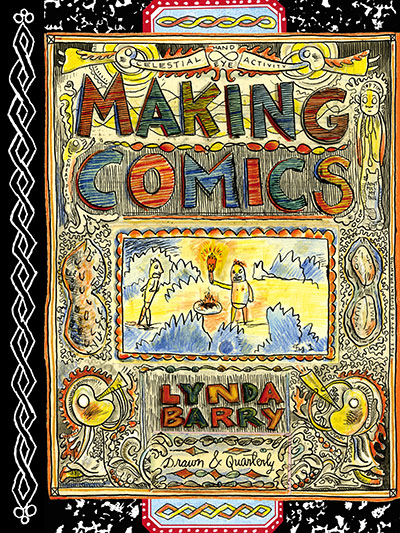 The ambiguity of growing up in a racially mixed household while appearing as white to the outside world has shaped much of Barry’s work. As she explained to Hillary Chute, “In the Filipino side of my family, my mom’s the only one who married someone white, so my brothers and I look just like we look, and all my cousins and everyone else looks very Filipino, and the difference this makes is unbelievable. I mean I know this is a get in through the door free anytime you want. I mean it’s unbelievable to have this skin, and then to grow up in this whole other way.”

In her cartoons and in her novel The Good Times Are Killing Me (1988), Barry often draws on the experience of growing up in a multicultural West Coast neighborhood where kids of many races played together but became increasingly segregated as they grew old. There are few American artists who have dealt with the lived reality of race with such sensitivity and empathy.

In both her prose work and her cartoons, Barry has the spooky ability to recreate the mental universe of children and teenagers. Her visual style—mixing atavistic cartoons with collage images—is itself potently evocative of childhood. One of my favorite Barry books is One Hundred Demons, a series of cartoon vignettes in the liminal space where autobiography meets fiction. “Is it autobiography if parts of it are not true?” she asks in the beginning. “Is it fiction if parts of it are?”

Each section of the book deals with a different uncomfortable memory. One chapter is on smells. “I have always noticed the smell of other people’s houses, but when I was a kid I was fascinated by it,” Barry recalls. “No two houses ever smelled alike, even if the people used the same air freshener. Some of the smells were uncomplicated, like the cat pee smell of the house next door. The lady had 14 cats. It was hard to stay and visit. She sometimes burned incense which also smelled like cat pee.”

We’ve all been in that cat pee house. And many of us, after reading Barry and looking at her vibrant art, will be inspired to mine our own memories of cat pee houses for whatever creative or emotional sustenance we need. Barry is not only a genius herself but an encourager of genius in others.