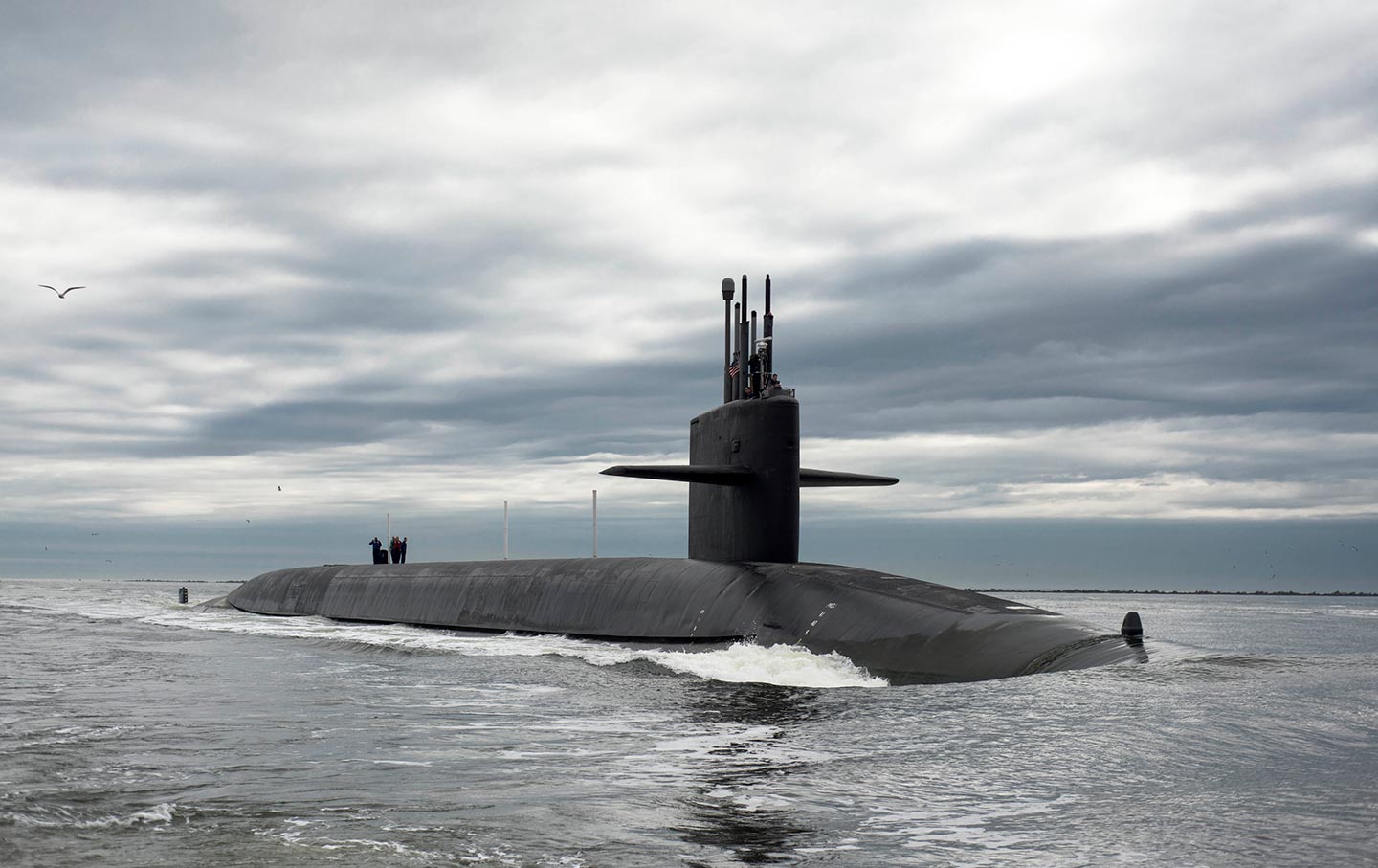 The Ohio-class ballistic missile submarine the USS Tennessee returns to the Kings Bay naval base in Georgia in 2014. The Kings Bay Plowshares 7 broke into this same base four years later to protest the US nuclear program. (Reuters / Mass Communication Specialist 1st Class James Kimber / US Navy / Handout)

On October 21, the trial of the Kings Bay Plowshares 7 began in Brunswick, Georgia. A year a half before, on April 4, 2018, this group of seven Catholic peace activists had entered the Kings Bay military facility—which stores much of the US government’s Trident nuclear arsenal—in St. Marys, Georgia. They spray-painted messages on walls and sidewalks, spilled small bottles of their own blood, and hammered on the monuments to nuclear weapons that had been erected at the base. The activists were willingly arrested two hours later; some were held in jail for more than a year afterward. As they stood trial this month, the Plowshares insisted that, in the face of the threat that the US nuclear arsenal poses to the world, what they had done was not illegal. Their actions were intended as “symbolic disarmament”—an act of civil resistance.

“The government has set up a religion of nuclearism,” said activist Elizabeth McAlister—cofounder of the Baltimore resistance community Jonah House with her late husband, Philip Berrigan—before the trial began. “It is terrifying and dead, dead wrong. It is a form of idolatry in this culture.”

But on October 24, in the US District Court for the Southern District of Georgia, all seven activists—Father Stephen Kelly, Mark Colville, Clare Grady, Martha Hennessy, McAlister, Patrick O’Neill, and Carmen Trotta—were deemed guilty of conspiracy, destruction of property on a naval installation, depredation of government property, and trespass. They could each face more than 20 years in prison. 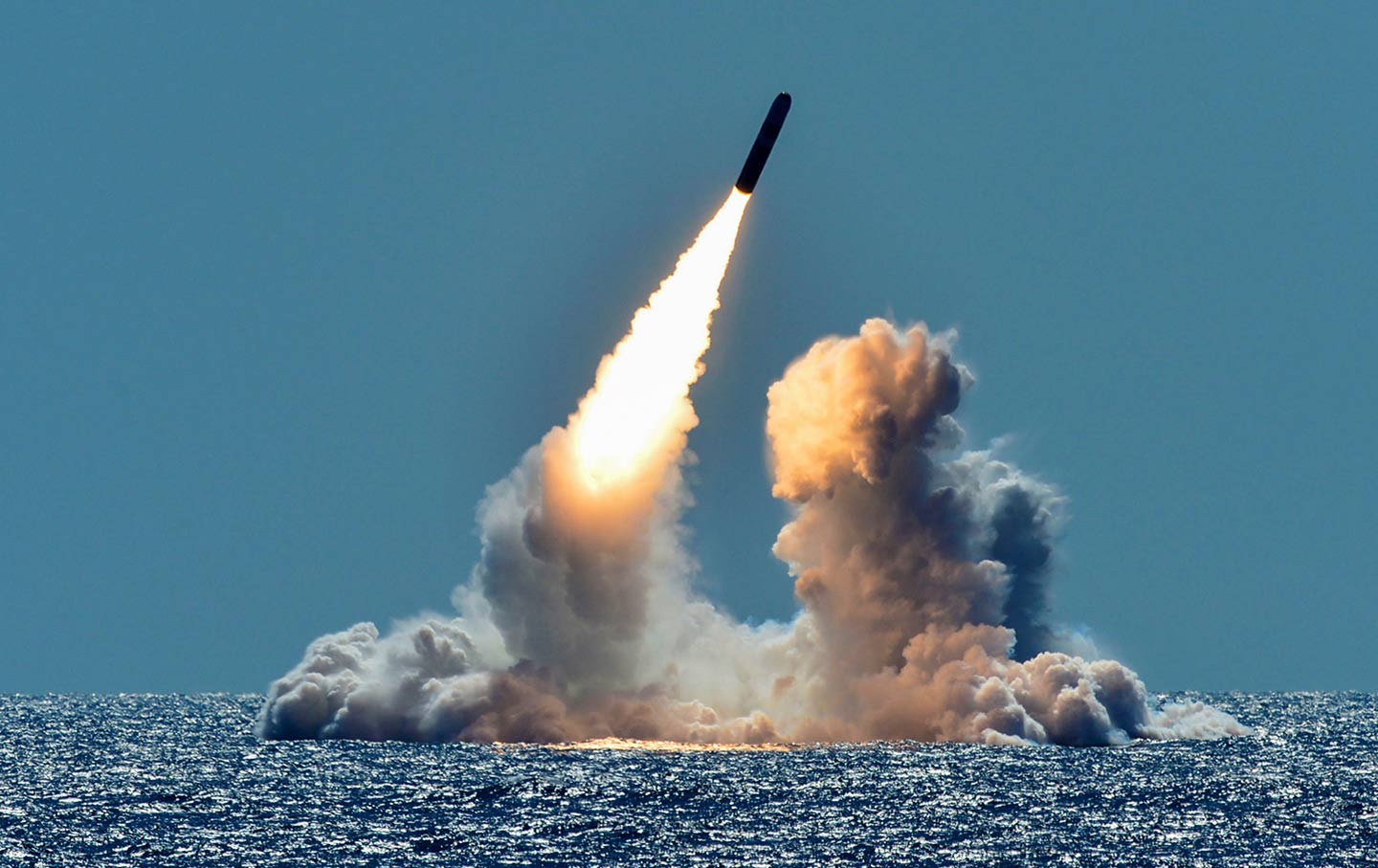 In her testimony, Clare Grady, of the Ithaca, New York, Catholic Worker community, had tried to explain to the jury the motivation and urgency of their protest: The group had wanted to show that the US government’s nuclear weapons are like a gun pointed at the head of the planet. But as she spoke, she had a series of legal guns pointed at her own head. She and her fellow defendants had been threatened with charges of contempt of court if they disobeyed the edicts of the judge, Lisa Godbey Wood, who had already ruled that they could not invoke arguments of justification, necessity, or international law. Thus, a sort of legal brinkmanship ensued throughout the trial, with frequent vigorous objections from the prosecution, as well as sidebars with the judge and litigants.

Grady pleaded with the members of the jury to act according to their own consciences; the jury still handed down its guilty verdicts in under two hours. Throughout the proceedings, Father Steven Kelly—a Jesuit priest who is the only defendant still locked up—sat quietly in his jail uniform, never rising for the judge or jury and saying barely a word.

During the trial, Trotta told the jury that after entering the base in 2018, they had looked over the bunkers that housed the Trident missiles: “Each one of them the equivalent of a mass grave…and that’s an understatement.” But it was unclear whether the jury understood that there really were weapons housed at Kings Bay—especially because Wood allowed prosecution witnesses who worked at the base to state under oath that they could “neither confirm or deny” the existence of nuclear warheads at the base.

On the stand, Special Agent Thomas Kenney of the Naval Criminal Investigative Service produced photo after photo of Kind bar wrappers, spray paint cans, hammers, and even the actual fence that the activists had cut to get into the base. The activists had openly admitted to entering the site, but that wasn’t the point of Kenney’s prolonged testimony: The prosecution was aiming to depict the defendants as vandals.

The activists had also left behind a copy of Daniel Ellsberg’s 2017 book The Doomsday Machine: Confessions of a Nuclear War Planner at Kings Bay. But when Assistant US Attorney E. Greg Gilluly held up a copy of the book during his closing arguments, it was to declare that it was admissible as evidence only because it was left at the base; the content of the book would not be considered. The same stipulations were made for an indictment of the Unites States’ nuclear program that the activists had posted online immediately upon completing their action at the base.

The content of Ellsberg’s book was not the only defense ruled inadmissible by Wood. Francis Boyle of the University of Illinois had submitted an extensive legal declaration in defense of the activists, noting that binding US treaties are “the supreme law of the land” under Article VI of the Constitution. But late on October 18—the Friday night before the trial would begin the following Monday, October 21—Wood had ruled against the use of international law as a defense. This meant no reference could be made to a condemnation of nuclear weapons from the International Court of Justice, though such arguments had been employed at previous Plowshares trials. In his closing arguments on October 24, Gilluly demanded that the jury render a verdict based on US law, “not some other law that someone else wants to believe in.”

Also excluded by Wood was the affidavit filed by Ellsberg in support of the Plowshare activists, arguing that the defendants were justified in their actions because they are attempting to prevent a far greater evil: that of nuclear war and “omnicide.” Ellsberg also highlighted the history of civil disobedience—or, as the Plowshares activists prefer to call it, civil resistance—echoing testimony from Howard Zinn in a Plowshares trial from the 1980s.

Instead of hearing from Ellsberg and other experts on the side of the defense, the jury heard Assistant US Sttorney Karl Knoche deriding Grady, saying that it was as if she thought she should get to “decide to run red lights”; he accused her of being a “bully,” even as he attempted to convict her on charges that could lock her up for decades. In response, Grady’s codefendant Mark Colville testified that he had run every single red light when he drove his wife to the hospital to give birth. And Grady herself cited a statement from Martin Luther King Jr.: “When a fire is raging, the fire truck goes right through that red light, and normal traffic had better get out of its way.”

Martha Hennessy’s testimony initially seemed as if it might be a high point for the defense: To the palpable relief of their supporters filling the pews, one of the Plowshares was finally able to speak meaningfully about their religious motivations. Hennessy talked about her grandmother, Dorothy Day—the famous founder of the nonviolent Catholic Worker movement, who is currently up for sainthood—and the Workers’ engagement with the poor. Hennessy spoke about how Day had given her a book on the Hiroshima bombing as a child, how she had opposed nuclear weapons, and more. Nonetheless, Wood continued to block the defendants from drawing any empirical connections between their direct action at Kings Bay and the threat of nuclear weapons; Hennessy was not even allowed to speak about how she worked with victims of atomic bombing as an occupational therapist.

Pope Francis condemned the possession of nuclear weapons in 2017, and Cardinal Joseph W. Tobin of Newark issued a statement of support for the defendants. Still, the Kings Bay Plowshares 7 were unable to mount a defense based on the Religious Freedom Restoration Act, the first attempt to do so in a Plowshares case; Wood cited the US government’s “compelling interest” in continuing the prosecution, in spite of the group’s religious motivations. The defendants spoke in general terms about their faith in connection with their protest. When Patrick O’Neill cited Jesus’ driving the money changers from the temple, the prosecution objected, and Wood quickly sustained. Still, by invoking their sincere religious beliefs throughout the trial, the defense ensured that the case was not just about their bolt cutters.

After the lengthy verdict was read—finding the defendants guilty of three felonies and one misdemeanor—there was not a sound in the packed courtroom. As the community of supporters from around the country went to the hallway, wailing began. Then the supporters began to sing, “Rejoice in the Lord always—and again I say, rejoice!” Bill Quigley, an attorney for McAlister, said an appeal was almost certain. Sentencing is expected in 60 to 90 days.