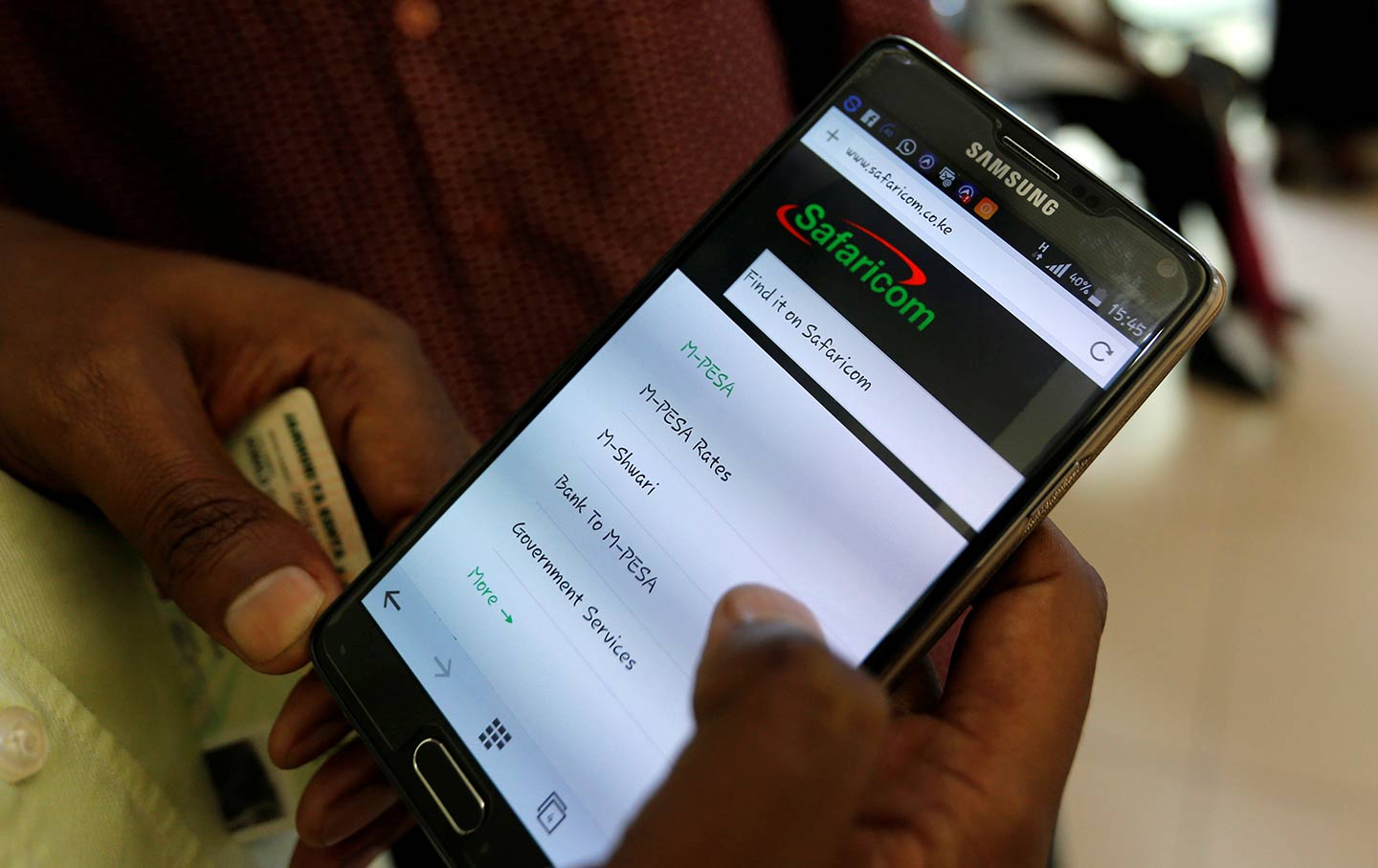 An employee assists a customer to set-up M-Pesa money-transfer service on his handset. (Reuters / Thomas Mukoya)

Near the center of Kibera, the biggest shantytown in Nairobi, and in Africa, Maureen Nyambura, 23, sells telephone cards and handles money transfers from a corrugated iron kiosk at a crossroads. It’s barely a meter square, with a tiny service counter. She has many competitors: In the past decade, mobile phone and banking services such as Airtel and Safaricom have proliferated across Kenya.

Translated by George Miller.
This essay continues our exclusive collaboration with Le Monde Diplomatique, monthly publishing jointly commissioned and shared articles, both in print and online. To subscribe to LMD, go to
mondediplo.com/subscribe.

A customer handed her a 1,000 shilling note ($10), and she quickly transferred the money to a phone number using M-Pesa (“m” for mobile, “pesa” for money in Swahili), an electronic wallet developed in 2007 by local software engineers. This technology has caught on in eastern and southern Africa, as it allows people without bank accounts to deposit cash at any Safaricom service point, to be used to pay bills or make mobile-phone transfers. This facility gives poor Kenyans access to basic financial services, so they can send money to relatives in rural areas. That would not otherwise be possible, since here, as in the rest of Africa, traditional commercial banks refuse to let the poorest open accounts, and charge more than mobile banks for their services. Between 2006 and 2016, the percentage of Kenyans with access to banking services went up from 20 percent to 80 percent, since the only requirement is a phone.

Africa has embraced mobile telephony, leapfrogging the historic stage of large fixed-line networks in industrialized countries. With the electronic wallet, the continent that is least integrated in world trade is for once ahead of the game, even compared to the West. There are 49.7 million Kenyans, and 26 million of them use mobile banking in an economy that is still largely informal; their access to financial services also includes loans. The commission on every transaction means M-Pesa contributes quarterly net profits of $250 million to Safaricom, a Kenyan company launched in 1998 that has 67 percent of the local market and a quarterly turnover of around $1 billion. Since 2000 the UK firm Vodafone has held a 40 percent stake in Safaricom.

Alcohol delivered to your door

Nyambura earns about $285 a month, over twice the average local wage ($117). She’s saving up to attend a teacher-training college, but, as the fees are almost $4,000 a year, that is a long-term plan. But she’s optimistic, since she has customers at her booth all day. 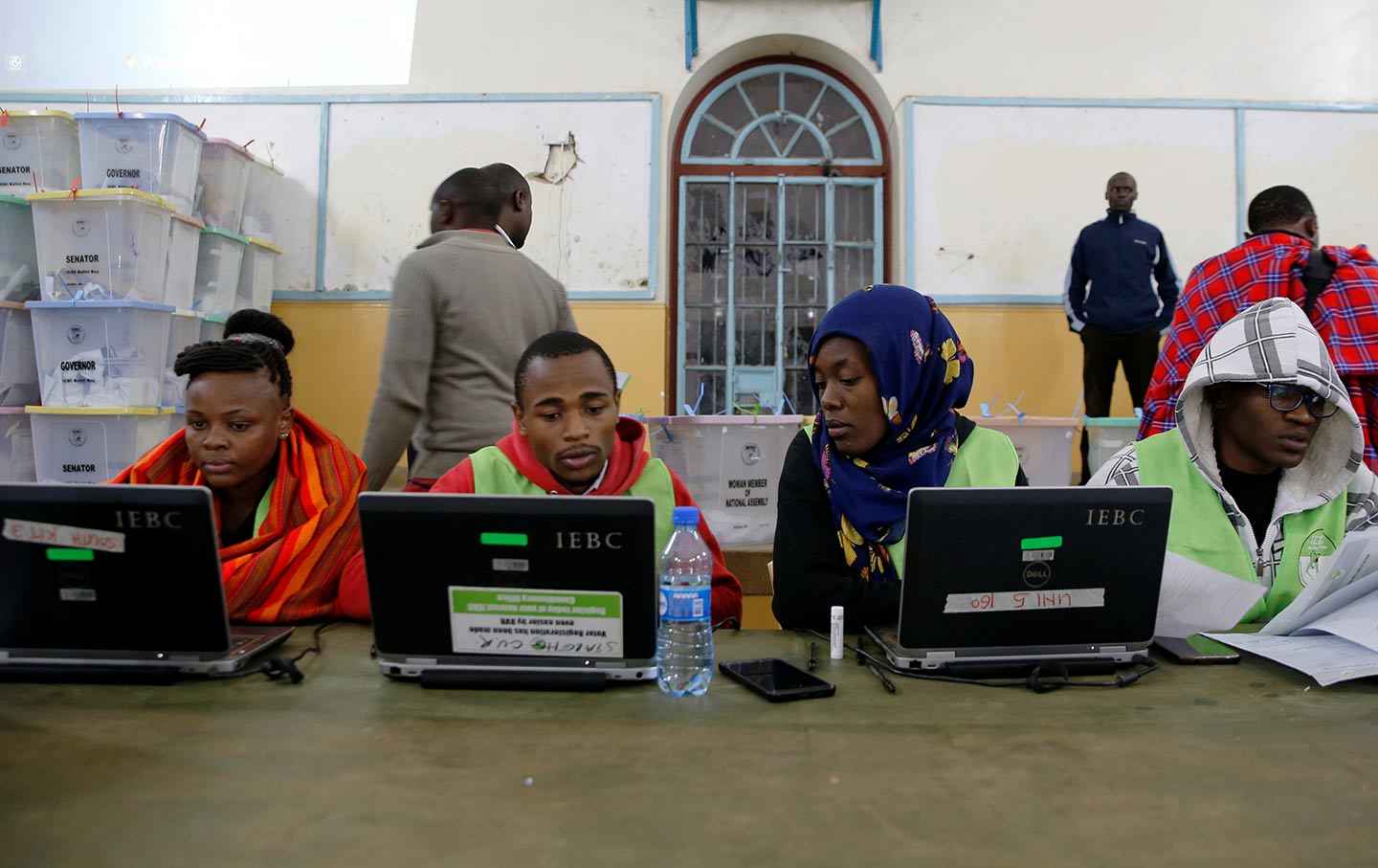 Across town, in the smart Westlands district, a group of women enjoying drinks on the balcony of an apartment block ran out of sparkling wine. The hostess tapped an order to an online drink retailer into her smartphone. Anyone with a Chupa Chap account can have alcohol delivered to the door by the “fastest delivery in the city,” no small claim since Nairobi is a city of 3.5 million and has appalling traffic. The hostess grew impatient after 10 minutes, but a motorcycle courier soon showed up with her prosecco ($12.50 a bottle). Deliveries don’t arrive as fast in London or Paris.

When the film Black Panther played to full houses this spring at Nairobi’s city-center Imax, all the ads preceding the 3-D screening were for information and communication technology, promoting the latest smartphones and apps. It felt as if the Afro-futurism of the Marvel movie’s background had already arrived in Kenya. Nearby, in the Masai market, women selling necklaces enthused over a tourist’s iPhone 5; they wanted even this outdated model, though it would have been well beyond their means.

From a distance, Kenya’s new technology seems impressive. With many forums such as ICT Innovation, NexTech Africa, Women in Tech Africa, and Agritec Africa, offshore call centers and the Silicon Savannah project, the country looks like a model and inspiration for others, such as neighboring Rwanda.

The Silicon Savannah project—officially Konza Technology City (KTC)—has been going since 2013. The nearly 5,000-acre site is almost 40 miles from Nairobi en route to the port of Mombasa, and the government claims it will make Kenya Africa’s digital hub; 20,000 homes, a university, and a state-of-the-art hospital are planned for this smart city, which is as yet virtual—so far, only one apartment block has been completed. The project has an estimated budget of $15 billion; 10 percent of this is to come from the state, the remainder from foreign investors, but to date, only a South Korean university and the Chinese Huawei group have signed up. KTC, which is part of the government’s Kenya Vision 2030 strategy, aims to create 20,000 jobs within five years and 200,000 longer-term to turn the country into an emerging nation.

But government decrees cannot manufacture a technology boom or investor confidence. There is skepticism in Kenya about Silicon Savannah, and even the architect of the project, Bitange Ndemo, has criticized its slow implementation and red tape. “To most Kenyans, Konza City is a white elephant, which ultimately will only benefit foreign companies and the government,” says Kahenya Kamunyu, founder of Able Wireless. “It’s a brilliant idea, but it’s come at the wrong time. We should be more concerned with building infrastructure that would then enable Kenyans to realize major projects.” University of Nairobi design-school students have no access to 3-D printers.

Defending its plans, the government says that new technology already represented 10 percent of GDP in 2017; it has grown significantly since 2009, when The East African Marine System (TEAMS), an underwater fiber-optic cable, was laid between Kenya and the United Arab Emirates. This $82 million project initiated by the Kenyan authorities aims to reduce dependence on a cable controlled by South Africa. TEAMS provides the fastest Internet connections on the continent, albeit at a cost of between $30 and $85 a month, too much for most Kenyans.

In high-tech Kenya, 75 percent of Internet users rely on slow, costly services provided by cybercafés. The DigiSchool project, a key electoral promise in the 2013 presidential elections, was supposed to put a million laptops into Kenya’s 24,000 primary schools. Rollout has been slow; 20 percent of schools still lack electricity and some have no desks.

Kenya’s poverty rate did decline between 2005 and 2016; the share of the population living on less than $2 a day fell from 43.6 percent to 35.6 percent. According to Tavneet Suri, an economist at the Massachusetts Institute of Technology who has studied the impact of M-Pesa since its launch, it helped 194,000 households (2 percent) out of extreme poverty between 2007 and 2011. But this innovation did not resolve structural economic inequalities.

As elsewhere in Africa, the growth rate (5.5 percent), even supported and encouraged by the service sector, has not led to significant economic takeoff. The unemployment rate remains high (11 percent according to official statistics, 39.1 percent according to the UN) and new jobs created are often precarious, in what is one of the world’s most unequal societies. The key inhibiting factors are underinvestment in education and health and the lack of private-sector job creation.

Productivity remains low in industry (17 percent of GDP) and agriculture (35 percent). The company that developed the iCow app boasts that it enabled its 580,000 users, small farmers with a few cattle, to better track their animals’ gestation and improve their milk production and thus their income. “Farmers get real-time updates on the market rate for products. But their phones don’t solve the problem of lack of road infrastructure to let them reach those markets, or the lack of food manufacturers to process their products on site,” says Ken Mwangi, an agritech teaching assistant at the University of Nairobi.

The Ushahidi app (“testimony” in Swahili) is one of Kenya’s most significant new technology success stories. This free crowdsourcing and situation-awareness app was developed to allow real-time tracking of political violence during 2008’s post-election crisis. The conflict, which developed into interethnic violence between supporters of outgoing president Mwai Kibaki and those of his opponent Raila Odinga, led to 1,200 deaths. The app makes it possible to track hotspots and has been put to 22,000 different uses in 154 countries, for example to locate victims of the Haiti earthquake or identify roads blocked by snow in Washington, DC. It has enabled the not-for-profit Ushahidi company to thrive by charging development, humanitarian, university, and research organizations for use of its technology.

“The digital economy is just a tool”

But the app has not ended Kenya’s recurrent political tensions. With or without new technology (now also part of the debate), elections are still marred by violence. The supreme court gave a landmark verdict on September 1 2017, by invalidating the previous month’s presidential election, won by incumbent President Uhuru Kenyatta, who called the decision a “judicial coup.” The justices criticized the independent electoral commission for having declared the results on the basis of uncorroborated reports, and not authorizing access to its data servers, despite accusations of hacking and fraud.

Odinga, the main opposition candidate, judged subsequent electoral reforms inadequate and refused to take part in a second election in October 2017. He also called for a boycott of companies with links to the government. Among them was Safaricom; its sales fell in the west of the country, a region that is predominantly Luo (Odinga is Luo).

A businesswoman told me: “The digital economy is just a tool, not a panacea. Politicians can remain in power and make all the plans they like, as long as they let us get on with our business.” She works in “women’s agribusiness” and uses WhatsApp, very popular in Africa, for free phone calls and group texting. “The fetishization of entrepreneurship in Africa is the new neoliberal mantra,” says Ory Okolloh, co-founder of Ushahidi and Google’s former Africa policy director. “All you have to do is become an entrepreneur. They say, ‘There’s no electricity but you’ve got solar. Your roads are potholed, but you can use Uber in Nairobi.’ That diverts us from the real problems: You can’t be an entrepreneur in a badly run country. It’s true there’s growth in Africa, but not for Africans.”