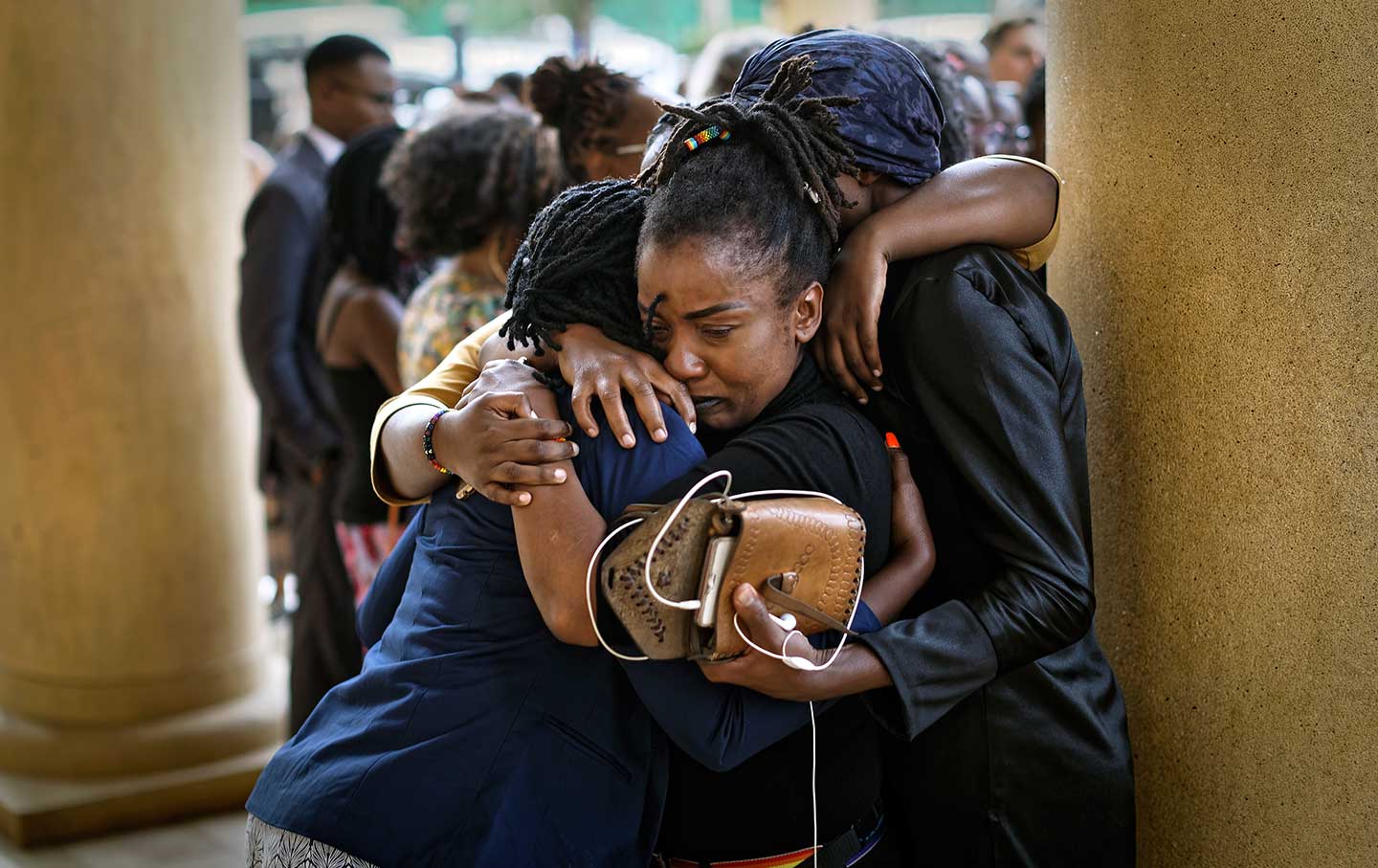 Kenyan LGBT activists and their supporters commiserate after a ruling by the High Court in Nairobi, Kenya, on May 24, 2019. (AP / Ben Curtis)

A 30-year-old transgender woman described health workers denouncing her as a “mental case.” Another woman, a lesbian, said she abandoned her dream of running for office “because I knew that I could never stand a chance.” Students recalled being suspended or expelled from school but not before being outed in front of their classmates.

These testimonies and others were featured in a recent project, Voices of Kenya, which invited queer Kenyans to share how the criminalization of same-sex sexual acts affected their lives. Taken together, the audio stories reveal a common feature of such laws: Their consequences extend well beyond whatever criminal cases they generate. The behaviors they technically ban—private acts of “sodomy” or “buggery” or the vaguer “crimes against nature”—are difficult to police, but that is not necessarily the point. The laws instill the message that sexual minorities are second-class citizens, worthy of derision, rejection, and sometimes violence.

For more than half a century, Britain, the world’s greatest exporter of antigay legislation, has acknowledged this. In 1954, British lawmakers convened a committee to review Section 11 of the Criminal Law Amendment Act of 1885, which prohibited “gross indecency.” The committee, named for its chairman, John Wolfenden, concluded that Section 11 should be repealed and in making its case stressed the law’s secondary effects: the blackmail it fueled and the damage it caused to reputations, particularly of gay men. In 1967, 10 years after the committee published its report, the Sexual Offences Act decriminalized same-sex sexual acts in England and Wales.

This breakthrough, however, came too late for Kenya and many other former British colonies. Kenya attained independence in 1963, and its inherited version of Section 11 remains on the books. Section 162 of the Kenyan penal code calls for prison sentences of up to 14 years for “carnal knowledge of any person against the order of nature,” and Section 165 calls for sentences of up to five years for “indecent practices between males.” 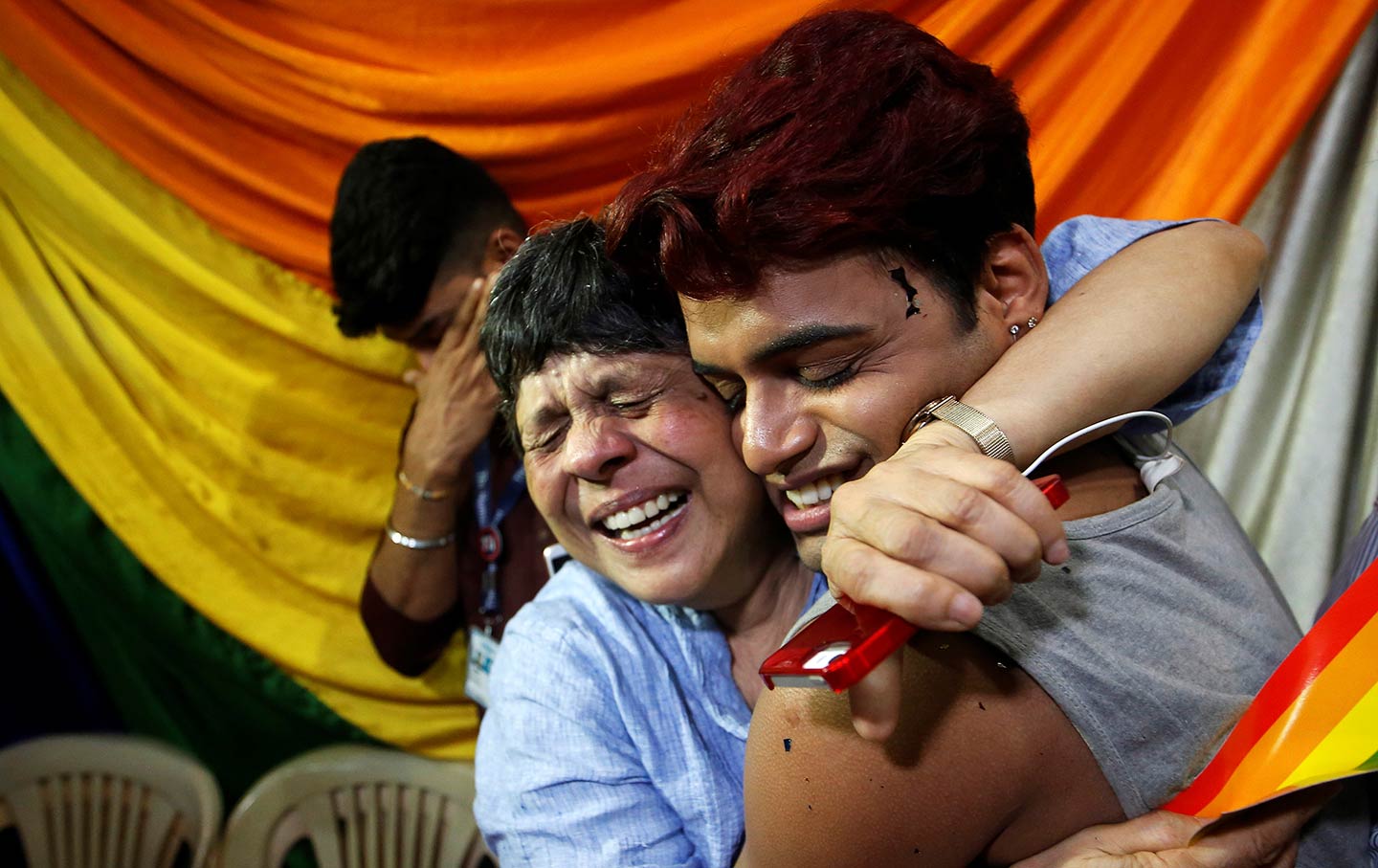 The Strange, Long Afterlife of an Inhumane Colonial Law

Prosecutions under these laws are rare. Nevertheless, invalidating them (and therefore decolonizing this aspect of the penal code) has been a chief goal of Kenyan LGBT rights activists for several years. In 2016, when a group of activists filed a petition to make that happen, they highlighted the stories of sexual minorities who were targeted for abuses like extortion, eviction, and wrongful termination—abuses the victims had been unable or unwilling to challenge because of antigay laws.

On Friday this legal challenge suffered a painful setback: Kenya’s high court ruled that Sections 162 and 165 did not discriminate against sexual minorities or violate their constitutional rights to privacy and equality. The unequivocal nature of the defeat—a three-judge panel ruled unanimously that the challenge had “no merit”—came as a surprise, given Kenyan activists’ recent successes in using the courts to expand their rights. At the same time, it reinforced the notion that, for all the promise of this kind of strategic litigation, the project of undoing the damage wrought by Africa’s colonial-era antigay laws must unfold both inside and outside the courtroom.

Early signs in the decriminalization case were similarly encouraging. After India struck down its colonial-era law against “carnal intercourse against the order of nature” last year, Kenya’s high court allowed that ruling to be submitted into evidence. Kenyan and foreign activists began dreaming that, just as India’s ruling might influence Kenyan judges’ thinking, a positive ruling in Kenya could ripple across Africa, where 33 of 54 countries criminalize same-sex sexual conduct.

Instead, Friday’s ruling raises the possibility that the Kenya decision could undermine challenges to antigay legislation elsewhere on the continent as judges take cues from their Kenyan counterparts. Similar cases are pending in Botswana and Malawi, with a ruling in Botswana expected next month.

Reading out the high court’s decision on Friday, Justice Roselyn Aburili claimed, somewhat bizarrely, that the country’s antigay laws don’t amount to discrimination because they don’t specifically mention LGBT people. She also raised the specter of gay marriage, saying a ruling in the Kenyan activists’ favor would “open the door for same-sex unions,” something the activists made no mention of in their petition.

More tellingly, Aburili indicated that the high court’s decision was informed by notions of tradition and values, saying at one point, “Any interpretation by the petitioners should not exclude our cultural values and principles.”

On the face of it, there are certainly indications that Sections 162 and 165 are consistent with many Kenyans’ views of their country’s values. An oft-cited Pew Research Center survey from 2013 indicated that some 90 percent of Kenyans said homosexuality should not be accepted by society. Even if those numbers have softened, the fact remains that Kenya’s political class espouses such views. In an interview with CNN’s Christiane Amanpour last year, President Uhuru Kenyatta said the subject of gay rights was “not of any major importance” to his constituents, adding that it was a question “of society, of our own base as a culture, as a people.” His deputy, William Ruto, has gone further, saying the country has “no room” for sexual minorities.

Yet on closer examination, in Kenya and elsewhere, it’s unclear whether polling and politicians’ statements accurately reflect how people interact with sexual minorities in their families and communities or whether surface-level hostility translates into an outright refusal to engage in any way with gay culture. Evidence that public opinion might be more nuanced was on display last year with the local reaction to Rafiki, a film by Wanuri Kahiu that became the first Kenyan film to premiere at Cannes—a feat made all the more remarkable because it had been banned at home.

Rafiki centers on the romance between two young women whose fathers are political rivals. In barring it from Kenyan cinemas, Ezekiel Mutua, the chairman of the Kenya Film Classification Board, attacked it as a bid “to normalize homosexuality.” But after the film started being written up as Oscar-worthy, the high court ruled that it could be screened domestically for seven days, a requirement for contenders in the category of Best Foreign Language Film. 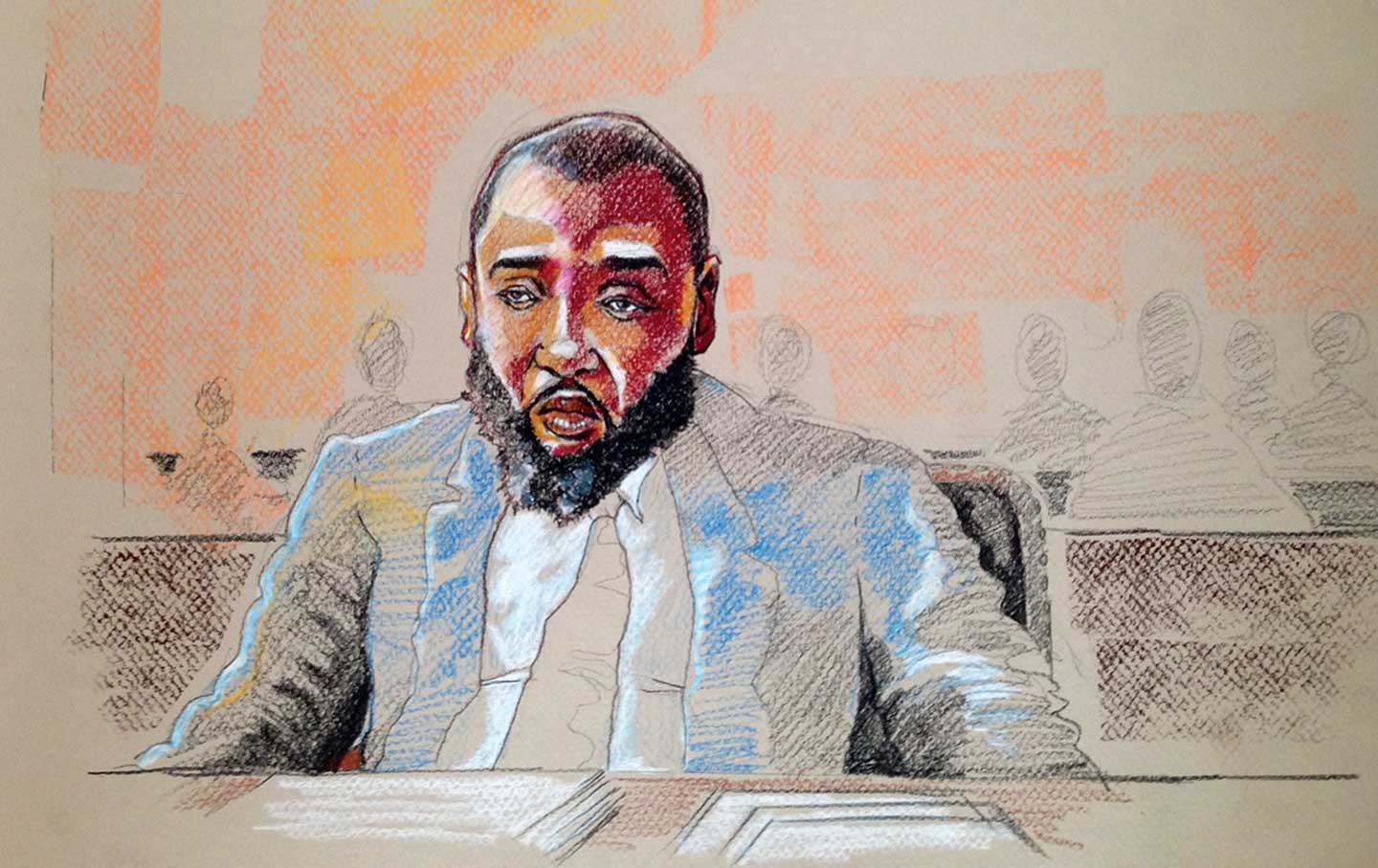 Nairobi residents turned out en masse for the screenings, which took on a celebratory air, with attendees taking selfies and applauding as soon as Rafiki began. In a review for Kenya’s Daily Nation newspaper, Thomas Rajula raved about the film, taking issue with just one element: its depiction of the homophobia the main characters encountered. “I felt like it was a far-fetched notion to portray the Kenyan society as highly intolerable to these individuals,” he wrote. “That whole communities, with not a dissenting voice among them, would go out of their way to make the lives of queer individuals a living hell is just unreal.”

The point here, presumably, is not to contend that homophobia in Kenya doesn’t exist or to downplay the role that Sections 162 and 165 play in inflaming it. Rather, Rajula points out that public opinion shouldn’t be treated as a uniform thing and that, in any case, it can change. Just as it was made more intolerant by the imposition of British legislation, it can be made more just.

To the extent that this kind of change is already unfolding in Kenya, we can credit the Kenyan activists loudly contesting the legal discrimination they face. Immediately after Friday’s ruling was read out, the activists vowed to appeal. But we can also credit the ways activists and nonactivists assert themselves in their family homes, schools, offices, health centers, and countless other spaces across the country, giving the lie to the notion that LGBT people are inherently foreign. In that way, they draw a contrast between themselves and the laws that devalue them.

At various points in Rafiki, the two main characters, Kena and Ziki, voice their wish to be “real” and to “go someplace where we could be real”—by which they seem to mean a place where they would not constantly be forced to conceal crucial parts of themselves. Increasingly, queer Kenyans are acting on a version of this wish but with an important twist: They want to transform their country into the kind of place Kena and Ziki long for, so they can be real right where they are.