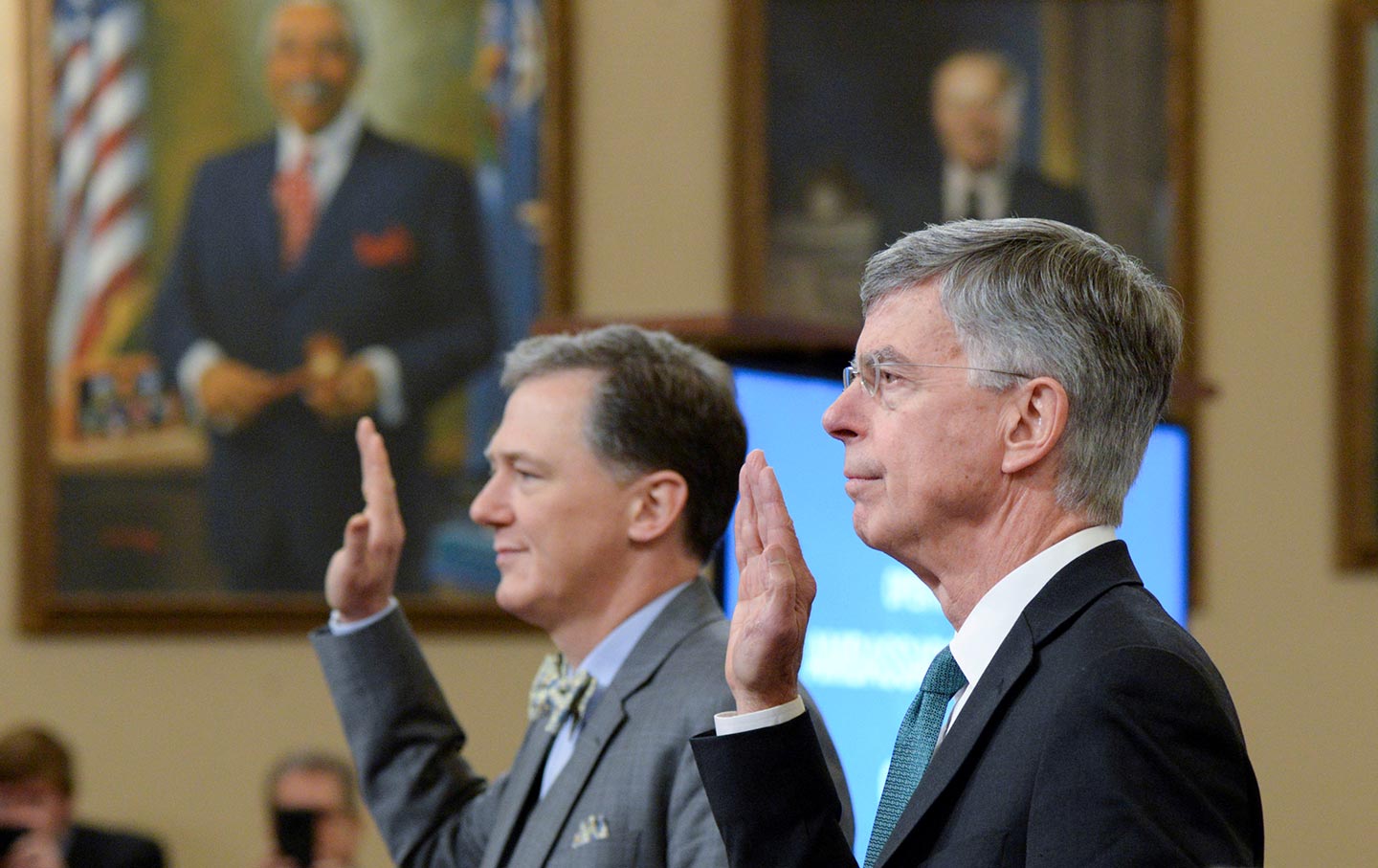 George Kent and William Taylor are sworn in during a House Intelligence Committee public hearing in the impeachment inquiry against Donald Trump. (Reuters / Erin Scott/File Photo)

At a rally in Louisiana on Thursday, Donald Trump mocked two members of the government, senior State Department official George Kent and the top US diplomat in Ukraine, William Taylor, both of whom testified in the impeachment hearing the previous day. “How about when they asked to these two Never-Trumpers, what exactly do you think you impeach him for?” Trump asked the crowd. “They stood there like, what?” The president drawled out the “what” to make it sound like the stunned speech of a confused person: “whaaa?”

Trump’s words were typically false and malicious. Neither Kent nor Taylor are Never-Trumpers. Both are civil servants who have worked for both Democratic and Republican administrations. This is why they refused to answer the question from Republican members of Congress as to what was impeachable in Trump’s actions. As government employees, both refrained from taking a stance on impeachment, saying the decision belonged to Congress.

It was precisely their status as members of the national security establishment that made Kent and Taylor ideal witnesses from the point of view of the Democrats. As Peter Baker of The New York Times observed, Taylor provided “the image, at least, of a wise, fatherly figure with hard-to-undercut credibility expressing restrained but unmistakable disapproval of what he found when he turned over the rock.” Quinta Jurecic, managing editor of the Lawfare blog, echoed these comments, saying, “Something to be said here about the desire for an older, white father figure with establishment credentials to Set Things Right.” She added that, “There’s a profoundly small-c conservative impulse there.”

This small-c conservativism was evident in the way Kent, and to a lesser extent Taylor, framed the impeachment issue as an outgrowth of Trump’s sabotaging efforts to build a strong alliance between Ukraine and the United States. “For the past five years, we have focused our united efforts across the Atlantic to support Ukraine in its fight for the cause of freedom, and the rebirth of a country free from Russian dominion and the warped legacy of Soviet institutions and post-Soviet behavior,” Kent argued, adding. “The United States has clear national interests at stake in Ukraine.”

More disturbingly, Kent cast any challenges to this hawkish policy as possibly corrupt and subversive of the national interest. ‘It was unexpected, and most unfortunate, to watch some Americans—including those who allied themselves with corrupt Ukrainians in pursuit of private agendas—launch attacks on dedicated public servants advancing US interests in Ukraine,” Kent told Congress. “In my opinion, those attacks undermined US and Ukrainian national interests and damaged our critical bilateral relationship.”

Taylor presented a more nuanced view. He agreed with Kent that a Ukraine alliance made sense because it “is clearly in our national interest to deter further Russian aggression.” But Taylor’s focus was on the confusion caused when Trump cronies like Rudy Giuliani carried out a separate foreign policy that was often at odds with the consensus agreed upon by the national security establishment. As Taylor observed, “There appeared to be two channels of US policy-making and implementation, one regular and one highly irregular.”

The Democrats chose to elevate Kent and Taylor precisely because they were nonpartisan professionals, hence could speak in terms that might win independents and Republicans to impeachment. But nonpartisan is not the same as nonpolitical. As their testimony made clear, Kent and Taylor very much have a political agenda: They are advocates for a hawkish foreign policy that wants to use Ukraine as a bulwark against Russia. The diplomats used the limelight impeachment gave them to sell this policy to the American public as if it were the only approach a patriot could take.

The problem is, this policy is eminently worth challenging—and also a distraction from the real issue of impeachment. There are all sorts of reasons why a president might want to be cautious about overcommitting to Ukraine, a country that has a disputed border with a nuclear superpower.

As Republicans like Devin Nunes and Brad Wenstrup were quick to point out, Barack Obama resisted a push to send military aid to Ukraine after the Russian invasion of Crimea. Nunes and Wenstrup brought this up with the intent to prove that Trump was more in accord with the foreign policy establishment on Ukraine than Obama was. But the proper way to frame this is to note that presidents have a perfect right to reject the counsel of foreign policy hawks and act in measured ways if they see fit.

The whole question of proper Ukraine policy is a distraction, created by the Democrats’ desire to hold impeachment hearings on an issue where they could align themselves with the national security establishment and win over independents and conservatives.

Trump should not be impeached because he upset the national security establishment. Presidents have not just the right to disregard that establishment but, in fact, would usually be wise to do so. Nor should Trump be impeached because he undermined a Ukraine policy that has bipartisan support. After all, outside the consensus in Washington, there are many others who disagree with that policy. Even the fact that Trump runs a messy White House where goons like Giuliani are elbowing career diplomats isn’t really a good reason to impeach him. Giuliani is repugnant, but there’s ample precedent for a White House with private back channels. During the Kennedy administration, the president’s brother Robert Kennedy used a back channel with the USSR to help de-escalate during the Cuban missile crisis.

Regarding Ukraine, the most valid ground to impeach Trump is that he used his office for a corrupt purpose, to get a foreign government to slime a rival politician. That’s the offense that merits a constitutional rebuke and removal. Unfortunately, Democrats have watered down their own argument by giving center stage to Kent and Taylor, who prefer to grandstand for a hawkish foreign policy. Going forward, it’ll be crucial for Democrats to keep the focus on corruption rather than travel down the irrelevant byways of Ukraine policy.