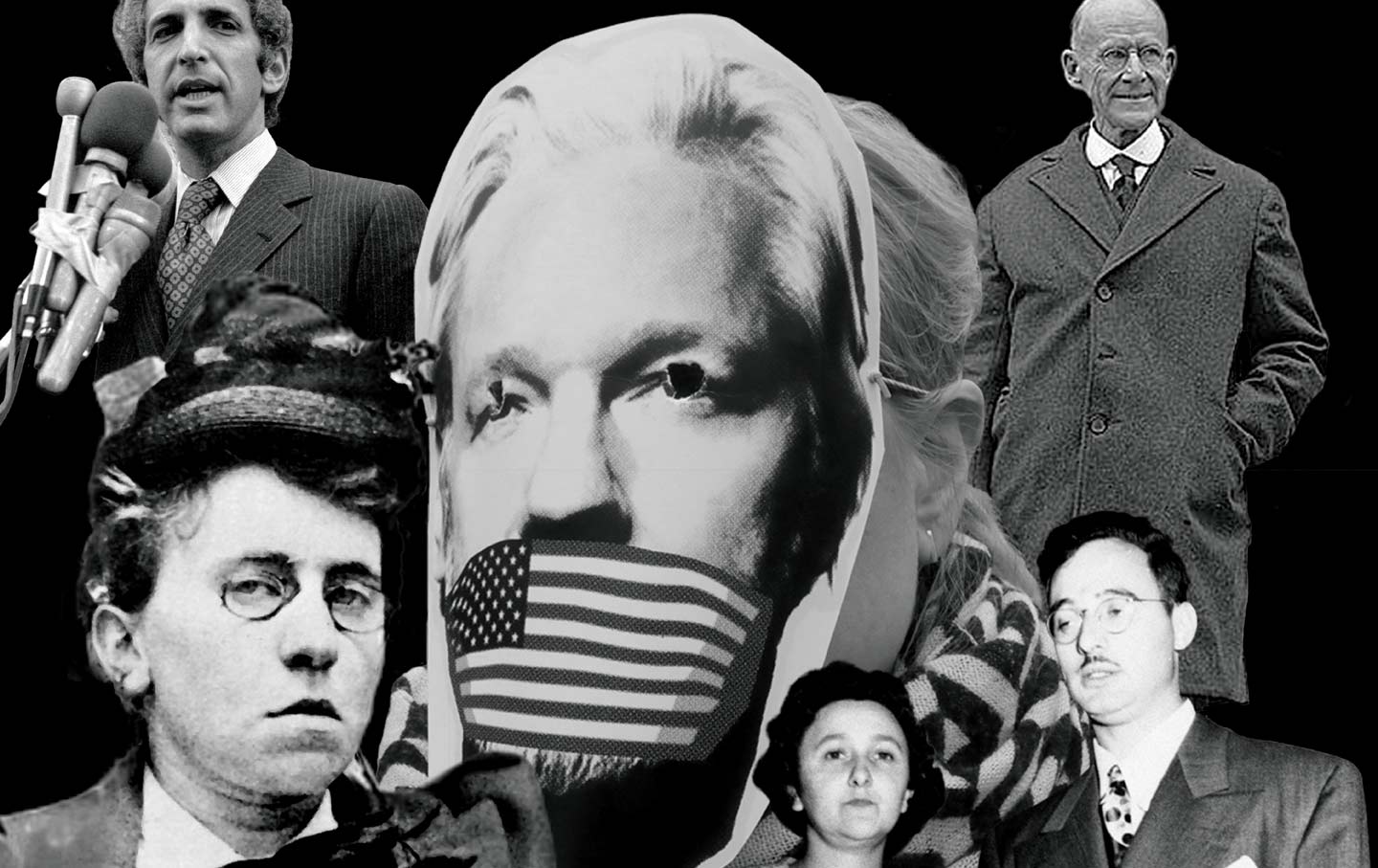 Last week the US Justice Department announced the indictment of Julian Assange on 18 counts of violating the 1917 Espionage Act. Although the government had previously charged Assange with helping Chelsea Manning, then a private in the US Army, to hack military computers, the new indictment greatly ups the ante, for Assange is now accused of publishing the Manning documents on his WikiLeaks website. This is a far more serious matter—the first time in the history of the United States that the publication of truthful information has been defined as a crime. The New York Times immediately raised an alarm. The prosecution of Assange under the Espionage Act, warned a May 23 editorial, “could have a chilling effect on American journalism. It is aimed straight at the heart of the First Amendment.”

Few would dispute that governments may need to keep certain data secret in the interest of national security. At the same time, the decision not to divulge information must be scrupulously weighed in a democracy against the public’s right to know.

The 1917 Espionage Act does not concern itself with such quibbles, however; it comes down wholeheartedly on the side of secrecy and national security. It does not require proof that the information at issue is highly significant or even that it is secret, but merely that it is “connected with” or “relating to” national defense. Nor does it demand that the alleged perpetrator must actually have harmed the United States or benefited a foreign country, only that he or she intended to do so. Partly because demonstrating intent is so difficult (and refuting it even more so), attorney Susan Buckley, a specialist in media litigation, pronounced the act “one of the scariest statutes around.” Although it is widely acknowledged to be a woefully crude legal instrument—the eminent First Amendment attorney Floyd Abrams recently characterized it as “almost farcically overbroad”—it remains on the books essentially as it was written a century ago.

Forged in the crucible of war during a period of unprecedented censorship and repression, the 1917 Espionage Act was pushed through Congress by President Woodrow Wilson, who was eager to silence critics at a time when there was widespread resistance to America’s engagement in the First World War. Thus, Section 3 of the act forbids making statements or conveying reports during wartime with the intent to interfere with the war effort. As interpreted, this provision gave the postmaster general of the United States authorization to impound or deny mailing rights to any publication he considered unpatriotic. Scores of publications were affected, including American Socialist, the organ of the Socialist Party, and Solidarity, a journal published by the Industrial Workers of the World (the Wobblies). A 1918 issue of The Nation was held back at the New York Post Office because of an editorial titled “Civil Liberty Dead.”

Based on language in the act that criminalized efforts to obstruct military recruitment, the government rounded up thousands of anti-war protesters, union activists, and political radicals, many of whom were held without trial in hastily organized internment camps. The brutality with which some of the arrests were carried out was widely reported in the media. Among those prosecuted was a movie producer, Robert Goldstein, who was tried and sentenced to 10 years because his film about the American Revolution portrayed Britain unfavorably. (The government alleged that the film had undermined support for the war, since the British were now allies.) Also brought to trial was Emma Goldman, who was arrested in 1917 in the New York office of her feminist/anarchist publication Mother Earth and charged with anti-conscription activities. She was convicted and sentenced to two years in federal prison. After her release she was deported to the Soviet Union, her birthplace.

In 1918 Socialist Party leader Eugene V. Debs was charged with violating the Espionage Act for suggesting in a Canton, Ohio, speech that members of the working class ought to be the ones to declare wars, since they were the ones who fought and died in them. At trial, he made an eloquent plea to the jury, saying, “I believe in free speech, in war as well as in peace. If the Espionage Law stands, then the Constitution of the United States is dead.” Nonetheless, the jury voted to convict and the judge handed down a sentence of 10 years in prison. In 1920, while incarcerated in Atlanta Penitentiary, Debs campaigned to be elected president of the United States. In this, his fifth run for the office as a candidate of the Socialist Party, he received over 900,000 votes.

The Supreme Court upheld the constitutionality of the Espionage Act in three important cases, affirming the convictions of Goldman in 1917 and Debs in 1919, and in the landmark 1919 Schenck v. United States decision, unanimously rejecting the appeal of Charles Schenck, an anti-war socialist who had been convicted of encouraging resistance to the military draft. In his opinion in the case, Justice Oliver Wendell Holmes Jr. sanctioned a restriction on the constitutional guarantee of free speech. The government, he wrote, may prosecute speech and actions that present a “clear and present danger that they will bring about the substantive evils which Congress has a right to prevent.” Holmes’s “clear and present danger” doctrine was applied to many cases over the next three decades.

Since the 1950s, sections of the act that deal with obtaining, receiving, or transmitting defense-related information have taken center stage. In these cases, the vagueness of the statute’s language has been helpful to prosecutors. In the McCarthy-era trial of the Rosenbergs, the Espionage Act’s nebulous references to “information relating to the national defense” permitted the prosecution to proceed without detailing the secrets Julius Rosenberg was charged with passing, while its sweeping definition of conspiracy—“If two or more persons conspire” and one or more acts to carry out the object of the conspiracy, “all of the parties to such conspiracy shall be punished”—made it possible to convict Ethel Rosenberg.

The act was again pressed into service during the Vietnam War era, notably in the trial of Daniel Ellsberg and Anthony Russo, who were charged with releasing the Pentagon Papers to the news media. The Ellsberg case could have for the first time forced the courts to consider whether the unauthorized publication of national-defense information constitutes a crime, but the issue was not resolved because the criminal conduct of Nixon’s “plumbers,” who broke into the files of Ellsberg’s psychiatrist, forced the judge to dismiss the case.

During the Obama years, the shape-shifting Espionage Act became a vehicle for prosecuting ideologically motivated whistle-blowers—frequently called by the derogatory term “leakers.” A key case of the Obama years was that of Chelsea Manning, who transmitted hundreds of thousands of documents relating to the Iraq and Afghan wars and Guantánamo detainees to WikiLeaks. In her 2013 trial, conducted in a military court under the Espionage Act and the Uniform Code of Military Justice, Manning pleaded guilty, explaining that her aim had been to expose “the true costs of war.” Also indicted in 2013 under the Espionage Act was Edward Snowden, who was charged with having transmitted secret NSA documents to the media. In both instances, the accused had acted out of a strong desire to inform the public about what they saw as improper and immoral secret government activities. However, neither case resolved the question of media culpability, since Manning’s material was released through WikiLeaks and Snowden has not returned to the United States for trial.

It seemed possible that the issue might be litigated for the first time in June 2017 when a 25-year-old US Air Force veteran, Reality Winner, was arrested and charged under the Espionage Act for transmitting national defense information to the left-leaning news website The Intercept. But after a year behind bars, Winner decided to plead guilty and accept a plea bargain. Once again, the liability of the journalists who published the material was not considered. If Assange is extradited to the United States, the limits of freedom of the press in the age of the Internet may finally be tested in court.

Over the years the Supreme Court has handed down a number of decisions that have reined in the Espionage Act. Still, during the hundred-year lifetime of the act, the government has been able to use it to restrict freedom of speech; imprison anti-war activists, socialists, anarchists, communists, and ideological whistle-blowers; and help to destroy numerous progressive organizations and publications. Moreover, who knows how many people have been dissuaded from speaking or acting politically because of the harsh penalties inflicted on some defendants. Eugene Debs was sentenced to 10 years at the age of 63, Emma Goldman was imprisoned for two years and then deported, both Rosenbergs were executed, Rosenberg co-defendant Morton Sobell was given 30 years and sent to Alcatraz, Chelsea Manning suffered prison conditions verging on torture and received a 35-year sentence (later commuted).

Now, we wait to see whether a president who has insulted individual journalists and has labeled the news media “the enemy of the people” will succeed in wielding this ill-formed statute to strike at freedom of the press.

Correction: The original version of the piece misstated the number of counts that Julian Assange has been charged with violating of the 1917 Espionage Act.