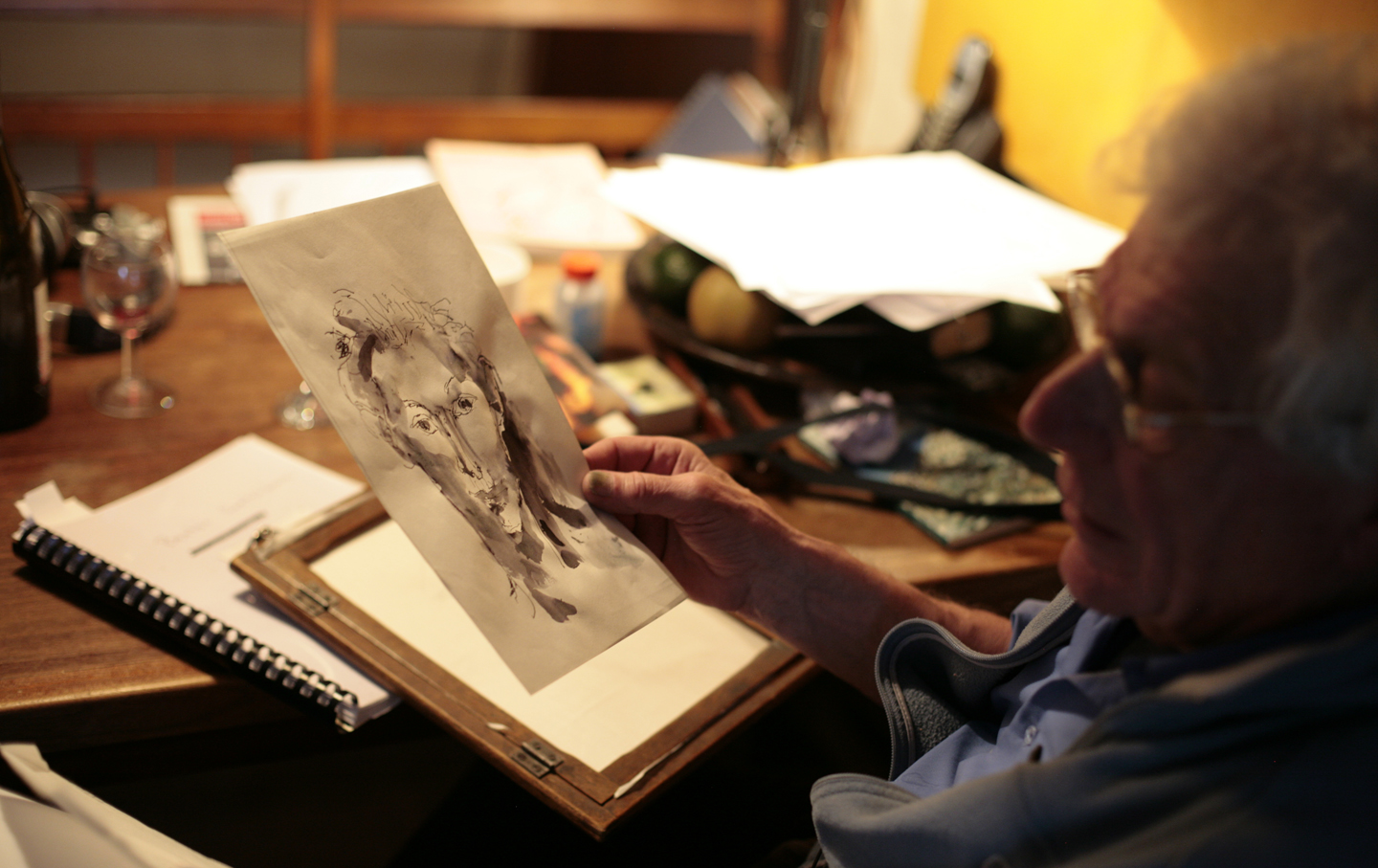 When we last see John Berger, in The Seasons in Quincy, he is hunched over his black Honda CBR 1100 motorcycle riding off into the Parisian sunset, with Honor Swinton, daughter of an evidently nervous Tilda Swinton (a prominent character in the film), sitting behind him with her arms wrapped around his waist. In the scene just before that, John offers to teach the teenager, 72 years his junior, how to ride when she turns 17 the next year.

As John Berger himself has explained in the past, his passion for the motorbike comes from the fact that on the bike “the relation between a decision and its consequences is so close. And since you are so vulnerable, it demands a quality of observation that is extremely intense. This observation is not only of what is happening but also of what may happen in the very next instant.”

Indeed, John Berger has spent the majority of his life observing, intently, what is happening, what may happen, and also what has happened in the past. In the decades since Ways of Seeing, his 1972 television series on art and photography, he remained prolific as well as diverse in the capacity of a storyteller, producing novels, plays, poetry, screenplays, paintings, photographs, and works that combine some, if not all, of the above. And yet for a man who has spent his whole life telling us about the lives of others, he has told us very little about his own life. In essence, there are two John Bergers: John the Artist who will always be with us, and John the Human who lives among us but is growing older. In The Seasons in Quincy, we learn little about the latter and attempts to celebrate the former collapse into the elegiac.

John Berger, the man, was born in London in 1926 to a father of Hungarian descent, and a working-class mother who had been a suffragette in her youth. Sent off to boarding school, a young John found refuge and companions in artists from decades past. At age 16, he dropped out to enroll in art school. A two-year stint in the army would follow, after which he returned to teaching art. He would go on to write for the Tribune, become an art critic for the New Statesman, and transition away from art criticism to work on his novels and essays, eventually moving to the village of Quincy in the French Alps.

John Berger, the artist, is made of stories, instead of bones and flesh. He was formed in the company of Piero della Francesca, Giacometti, Frank Auerbach, Caravaggio, Velázquez Leger, and of course, Goya. According to him, a storyteller is “death’s secretary.” Thus he walks in the world of the dead, for instance delivering letters from the sculptor Juan Muñoz to the poet Nazim Hikmet, and buying and sending presents to the philosopher Rosa Luxemburg.

“When you tell a story about a life,” Berger advises in About Time, “you try to touch its meaning. To hold it… To preserve it against the onrush of chaos.” The Seasons in Quincy sets out to do this by focusing on select motifs and recurring images present in John Berger’s work. The film, produced by the University of London’s Derek Jarman Lab and showing through September 13 at Film Forum, is actually a collage of four distinct shorts put together over five years by Tilda Swinton, Colin MacCabe, Christopher Roth, and Bartek Dziadosz—most of whom are featured in the films as well. The shorts are titled: “Ways of Listening,” “Spring,” “A Song for Politics,” and “Harvest.”

The presenters of the second section, “Spring,” a couple of grad students, announce that they had set out with the intention to talk to John Berger about “the Arab spring, the Prague spring, and the perpetual false spring of capitalism.” Unfortunately, their arrival coincides with “a private winter”: the sickness and death of John Berger’s wife Beverly, which has thwarted their plans. The audience is then treated to a visual essay with John’s voice from his reading of his novel Pig Earth, an essay “Why Look at Animals,” and his narration on animals from the TV essay About Time. This is played along with interviews with local farmers. Toward the end, the director of the short, Christopher Roth, attempts an explanation of the significance of animals, name-dropping Martin Heidegger and his Fundamental Concepts of Metaphysics: World, Finitude, Solitude and Derrida’s The Animal That Therefore I Am, making for an incredibly confused, though brief, segment.

“A Song For Politics” is centered around a discussion including John Berger, Colin McCabe, Akshi Singh, Christopher Roth, and Ben Lerner. But from the onset the decision to show the discussion in black and white and score this segment with Soviet-era propaganda music like “L’Appel du Komintern” and “The Red Flag” is jarring. The topic of conversation is rampant capitalism. The current problem, John explains, is that “all the important decisions which deal with the use of the planet and its resources are taken by the financial institutions,” forces that lack a sense of history. The question then is how to contest these forces. After a back and forth, and praise from Ben Lerner for John’s work, the closest thing we can glean from the conversation that looks like an answer is that the left must do a better job of storytelling.

A Vast Choir of Voices: On Claude Lanzmann

The Virtues of Difficult Fiction

“Harvest,” the final short, could be retitled, “The Berger Kids Meet the Swinton Kids.” In a way, it connects to the first short, “Ways of Listening,” on the theme of continuity. In “Ways of Listening,” John Berger and Tilda Swinton, who starred together in the 1989 film Play Me Something, reconnect. We find out from their conversation they share a common birthday, November 5 (Guy Fawkes Day), albeit 34 years apart. We also find out they both had military fathers, who were reticent to discuss their experiences of the war. Sitting around John’s kitchen table, as Tilda cuts up apples, surrounded by spices, sugar, pears, they discuss “the idea of talking to one’s children about the inability to hand things on.” But they don’t go on to say what it is that they would want to pass on. Not doing so was a missed opportunity to present a vulnerable, yet honest, moment in an exchange that, at times, felt staged.

So when “Harvest” begins with John’s confession that “the idea of children, is not only, all the natural reasons, but also a question of that continuity—that vertical continuity.” We expect, at last, to learn a little about John’s personal life, his thoughts as he approaches the end of his life, and the legacy he expects to leave for his children. (He mentions nothing of his dead wife, except directing the Swinton twins to eat the raspberries she grew in front of her pictures, so she can share the pleasure.) But all we learn is that he adores eggs. And the screen is flooded with drone -level shots of Quincy that feel gimicky.

Ultimately, the film is showing more than telling. More celebrity profile than in-depth profile. In a 1953 essay for the New Statesman, Berger the Artist suggested that drawing is discovery. “It is the actual act of drawing that forces the artist to look at the object in front of him, to dissect it in his mind’s eye and put it together again; or, if he is drawing from memory, that forces him to dredge his own mind, to discover the content of his own store of past observations.” We discover nothing we didn’t know, and little new about Berger the Human from the four portraits presented in the film. All an avid fan can settle for, in the way of knowing Berger is his 2007 fictional memoir Here is Where We Meet, in which he converses with dead friends and family. Lucky for us perhaps, as his dead mother explains, “The dead don’t stay where they are buried.”