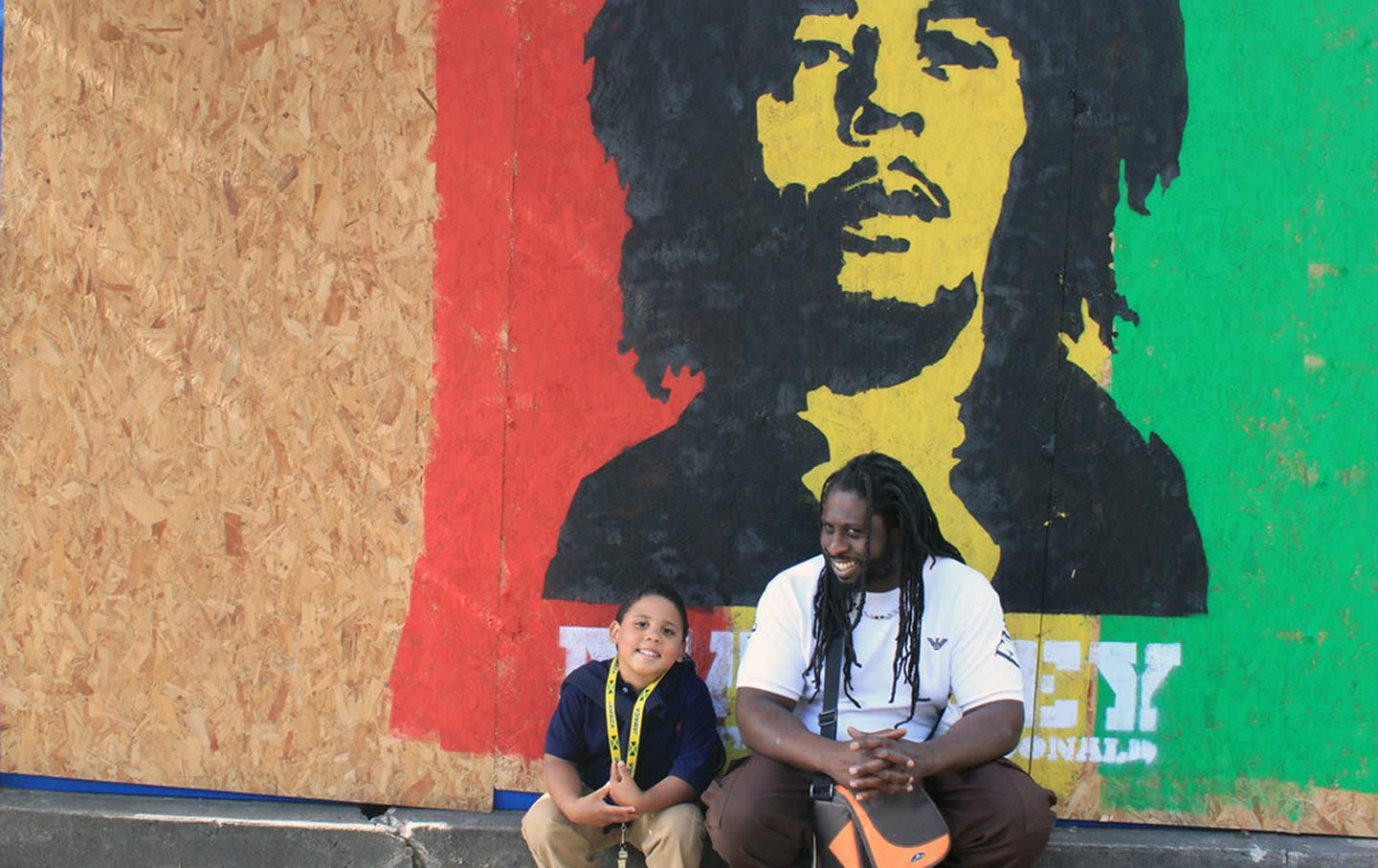 The island nation of Jamaica holds a special, almost spiritual significance for many people of color, as well as for anyone concerned about advancing equality and justice in the world. It is the birthplace of the Rastafari movement, reggae, dancehall—and democratic socialism before it became popular in the United States. Bob Marley’s legacy epitomizes the struggle for transforming an economy and society using its natural resources, its culture and industrious people. Marley himself strived to overturn an unfair global economic system that oppressed black Jamaicans and people of color everywhere.

However, since Marley’s death almost four decades ago, Jamaica’s economy has not done much for working people. In Jamaica, one-fifth of the population live in poverty. The country experiences high levels of crime and violence. Unemployment reaches between 40 and 60 percent in Kingston’s lowest-income neighborhoods like Trench town (44.8 percent), where Bob Marley grew up. The national minimum wage is about US$52 for a 40-hour workweek, even after a 12.9 percent increase last year. According to Oxfam, Jamaica is ranked 96th out of 157 countries and 21st out of 25 Latin American and Caribbean countries on addressing inequality.

Marley’s term for this might have been a “Babylon System”: “the vampire, yea! (vampire) / Suckin’ the children day by day, yeah! / Me say de Babylon system is the vampire, falling empire, / Suckin’ the blood of the sufferers, yeah!”

Unhappy about this state of affairs, Jamaicans have become predictably fatigued and have come to accept austerity as a way of life. In November 2018, the Jamaican Central Bank’s public relations department took it a step further, and launched a public information campaign using billboards, radio jingles, and television ads to teach Jamaicans about why very low inflation is important.

Based on the Central Bank’s official target of a 4 to 6 percent inflation rate set in August 2017, both the IMF and the international financial media have spiritedly endorsed the new campaign. Borrowing the language of reggae music, and sticking closely to neoliberal economic doctrine, the campaign claims “low and stable inflation is to the economy what the bass line is to reggae music.”

Most people think inflation is bad, and it is—when it is out of control. However, the media often exaggerates its effects, by equating any inflation with stories of hyperinflation. For example, hyperinflation in Venezuela at present is another ball game altogether, as it causes massive instability and erodes ordinary people’s ability to meet their everyday food and medical needs. It is particularly bad in an open economy like Jamaica, as it creates uncertainty for investments, and can lead to capital flight hurting low-wage workers, for instance in its textile or retail industry.

While Jamaica experienced some years of high inflation in the 1980s and ’90s, successive currency devaluations have not helped its workers or the economy. The package of neoliberal policies, especially currency devaluations, prompted the country to open its domestic markets and made it more beholden to foreign capital. This is why it has become the focus and the “bogeyman” of central banks and the neoliberal establishment led by the World Bank, Wall Street, and the IMF. They have wrongly given priority to the prices of goods and services as an important reflection of how well an economy is doing. More importantly, they prioritize the desires of investors.

With the neoliberal takeover, low inflation has become the mantra of Jamaican politicians. What the “inflation targeting” campaign doesn’t mention is that a very low inflation rate mostly benefits asset holders and investors in the country’s “booming” stock market. It redistributes power away from working people who clamor for an economy that provides better jobs, public health care, goods that are more complex, job security, and better wages. It also surrenders democratic control over the economy to these financial elites that would neglect these broader concerns. This marketing campaign therefore places undue attention on inflation, and suggests the status quo of bare minimum public services and stagnant wages is good enough.

After the 2008 global financial crisis, the IMF imposed one of its harshest austerity programs globally, as Jamaica’s debts piled up to 140 percent of GDP at the time. This included a budget surplus of 7.5 percent, worse than Greece’s at the peak of the euro crisis. In 2018, for every dollar the government spent, 66 cents went towards repaying its debts and interests, while 18 cents and 12 cents were spent on health and education respectively. That, in turn, reduced opportunities for ordinary Jamaicans to improve their lives, while reducing levels of employment and restricting worker wages. The regime essentially reduces the limited power of workers and ordinary people to meet their current and future needs, and further empowers local and international financial elites.

By publishing and legislating inflation targets that are extraordinarily low by developing-country standards, the Bank of Jamaica hoped it would keep investors interested, and attract new capital into the economy. It also showed a commitment to the IMF program that advocates continued suppression of wages in the national economic pie by keeping business costs down and the country “attractive” to investors.

In this regard, Bob Marley was prescient in his song “Chant Down Babylon”: “Men see their dreams and aspirations / Crumble in front of their face, / And all of their wicked intention / To destroy the human race.” Marley railed against the social and economic structures that marginalized working-class people and promoted black consciousness and solidarity with the downtrodden and marginalized. His ideological commitment was to bring about social change and emancipation through changing the mindset, language, and political possibilities toward inspiring action.

Today, neoliberal economics in Jamaica continues to create wealth for those with capital and privilege. It promotes a cycle of debt, despair, and poverty. Now, it has essentially colonized reggae music.

Norman Girvan, a brilliant Jamaican economist who dedicated his life and work to illuminating the need for social transformation, believed that Jamaica was in a permanent state of dependence due to the IMF and its neoliberal economic policies. In one of his speeches prior to his passing four years ago, he lamented the country’s perennial dependence on international capital. In reference to the stranglehold of the IMF and its policies, he reckoned that it purveyed “policy recolonization of the Jamaican state and the gutting of its capacity to influence economic life except for the most elementary tools of the fiscal budget and central bank operations.”

He added that this “recolonization by invitation” was characterized “by an increasingly ready acceptance by policy elites of the diagnostic and prescriptive frameworks handed down by those with the money and the power.” In similar fashion, Marley warned about this in “Roots”: “Some are wolf in sheep’s clothing / Look at that / Many are called / But only a few are chosen.” In “Could You be Loved,” Marley suggested, “Don’t let them fool ya / Or even try to school ya / Oh, no / We’ve got a mind of our own / So go to hell if what you’re thinking is not right.”

In effect, the false prophets of neoliberal economic philosophy, including those upholding the idea that inflation targeting improves growth and welfare, are committed to perpetuating a system of racism and economic discrimination. Marley, as Girvan, would cringe at the state of affairs in Jamaica today. Girvan hardly ever addressed inflation in his work, except to state that much of the IMF-type policies have “made fiscal and monetary policy hostage to exchange rate policy and inflation policy” that narrowed other possibilities to transform the Jamaican economy. Girvan probably knew that inflation targeting was not an adequate policy measure, as Ha-joon Chang, and others have noted, as it would push inequality up further. Attempting to lower inflation beyond a suggested normal rate (roughly as 10 percent) only serves to disproportionately raise the income levels gained from interest for already-rich asset holders and investors.

Girvan ended his reflection about independence in Jamaica suggesting that true sovereignty begins with independent and critical thought. The way forward is to “get it together, get it together right now,” and create a new song of freedom: a new redemption song for Jamaica.