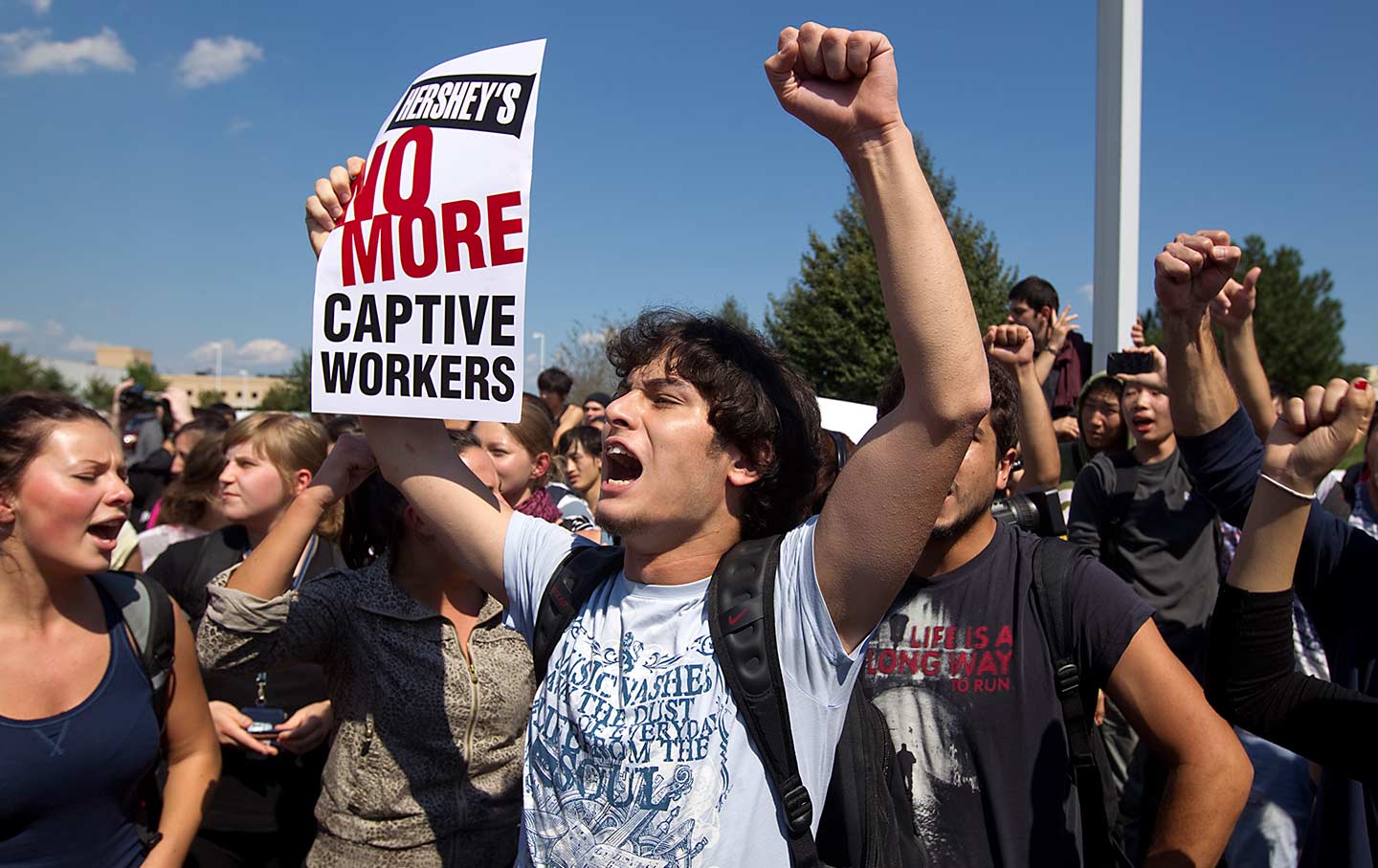 The foreign students came for a summer of adventure, invited to the United States for a work experience program, but many did not get the cultural exposure they were expecting. Instead, they saw a grimmer side of American industry: abuse, fraud, and discrimination.

The Summer Work Travel (SWT) program is a short-term labor scheme for foreign students enrolled in a college or university outside the United States. It’s the largest job program administered by the State Department through the J-1 visa and is marketed as a way for students to “to share their culture and ideas with people of the United States through temporary work and travel opportunities.” And each summer, more than 100,000 of these student workers arrive, matched with a certified employer, to improve their English, explore life in the States, or just make some quick cash.

Yet according to an investigation published by the International Labor Recruitment Working Group (ILRWG), a coalition of unions and rights groups, companies often see J-1 workers as cheap, easily exploitable labor. Because J-1 workers are considered part of an international exchange, employers can skirt regulations like health and safety protections and avoid paying Social Security and health care benefits. The biggest beneficiaries of this scheme are giant American corporations like McDonald’s, Dunkin’ Donuts, and Disney.

Oliver Benzon, 24, traveled from the Dominican Republic to Ocean City, Maryland, in 2015, expecting to be set up with a restaurant job. But when he arrived, he realized he would be tasked with setting up the restaurant itself.

A Roof Is Only the Beginning

The Robots Are Coming for Our Jobs

Violence Is in the Air

“We went to the restaurant, and then we see that it’s under construction,” Benzon recalled, speaking by phone from the Dominican Republic. “We said, ‘Oh, my God, this is going to be very, very hard.’”

Benzon, who had planned to work as a cook, ended up spending the first part of his experience hauling kitchen equipment, even though SWT participants are not supposed to perform such tasks because of safety concerns. Eventually, he said, he did work in the restaurant but had to face bullying treatment and abusive language from his boss. He said, “We were treated like dirt because our supervisors knew we couldn’t complain.”

In addition to the hostile workplace, he said, he and all the other black and Latinx workers were forced into low-wage back of the house jobs, while their white coworkers filled server positions that came with better pay and tips. Even then, he said, he was paid just a small fraction of what he was owed, after spending thousands in fees for the privilege of working there.

Although SWT-sponsoring agencies are supposed to oversee participants and handle problems with employers, he said his sponsor did nothing, despite receiving numerous complaints. According to advocates, sponsors have a vested interest in keeping workers on the job. The business model is based on charging individual students fees—sometimes extracting several thousand dollars per applicant to connect them with US-based employers seeking seasonal labor. The sponsors “don’t really care about anything,” Benzon said, “because they already have their business with the employer, getting benefits with them.”

In theory, SWT workers are supposed to experience the program as a form of cultural immersion, in which they “work and interact with U.S. citizens, and…engage in activities and events that provide exposure to U.S. culture,” according to the ILRWG report. Even though the rather loose definition of “culture” includes low-wage manual and service work, demand for this experience has soared. In 2018 about 104,500 workers were hired through the SWT, up from about 95,000 in 2015—a more than fivefold increase from 1996. According to 2015 data, the average age of SWT workers was only 21, and just over half were women. They came from 141 countries, mostly Bulgaria, China, Ireland, Romania, and Ukraine. Nearly 16,000 firms operated as employers.

Typically, sponsoring agencies with names like Life Adventures Inc. match employers with workers, who usually end up in the most precarious and lowest-paying industries, including hospitality, entertainment, and retail work. While it is marketed to students, the program’s labor component is pragmatic, not educational: The government requires that jobs involve “minimal training and are seasonal or temporary in order to earn funds to help defray a portion of their expenses.” Some student workers have complained about being placed in service jobs in which they are isolated from other people—a far cry from the English-language practice they often thought they were signing up for.

The State Department said in a statement to The Nation that it “has zero tolerance for any abuse and misconduct. We work with local, state, and federal law enforcement entities to uphold the law and protect participants…[and] proactively monitor sites and meet with participants to ensure their health, safety, and welfare.”

But according to Evy Peña, the communications director of the advocacy group Centro de los Derechos del Migrante, which collaborated on the ILRWG report, the State Department is unable to effectively regulate the program. Instead, she argues, the Labor Department should have oversight over the tens of thousands of SWT workers. “The State Department’s mission is not to protect the workers,” she said. “That is not built into the program.”

State Department work programs have faced several public scandals in recent years. In 2011 a group of young workers who were assigned to work at a Hershey packing plant in Pennsylvania organized a high-profile strike and protest campaign against their harsh working conditions. Boosted by social media, about 200 youths walked out to try to shame the classic American brand for forcing them into a summer of drudgery, working long shifts packing candy.

The same year, the J-1 program veered into the Miami underworld, when two SWT workers arrived for what they thought was going to be a summer of clerical work at a yoga studio. They were instead roped into a sex-trafficking scheme, which advertised their services as “Beautiful ladies from Kyrgyzstan, Uzbekistan, Belarus, and Ukraine offering Sensual Body rubs.”

The SWT workers’ marginal status makes them vulnerable to intimidation and retaliation if they try to report violations. As foreign workers, J-1 workers are also typically ineligible for the legal-aid services that US residents often rely on for representation in civil actions.

But even if they are not subject to outright abuse, economic insecurity is baked into the SWT. The program fuels a broader pattern of outsourcing and subcontracting low-wage labor. Though the State Department does not report detailed wage data for the SWT, there is a documented pattern of employers’ using J-1 labor to circumvent union contracts. A 2011 analysis of the program by legal scholar Kit Johnson found that Disney’s various programs for J-1 visa workers—touted as a cultural and educational experience despite revolving around custodial and concession jobs—collectively saved the company some $15 million in labor costs because they were excluded from collective-bargaining agreements.

The ILRWG report also points to a trend of “visa shopping” among some employers, who use J-1 workers to supplement their seasonal hiring under other labor visa programs, including H2-A, a larger program for importing farm labor, generally from Latin America, and H2-B, a similar temporary labor program for low-paid jobs like landscaping and amusement park maintenance. Both programs, unlike the SWT, are administered by the Department of Labor. Combined with the even less regulated SWT program, they are producing a constant flow of underpaid and underprotected short-term workers.

After the negative publicity of the SWT nightmares of 2011, the Obama administration initiated reforms to improve supervision of sponsors and employers. Yet advocates say the State Department still fails to protect J-1 workers, enabling employers to capitalize on an underregulated workforce of students who, because of their restrictive visas, are tethered to their workplaces.

There were some stirrings in the White House this week, however, after the publication of the ILRWG report. The State Department is reportedly considering curtailing the use of J-1 as a work program by ramping up oversight and requiring more transparency in the recruitment process.

While limiting the scope of J-1 work visas might help, the ILRWG calls for a complete overhaul of the SWT not only to bring it within the purview of the Labor Department but also to ensure transparency in the system. The government, the report says, should inform students of the terms of their employment and provide a grievance process and an improved enforcement system for abusive companies or sponsors.

The idea of summer work for students suggests a casual gig. But when operating on such a massive scale, it can erode working conditions in already precarious job sectors. In the long term, labor advocates want to reimagine guest worker programs so they will provide fair pay, equal protections under labor laws, and ultimately, a pathway to citizenship.

For now, many workers like Benzon have no illusions about cultural exposure. Even before his ordeal in Maryland, he saw the J-1 visa as the easiest way to legally earn money in the United States. For him, even a short-term job was a better opportunity than what was available to him in the Dominican Republic.

Some young people do return to their countries with an impressive amount of cash, he said. “So everyone sees that, and they want to go to the United States. But when you go there, you see that the reality is another.”

Benzon is now at home and working at a call center—a typical dead-end gig for young people who cannot migrate for work. But he has joined the ILRWG in its campaign to reform the J-1 program. At the media conference announcing the report, he warned his fellow young workers, “The world needs to know about this program—a government-approved program that businesses are using to denigrate workers’ rights.”

The State Department website is still promoting the SWT to the world as a colorful cultural exchange, with photos of smiling young people gaining “first-hand experience” and exploring “entrepreneurship” through work. As long as Uncle Sam keeps selling aspiring migrants exciting opportunities abroad, they’ll keep learning, from experience, the hard lessons of labor in America.