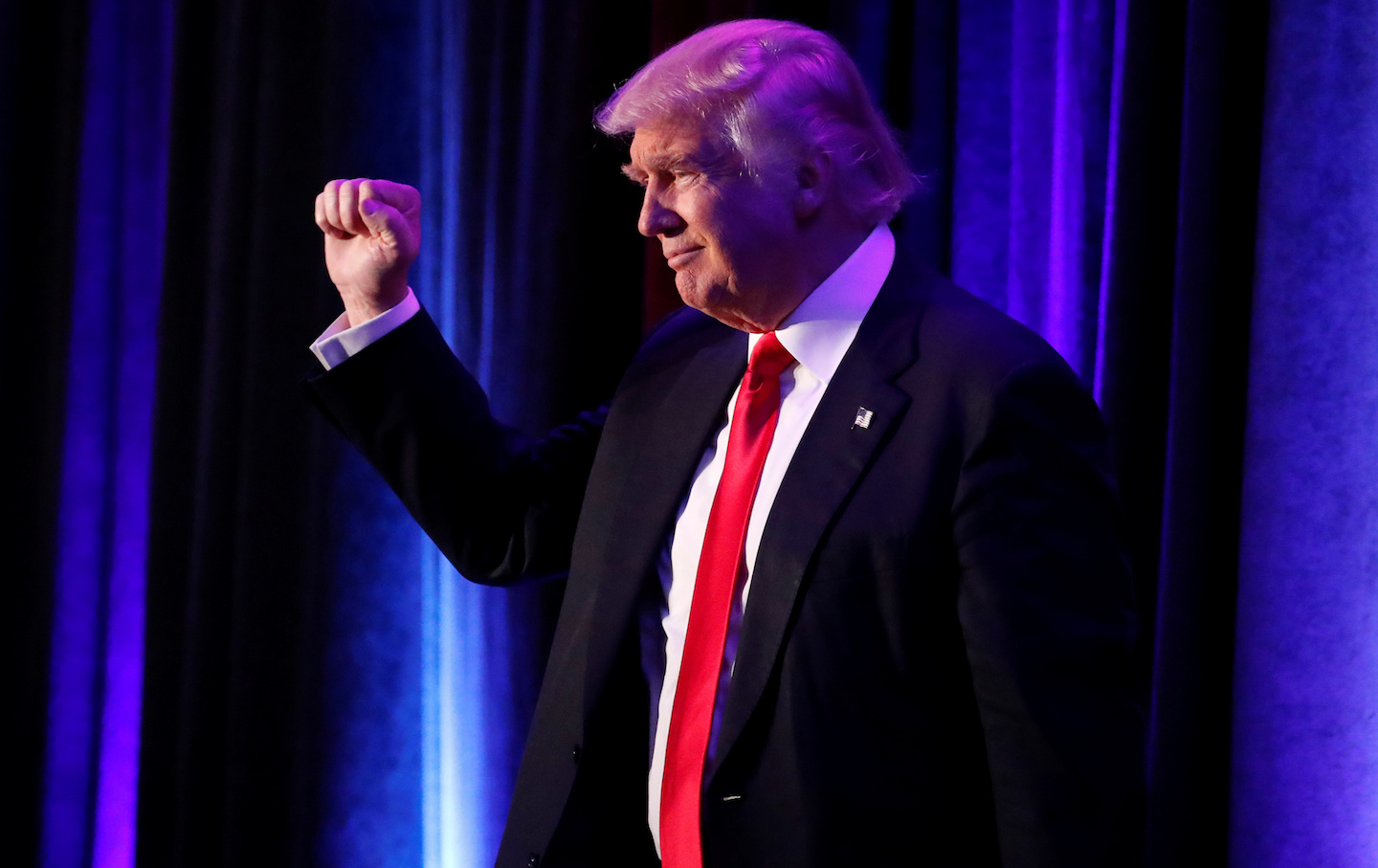 On the Sunday before the 2016 election, when media and political elites still imagined that Democrat Hillary Clinton might become the 45th president of the United States, former House Speaker Newt Gingrich was asked what he thought would happen if the candidate he was supporting, Republican Donald Trump, were to prevail.

The former speaker of the US House of Representatives did not paint a rosy picture of peace and prosperity and national unity. Quite the opposite. Gingrich imagined more division.

“November 9th?” asked Meet the Press host Chuck Todd. “What do we do as a country on November 9th? Because this has been a rough election. And I want to use your words. This is what you said in January of 2001 after another very contentious presidential election. You said the following: ‘Most Americans do not find themselves actually alienated from their fellow Americans or truly fearful if the other party wins power. Unlike in Bosnia, Northern Ireland, or Rwanda, competition for power in the US remains largely a debate between people who can work together once the election is over.’”

“That was American circa 2001, as far as you were concerned,” continued Todd. “Do you believe that’s the case in January of 2017?”

“No. No, I think tragically, we have drifted into an environment where…if Trump is elected, it will just be like Madison, Wisconsin, with Scott Walker. The opposition of the government-employee unions will be so hostile and so direct and so immediate, there will be a continuing fight over who controls the country. I think that we are in for a long, difficult couple of years, maybe a decade or more, because the gap between those of us who are deeply offended by the dishonesty and the corruption and the total lack of honesty in the Clinton team. And on their side, their defense of unions, which they have to defend, I understand that. But that will lead to a Madison, Wisconsin, kind of struggle if Trump wins.”

“Wow,” replied a nonplussed Todd, who reflected momentarily on the picture Gingrich had painted, and then said, “I’m going to let you go.”

That option no longer exists. We must take Gingrich, and Trump, seriously.

The Trump team is in charge.

The “billionaire populist” has won the presidency, empowered by white working-class voters who were so desperate for change that they embraced an oligarch. Clinton has conceded her defeat in the bitterest presidential race since 1800. Trump has won an Electoral College majority, even if he is likely to lose the popular vote.

The Republican president will have what Walker and many other Republican governors had who were elected in the “wave” year of 2010: “trifecta” control of the government, with GOP dominance of the executive branch and both chambers of the legislative branch.

We can and must be ready to ‘obstruct, delay, and halt the attacks on people of color, women, and working families.’

Donald Trump said so many things in so many different ways during the course of his 17-month campaign for the presidency—about building walls, banning Muslims, tearing up the Iran nuclear deal, abandoning climate agreements, and scrapping the Trans-Pacific Partnership—that it is easy to imagine that he might take the country in any of a number of difficult directions.

But that is the same nonsense that has allowed Trump to get this far. We know enough about Trump and the party he leads.

Make no mistake, Trump now leads the Republican Party. And that party has in recent years developed an approach to power. When it does not control the executive branch, the GOP obstructs the Democrat who is in charge. When it has the executive and legislative branches in its grip, the GOP acts. Quickly.

Despite the whining of “Never Trump” conservatives that the Republican nominee was politically impure, Trump accepted the nomination of a socially and economically conservative party that spelled out its agenda in a platform that People for the American Way’s Right-Wing Watch recognized as a more extreme version of the party’s previous programs: “a far-right fever dream, a compilation of pouting, posturing, and policies to meet just about every demand from the overlapping Religious Right, Tea Party, corporate, and neo-conservative wings of the GOP.”

Gingrich correctly noted that the platform on which Trump was elected outlines an aggressive anti-labor agenda that parallels the worst of what Walker and other members of the GOP’s “Class of 2010” implemented in the first months of their tenures. The new president has criticized minimum-wage laws and supported anti-union “right-to-work” laws. Only fools would doubt that his fiercely anti-labor vice-presidential running mate, Indiana Governor Mike Pence, will hesitate to implement the agenda (as a defining player on domestic policy) just as quickly as did Walker. Nor should they doubt any of the other outlandish and extreme commitments made by Trump during what the new president described in his victory speech as a “nasty” and “tough” campaign. Trump will have skilled and experience allies, not just in Pence but in House Speaker Paul Ryan and Senate majority leader Mitch McConnell.

That means that the immediate response of progressives to Trump’s election must be one of opposition—an opposition that is prepared, as Democracy for America activists say they are, to “do everything in our power to obstruct, delay, and halt the attacks on people of color, women, and working families that will emerge from a Trump administration.” But this must be a knowing and informed opposition. Protests will be a part of it; protests as large and impassioned as those seen in Scott Walker’s Madison and John Kasich’s Columbus and on occupied Wall Street. But protests cannot be the whole of the opposition. Senate Democrats retain the filibuster power, and they must use it—from the start, and without apology. They must, however, understand why they are using it. The point is not partisanship; it is solidarity with everyone who cannot afford Trump or Trumpism.

Those who oppose Trump must embrace the critiques of Bernie Sanders and Elizabeth Warren.

This must be solidarity with the Somali refugees Trump attacked during his late-in-the-campaign trek to Minneapolis, with the Muslims of Dearborn, with the women who are horrified that the United States has elected this crude and violent man to the presidency, with the rural Americans who saw Trump as their only hope and with the displaced workers of every race, class, and creed who responded to the Republican nominee’s empty promises of better trade deals, meaningful work, and a future for their forgotten communities.

Those who oppose Trump now must do so for a common good that has been denied not just by Republicans but by too many elite Democrats. The frustration that Trump capitalized on as an insurgent candidate for the Republican nomination, and then for the presidency itself, is real. Trump’s response was too frequently xenophobic, racist and reactionary; but his wrong reaction does not make the economic and social inequality of our times right.

Those who oppose Trump must embrace the critiques of Vermont Senator Bernie Sanders and Massachusetts Senator Elizabeth Warren—who must be accepted as the leaders of Democratic Party that requires a great reflection and an even greater reformation—along with the programs and policies of Congressional Progressive Caucus leaders such as Minnesota Congressman Keith Ellison and Wisconsin Congressman Mark Pocan. They must utilize the inside-outside strategies of the Working Families Party, National People’s Action, 350.org and the Dreamers and the Black Lives Matters activists and all the groups that have challenged politics as usual far more sincerely than Trump ever has—and than Trump and his Republican allies ever will.

“Tonight Donald Trump was elected president,” read the statement from the Our Revolution movement that extended from the Sanders campaign. “Our job is to offer a real alternative vision and engage on the local and national level to continue the work of the political revolution in the face of a divided nation.”

Trump will stumble quickly. He will not deliver on the promises that he should keep, and he will keep the promises that should be abandoned. Americans will come to realize his election as a profound error of judgement, just as the voters of Great Britain quickly recognized the folly of this year’s #Brexit vote.

Trump has secured an Electoral College majority. But he was not the choice of the majority of Americans who cast ballots for the presidency. And the popular vote, which should elect presidents, will ultimately favor Clinton. This is the place of beginning. Donald Trump has won the presidency. But he has no great mandate. Indeed, the great mandate is with those who can and must oppose not just a Trump presidency but the cruel hoax that is Trumpism.