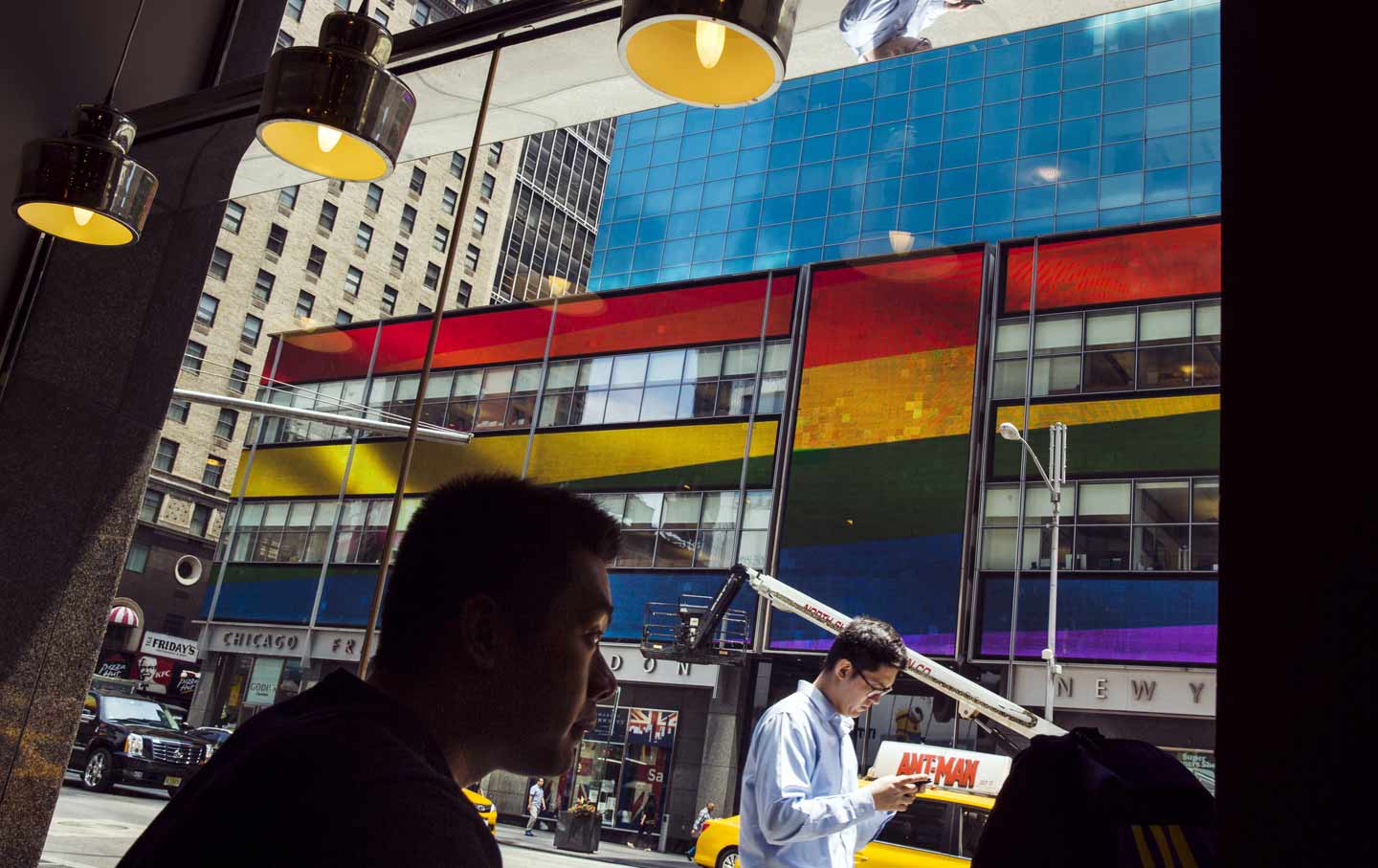 Our society’s image of the gay urban dweller is often white, educated, and financially comfortable. But despite the patina of social progress, there’s a tale of two cities for queer New York, too.

In a comprehensive needs assessment of the city’s LGBT population, the advocacy organization Legal Services NYC finds that low-income LGBT New Yorkers face stunning levels of economic insecurity, employment discrimination, and violence at the hands of community members, intimate partners, and police, as well as barriers to healthcare. These issues often intersect with structural racism and feed a constant undercurrent of discrimination, along with the attendant anxieties of knowing that even in a “gay-friendly” city, structural barriers persist, especially for folks who can’t buy their way around them.

Achieving equality in civil-rights laws and integration into celebrity culture have been defining advancements for the whole LGBT community. But that incremental progress may have come at the expense of attention to poverty issues in mainstream LGBT activism. Adam Heintz, director of Pro Bono Services at Legal Services, tells The Nation, “If we just focus on fighting discrimination against LGBT people…it wouldn’t be sufficient to make their lives healthy and whole.… So if you’re not taking on the fight for affordable safe housing, if you’re not talking about the importance of a living wage, if you’re not talking about protections from violence and harassment from intimate partners, then you’re not going to actually reach a place where low-income LGBT people are safe and lead healthy, full lives.”

Marriage equality is no shield against economic inequality: Poverty nationwide is slightly higher among single LGBT people than it is among their straight counterparts. Despite reforms that strengthen LGBT families’ social and financial rights, surveys show that single LGBT parents and LGBT couples raising children are three and two times more likely, respectively, to have incomes close to the poverty line compared to straight peers.

Interviews with low-income LGBT respondents depict their day-to-day traumas. One interviewee recalled, “I was harassed and bullied on the train by a performer who was making homophobic and transphobic comments. I thought MTA would help me but the MTA workers joined in.” A trans respondent said harassment “often leaves me afraid to leave the house.”

Victimization may come from either the street or the state. While some one in eight respondents said they had been crime victims, 6 and 8 percent reported physical or verbal police attacks, respectively over the past year. While intimate-partner violence had impacted about one in four respondents, LGBT victims who seek law-enforcement help are sometimes “not believed” or “ridiculed,” and transgender victims often face direct police harassment.

Overall about half of those surveyed reported to have experienced at least one forms of serious violence, often repeatedly over time—suggesting patterns of discrimination that could color other forms of hardship, institutional racism, and social instability, including housing, health, and employment barriers.

Despite local and federal fair-housing regulations, about an eighth of respondents reported experiencing housing discrimination such as “landlords who refused to rent to” or mistreated them on the basis of LGBT identity.

About one in 10 trans respondents reported “they could not get the health care that they needed because they are transgender.” The medical attention they do get often leads to painful confrontations. One interviewee stated that at medical facilities, “people will leave me alone for hours, mis-gender me, ask inappropriate questions…and have lots and lots of students come through to see the freak show.”

When navigating the city’s monstrous social-service bureaucracy, some 14 percent of respondents said they “had been treated badly by [Human Resources Administration] staff or security personnel,” with incidents ranging from disrespectful comments to refusing to grant a request to officially change a name. Many homeless trans people must choose between inappropriately segregated shelter facilities rife with hostility, or instead sleeping rough and facing further brutality alone outside.

LGBT immigrants, especially the undocumented, face yet another layer of vulnerability due to precarious legal status, possibly leading to deportation without due process or incarceration in chaotic sex-segregated facilities. They suffer the added vicious irony that many may be seeking asylum from persecution, only to become ensnared in a biased, arbitrary asylum application process.

To build on recent advancements in LGBT civil rights, such as New York City’s expansions of anti-discrimination protections for trans and gender non-conforming people, Legal Services calls for expanded resources for legal advocates, as they fight for access to benefits or seek accountability for law-enforcement misconduct. Meanwhile, government agencies and courts need comprehensive culture-change measures and staff trainings to ensure that LGBT clients are treated with dignity and inclusiveness, particularly those doubly hit by social and economic marginalizaton.

“The LGBT movement has to also take on poverty issues and take on racial injustice issues and…other forms of inequality and oppression,” Heintz argues, “in order to effectively achieve its own goal of finding liberation and equality for LGBT people across the board.”

Following celebrated victories in legislatures and courts, the fight for formal legal equality has inadvertently highlighted the barriers that economic deprivation still poses for many in the LGBT community. They’re still struggling in the shadows, behind the political spotlight.