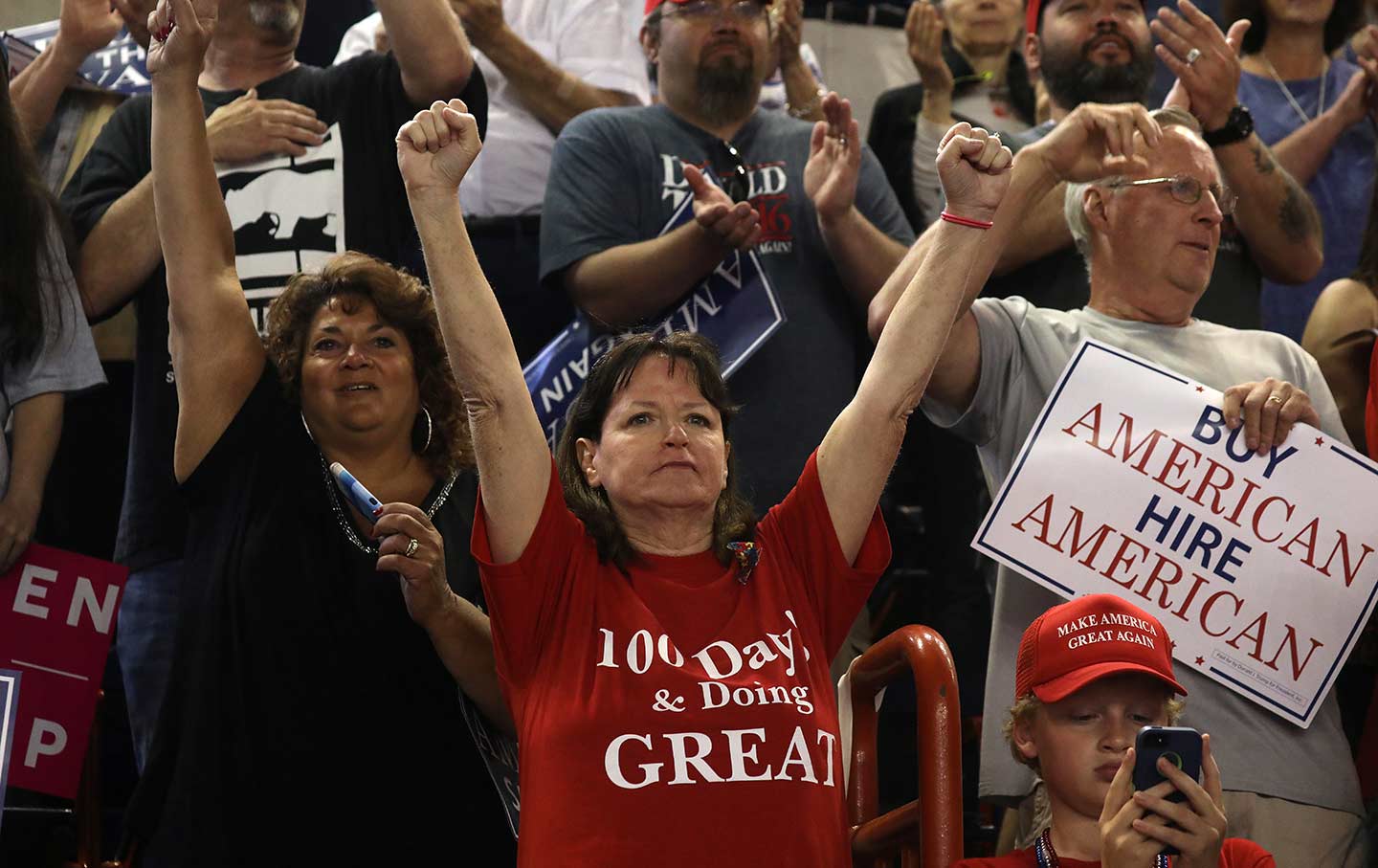 People cheer as US President Donald Trump appears on stage at a rally in Harrisburg, Pennsylvania, on April 29, 2017. (Reuters / Carlo Allegri)

In the first 100 days that Donald Trump has been in office, arrests for immigration violations have increased 38 percent over to the same period in 2016, according to figures Immigration and Customs Enforcement released Wednesday. More than 41,000 people have been arrested.

His Muslim ban remains tied up in the courts, and judges have issued early setbacks to his attempts to withhold federal funding from sanctuary cities, but this week’s announcement is robust proof that Donald Trump has indeed managed to translate his fiery anti-immigrant campaign rhetoric into an actual policy agenda targeting undocumented immigrants.

“ICE agents and officers have been given clear direction to focus on threats to public safety and national security, which has resulted in a substantial increase in the arrest of convicted criminal aliens,” ICE Acting Director Thomas Homan said in the statement. “However, when we encounter others who are in the country unlawfully, we will execute our sworn duty and enforce the law.”

That last sentence is key, and is the crux of how the Trump administration has pursued the expansion of its enforcement efforts. On January 25, after barely a week in office, Trump released an executive order laying out who among the nation’s 11 million undocumented immigrants would be prioritized for removal from the country. The short answer: just about everyone. While President Obama—who, it should be noted, deported a record-breaking 2.8 million people while in office—set a series of enforcement priorities ostensibly focusing on gang members and those who’d been convicted of the most serious offenses, President Trump obliterated them. Under his watch, any deportable person who had been convicted of a crime, or charged but not yet convicted of a crime, or who had even committed a “chargeable criminal offense,” would be “prioritize[d]” for removal. Those who’d ever committed fraud before a government agency—like using a fake Social Security Number to work, which is an often inescapable part of undocumented life—would also be prioritized.

Trump’s DHS is not embarrassed by pursuing immigrants with little or even no criminal record.

But the big whammy came at the end. The federal government now will pursue the removal of anyone who, “in the judgment of an immigration officer,” poses “a risk to public safety or national security.” In other words, anyone that any immigration official feels like deporting. A memo written by Department of Homeland Security Secretary John Kelly operationalized that mandate, authorizing immigration officers to round up anyone they encounter who is in the country without authorization.

According to ICE, nearly 75 percent of those arrested between January 22 and April 29 had been convicted of a crime. The release called out the most serious—homicide, rape, kidnapping, and sexual abuse—and said that violent crimes “accounted for more than 2,700 convictions” of the 41,318 people who’d been arrested on immigration violations. The release did not give any further breakdown of how many had been convicted of such serious violations, nor did it mention the other sorts of crimes people had been convicted of. “We do not have statistics to the specificity of criminalities,” Rachael Yong Yow, a spokesperson for ICE, said in an e-mail when The Nation requested this information.

Some of the more typical crimes that undocumented immigrants are convicted of are crimes related to their immigration status. Driving without a license, for instance, is a common conviction for those who are undocumented. Prosecutions of those who reenter the country illegally is the most frequently prosecuted immigration-related federal crime.

“We’re not talking about dangers to the public, we’re talking about people trying to work or rejoin their families,” said America’s Voice Executive Director Frank Sharry in a statement responding to the data release.

Trump’s Department of Homeland Security, unlike Obama’s before him, is not embarrassed by the fact that it has built its enforcement growth by pursuing those with little or even no criminal record. Indeed, in its statement, ICE touts this new reality. “ICE will no longer exempt any class of individuals from removal proceedings if they are found to be in the country illegally,” the announcement reads. “This is evident in the rise in non-criminal arrests over the same period, which increased from approximately 4,200 in 2016 to more than 10,800 in 2017.”

As significant a departure as this is from President Obama’s stated policies, the Trump administration is not yet arresting as many people as Obama did at the height of his administration’s enforcement spree. In the same 100-day period in 2013, Obama’s DHS arrested 64,903 people. Among them, 16,877 had no criminal history, The Guardian reported.

The reality is that, for many years of his presidency, Obama pursued a very similar agenda to Trump. As president, Trump has sought to build on that already robust deportation infrastructure, with the help of his baldly xenophobic rhetorical bent. Wednesday’s news is the first major confirmation of this new era.