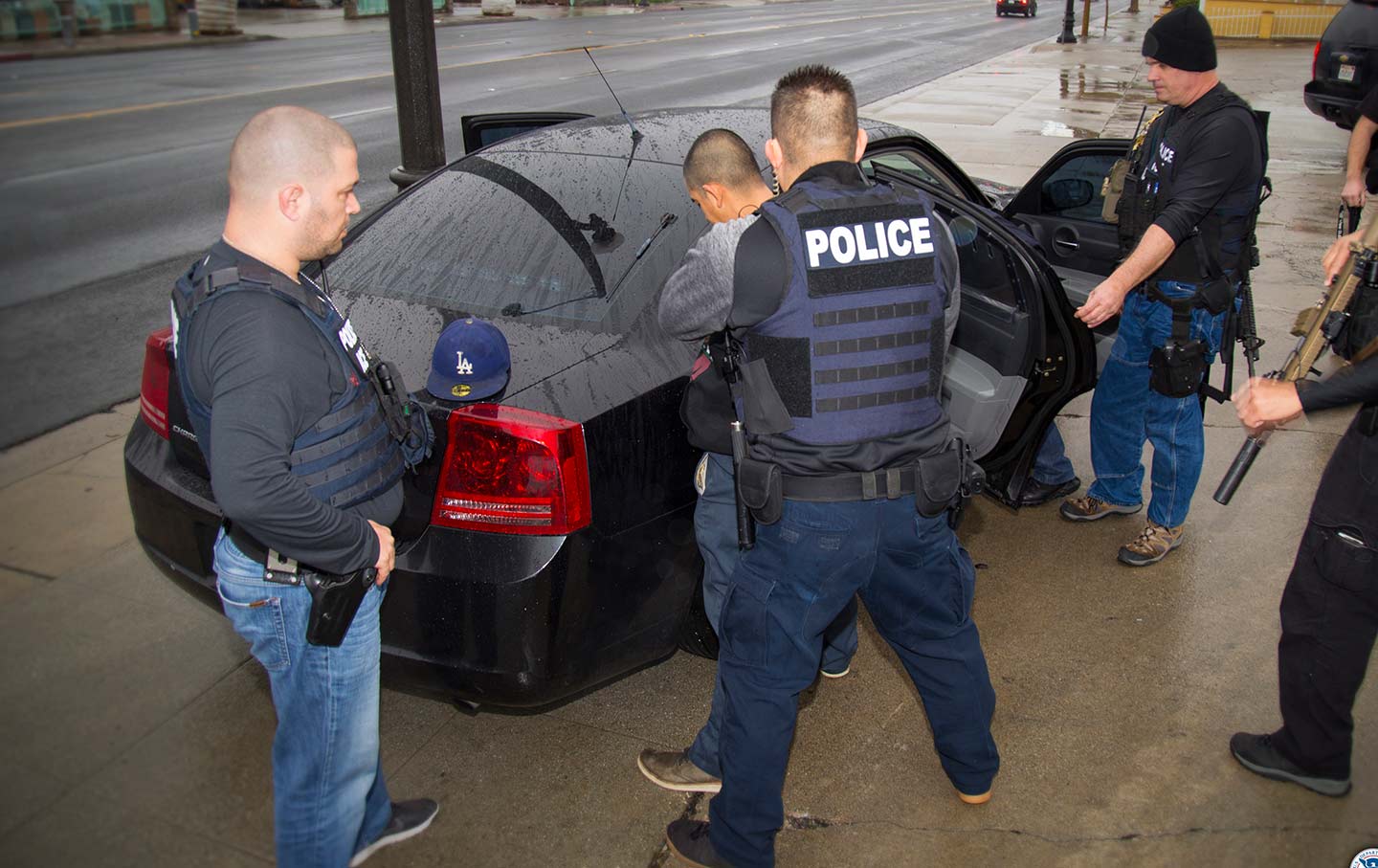 Immigration and Customs Enforcement announced last week the results of what it considered to be a law-enforcement victory. In September and October the federal government arrested 267 people labeled members or associates of the multinational gang Mara Salvatrucha, or MS-13. The gang, with tens of thousands of members throughout the Americas, operates transnational criminal networks. In the United States, its members have been arrested for recent and gruesome murders in Boston, Long Island, and Virginia, and the Trump administration has singled out the gang as the worst threat to the safety of people in this country.

In a July speech laden with violent imagery, Trump called MS-13 gang members “animals,” and told law-enforcement officers that gangs “have transformed peaceful parks and beautiful, quiet neighborhoods into bloodstained killing fields.” In October, Sessions addressed MS-13 gang members directly in a speech. “We will find you. We will devastate your networks,” he said. “We are coming for you. We will hunt you down.”

But in its communications push this week, ICE inadvertently admitted exactly what critics have accused the Trump administration of: In order to make so many arrests, ICE collaborates with local law-enforcement agencies that stack gang databases with the names of people who not only are not gang members but who also pose no public-safety threat. But by leveraging the fearsome reputation of MS-13 as political cover ICE and collaborating law-enforcement agencies are able to identify, criminalize, detain, and eventually deport large numbers of immigrants of color. 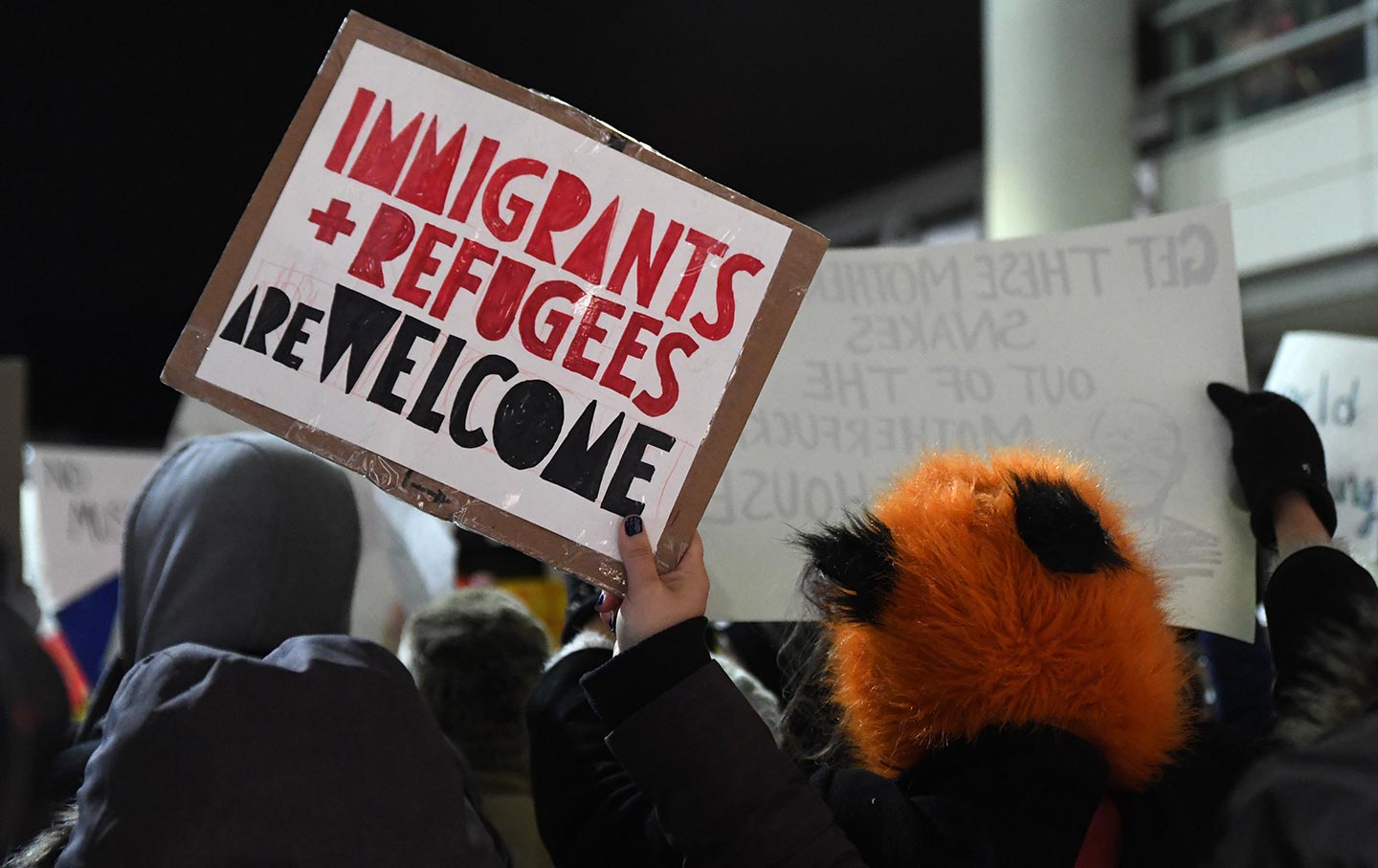 In a CBS report that aired the morning ICE announced Operation Raging Bull, an ICE agent named Jason Molina admitted during a predawn raid on a supposed gang member that the only known crime the suspect had committed was being undocumented.

“He entered the country illegally so—and then he went through the immigration process and a judge ordered him removed,” said Jason Molina, assistant special agent in charge.

“Yes. We have information, we have pictures of him actually flashing gang signs,” Molina said.

But gang membership is not a crime, and the agents did not have a criminal warrant. They only weapons they found were “either pellet guns or BB guns,” Molina said.

But Molina’s team was still able to make the arrest based on the suspect’s immigration status—part of the unique mandate of the Homeland Security investigations unit of ICE. An hour later, they nabbed a second suspect. Molina said he is an MS-13 associate.

“So his known crime is entering the country illegally?” Brennan asked.

“But that’s it at this point, that’s all you definitely know?” Brennan asked.

“That’s correct. The purpose of classifying him as a gang member or a gang associate is because once he goes in front of an immigration judge, we don’t want him to get bail, because the whole point of this operation is to get these known gang members off the street,” Molina said.

To recap: A 12-person law-enforcement team staged a predawn raid, without any criminal warrant, on a person whose only known violation was entering the country without authorization, and who was ultimately being arrested as a wanted gang member because photographs had surfaced of the suspect flashing “gang signs.” A second person, whom law enforcement had labeled a “gang associate,” was arrested only for the offense of being undocumented.

According to ICE’s press releases, gang members are people who (1) admit that they are, (2) are convicted of violating a state or federal law that criminalizes gang-related activity—though, it must be reiterated, simply being a member of a gang is not in itself a crime—or (3) if “they meet certain other criteria such as having tattoos identifying a specific gang or being identified as a gang member by a reliable source.”

Gang members are different from gang associates, who, according to ICE, “exhibit gang-member criteria but who are not formally initiated into the gang.” ICE leaves it up to law-enforcement officers’ discretion to determine “whether indications of gang association are present by referring to the gang membership criteria.”

The definitions of what constitutes gang membership are so wobbly, and ICE and local law enforcement give officers such wide latitude to decide who is and isn’t dangerous that the whole setup is an invitation for racial profiling in policing, critics warn. It’s this very combination of nebulous definitions and aggressive policing that concerns those who are most concerned about immigrants and public safety.

“There are supposed to be a variety of factors [to determine gang membership], but it ends up being up to the individual police officer,” said Tania Unzueta, legal and policy director for Mijente, a Latinx organizing group. Unzueta, who’s based in Chicago, has been working on a campaign to fight the city’s use of gang databases, which are maintained with little transparency or oversight. She pointed to the case of Wilmer Catalan-Ramirez as a prime example of how ICE and Chicago police abuse the city’s gang databases.

In March of this year, ICE raided the home where Catalan-Ramirez lived with his his wife and 3-year-old son. Catalan-Ramirez was brutally arrested as part of Chicago’s “gang ops” after police identified him as a gang member, even though he has never had any affiliation with Chicago street gangs, according to a lawsuit that the National Immigration Project of the National Lawyers Guild filed on the Catalan-Ramirez family’s behalf.

Catalan-Ramirez, who was already recuperating from prior injuries, ended up after the arrest with a fractured left shoulder and a loss of vision in his left eye. Eight months later he remains in ICE custody. The lawsuit charges that ICE agents unlawfully entered Catalan-Ramirez’s home without his partner’s permission and without a warrant, that ICE agents used excessive force against him, and that since his incarceration he’s been denied necessary medical care for his injuries.

One of the worst aspects of the gang database, Unzueta says, is that a person cannot find out whether they’ve been added to this database, and if they do learn that they are in the database, they have neither the ability to challenge their inclusion nor the right to remove themselves from it.

And it’s not just Chicago. The District of Columbia, Maryland, and Virginia area is home to a large population of Central Americans, and MS-13 is known to be active in the region. Four of the Operation Raging Bull arrests took place in Baltimore.

But immigrant-rights advocates there also take issue with how gang databases are maintained. “A kid told me the police told him he was on some sort of gang-member list,” said George Escobar, the senior director of human services at CASA de Maryland, a statewide immigrant-rights advocacy and organizing group. But, Escobar recalled, the young person told Escobar, “All I was doing was sitting on my porch.”

“We’re really angered by how these people are described and classified together as gang members, when to begin with there is no consistency and so much secrecy and conflicting information about what these gang databases have in them,” Escobar said.

ICE typically relies on the gang databases maintained by state and local law-enforcement agencies to identify gang members, said Paromita Shah, associate director of the National Immigration Project of the National Lawyers Guild. “But when you combine the inherent flaws within policing and the definitions that they use to engage in this policing, you’ll find that there are not only errors but problems.”

Shah added, “It does raise racial profiling and due-process, notice, and accountability issues.”

People have been put on gang databases for as little as living in an area that’s considered a high-crime gang neighborhood, wearing a red jersey, or being caught hanging out in the living room of a cousin who may be involved with gangs.

Gangs are a complex and serious problem, both Shah and Escobar said. But ICE’s operations suggest that the agency conducts its operations “more as a PR attempt to solidify support from their base than anything based on legitimate law-enforcement practice,” said Escobar. “And just coincidentally, more than half of the people swept up are innocent folks that have no connection to the people they’re targeting.”

Indeed, ICE’s own statistics from Operation Raging Bull reveal its larger tendency to use operations supposedly targeting people with significant criminal backgrounds in order to pull in many more who have nothing to do with the operation’s stated purpose.

Of the 214 people ICE arrested in the United States, 93 were arrested on charges like illegally reentering the country and for more serious crimes like trafficking, aggravated robbery, domestic violence, and even homicide. But “the remaining 121,” reads ICE’s own press release, “were arrested on administrative immigration violations.”

Flimsy pretexts for terrorizing raids on people who may not even be public-safety threats aside, there’s more. The most surprising admission from the CBS report comes at the very end, when ICE agent Jason Molina says, “The purpose of classifying [the suspect] as a gang member…is because once he goes in front of an immigration judge, we don’t want him to get bail, because the whole point of this operation is to get these known gang members off the street.”

And here the ICE agent lays it out plainly: For ICE, the database is the weapon. Labeling immigrants gang members—whether or not they’ve been suspected or charged (let alone convicted)—of any crime is what will keep them from ever being free in the United States again. The stated aim of the operation is supposedly public safety, but upon closer inspection the execution looks a lot like indiscriminate roundups of immigrants of color.

And ICE promises that there will be much more to come. “We are now combating the gang with renewed focus and an unprecedented level of cooperation among DHS’s components and our domestic and international partners,” ICE Deputy Director Thomas Homan said in a statement touting the initiative.

“We will not rest until every member, associate, and leader of MS-13 has been held accountable for their crimes, and those in this country illegally have been removed.”