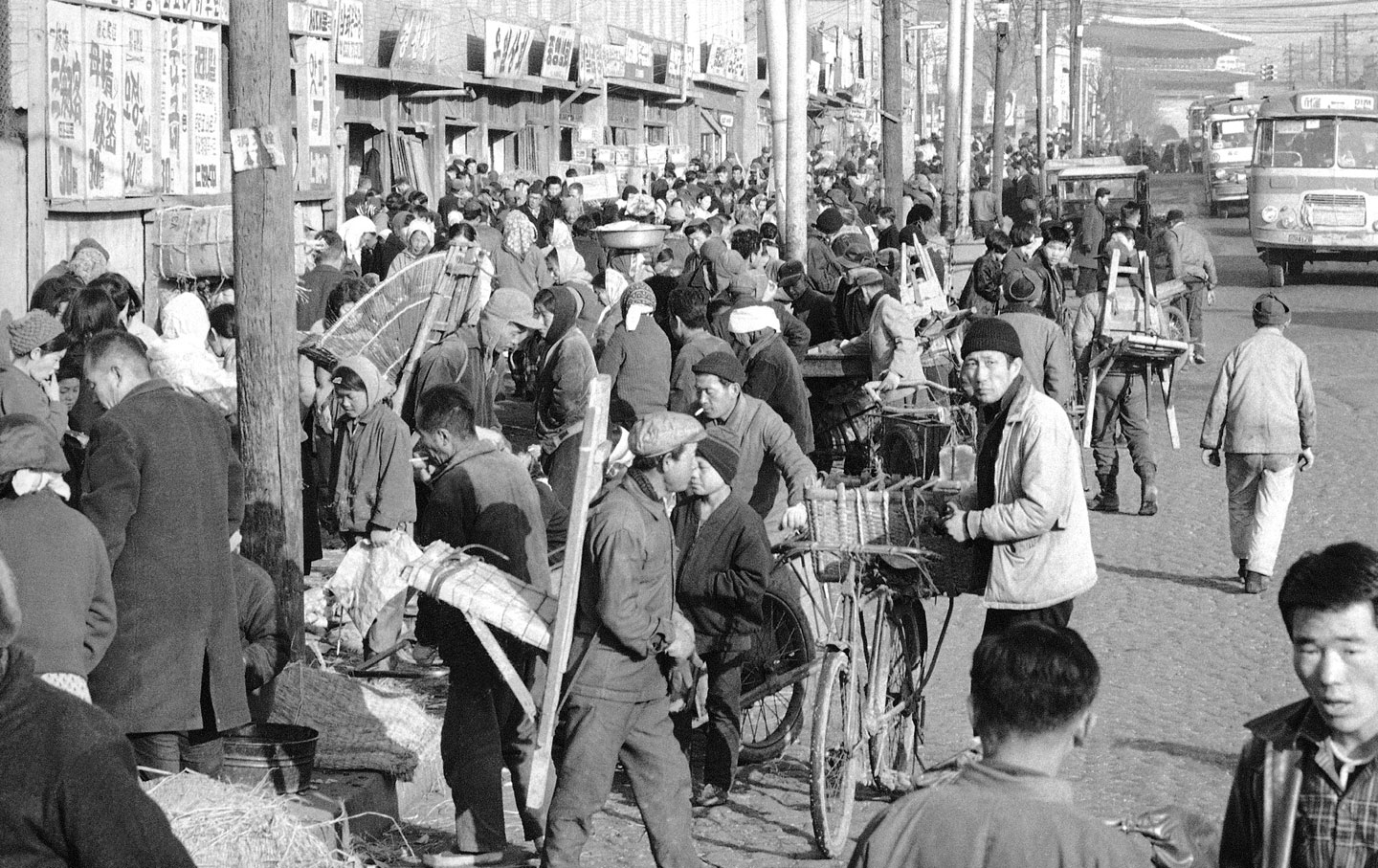 A city’s health is measured in many ways, but there is no surer vital sign of an Asian metropolis than the old-fashioned, swap-meet-style market. In Seoul’s above- and belowground bazaars, street vendors and stall merchants deal their endlessly catholic wares. I daydream about these sellers of kimchi stew, bootleg ’70s CDs, dried anchovies, vintage postage stamps, jeggings, and handmade paper, and the tailors, woodcarvers, jewelers, and technicians whose skills are belied by their concrete-and-linoleum surroundings. The noisy, crowded space of the bazaar reminds us just how massive and vital the working class is.1

This is a familiar world for the Korean writer Hwang Jungeun. For a time, she worked in her father’s electronics-repair shop in Seoul’s Sewoon Market, a multistory complex built in 1968—and recently adopted by hipster artists. In photos of her father’s store, stacks of speakers, amplifiers, turntables, and jagged spare parts tickle the ceiling, and used coffee cups and unnamable metal scraps crowd out his desk. Hwang draws on these objects to give texture to One Hundred Shadows, a short 2010 novel whose new English translation is among the most affecting books I’ve recently read.2

In prose as spare as its setting is cluttered, One Hundred Shadows tells the story of a sprawling 40-year-old electronics market and its quirky knot of inhabitants. Yet the book begins in an eerie natural landscape, to which the narrative periodically returns. Here are the twentysomething innocents Eungyo and Mujae, buzzing with feelings deeper than friendship, lost in a forest whose shapes seem to bend:3

We carried on walking.
Now and then twigs snapped beneath our feet, sounding like wet bones breaking.
Mujae, I said, about sex. Do you think it’s really that good?
It must be, don’t you think? …
Should we try it, when we make it out of here? …
I want to do it with someone I like.
Like someone, then.
Who?
Me.4

Eungyo, who was raised by a single dad and bullied out of high school, is the assistant to Mr. Yeo, who operates a repair shop on the fourth floor of Building B. (In the universe of the market, each building, A through E, is its own galaxy.) Her companion, Mujae, whose father died after suffering financial ruin, holds an analogous job in Mr. Gong’s transformer workshop. Their labor in the electronics market, while humdrum, affords escape from Korea’s oppressive class distinctions and the totalizing logic of its economy, dominated by Samsung, Hyundai, LG, and and the other family-run statist conglomerates known as chaebol. This unhurried alternative space is home to septuagenarian craftsmen who heal old German amps; Omusa, a store that stocks infinite varieties of “fingernail-sized” light bulbs; and “shops selling cables and all kinds of tools, then a row that specialised in repairing clocks and watches.” (Coincidentally, another East Asian book about an idiosyncratic amplifier technician was published in translation last year: The Invisibility Cloak, a brisk, snarky novella by Ge Fei, translated by Canaan Morse.)5

Eungyo and Mujae share a curious secret: Their shadows “rise”—pull up, off, and away from their bodies, à la Peter Pan—in times of trauma and uncertainty. On their forest walk, Eungyo feels a disquieting tingle as her outline lifts and returns: “Look, Mujae said, and I turned to look in the direction he was pointing.” Her shadow “had become itself again, stretched out alongside Mujae’s towards the woods from which we’d just emerged.” Soon, the two discover that others in the electronics market have lost control of their own disobedient shades.6

In One Hundred Shadows, every stranger is wonderfully strange. Eungyo is the primary narrator, but the “I” occasionally shifts, and some characters tell stories about themselves in the third person. In one such passage, Mujae and Eungyo befriend Yugon, a Rain Man–like figure who hangs out in Building B. Over rice wine at a neighborhood dive, Yugon tells them how he kills the wood lice that have infested his room (take a thick Bible, “open it up, aim, and throw”), and then rambles on to a more serious tale. When Yugon was just 12 years old, his father, a construction worker, was killed in a crane accident. After the funeral, his mother came home, “carrying a shadow on her back.” Yugon inadvertently angered the dark mass, which started to growl like a didgeridoo while “opening and closing something that might be called a mouth, a little hole set into its darkness.”7

The characters’ tragedies and workaday lives are elevated, or at least better understood, in the expanse of the bazaar. But their beloved market is slated to be dismantled. Early in the book, Eungyo spots a notice for a pre-demolition tenants’ meeting and brings it to her boss’s attention. “He said that there’d been talk of demolishing the market for a long time, but that nothing concrete had ever come of it…. But a new notice appeared after the date of the meeting had passed, and banners were hung up, and everything started to feel very uncertain,” she explains. Around the same time, Eungyo’s shadow begins to rise.8

The threat of displacement and the struggles of Korea’s urban underclass are leitmotifs in Hwang’s writings, which include two other novels and two short-story collections. (This is her first novel to become available in English, thanks to Tilted Axis Press and the gentle touch of translator Jung Yewon.) Hwang has also been active in the Candlelight Movement protests that recently ousted conservative president Park Geun-hye. In One Hundred Shadows, the characters’ fleeing silhouettes represent a sense of powerlessness and dread, and embody their family members’ unsettled grievances. Korean-literature scholar Eun-Gwi Chung has compared Hwang’s “distinctive mingling of fantasy and reality” to the style of Cho Se-hui, best known for his surrealist novel The Dwarf (1978).9

It’s rare for a story to be so dense in social meaning yet so lightly composed. Using few words, Hwang conveys intense emotion—Eungyo’s final impressions of her delinquent mother, for instance: “The texture of a calico skirt, its hem balled in my tiny fist; the scent of chewing gum; slender arms.” Later, in the middle of a blackout, as risen shadows merge with their surroundings, Eungyo asks Mujae to tell “a story about the boy Mujae.” His reply is coolly matter-of-fact: “The boy’s father died…. The boy went on living.” “Okay,” Eungyo says. And we, as readers, wait a beat to line up our thoughts.10

Escape From the DPRK

Parts of the book are set in elliptical spaces that, on film, might be marked as surreal by an uncanny color of sky. The novel begins in a forest and ends on a mysterious island; in between, emancipated shadows roam the city. As the fate of Building B becomes grimly clear, Mujae’s rises “about half a hand’s span up off the floor” and wrestles with him in bed, “clinging so tightly I could barely even twitch my limbs.” When newspapers call the neighborhood around the electronics market a “slum,” Eungyo and Mujae attempt to throttle the insult through repetition: “Slum. / Slum. / Slum. / Slum.” Hwang uses the English “slum” in the Korean text—romanized into two syllables, seul-leom—imparting all the more this sense of alienation.11

The original version of Hwang’s One Hundred Shadows includes two afterwords typical of Korean novels: a brief note by the author and a critic’s response. Hwang’s sign-off is unconventional, written not in prose but as an incantatory poem, implicitly dedicated to Eungyo and Mujae:12

Hwang leaves Eungyo and Mujae much as she introduces them: walking under a pale moon. Next to a streetlamp, Eungyo tells us, “a tall, slender shadow was swaying…and the darkness had obliterated the ground, making it impossible to tell whether it was Mujae’s or mine.” They are standing or floating, living or ghosts, far from Building B.14