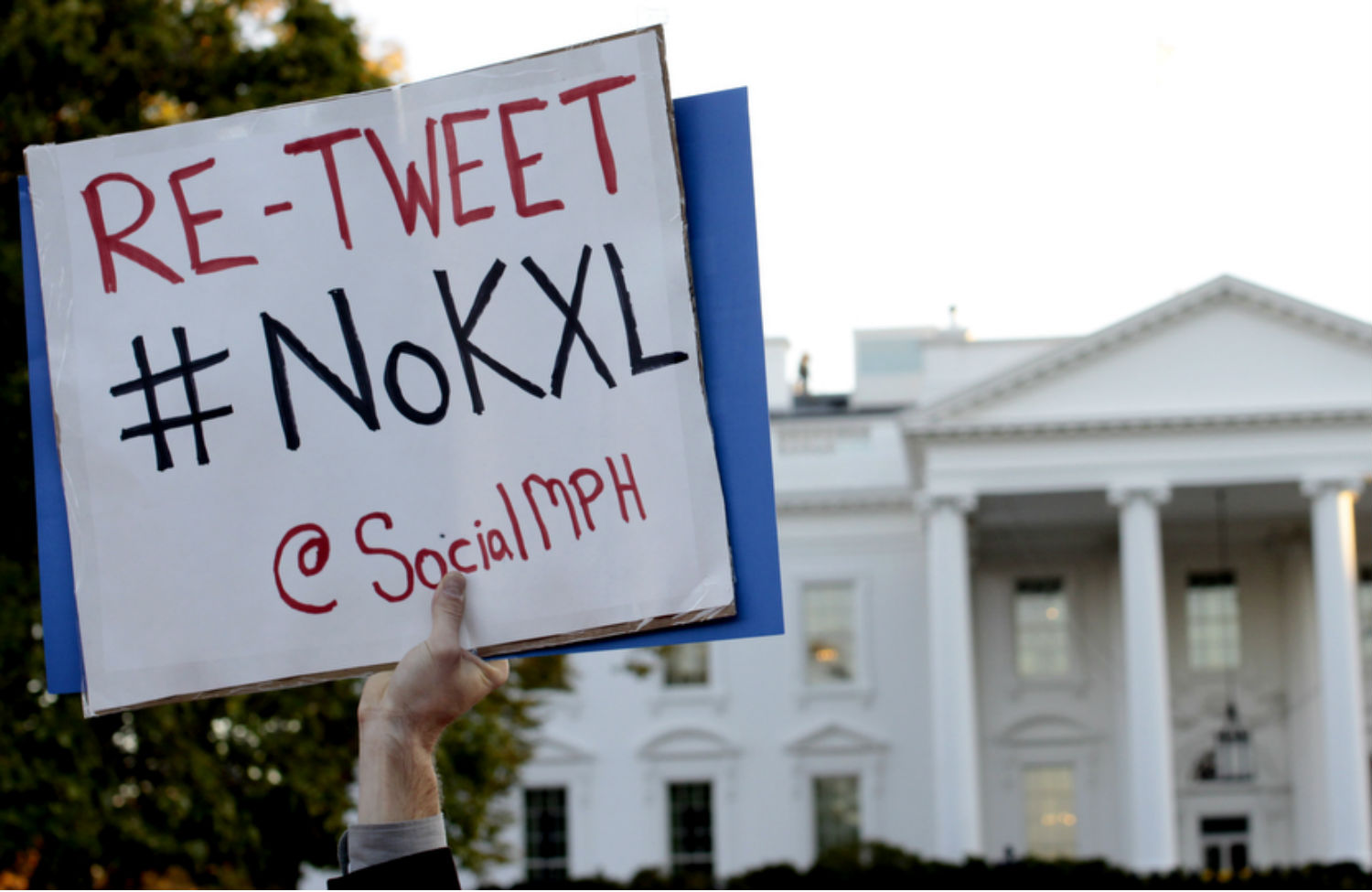 A Keystone XL protester holds up a sign in front of the White House. (Emma Cassidy, tarsandsaction/Flickr)

Activists are participating in hundreds of nationwide protests on Monday against the proposed Keystone XL pipeline.

The State Department released a long-awaited environmental review of the pipeline Friday that found the project would have a “negligible impact” on climate change, a decision that bolsters the case for the controversial project.

The pipeline would ship 830,000 barrels of oil a day from Canada to Texas Gulf Coast refineries.

<>Environmentalists and advocates were quick to point out that the State Department’s inspector general is conducting an inquiry into whether the contractor tasked with the study, Environmental Resources Management, failed to disclose recent work it did for TransCanada, the company proposing to build the pipeline, which would be an obvious conflict of interest.

“The release of the new report will be a green light to escalate our efforts,” May Boeve, executive director of 350.org, said to the Los Angeles Times. “This fight got started at the national level when 1,253 people got arrested in front of the White House. We expect many more people will take part in civil disobedience and take to the streets before this fight is over.”

“This is an all-hands-on-deck moment to send the message to President Obama that Keystone XL fails his climate test and he must reject it,” the consortium said.

Furthermore, farmers and ranchers in Nebraska who opposed the pipeline are planning to run for seats on a state board that regulates power stations that are needed along the project route, the AP reports, and national activists say they have recruited more than 75,000 volunteers willing to participate in civil disobedience.

“We’ve said from the beginning that we will support the landowners and what they want to do and what they think is best for their property. I think you’ll see some landowners driving really slow on their county roads to block the [pipeline] trucks,” said Jane Kleeb, executive director of Bold Nebraska.

In addition to Monday’s protests, activists plan to stage “pipeline meet-ups” throughout February to encourage people to raise the pipeline issue with candidates in the 2014 elections. Activists are also waiting on a decision from a Nebraska judge on a lawsuit challenging a state law that allowed the project to proceed. That ruling is expected by late March.

According to Kleeb, 115 landowners in Nebraska are still refusing to sign agreements with TransCanada and would also be willing to engage in nonviolent civil disobedience if the company tries to lay pipe through their land.

“We will make sure folks know that we have not gone away, that we are still fighting this pipeline,” Kleeb said to the AP.

One of Monday’s scheduled protests is being organized by Olympic Climate Action in Port Angeles, Washington. In a statement, the group quoted NASA scientist James Hansen as saying extracting the fossil fuels in the Alberta tar sands means “game over” for the climate.

“We are for a sustainable world, one where all people, both now and into the future, have access to a decent livelihood. There is work to do conserving energy and producing it more sustainably. We cannot let the oil age preclude a future for our descendants,” the group said in its statement.

“It’s really an overwhelming problem. Coming together as a group is more successful than sitting around worrying about it,” said Ed Chadd, a founding member of the action group.