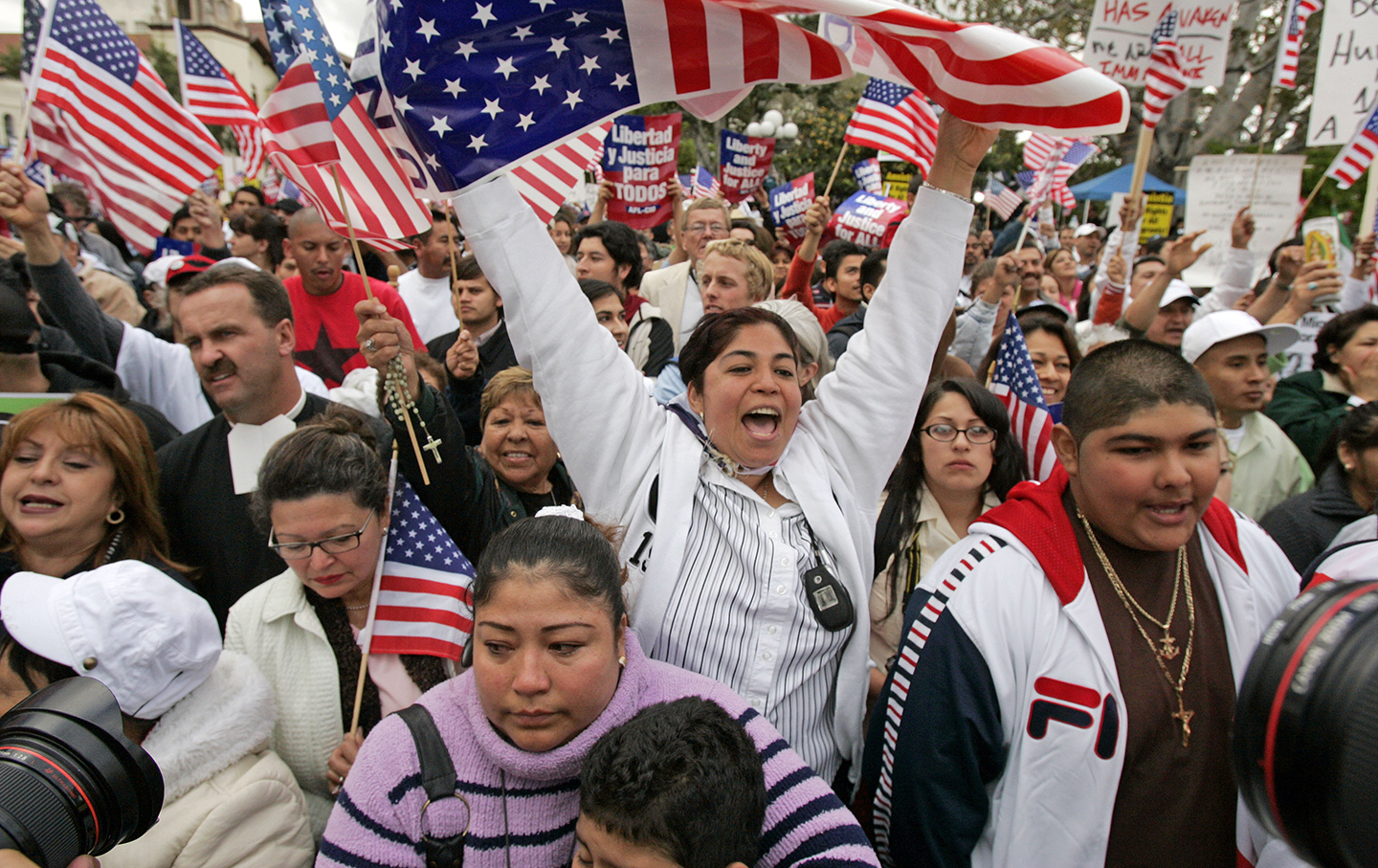 With the Trump administration intensifying attacks on Native Americans, immigrants, refugees, trans individuals, Muslims, women, people of color in general, and the poor, a coalition led by immigrants and workers is aiming to mark this year’s May Day with the biggest workers strike in over a decade.

This year’s “A Day Without Immigrants” comes after a similar call in February and over ten years after the 2006 May Day strike that brought more than one million people out in protest against the Republican-sponsored draconian Sensenbrenner Bill. The proposal sought to criminalize undocumented immigrants and those close to them, and to reinforce tougher border security. In large part due to forceful organizing efforts by grassroots immigrants rights and social justice groups, the Sensenbrenner Bill was defeated.  The protests also made May Day, which started in the late nineteenth century during the fight for the eight hour work day, a powerful tool in the fight for immigrants rights.

Of course, while that particular proposal failed to become law, the anti-immigrant sentiment that fueled it remains embedded in the minds of many Americans and elected officials.

Monday’s May Day Marches Could Be the Biggest in Years

The core of this year’s action is a nationwide May Day strike. Organizers are asking immigrants and allies to skip school, work, shopping, and banking to show the value and power of our labor and purchasing power, and to reject discrimination and hate. The aims of the strike look beyond the Trump administration and beyond even attacks on immigrants, as the 6th Annual Immigrant Worker Justice Tour #May1Strike wrote in the description of their event: “When workers, immigrants, women, Muslims, black and brown, indigenous, queer and trans communities face exploitation, criminalization, incarceration, deportation, violence and harassment, we strike.”

You can take the pledge to join “La Huelga,” or “the strike,” by signing up here. You can also check out Cosecha’s guide to participating here and its guide to supporting workers (including donating to a strike fund or providing legal support) here. If you’re a student, staff member or professor at a university or college, The Nation has partnered with the International Women’s Strike to promote their specific call for anyone working at universities to join the strike in solidarity. You can sign that pledge here.

Beyond the strike, there will be demonstrations, teach-ins, marches, and rallies in over 40 cities across the country.  You can also find a full list of events coast to coast here and from Beyond the Moment, a new coalition fighting for racial justice, here.

The day begins with a rally and direct action organized by Make the Road NY as part of the Corporate Backers of Hate campaign. Participants are asked to meet at Bryant Park at 7:15 in the morning. You can find more information here.

Rise Up New York!, a coalition of labor and immigrant rights groups, faith and community organizations, including Make the Road NY, New York Immigration Coalition, the Arab American Association of New York, among many more, are coming together to protest the president’s attacks on immigrants, refugees, and Muslim communities and demand worker protections, decent wages, and access to good jobs. As many as 50,000 people are expected to march starting at Foley Square at 5:00PM. For more information, visit: MayDayNY.org. Events will also be happening throughout the day, including rallies in Union Square and across the state.

The “Resist Los Angeles” March and Rally is set to start at 11:00AM at MacArthur Park and conclude in front of City Hall. The coalition, which includes the Los Angeles Black Worker Center, the California Dream Network, and the Central American Resource Center (CARECEN), to name a few, hopes to engage at least 100,000 people. For more information on this event and others taking place across California, visit: http://weresist.la and http://calaborfed.org/may-day-2017.

The Black & Brown Workers Collective and Juntos are organizing a strike and citywide march called A Day Without Immigrant, Black and Brown Bodies. The day of action stresses the ongoing attacks of the Trump administration on immigrants, as well as LGBTQ people, black and brown communities, HIV positive people, women, and more. To participate in the rally, meet at Philadelphia City Hall at 12:00PM. For more information, visit: Un Día Sin Immigrant, Black & Brown Bodies event page.

A group of restaurant owners, calling themselves the Popular Alliance for Undocumented Workers’ Rights, will be closing their doors in solidarity with immigrant workers. There will also be a potluck in South Philadelphia to feed the community and honor striking workers. For more information, visit: http://www.pauwr.org/adaywithoutimmigrants.

Puente Human Rights Movement is marching on May Day to demand the end of state violence and the criminalization of communities of color, and to demand ICE be removed from local jails. The group will be marching to the Arizona State Capitol on May 1st, 2017 at 4:00PM. To learn more, visit: May Day: Todos Marchamos event page.

Organizers in Boston are marking the day with the 1st Cosecha/Harvest Festival. They are calling on participants to withhold their purchasing power and labor and instead join the community in dance, music, and art starting at 9:00AM. To learn more, visit: Festival de Cosecha, A Day Without Immigrants event page.

Día Sin Inmigrantes is calling on students, immigrants, and workers to strike and take to the streets to march and demand respect, dignity, and protection for all. The rally starts at 5:00PM at 294 Hernando St. For more information, visit: Dia Sin Inmigrantes event page.

Cosecha Tulsa, in collaboration with the New Sanctuary Movement, will be holding a rally all day as well as a vigil outside of the David L. Moss Criminal Justice Center at 7:00PM to demand the administration stop separating families, and call for a stop of deportations of the working class. To participate, visit Cosecha Tulsa’s Facebook page.