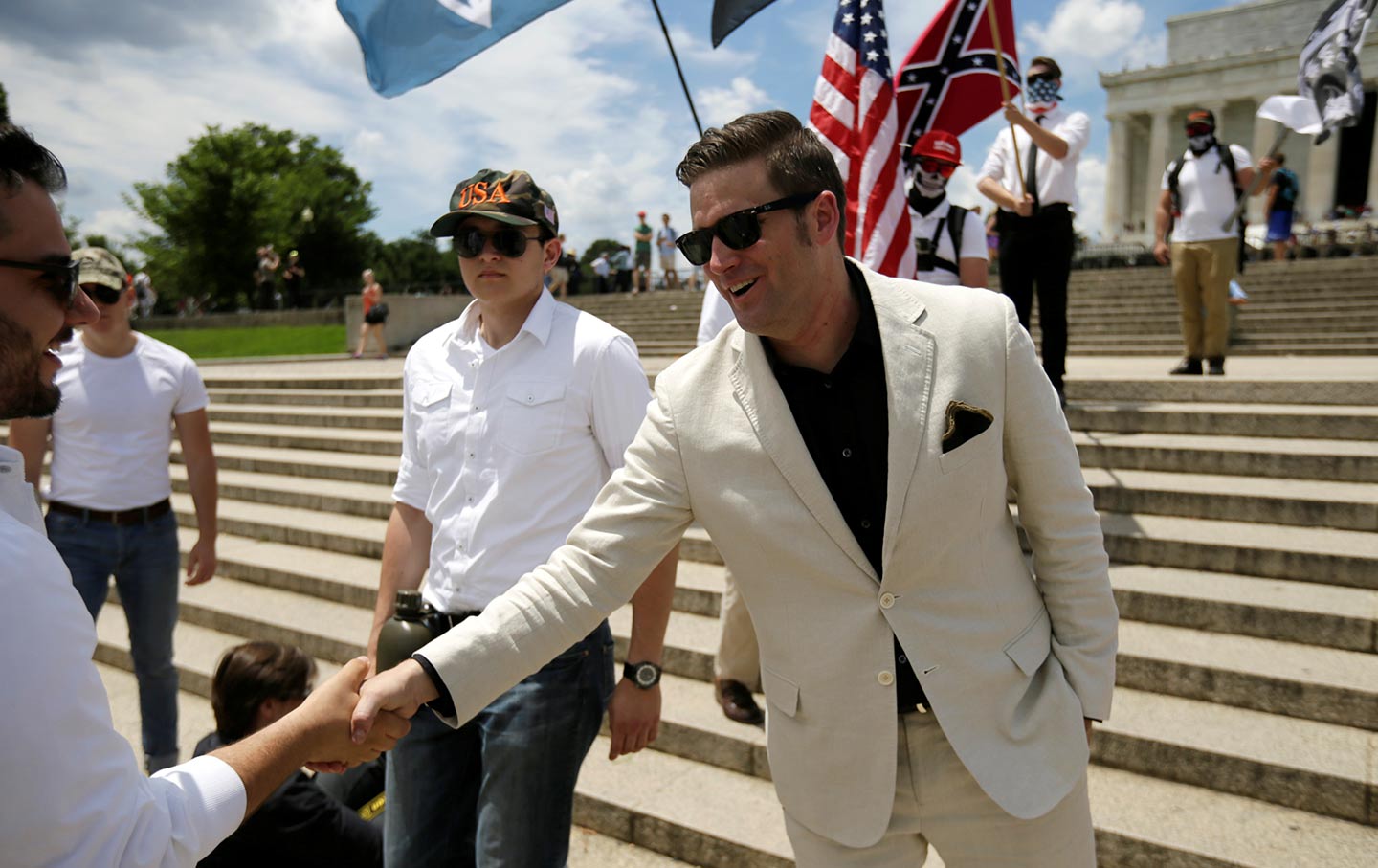 White Nationalist Richard Spencer (R) greets his supporters as activists gather for what they called a "Freedom of Speech" rally in at the Lincoln Memorial in Washington DC this past June. (Reuters /Jim Bourg)

Last fall, Derek Black visited the Kennedy School of Government at Harvard University to talk about hate. Derek is the son of Don Black, the founder of Stormfront.org, the oldest and one of the most influential hate sites on the Internet, boasting some 300,000 members, according to the Southern Poverty Law Center. The site features vile anti-Semitism—“the Jewish problem” and the alleged Jewish conspiracy to “rule the world” figure prominently—as well as old-school white supremacy, with references to the “Browns and Blacks” flooding the United States and Europe. I joined Derek on a panel to learn more about his father’s teachings and also why he had abandoned them.

Derek is a soft-spoken, wide-eyed twentysomething with a round face and a mop of reddish-brown hair. He’s thoughtful, clear and careful in his speech—a perfect example of how the movement’s leaders have cultivated a politics of respectability. Supporters must follow the New Orleans Protocol, a code of conduct signed by white-nationalist leaders during a Crescent City gathering in 2004 headed up by former Klansman and Louisiana state representative David Duke. The protocol eschews violence, demands upstanding behavior, and insists that everyone “maintain a high tone” in their “public presentations.”

A child of the movement, Derek noted that his father has worked for decades to mainstream it. The 2017 riot in Charlottesville, Virginia, where white supremacists staged a massive rally and were confronted by left-wing protesters, proved to be a watershed moment: When President Trump blamed both sides for the violence, Derek said, it was “the first time that I, or any of them who were at that thing, or any white nationalist who wasn’t there, has ever seen anybody hesitate and say, ‘Well, hold on, we need to give these people a fair shake’…. There’s nothing that could have been more encouraging than that.”

Although Derek escaped what might seem like a foreign land to most people, even he is impressed by how much more popular white-nationalist views have become “in this last year and a half, where so much of what I taught people to talk about is mainstream political commentary.”

Indeed, one year into the Trump administration, media coverage and commentary on American racism in its many forms has raised difficult questions. Ever since Charlottesville, numerous press accounts of “the Nazi next door” have elicited outrage. When The New York Times profiled Tony Hovater, a suburban Dayton, Ohio, man with a fondness for Seinfeld, NPR, and fine cooking, last November, readers blasted the paper for normalizing hate. Many argued that providing a platform for white supremacists would only spread their ideas and further their cause. Times national editor Marc Lacey replied: “My outrage is directed at the fact that bigotry is going mainstream, which is what this piece was trying to describe.”

These days, much of the alt-right has gone mainstream, often cloaking its racism in pseudo-social-scientific theory. I first got a taste of this style of debate 10 years ago, when I criticized Bill Cosby in The Washington Post for his national tour emphasizing “personal responsibility,” in which he lambasted black America’s poorest and mass-incarcerated for their bad English, bad dress, and bad behavior. One reader called me out for supposedly hiding black crime rates, writing: “Blacks accounted for 13% of the U.S. population in 2005, but were victims in 15% of all nonfatal violent crimes and nearly half of all homicides.”

“Liberalism will have to deal with race reality sooner or later.” —BadMonkey, a commenter on the white-supremacist website American Renaissance

My essay also garnered attention on Jared Taylor’s American Renaissance website, home to a more refined and learned community of “race realists” and white advocates. While the commenters used more extreme rhetoric than would be allowed in the Post’s pages, there was still a lot of talk about crime statistics and test scores. “Does this writer not understand what a ‘Bell Curve’ distribution is?” asked a commenter called ZorbatheGreek. Another, BadMonkey, wrote prophetically: “Liberalism will have to deal with race reality sooner or later.”

I reached out to Jared Taylor, curious as to whether he thought these ideas had gained more credence in the Trump era. Like Don Black and David Duke, Taylor has been in the trenches a long time, organizing to make America white again. But unlike most in the movement, Taylor is an ideas man, Yale-educated and with the demeanor of a member of the coastal elite. He also promulgates long-discredited theories that race and IQ are the best predictors of human capacity. Taylor considers Charles Murray, co-author of The Bell Curve, “the best-known today of any American academic that writes seriously about racial differences and IQ.” Murray’s renewed popularity on college campuses may be a telling sign.

Taylor thinks there has definitely been growth in the movement lately, but adds that it is “really very hard” to quantify. On the president’s impact, he’s emphatic that Trump has played a “very, very minor role…. Far more important was Trayvon Martin; far more important was what happened in Ferguson” with the shooting death of Michael Brown. Taylor asserts that the media “played up some kind of vicious white racism” but that ordinary people are sick of it. He cites George Zimmerman’s acquittal and the Justice Department ruling that Ferguson police officer Darren Wilson was justified in Brown’s shooting as proof that it was all just “a baloney story.”

Taylor believes that plenty of Americans, even liberals, instinctively share these views but have been stifled by political correctness. Indeed, four days after Zimmerman’s acquittal, the Pew Research Center asked people in a nationwide survey if they were satisfied or dissatisfied with the verdict. The racial divide could not have been starker: 86 percent of blacks surveyed expressed dissatisfaction, compared with 30 percent of whites. When respondents were asked if “race is getting more attention than it deserves” in the Zimmerman case, 60 percent of whites agreed, compared with just 13 percent of blacks.

According to Derek Black, his father targets liberals who believe that blacks and some Latino groups have a crime problem and are less intelligent. “The goal of the movement is to get people who are already against affirmative action and Hispanic immigration, and who are already worried that black communities aren’t policed enough, to be explicit that they think it is about race,” he says.

Shortly after the Zimmerman verdict, my wife Stephanie and our children attended a bar mitzvah for the son of some dear friends down the block. Their kid now goes to the same high school as our daughter—a school that counts among its alumni both the musician Lauryn Hill and the alt-right shock jock Mike Enoch. At the reception, people chatted over cocktails, and another neighbor—whose son is friends with our son—expressed his support for the acquittal, insisting that Zimmerman had killed Martin in self-defense. “I was taken aback,” Stephanie recalls. Our neighbor had “no discernible empathy for Trayvon.”

The near-universal condemnation by average Americans of hate and extremism on the right—for example, in response to the Times article that “normalized” Nazis—obscures more than it reveals. Many American liberals are having similar conversations about race, over things like public safety and policing or the changing demographics of their neighborhoods. Gentrifying parents in Brooklyn move their kids to whiter schools much like school-secessionist parents in Alabama do. In New York, one of America’s bluest cities, a majority of white residents told Quinnipiac pollsters, over the course of several opinion surveys from 2012 to 2013, that they approved of the police department’s stop-and-frisk policy by a margin of more than 2-to-1 over black New Yorkers.

Thus, by focusing their opprobrium on the Nazi next door, white liberals are missing the very real threat posed by a growing white nationalism. These new white supremacists are coming not with tiki torches but with reasoned arguments, buttressed by facts and figures, to make palatable racist ideas that many people, deep down, have always felt were true. And while white liberals have the luxury of deciding whether to maintain a fight against this white-nationalist threat, black people don’t; neither do Mexican Americans, Muslim Americans, or any number of immigrants. The question of “normalizing” hate can only be asked from a position of relative safety and naïveté. As Shane Bauer, a reporter for Mother Jones, tweeted in response to the Times story: “People mad about this article want to believe that Nazis are monsters we cannot relate to. White supremacists are normal ass white people and it’s been that way in America since 1776.”

In Martin Luther King Jr.’s final book—published in 1967, two years after the civil-rights movement had begun to reveal its limits—he proposed that white Americans needed to be more honest with themselves. “To live with the pretense that racism is a doctrine of a very few,” King wrote, “is to disarm us in fighting it frontally as scientifically unsound, morally repugnant and socially destructive. The prescription for the cure rests with the accurate diagnosis of the disease.”