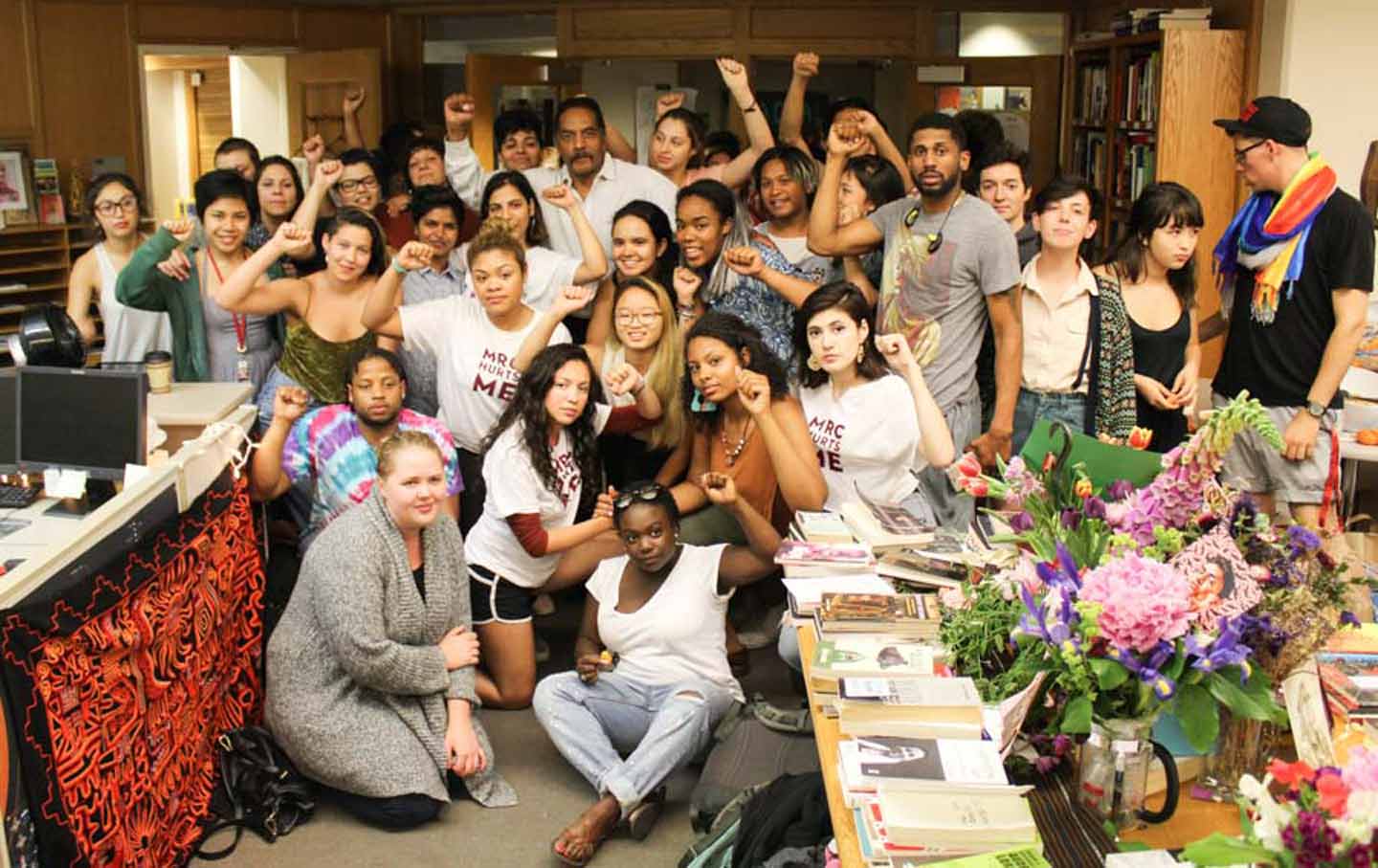 Students from the MRC coalition at Seattle U pose for a photo with Black Panther Aaron Dixon. The students held a 23-day sit-in to demand an overhaul of their college’s curriculum. (The Seattle Globalist / Alia Marsha)

EDITOR’S NOTE: With thanks to the Seattle Globalist, where a version of this article originally appeared.

Last year, when Palca Shibale was a junior at the University of Washington, she started going to meetings of Reclaim UW, a coalition fighting for better treatment of campus employees.

The students in the group fought hard for better wages and benefits for TAs and janitors throughout the school year, even disrupting a meeting of the UW Regents in April 2015 to amplify their demands.

But by the end of the spring quarter, they were burned out. And when classes began the following fall, Reclaim UW had lost much of its member participation.

This is exactly what Shibale said she does not want to see happen to Decolonize UW, a new activist group on campus that formed this past year around a six-hour student walkout to press the administration to address systemic racism on campus.

“Sometimes there are gaps within activism and if you don’t have something that’s sustainable, it can die very quickly.”

So when Shibale graduated in June, she wanted to make sure there was a plan to keep the momentum going with Decolonize UW.

“What happens when we graduate and haven’t left anybody behind? People come up and they have to start from ground zero. It keeps the movement [stagnant],” Shibale said. “Sometimes there are gaps within activism and if you don’t have something that’s sustainable, it can die very quickly.”

Student organizing has high turnover by nature. Students typically stay for four years—sometimes only two when they transfer from a community college—and then they graduate. Fewer students are on campus during summer quarters, which can create a lull in student activism.

Theresa Earenfight, director of the Medieval Studies Program and a history professor at Seattle University, says she believes this is what administrators at her university are counting on—that the summer will provide relief from the pressure placed on them by the MRC Student Coalition. That’s the group of students who occupied the Matteo Ricci College administrative office for three weeks this spring demanding a radical change to the curriculum of the humanities department.

“They count on short memories and a summer of sunshine to make the sit-in fade,” Earenfight wrote in an e-mail.

On June 2, the 22nd day of the sit-in in the Matteo Ricci College office, Interim Provost Bob Dullea announced that one of the MRC Student Coalition main demands would be met: Dean Jodi Kelly was put on administrative leave. The following day the coalition announced that it was ending the sit-in, and had formed a review committee to critically analyze and reimagine the college’s curriculum in cooperation with the administration.

Last week, SU graduated thousands of its seniors, including about a third of the members of the MRC Student Coalition. But this is unlikely to be the end of the movement.

“The thing I learned in the 18 years teaching at SU is this: The SU alums are powerful and do not stop raising a ruckus just because they’ve graduated,” wrote Earenfight.

Earenfight and Vic Vong, now a sophomore in the College of Arts and Sciences who was involved in the sit-in, agreed that it was a tactic by the SU administration to stretch the sit-in until almost the end of spring quarter, in hopes that energy would dissipate over the summer.

“These people are the same ones who think that there is a ‘right time or forum’ for talking about racism,” wrote Vong in an e-mail. “They think they can time us out just like they don’t pay attention to us unless we physically exist where we’re not supposed to. They think our lives aren’t political every day, as though that were an option,”

Vong says she does not know if MRC Student Coalition will hold meetings over the summer, but that they’ll be back with other forms of resistance again in the fall.

The sit-in at Seattle U may have grabbed the headlines, but across town students at Seattle Pacific University, also made a push for a more equitable university culture.

SPU Justice Coalition was a marriage of two separate movements of graduate and undergraduate students following a campus forum on race in January.

The coalition’s centerpiece is a petition it released on February 9 that focuses on hiring diverse and culturally competent faculty and staff. The petition has amassed almost 1,000 signatures to date.

For Kim-Hawkins, Ariän Taher, and Kelsey Lacanilao, the main fuel that drives the SPU Justice Coalition to foster what they call a “culture of resistance” at SPU is the sense of community they have found. They believe this will contribute to the continuity of the coalition.

“We are extremely tired and burned out. But this is also, for a lot of us, the first time that we’ve met the same air that we breathe. We’re able to find the space that we can come together and be like, ‘These are my own,’” said Kim-Hawkins.

Like their counterparts as SU and UW, the SPU coalition is also in transition as summer begins and members graduate. During the summer, the coalition is seeking new, younger activists to supplement its current group of about two dozen core members.

“Our group is painfully, tragically unique. How do you replicate that?” said Taher, who graduated in May.

Back at UW, Shibale says both she and another core member of Decolonize UW who just graduated are moving out of Washington State this summer. But she is confident the group’s work will continue.

Its model is such that the current core members are not the only ones doing the work: The group acts as the “central plug-in” that connects student activists in different departments, who can push their respective department administrations for change.

Decolonize UW has also established different committees based on its list of seven demands including UW’s divestment from private prison companies, and official recognition of the indigenous land that it is built on.

She said this model helps to keep student movements going even after seniors graduate, so summer of sunshine can’t erase progress made during the school year.

For administrators this means that there’s no longer any excuse to not follow up on students” demands the next year.

Current undergraduate and graduate students, alumni, staff, faculty, and community members are all watching and fighting to make sure they follow up on commitments to make their campuses places where historically marginalized groups can thrive.

“It takes a village to raise a movement,” said Taher.