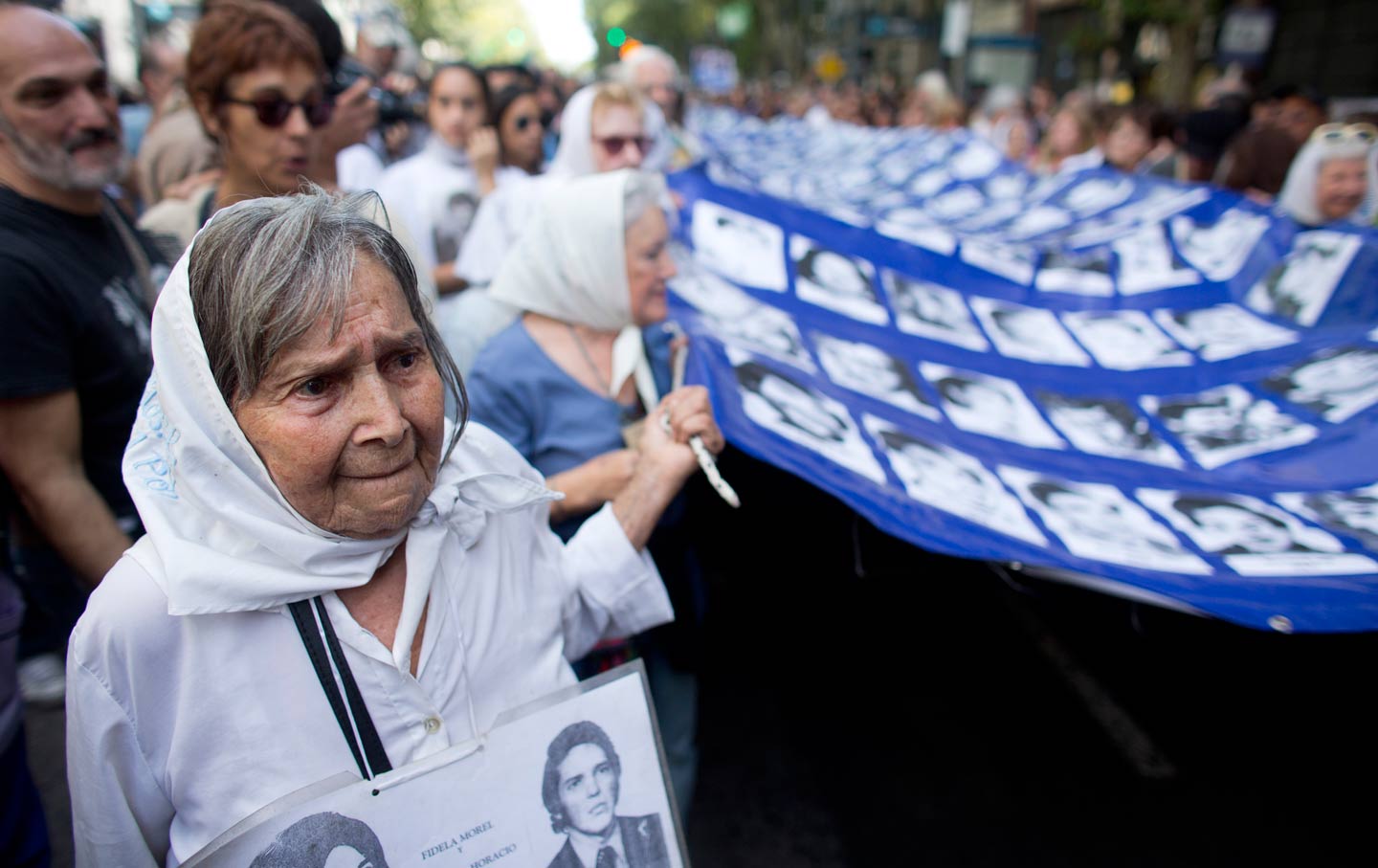 On March 11, a group of prominent Argentine human-rights activists presented a poignant petition to the US Embassy in Buenos Aires. They asked for the cooperation of the US government to advance the “process of memory, truth and justice relating to the crimes against humanity committed in our country” during the military dictatorship that left over 20,000 desaparecidos—citizens detained by state security agents and murdered, but never found. They requested that President Obama use his authority to declassify still-secret US government archives “that would reveal the fate and truth of our disappeared,” as well as the babies born to secretly detained—and subsequently executed—pregnant women, who were then given to military officers for adoption.

On March 14, US National Security Adviser Susan Rice publicly stated that Obama will “announce a comprehensive effort to declassify additional documents, including for the first time military and intelligence records,” when he travels to Argentina on March 23.

While much media attention has focused on Obama’s historic trip to Cuba, his visit to Argentina falls on the 40th anniversary of the March 24, 1976, military coup. For weeks, White House officials have considered how Obama could pay appropriate homage to that painful date in Argentine history and use the power of the presidency to make a meaningful gesture, as Rice stated, “to underscore our shared commitment to human rights.” A special declassification project of still-secret CIA, Defense Department, and FBI records not only would reveal concrete evidence regarding unresolved atrocities in Argentina, but also offer a long-overdue acknowledgment of US support for the ensuing repression in the months following the military takeover. “This anniversary and beyond,” Rice said, “we’re determined to do our part as Argentina continues to heal and move forward as one nation.”

“I do want to encourage [the dictators]. I don’t want to give the sense that they’re harassed by the United States.” —Henry Kissinger

What the US government knew, and what actions it took at the time of the coup, remain hidden in those still-classified operational intelligence files. But the policy of support for the military takeover that Secretary of State Henry Kissinger immediately adopted has emerged from records obtained through the Freedom of Information Act and archival research. Only two days after the coup, according to declassified State Department minutes of Kissinger’s staff meetings, his Latin American specialists warned him “to expect a fair amount of repression, probably a good deal of blood, in Argentina.” Kissinger, however, issued these instructions on US policy toward the new military junta: “Whatever chance they have, they will need a little encouragement…because I do want to encourage them. I don’t want to give the sense that they’re harassed by the United States.”

The secretary of state personally transmitted that message. According to a secret memorandum of conversation (obtained under the FOIA by our organization, the National Security Archive) some ten weeks after the coup, Kissinger met with Argentina’s new foreign minister, Adm. César Guzzetti, in Santiago, Chile. When Guzzetti alerted Kissinger that the military was moving aggressively against “the terrorists,” Kissinger responded, “If there are things that have to be done, you should do them quickly.” Even after his Assistant Secretary for Inter-American Affairs, Harry Shlaudeman, informed Kissinger that the military junta had decided to adopt “the Chilean method…to terrorize the opposition—even killing priests and nuns and others,” Kissinger reiterated this message to Guzzetti in yet another meeting in New York in October 1976. “Look, our basic attitude is that we would like you to succeed,” Kissinger told the junta’s foreign minister. “I have an old-fashioned view that friends ought to be supported. What is not understood in the United States is that you have a civil war. We read about human rights problems but not the context. The quicker you succeed the better.” The US ambassador to Buenos Aires, Robert Hill, subsequently reported that Guzzetti returned from this meeting believing that Kissinger “gave the green light” for the generals to pursue their repression.

Over the next seven years, that repression cost the lives of thousands of citizens, and the torture of thousands more. Argentine security forces created a network of secret detention-interrogation-torture-execution camps, and then disappeared victims by dumping their bodies from helicopters into the ocean. Argentina also became a central country in Operation Condor—the clandestine, cross-border collaboration of Southern Cone military regimes, led by Augusto Pinochet’s Chile, to track down and eliminate militant and civilian critics around the world.

The operational files, intelligence reports, and cable traffic of the CIA, the Defense Intelligence Agency, and the FBI contain detailed evidence on the state-sponsored terrorism that took place in Argentina. Yet 40 years after many of these documents were written, they remain classified—beyond the reach of human rights activists, victims’ families, and legal authorities seeking to hold military officials accountable for their crimes. During the last year of the Clinton administration, Secretary of State Madeleine Albright did authorize a special declassification of 4,700 revealing State Department documents; one of them, a confidential 1982 memorandum of conversation between Assistant Secretary of State Elliott Abrams and an Argentine diplomat, addressed the issue of the disappeared grandchildren and became a key piece of evidence in a trial that convicted high-ranking Argentine military officers of kidnapping. But even more revelatory records in the SCIFS—Sensitive Compartmentalized Information Facilities—of the CIA and US military remain secret to this day.

In a gesture of declassified diplomacy to the Argentine human rights community and the victims of atrocities, President Obama will order those documents reviewed for release as he commemorates the fortieth anniversary of the coup on March 24 by visiting the Parque de Memoria in Buenos Aires. The multi-agency process of centralizing, evaluating, redacting, and declassifying hundreds of such records is likely to take until the end of his tenure in office. Moreover, if previous special declassifications involving the intelligence community are any indication, the “securocrats” in the CIA will resist the president’s directive and attempt to withhold valuable, if self-incriminating, records from release.

Yet the fact that the president of the United States is ready to open the Pandora’s box of secrets on Argentina and assist the pursuit of truth and justice reflects his commitment to redress the past by making it accessible. His decision to declassify will not only reveal history, it will make history—for the human rights movement in Argentina, and around the world.