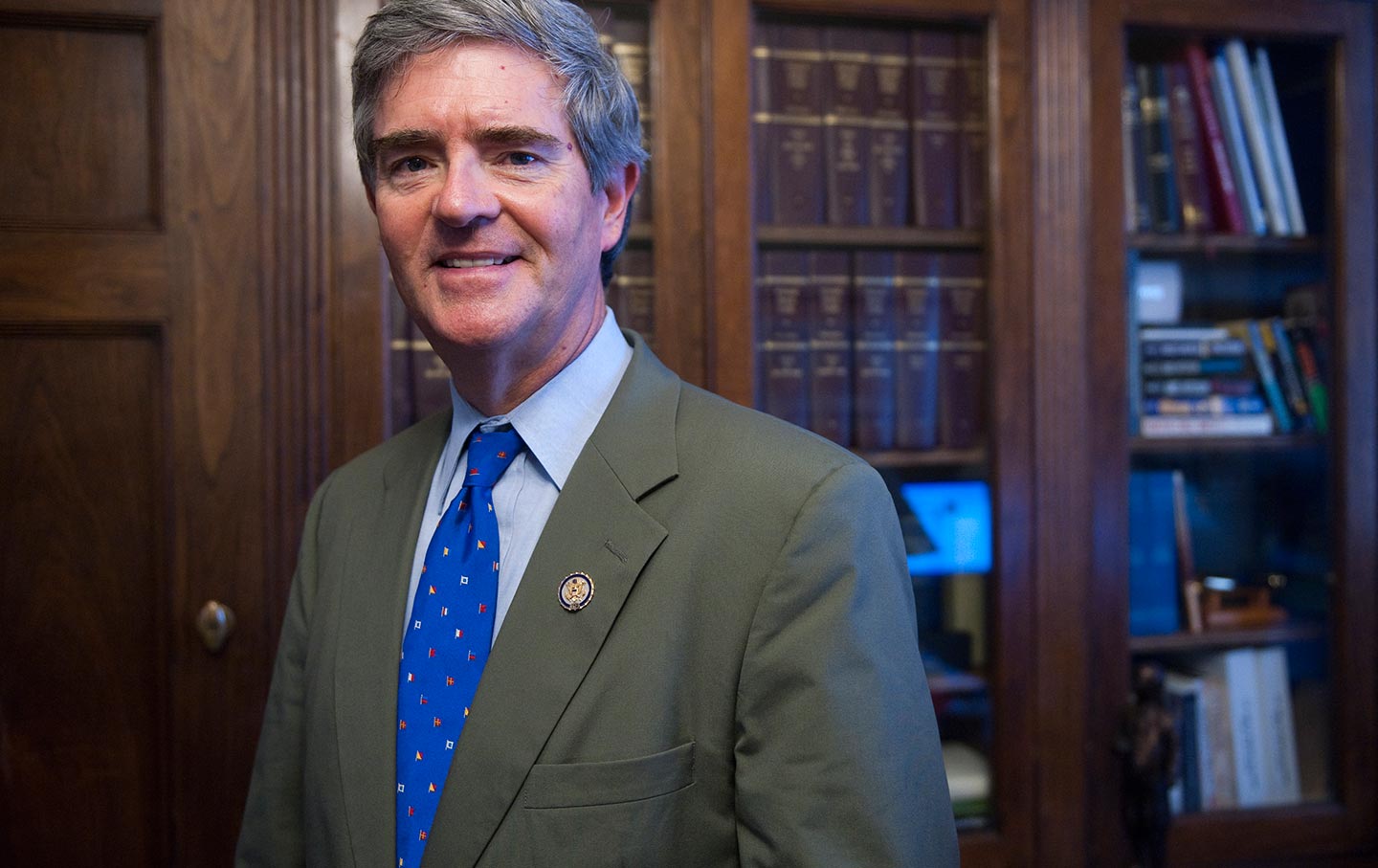 Former congressman Brad Miller has filed a lawsuit against Ocwen, one of the nation’s largest mortgage-servicing companies. (CQ Roll Call via AP Images)

Brad Miller’s been tracking his particular white whale for over a decade. But he hadn’t found the right harpoon with which to slay it. Until last week.

Miller is a former congressman from North Carolina, who co-authored the legislation creating the Consumer Financial Protection Bureau. Since leaving Congress, he’s been working on litigation to finally bring to justice the mortgage companies that damaged millions of lives during the foreclosure crisis. And last week, he filed an innovative lawsuit against Ocwen, one of the nation’s largest mortgage-servicing companies. (A servicer operates as an accounts-receivable department for home loans. This is the company you make your check out to.)

We know about Ocwen from a series of state and federal enforcement actions. It has paid billions in fines for repeated, routine violations of consumer financial laws. Its computer system “lacks the basic system architecture and design necessary to properly service loans,” which is a bad look for a company that primarily services loans. This led to inaccurate monthly statements, an inability to correct simple errors, and illegal foreclosures over payments short as little as a few cents.

To Ocwen, the fines were minimal enough to be a cost of doing business. The company was threatened with expulsion from multiple states but reached settlements that enabled it to keep its business license. And, as we’ve learned over the past decade, it’s very, very difficult for any homeowner to fight one of these mortgage behemoths in court.

But there’s another side of the equation. Ocwen doesn’t own the loans it services; investors in mortgage-backed securities do. During the housing bubble, investment banks bundled thousands of mortgages together and created bonds that were sold all over the world to sovereign-wealth funds and pension funds and institutional investors. Servicers were then hired to handle day-to-day operations. Whenever a homeowner was pushed into an unnecessary foreclosure, that hurt investors as well, because they paid all legal costs and the value of the foreclosed home dropped. Servicers actually got paid in full, so they had incentives to foreclose. But investors got as abused as the families being put out on the street, losing most of their investments.

Unfortunately, there was little they could do about this. “The governing documents say that as a matter of contract law, the investors can’t sue,” said Miller. Instead, they had to rely on a trustee, which had legal custody of the mortgages, to represent their interests. The trustees hired the servicers and were supposed to monitor them. Investors were the beneficial owners of these mortgages, but the trustees were the legal owners. Technically, the investors could sue if enough of them banded together to hold 25 percent of the value of the bonds, but no investor knew who the others were, and no lists of investors were ever created or disseminated. So it was up to the trustee to be the representative if the servicer did anything shady.

Who were these trustees? Usually large banks, like Wells Fargo, or Deutsche Bank, or Bank of New York Mellon. In several cases, trustees owned servicers in another line of their business. They were never going to mess up the very good gig of standing mute as servicers made off with investor money. How else would they ever get another opportunity to be a trustee?

Investors sought a way out of this box. A few sued trustees, but those cases haven’t been going very well. But Miller figured out a solution for a subset of investors: He helped craft a lawsuit filed last week on behalf of the United Food and Commercial Workers Midwest Pension Fund.

UFCW Midwest bought mortgage-backed securities through its pension plan, which is subject to a law called the Employee Retirement Income Security Act (ERISA). It gets a little technical, but because UFCW is the beneficial owner of the mortgages, the mortgages were assets of the pension plan. And under ERISA, anyone exercising control over plan assets—like the servicer of the mortgages—is a fiduciary to the plan. The lawsuit cites a 1996 opinion from the Department of Labor, which oversees ERISA, confirming this.

What does that mean? Simply put, it means that the servicer is required by law to operate in the best interests of the plan. Obviously, Ocwen did not operate in the best interest of investors, instead engaging in self-enrichment at investor expense. So the lawsuit says that Ocwen violated its fiduciary role, and caused losses for the pension plan. “Plaintiffs seek to recover losses from Ocwen’s breach of fiduciary duties, to disgorge Ocwen’s profits from prohibited self-dealing, and to disgorge the profits from other defendants that knowingly participated in these prohibited transactions,” the lawsuit states.

The UFCW Midwest pension has about $1 million in mortgage securities at issue in this case. But they are the tip of the iceberg. Miller estimates that between 10 to 20 percent of all mortgage-backed securities were purchased by pension plans, as they were pitched as a rock-solid investment. In addition, pension plans bought funds through big asset-management companies like BlackRock and Pimco that contained mortgage-backed securities. The total amount of plans eligible for litigation like this could reach hundreds of billions of dollars.

In a statement to The Nation, Ocwen spokesperson John Lovallo said, “Ocwen is reviewing this matter, and intends to defend itself vigorously.”

Why is it important to cheer one set of investors fighting another set of wealthy companies? First of all, you’re talking about theft from the pension plans of grocery clerks, firefighters, teachers, and police officers. Previously, they were unable to do anything about it. So this lawsuit, if successful, will provide a way for pension funds to reestablish their legal rights.

But it’s bigger than that. In mortgage securitization, investors and homeowners were actually aligned. A foreclosed house isn’t as valuable as one where homeowners are making payments, even reduced payments. Fixing mortgage securitization by giving some investors the right to sue will make it less likely for companies like Ocwen to push unnecessary foreclosures. “If you reform the system to benefit investors, it also benefits debtors,” said Miller. “People on either side of the intermediation are getting screwed.” At a time when the Trump administration is busily deregulating financial markets and even some Democrats in the Senate are helping them, new protections for mortgage borrowers are sorely needed.

Plus, securitization isn’t only used in mortgages: Auto loans, student loans, and a host of other products are sliced and diced and sold to get investor capital involved. As Miller explains, there aren’t enough bank assets to meet the demand for loans; inevitably, the most credit-risky get left out. Investors won’t touch these securities if they think their rights won’t be protected. “Bringing accountablity to entire securitization model would be ideal,” he said. “It has the potential to reform servicing of securitized assets, which has been an enormous problem, with a financial model that we need to make work.”

Nobody has really connected the rights of investors and borrowers in this fashion; each side sat in their silos without working together. Ocwen will clearly fight this lawsuit hard. But if successful, it could bring together different parties to finally hold the real bad actors in the financial system accountable.

For Miller, this is the culmination of years of work. He fought in Congress to rein in predatory lending. He proposed steps to mitigate foreclosures through aggressive government action. He demanded arrests for fraud and misconduct. On all of this he was unsuccessful. But this lawsuit offers an opportunity, in a small way, to get his revenge. As he told me, referencing the Mandy Pantinkin character in The Princess Bride, “There is an Inigo Montoya quality to this, I admit.”