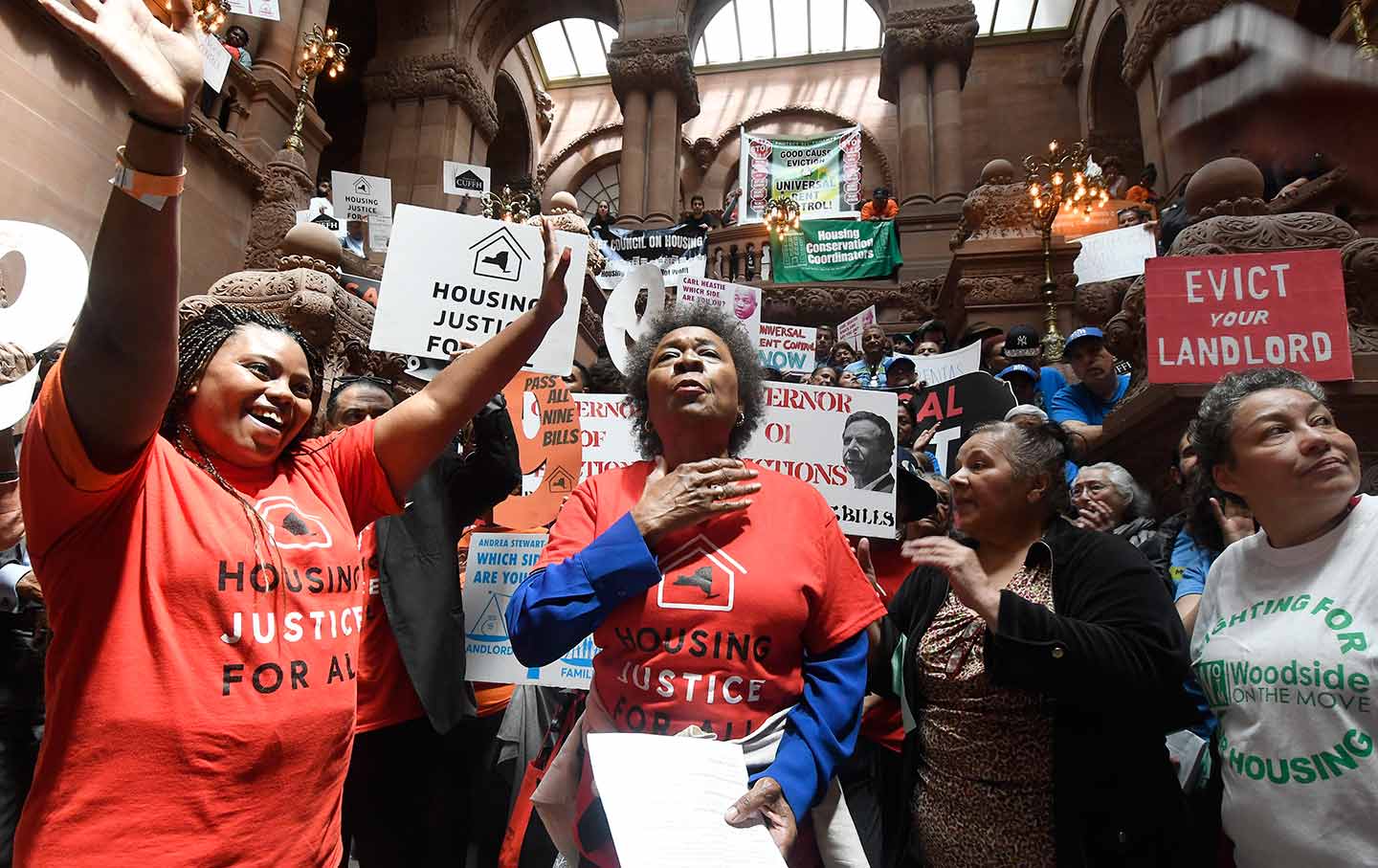 National policy proposals for fighting poverty are not usually drafted by the people who most urgently need them. At best, poor and working-class people may be brought in to a forum or legislative hearing to testify in support of a policy when it’s nearly fully baked, and has already been delivered by elites.

In September, People’s Action, a national network of state and local grassroots power-building organizations, launched a “Homes Guarantee” campaign that it hopes will dramatically change housing policy and the national conversation about it. It calls for major reforms at the federal, state, and local levels—including everything from the construction of millions of units of social housing to national rent control—and is taking aim at the platforms of both presidential and down-ballot candidates. What’s also notable is the way the policy proposal was generated: by a group of directly impacted people from across the country.

This group, whom People’s Action have deemed their “grassroots leaders,” includes people who have experienced homelessness, live in public housing, rent from corporate landlords, or own mobile homes. In a series of discussions, they determined priorities that were then shaped into a policy proposal—with their consultation. Now, the same people are helping to lead the effort to garner support among policy-makers and voters. It’s an approach to policy-making that centers and responds to people’s lived experiences, one rarely used when it comes to antipoverty policy (with some notable exceptions).

Grassroots leader Linda Armitage, age 77, previously faced eviction when her NGO-owned building for seniors was almost sold to a for-profit developer. She says being able to talk about one’s personal connection to a proposal makes all the difference between policy’s being “impersonal” and its being about “humanity.” 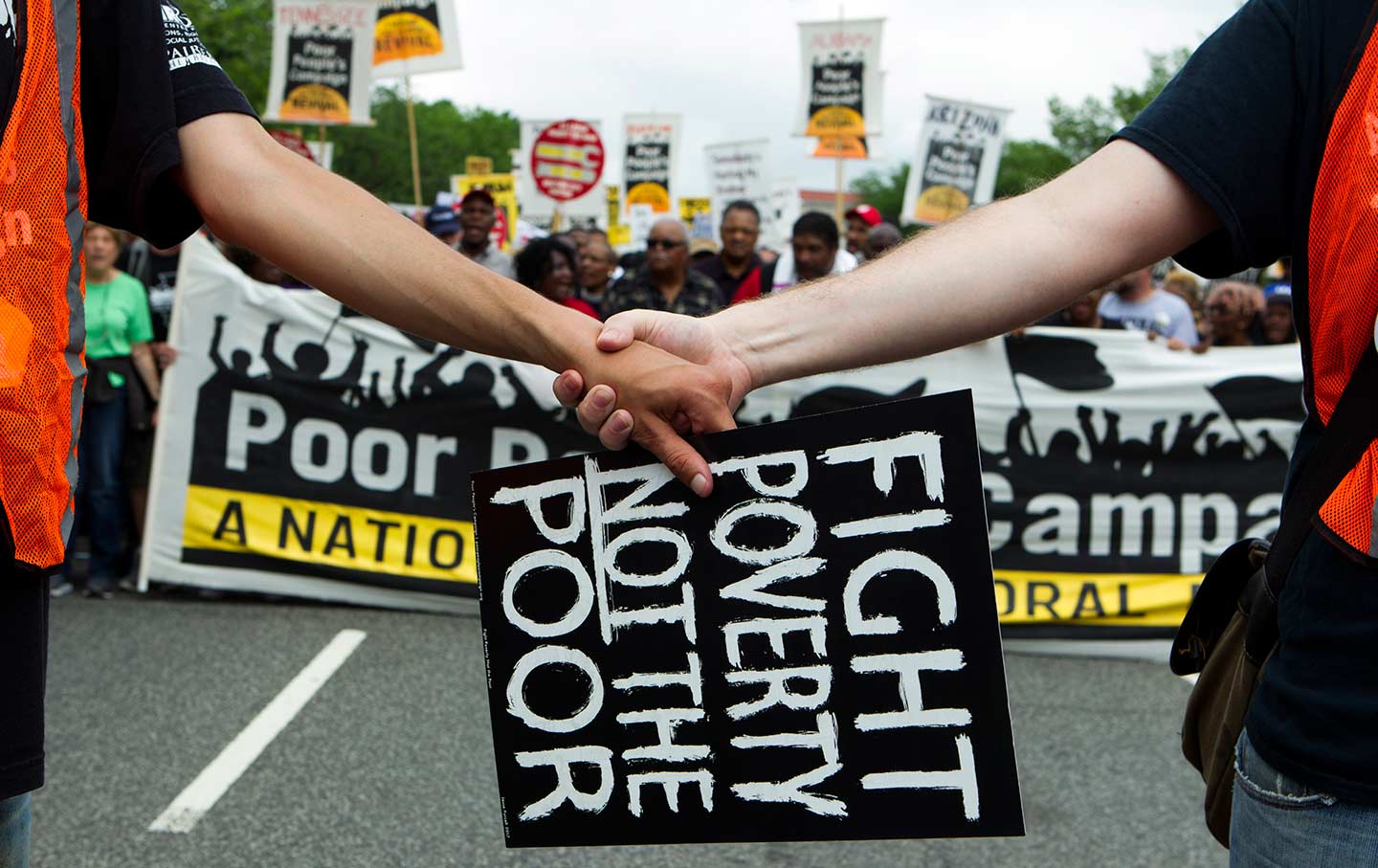 Ending Poverty Will Require a Movement Led by Poor People

Armitage had the opportunity to present the Homes Guarantee to lawmakers on the Hill in April. “It’s interesting to see people’s faces when listening to real stories from real people,” she says. “It’s like, ‘This goes on in this country?’ A think tank can come up with wonderful things, but if it’s not backed up by real people’s experiences… That’s what we were trying to communicate to the representatives.”

The need for a dramatic shift in housing policy is clear: There are 43 million renter households in the United States—nearly half of whom spend more than 30 percent of their income on rent. Approximately 3 million people experience homelessness every year. There is no county in the nation where a full-time worker earning the minimum wage can afford a two-bedroom apartment. And the wealth of the average black American is just 10 cents on the dollar compared to the wealth of the average white American—in part because public and private-sector policies have promoted white homeownership, while excluding people of color and extracting wealth from their communities.

People’s Action’s Homes Guarantee proposes building 12 million units of social housing—a number meant to cover all US renter households spending more than 50 percent of their income on housing—as well as national rent control, a tenant bill of rights, reinvestment in public housing, the construction of 600,000 units of Permanent Supportive Housing with wraparound services for chronically homeless people, and reparations for those who have been affected by the United States’ long history of racist housing policies. (Variations on these policies have been pursued by tenant rights organizations across the nation, proponents of the anti-homelessness policy Housing First, and other housing advocates.)

“The idea is very simple,” says Tara Raghuveer, housing campaign director at People’s Action and founder of KC Tenants and the Kansas City Eviction Project. “We live in the richest country in history, and we can and must guarantee that everyone has a home.”

The organization arrived at this vision last July, when 10 People’s Action organizers met with about 40 grassroots leaders to devise a new national campaign. (All were leaders in local housing committees within People’s Action member groups.) They are racially diverse and traveled to the meeting in upstate New York from Washington state, California, Wisconsin, Ohio, New York, Illinois, and Nevada.

Among the stories they shared with one another were their struggles in a housing market rampant with discrimination, or with corrupt landlords and indifferent management companies. They also talked about the tenant rights organizing now happening across the country. After these discussions, the People’s Action organizers put forward several campaign proposals that focused on single aspects of the housing problem—campaigns that seemed winnable, such as a ban on developer contributions in elections, or organizing public housing residents and registering them to vote. But the grassroots leaders staged what Raghuveer happily calls “a coup.”

“It started to dawn on everybody,” says Armitage. “‘How can we choose a campaign just on rent control, or reparations, or homelessness? This isn’t really going to solve the problems. Why not be radical and pushy and everything else? Why not guarantee a home for everybody?’”

They began to outline their policy priorities, and in April 2019, grassroots leaders and organizers briefed members of the Congressional Progressive Caucus and staff members. They both presented their ideas and told their stories: of living in public housing with mold, undrinkable water, and broken elevators; private landlords who evicted tenants after they complained of safety violations; the search for affordable and accessible housing as a person with disabilities; being homeless and in shelters, separated from family.

Members of the caucus seemed to be on board, but, according to Raghuveer, there was just one problem: “We were like, shit, we don’t actually have a proposal written.” She says People’s Action then reached out to a group of policy experts “who understood that they were working in service of a grassroots vision, not vice versa.” Those experts spent the summer drafting and redrafting a proposal, collaborating with the grassroots leaders at every step.

These leaders were able to draw on their own experiences to help shape the policies. Armitage says she has found for-profit management in senior public housing to be “incompetent, condescending, and mean”—focused solely on rent collection and “making sure the building doesn’t fall down.” In part because of her input, Homes Guarantee proposes to end for-profit management of public housing and allow tenant associations in privately owned buildings the right to a cooperative management structure.

Another grassroots leader, David Zoltan, was involved in making sure the proposal would include affordable housing for people with disabilities. Zoltan, who has also experienced homelessness, lost his left leg below the knee because of an injury from a manual labor job in 2016; he says that, after the accident, it took a year of searching to find an accessible home. When he finally found one, monthly rent was $1,050, consuming his monthly disability check of $950. He notes that less than 1 percent of all apartments in Chicago, where he lives, are both accessible and affordable.

In Homes Guarantee, new social housing units would have to meet accessibility specifications, such as doors that are wide enough to enter in a wheelchair, or rooms with sufficient space to turn—as Zoltan puts it, “things that can’t easily be altered after construction.” Homes Guarantee also stipulates that landlords would be required to meet a tenant’s changing accessibility needs, such as by installing grab bars or a tub that is wheelchair-accessible if it became necessary. “If this becomes the standard, we will start to chip away at how little accessibility there is in the housing market,” says Zoltan.

When the proposal was released on September 5, it quickly found champions on the Hill. In conjunction with the Center for Popular Democracy (CPD), People’s Action is now working with six progressive legislators—Representatives Alexandria Ocasio-Cortez, Ilhan Omar, Ayanna Pressley, Rashida Tlaib, Chuy García, and Pramila Jayapal—on a package of bills enacting many of the Homes Guarantee policies. Raghuveer expects that the package will be introduced soon, and says People’s Action and CPD “will make sure this is understood to be the people’s housing agenda—the new standard for progressive housing policy.

It may have already had an impact on at least one presidential campaign: in September, Bernie Sanders—who previously held a meeting with People’s Action about their proposal—announced that his own Housing for All plan would include many of the same priorities, such as funding for more than 9 million social and affordable housing units, $70 billion to repair public housing stock, and national rent control. Grassroots leaders with the Homes Guarantee campaign said that they were disappointed when Elizabeth Warren would not commit to backing Homes Guarantee explicitly at an Iowa presidential forum that same month. (Sources close to Warren’s campaign said she will be coming out with a revised housing proposal.)

Of course, the big question—as is always the case with bold progressive proposals—will be: How much would this cost, and what would it do to the economy? Mark Paul, an assistant professor at New College of Florida and a fellow with the Roosevelt Institute (where I am a journalist in residence), is on the Homes Guarantee policy team. He was charged with helping to ensure that the proposal is economically sound.

Paul says the biggest obstacle to implementation of these policies is “the current obsession with ‘pay-fors’ across the political spectrum”—the idea that any new spending must be offset by equal spending cuts or new revenues. He also notes that when private markets fail to fulfill the public’s basic needs, the stakes are literally life or death. In these cases, the government should intervene to establish a floor—a public option that directly competes with the private sector to provide essential goods and services—and better regulate private actors.

“We need to think much more seriously about the role of the federal government in ensuring that everybody has basic needs met,” says Paul. “It’s a policy choice to allow things like poverty, unemployment, and homelessness to be persistent features of our society, and we can choose otherwise.”

Everyone involved in the Homes Guarantee knows that some elements are more immediately attainable than others. Rent control, for example, wouldn’t require any public spending, and there have already been key wins this year in New York and California—both of which were powered by grassroots tenant organizations. But what has already transpired for this proposal is significant: A vision was created by directly impacted people, and a policy community is working in support of that vision. “We are reimagining housing,” says Armitage. “‘Housing as a human right’—it’s a wonderful value, but by golly, we’ve got to put some teeth in it.”