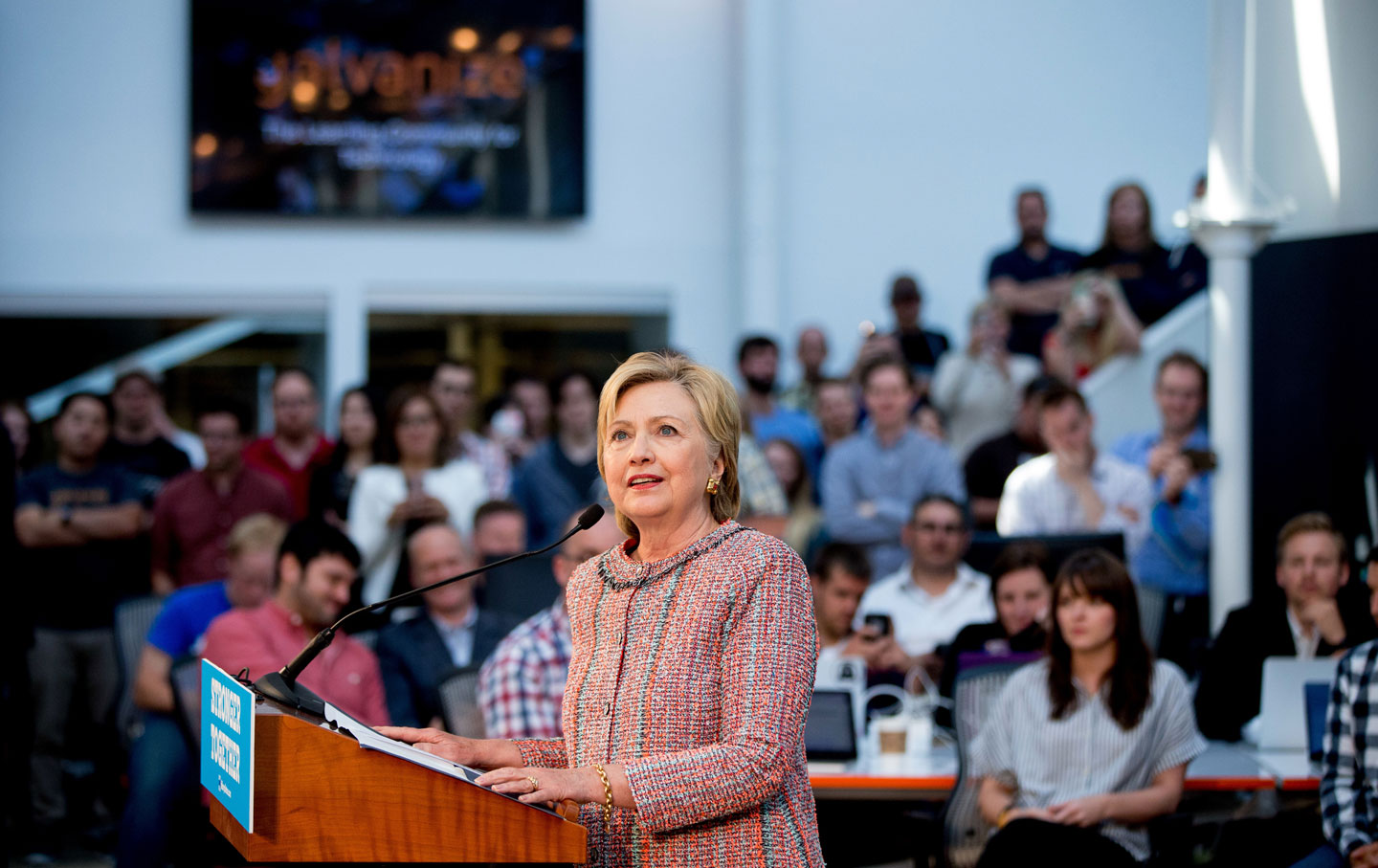 Last week, Hillary Clinton’s presidential campaign released a lengthy policy paper outlining her “tech and innovation agenda.” While her extensive use of a private e-mail server to conduct government business while she was secretary of state is certainly important, raising serious questions about her understanding of communications protocols as well as her commitment to open government, there’s more to tech than just expecting a politician to know how to use e-mail securely. Given how much the fast-growing technology sector affects our lives—disrupting established ways of working, altering how we get our news and socialize, and redistributing wealth (mostly into the hands of a bunch of upstart moguls and venture capitalists)—it’s good that the Clinton campaign has offered a comprehensive statement on her thinking.

To my eyes, two things were most notable. First, the paper marks a revival of Clinton’s vocal support for “Internet Freedom”—a foreign policy plank that she championed in her first years as secretary of state, but stopped talking about back in 2010 after WikiLeaks took the concept of free speech a bit too seriously for the Obama administration’s taste and leaked a trove of State Department internal documents. Clinton’s declaration that she will oppose Internet shutdowns by foreign governments as well as the efforts of countries like China or Russia to balkanize the global network, while supporting the “multi-stakeholder” approach that has kept the Internet mostly free, is certainly welcome.

Second, Clinton’s declared agenda represents an almost seamless continuation of Obama’s current policies. Obama has constantly hyped his commitments to expand computer science and STEM education; so does Clinton. Cognizant of the growing digital divide, he’s promised to get affordable high-speed broadband to all Americans; so does Clinton. He champions America’s high-tech industries in their efforts to sell their products overseas and to protect their intellectual property; so does Clinton. He claims to balance support for individual privacy and security with ongoing reliance on America’s vast cyber-spying capabilities; she mouths the same contradictory platitudes. And, having been burned by the near meltdown of Healthcare.gov, he now is making real investments in modernizing government information technology; she’s endorsed those programs as well.

Where Obama has been largely silent is on the question of how to protect workers in the growing so-called “sharing economy.” Clinton also treads carefully, calling for a “high-level working group” to figure out how to make job benefits more portable.

If Clinton’s tech agenda seems a bit tame, that’s because it reflects the current balance of forces dominating US tech-policy debates. It’s easy to be for expanded computer-science education. Everybody, from parents desperate to give their kids a shot at a better future to tech companies searching for more skilled coders (and happy to have taxpayers pay for their training), loves that idea. But to actually bring high-speed Internet service to every American, or to lift up workers being exploited by the Ubers of the world, requires taking on very powerful corporate actors.

Affordable, high-speed broadband isn’t happening because most of the market has been carved up by Comcast, Verizon, and AT&T and consumers rarely have a choice of more than one provider for overpriced and underperforming Internet service. On this central issue, Clinton offers weak tea. Without taking on the cable monopolies, it’s extremely doubtful that all Americans can be provided with access to affordable broadband by 2020, as she promises. Backing net neutrality and municipal broadband options won’t get us there either. Likewise, Clinton’s words about protecting consumer privacy as Americans grow more sensitive to the perils of data-driven discrimination should not reassure anyone; promising “effective regulatory enforcement…without stifling innovation” means little.

But more than a little of blame for the weaknesses in Clinton’s tech agenda should be laid at the feet of her erstwhile primary opponent Bernie Sanders. Scour the Vermont senator’s speeches and policy statements and you will find little on tech and innovation, beyond a few slams of media conglomerates and support for net neutrality. For all his socialist stylings, Sanders never articulated a vision of technology serving the public good, what’s coming to be known as “civic tech.”

For example, he never mentioned a bill he cosponsored after 9-11, to create a nationwide 2-1-1 phone service facilitating the creation of a single repository of comprehensive data on all community services. (Perhaps because he didn’t want to give Clinton credit for being the bill’s original sponsor?) Nor did he try to engage the serious issues raised by the Uberization of jobs, beyond one interview last summer with Bloomberg News saying he thought the giant ride-hailing start-up should be regulated. The concept of “platform cooperatives”—like a taxi-hailing app owned by the drivers—appears nowhere in his thinking, despite his support for local coops when he was mayor of Burlington.

To be sure, Sanders harped constantly on the need to rebuild America’s crumbling “infrastructure” in his speeches, but rarely if ever included public broadband in his litany of priorities—despite the fact that Internet access is now central to anyone applying for a job. When Brewster Kahle, the founder of the Internet Archive, one of the few pieces of online public infrastructure that we have, was stymied by government regulators in his effort to create an online credit union focused on helping the poor, Sanders was nowhere to be found.

Thus, for all the useful pressure his campaign put on Clinton to shift to the left, an opportunity to develop a more substantive progressive tech agenda in 2016 was squandered. Yes, a lot of idealistic coders built a lot of useful organizing technology to assist the Sanders campaign, but they had no influence on his tech policies. Nor, as best as I can tell, did they try to exert any.

The big questions about how tech is changing our lives and society won’t go away. In the past two decades, we have seen new modes of commerce and communication upend many established industries and cultural norms. Even if our reigning political leaders fail to keep up with these trends, the unintended consequences of fast-paced technological innovation will undoubtedly force their way onto the national agenda. After all, it wasn’t long ago that Clinton herself probably thought that she didn’t have to pay attention to the implications of running her government e-mails through a private server in her basement; now she surely knows better.