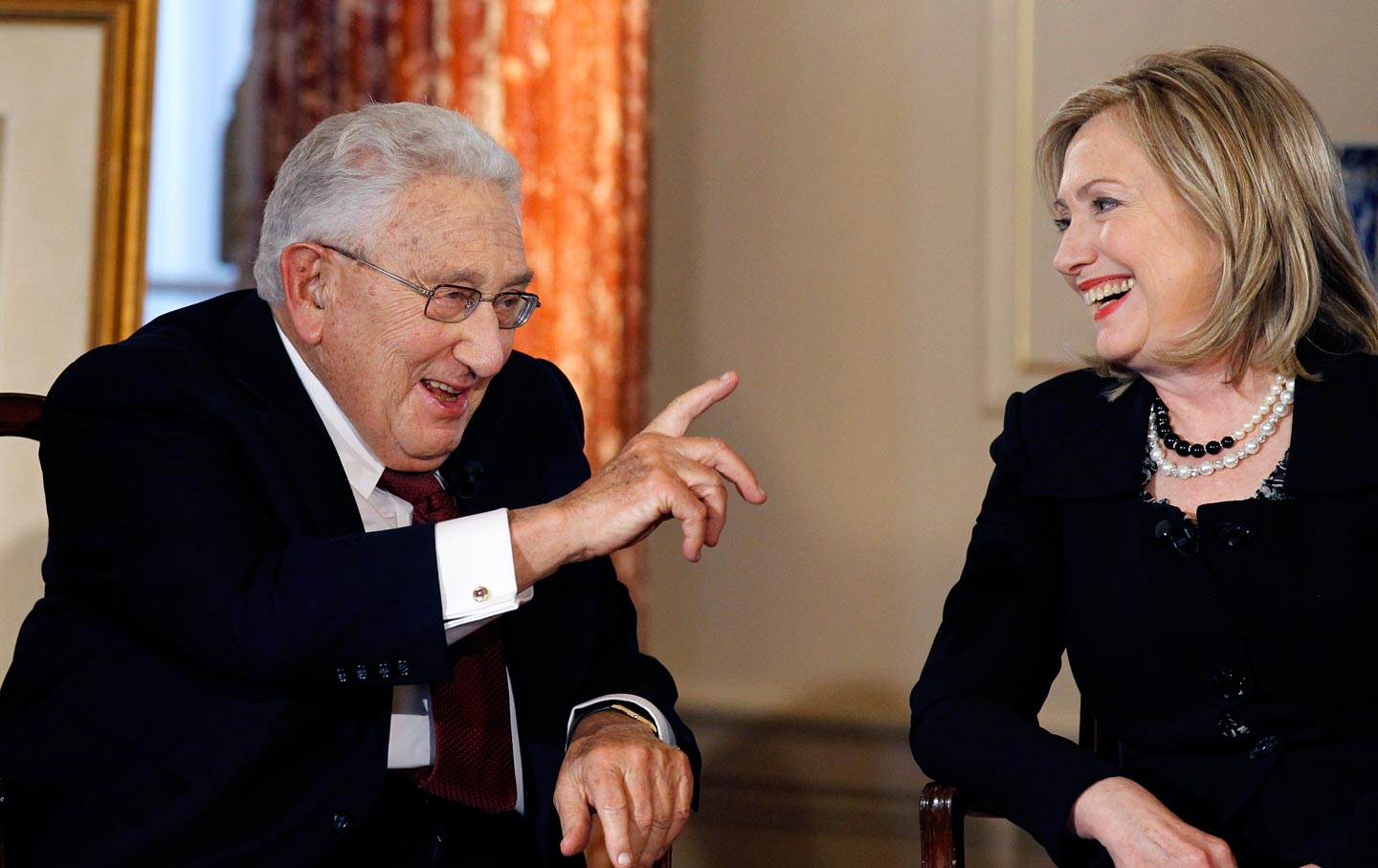 Word comes from Politico that Hillary Clinton is courting the endorsement of Henry Kissinger. No surprise. Kissinger and the Clintons go back a ways, to when Bill in the early 1990s sought out Kissinger’s support to pass NAFTA and to, in the words of the economist Jeff Faux, serve as “the perfect tutor for a new Democratic president trying to convince Republicans and their business allies that they could count on him to champion Reagan’s vision.” Hillary has continued the apprenticeship, soliciting Kissinger’s advice and calling him “friend.”

Still, Bernie Sanders, and Sanders supporters and surrogates, should use the Politico story to draw a line, making clear that they will withdraw their support of Clinton if Clinton accepts Kissinger’s endorsement. If Sanders stands for anything, it is the promise of decency and civil equality, qualities that he has worked hard to bestow on Clinton since the Democratic National Convention. By accepting Kissinger’s endorsement, Clinton wouldn’t just be mocking that gift. She’d be sending the clearest signal yet to grassroots peace and social-justice Democrats that her presidency wouldn’t be a “popular front” against Trumpian fascism. It would be bloody business as usual.

Kissinger is a unique monster. He stands not as a bulwark against Donald Trump’s feared recklessness and immorality but as his progenitor. As Richard Nixon’s aide-de-camp, Kissinger helped plan and execute a murderous, illegal foreign policy—in Southeast and South Asia, Southern Africa, the Middle East, and Latin America—as reckless and immoral as anything Trump now portends. Millions died as a result of his actions. Kissinger and Nixon threatened to use nuclear weapons, and, indeed, Kissinger helped inscribe the threat of “limited nuclear war” into doctrine. Kissinger, in the 1970s, not only dug the hole that the greater Middle East finds itself in, but, as an influential cheerleader for both the first Gulf War in 1991 and its 2003 sequel, helped drive the United States into that ditch.

Kissinger’s crimes aren’t just related to covert murder, genocide, and illegal bombing. In 1975, for example, as Gerald Ford’s secretary of state, he helped Union Carbide set up its chemical plant in Bhopal, India, working with the Indian government and helping secure a loan from the Export-Import Bank of the United States to cover a portion of the plant’s construction. Then, after the plant’s 1984 chemical-leak disaster, Kissinger Associates, the consultancy firm he set up after leaving the State Department, represented Union Carbide, helping to broker, in 1989, a $470 million out-of-court settlement for victims of the spill. The payout was widely condemned as paltry in relation to the scale of the disaster: The spill caused nearly 4,000 immediate deaths and exposed another half a million people to toxic gases. Kissinger Associates is a private company—Kissinger famously quit as chair of the 9/11 Commission so he wouldn’t have to reveal his client list—so the fees it extracted from Union Carbide for this service is unknown. But Bhopal is a good example of the way Kissinger, as a private consultant, profited from the work he did as a public servant (for Kissinger’s role in negotiating the settlement, see the 1988 letter obtained by the environmental reporter Rob Edwards, found here; also, see New York Times reports that Kissinger’s firm had an account with Union Carbide).

Kissinger’s role in helping to create today’s immiserating global economy and structural inequality didn’t start with NAFTA. As Gerald Ford’s secretary of state, Kissinger was key to making sure Saudi Arabia’s and, until its revolution, Iran’s growing mountain of petrodollars were recycled through private banks and arms merchants in Germany, the United Kingdom and the United States—undercutting Third World demands that capital be used to fund a more equitable global economy, what was then called a New International Economic Order. Likewise, in Latin America and Eastern Europe, Kissinger Associates profited from what one of its consultants called the “massive sale” of public utilities and industries, a sell-off that, in many countries, was initiated by Kissinger-supported dictators and military regimes (Kissinger’s fudging of the line between public policy and private finance, especially as it relates to the arms trade and petroleum extraction, echoes through many of the controversies of the Clinton Foundation; see David Sirota and Andrew Perez’s reporting, especially “Clinton Foundation Donors Got Weapons Deals from Hillary Clinton’s State Department” and “As Colombian Money Flowed to Clintons, State Department Took No Action to Prevent Labor Violations”). This sell-off was part of the global transformation to what is commonly called “neoliberalism,” and what in this campaign season has come to be known as Clintonism, as opposed to Sanders’s vision of a restored New Deal: the privatization of the world’s political economy and, in the name of “free trade,” its transformation into a series of speculative bubbles, cyanide-spewing open-pit mines, and toxic spills.

Keep an eye out for Kissinger’s response to Hillary Clinton’s overture, for over the long course of his public life he’s served as a good bellwether. With every right-wing lurch of the foreign-policy establishment, Kissinger lurched with it: supporting Richard Nixon, Ronald Reagan, and George W. Bush. It is to this list that Clinton now asks to be added.

Sanders shouldn’t wait for Kissinger’s answer. He should use the Politico story to proactively repudiate, as he did during the primary debates, Kissingerism, and demand that the Clinton campaign stop sniffing around for Kissinger’s nod. The point of such a move wouldn’t be to hold Kissinger responsible for all that is wrong with US foreign and economic policy. There are many fingerprints, not just Kissinger’s, on America’s imperial crimes, and Clinton has the backing of a large number of bipartisan war criminals and the intellectual authors of a good portion of the world’s misery.

Rather, making Kissinger a deal-breaker would recommit the Sanders movement to its original promise (unfortunately more often implied than explicitly stated in Sanders’s primary criticism of Clinton) of breaking this vicious cycle between war and “free trade,” helping to clarify how the mutually dependent relationship between militarism and neoliberalism was institutionalized during Bill Clinton’s presidency and affirmed during Hillary Clinton’s tenure as secretary of state.

Polls are moving in Hillary Clinton’s favor, which means that the danger this country—and the world—faces is not fascism but the leveraging of the fear of fascism for more horrible economic policies and more war. As Bill Kristol tweeted, “When Dems are finished running vs Trump’s foreign policy, they’ll be more hawkish than me.”