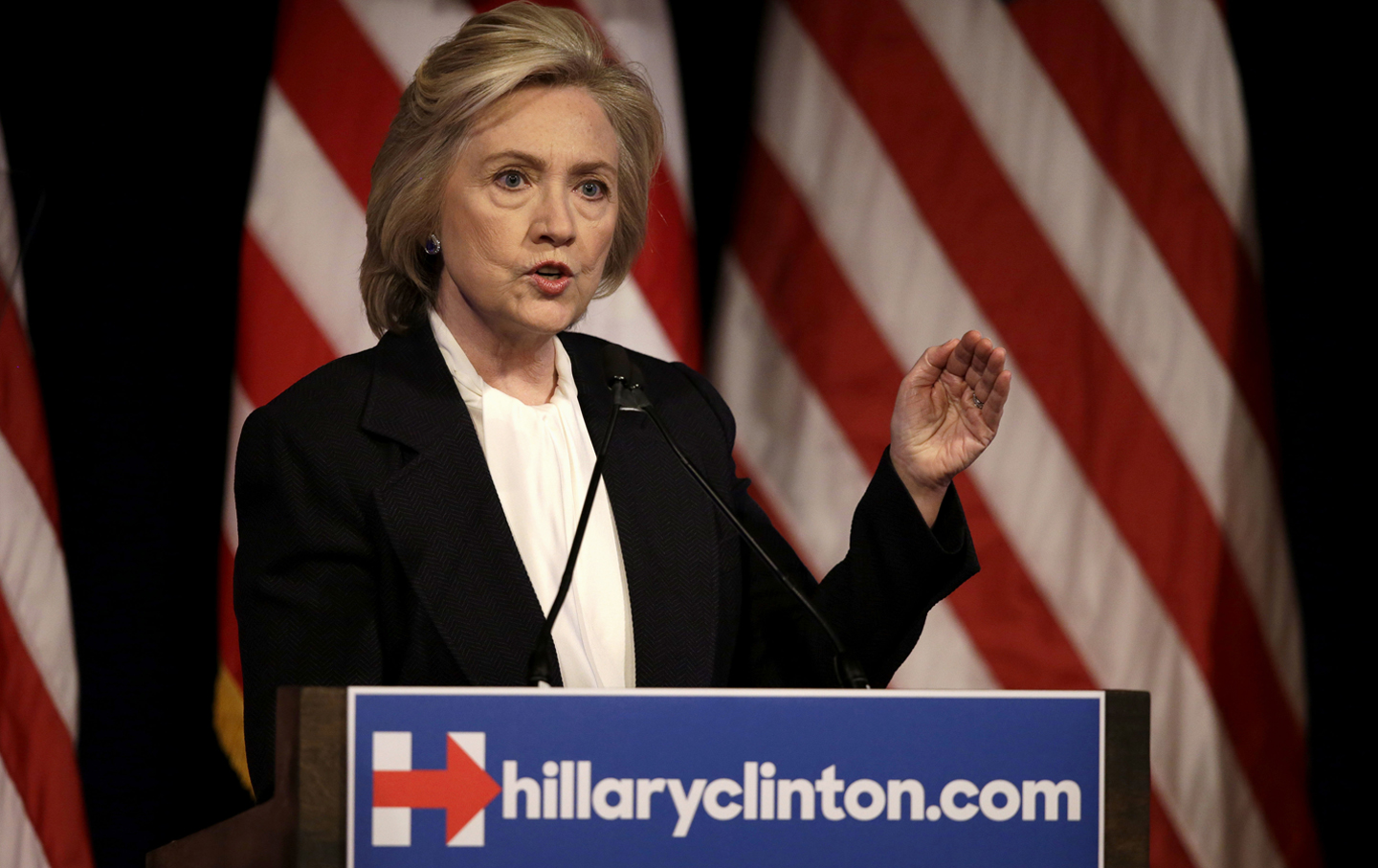 Hillary Clinton’s speech today was the most progressive address on economics by a major-party presidential candidate in a generation. It was strongly feminist and pro-union. It called for “enhancing” Social Security and stepping up prosecutions of Wall Street malefactors, and specifically attacked HSBC, the banking giant and Clinton Foundation donor. The speech marks a decisive break from the technocratic triangulation of her husband’s administration. As Lawrence Mishel points out at the Economic Policy Institute, it was notable that Clinton didn’t propose market-based solutions for wage stagnation, which she defined as the central economic challenge of our time. Rather than offering Third Way panaceas like worker retraining or middle-class tax cuts, she championed strong government intervention on behalf of workers: a higher minimum wage, strengthened collective bargaining, full employment, and cracking down “on bosses who exploit employees by misclassifying them as contractors.”

That last bit seems particularly significant for what it says about how much politics has changed since the 1990s. Clinton’s words, after all, seem to directly allude to an employment dispute at Uber. As a story about the contingent workforce in today’s New York Times begins, “When the California Labor Commissioner’s Office ruled last month that an Uber driver was an employee deserving of a variety of workplace protections—and was not, as the company maintained, an independent contractor—it highlighted the divided feelings many Americans have about what is increasingly being called the ‘gig economy.’” Whereas Bill Clinton was known for championing Silicon Valley, Hillary Clinton has taken clear aim at the employment model underlying some of its hottest companies.

It’s also important that Hillary Clinton has put paycheck feminism at the center of her economic agenda. The speech focused on all that’s lost when women are forced out of the workplace by inadequate leave and childcare policies, without any wishy-washy obeisance to the glories of housewifery. “The movement of women into the workforce over the past forty years was responsible for more than three and a half trillion dollars in economic growth,” Clinton said. “But that progress has stalled. The United States used to rank 7th out of 24 advanced countries in women’s labor force participation. By 2013, we had dropped to 19th. That represents a lot of unused potential for our economy and for American families. Studies show that nearly a third of this decline relative to other countries is because they’re expanding family-friendly policies like paid leave and we are not…. It’s time to recognize that quality, affordable childcare is not a luxury—it’s a growth strategy.” Again, we’ve come a long way from the ’90s, when Clinton was excoriated for making it clear that she valued her career over stay-at-home motherhood, and, as penance, had to participate in a bake-off with Barbara Bush.

The obvious progressive rejoinder to this is that Hillary—negotiator of the Trans-Pacific Partnership, onetime member of Walmart’s board—is simply saying what she feels she needs to in order to get elected. To which I’d say: exactly! Clinton is a politician who believes in expediency and pragmatism, and she has come to believe that it is expedient and pragmatic to run an explicitly liberal campaign. This is a powerful statement about the evolution of American politics. It’s long been a truism that Republicans fear their base, while Democrats hate theirs. That is no longer true; this is a speech meant to appeal to Elizabeth Warren’s supporters, not Clinton’s Wall Street friends.

But won’t Clinton simply do those friends’ bidding once in office? Perhaps, but the political-science literature suggests that, contrary to conventional wisdom, politicians actually try to fulfill their campaign pledges. Jonathan Bernstein looked at the scholarship surrounding the issue in a 2012 Washington Monthly piece, discussing a book by Jeff Fishel that analyzed campaigns from John F. Kennedy through Ronald Reagan. “What he found was that presidents invariably attempt to carry out their promises; the main reason some pledges are not redeemed is congressional opposition, not presidential flip-flopping,” wrote Bernstein. “Similarly, Gerald Pomper studied party platforms, and discovered that the promises parties made were consistent with their postelection agendas. More recent and smaller-scale papers have confirmed the main point: presidents’ agendas are clearly telegraphed in their campaigns.”

George H.W.’s Bush’s reversal on his “no new taxes” pledge is considered the exception to the rule. More typical is the way he chiseled away at government support for family planning. It almost certainly contradicted his personal beliefs; as a congressman, Bush was so passionate about birth control that he was nicknamed “rubbers,” and as US representative to the United Nations, he championed global action on overpopulation. As Reagan’s vice president, however, he recognized that fealty to the anti-abortion movement was non-negotiable, and after promising to serve it faithfully in office, he never dared defy it. Politicians have very strong incentives to do what they say they’re going to do, whatever their actual ideas.