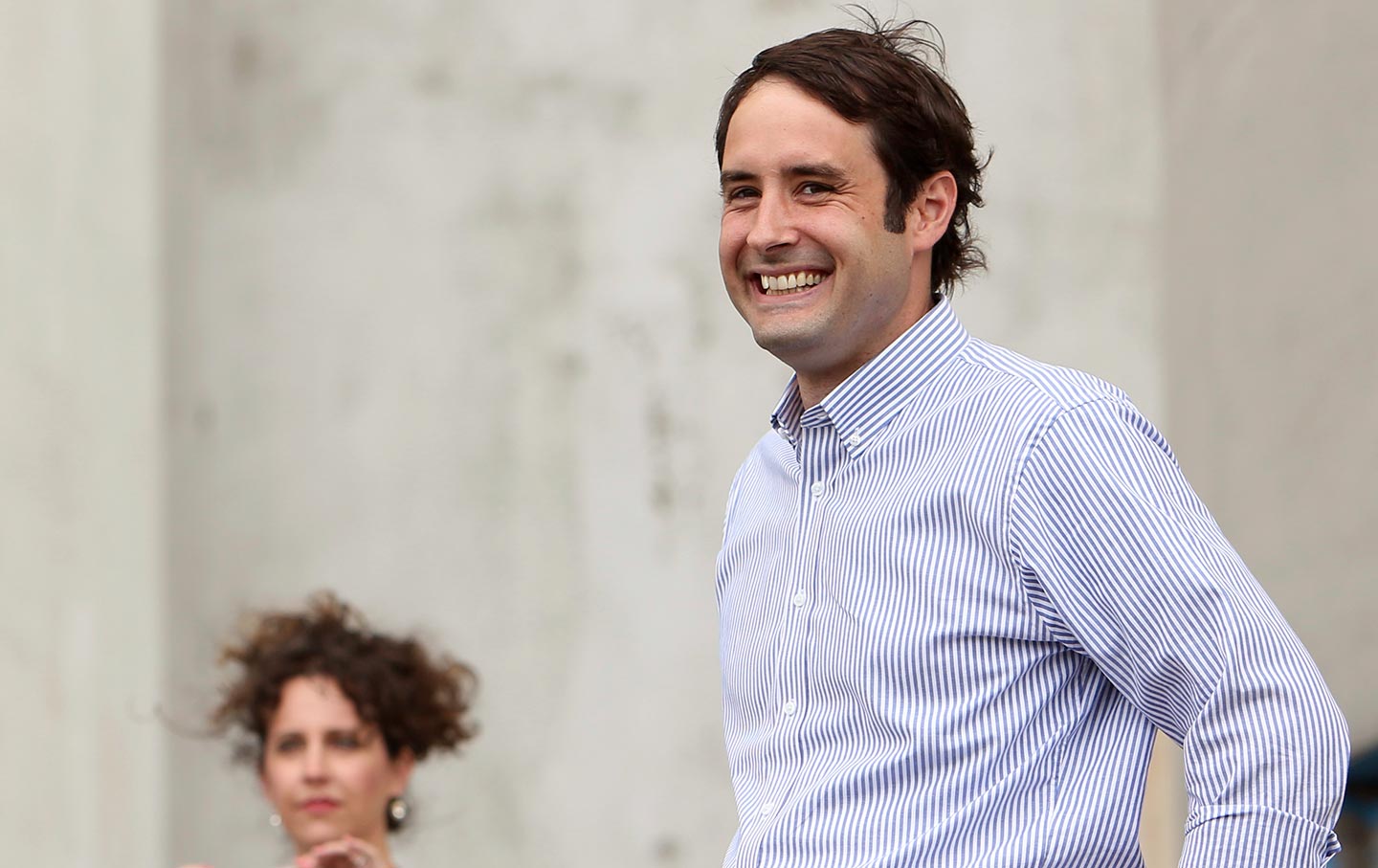 Joshua Svaty smiles for a photograph before announcing his candidacy for governor of Kansas, May 16, 2017. (Lindsey Bauman / The Hutchinson News via AP)

Imagine if Democrats, sick and tired of losing white votes in Mississippi, decided to nominate a segregationist for governor. Imagine if they found that LGBTQ rights turn off voters in Tennessee, so they ran one of those anti-same-sex-marriage Christian bakers. Imagine if they found that plenty of Oklahoma voters didn’t believe in climate change, so they ran a denialist. After all, why get hung up on one item in the long list of good things we all support when the important thing is getting back into power? Everyone has to take one for the team sometimes, right?

Don’t worry, Nation readers. These scenarios aren’t about to happen. Only women are expected to let history roll backwards over them. Only women’s rights to contraception and abortion are perpetually debatable, postponable, side-trackable, while those who insist on upholding the party platform—and the Constitution—are dismissed as rigid ideologues with a “litmus test.” Party leaders can’t come right out and say so—in fact, Democratic National Committee chair Tom Perez has issued a statement declaring that abortion rights are non-negotiable. But if you pay attention, you can feel the waters are being tested. House minority leader Nancy Pelosi told The Washington Post, “This is not a rubber-stamp party.” Why else would Perez meet with Democrats for Life? And why did so many pay such close attention to Heath Mello, a former state legislator in Nebraska with a long record of anti-abortion votes, who ran for mayor of Omaha with the approval of both Bernie Sanders, and, initially, Perez? Maybe they hadn’t done their due diligence and didn’t know, or maybe it was a test: Can we win in red states if we run anti-abortion candidates?

Only women’s rights to contraception and abortion are perpetually debatable, postponable, side-trackable.

After Mello lost, some blamed meddling out-of-state pro-choicers and the national media for making his many anti-abortion votes in the State Legislature a high-profile issue, despite the fact that his opponent was a reasonably popular Republican incumbent. So then why did the takeaway become “Ooh, look at those mean pro-choicers messing with our candidate” and not “Well, I guess being anti-choice isn’t such a vote-getter after all, and the price in nationwide opposition is too high to pay”? See above: because the issue concerns women’s rights. Amazingly, it is still an open question whether a woman is a person or a human bassinet.

Now comes Joshua Svaty, who is running in Kansas’s Democratic gubernatorial primary. Svaty, who served most recently as the state secretary of agriculture and EPA adviser, has a long anti-choice record from his years in the State Legislature (2003–9). He voted for no less than 11 anti-abortion bills, including one that declares the “unborn child” a person from the moment of conception, and a rather confusingly worded measure, vetoed by then-Governor Kathleen Sebelius, that would have allowed a woman’s husband, parent, or guardian to sue the clinic to prevent her from getting an abortion or receive damages if one had been performed. Never mind what the woman wanted; her pregnancy belongs to her family.

The conventional wisdom is that you have to be anti-choice to win in Kansas, where the “pro-life” movement is very militant. But is that true?

Kansas presents an opportunity for the Democrats. Governor Sam Brownback, who can’t run again due to term limits, has ruined the state’s finances, cutting education and other services to hand out tax cuts, and right now it looks as if the Republican candidate will be Kris Kobach, Kansas’s secretary of state, most famous for his ongoing efforts to take away voting rights from as many people as possible. The conventional wisdom is that you need to be anti-choice to win in Kansas, where the “pro-life” movement has long been extremely militant. But is that true? According to a 2016 poll, 30 percent of Kansans want to ban abortion completely, which is much higher than the national average; 30 percent want it to be legal; and 38 percent said they wouldn’t choose abortion for themselves but that the government shouldn’t prevent women from making their own decision. Over half said they would be less likely to vote for a candidate who wanted to defund Planned Parenthood, which Brownback tried to do before being blocked by the courts; 32 percent said they would be more likely to vote for such a candidate. Indeed, in 2016, even as Trump carried the state by 56.2 percent, Kansas Democrats elected 17 new members to the State Legislature, most of them pro-choice.

Remember, too, that Sebelius was a popular pro-choice governor until 2009, not so long ago. Her predecessor, Bill Graves, a Republican, was pro-choice as well. True, back in the 1990s, Democratic Governor Joan Finney was anti-choice, but Finney pretty much left abortion alone. Svaty is different. Like Mello, he was a hard-core extremist during his time as a legislator. “When I began my career, I was representing a very conservative, Catholic rural district,” he told me when we spoke by phone. “Governing the state is a big shift.” When I asked why he couldn’t have told his constituents that he wasn’t going to support bills that were flatly unconstitutional because that was a waste of money and time, he said, “I’ve gained a better understanding over time of what appropriate legislation is. I hope I’ve changed and improved substantially over time.” That’s not enough for Laura McQuade, president and CEO of Planned Parenthood Great Plains: “He needs to do a little bit more than move away from his record. He needs to embrace reproductive rights. Will he be a voice for change? That’s not what we’re hearing.”

What tends to get forgotten by those who push for the Democratic Party to run anti-abortion candidates is that the party base is pro-choice. That is who votes in primaries, and that is who knocks on doors and makes phone calls and gets out the vote on Election Day. An anti-abortion Dem might steal some votes from the Republican candidate, but at the cost of losing the most ardent Democrats—who happen to be women. “If you’re a Dem or unaffiliated pro-choice voter, you’re going to sit on your hands on Election Day,” says Julie Burkhart, the founder and CEO of Trust Women Foundation, a reproductive rights organization that owns and operates clinics in Wichita and Oklahoma City. “People are Democrats for a reason.” There’s a pro-choicer running in the primary, Carl Brewer, former mayor of Wichita. Sounds like he knows that.