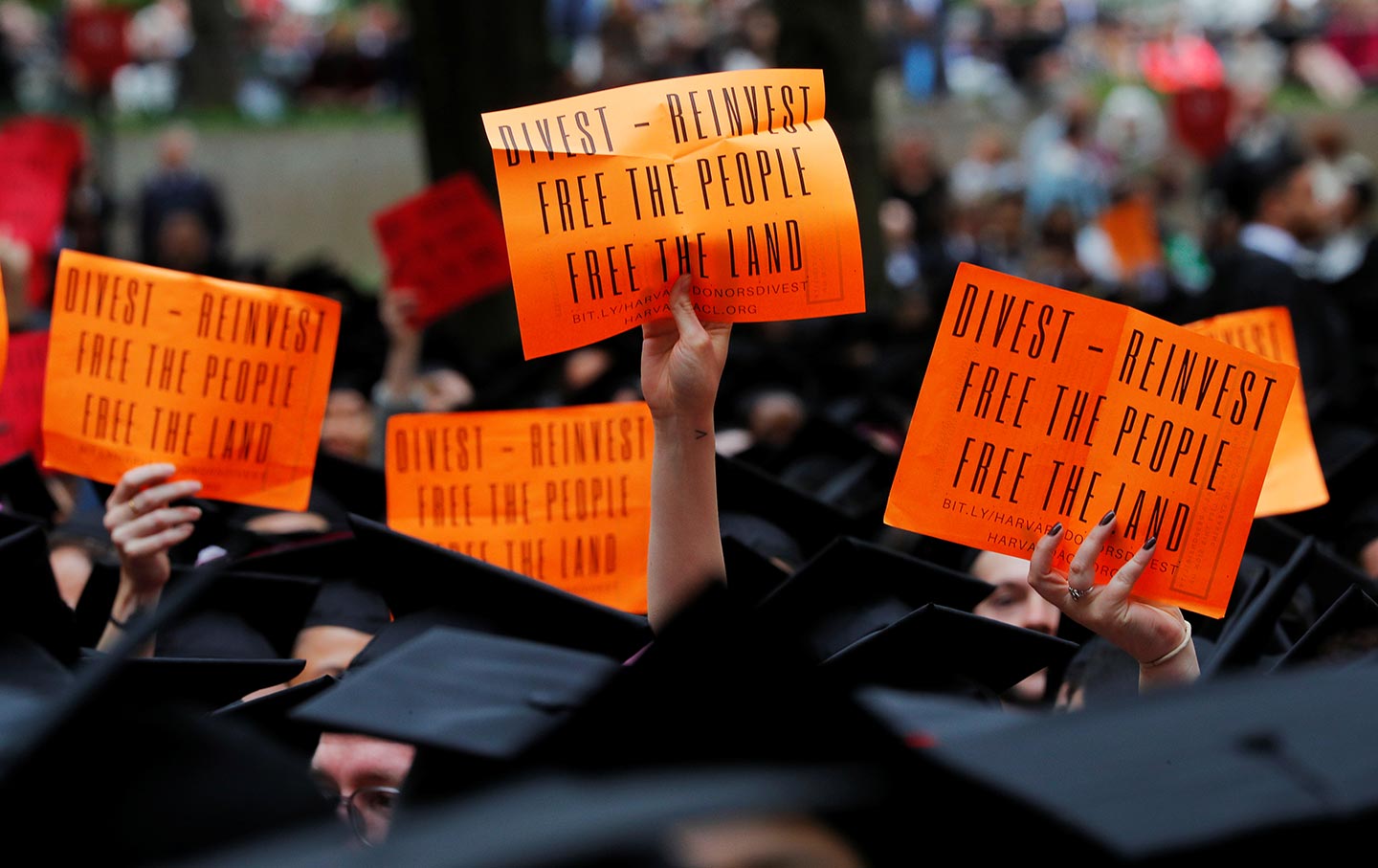 Graduating students call on Harvard to divest from prisons in May 2019. (Reuters / Brian Snyder)

At the start of Black History Month two years ago, the Black Student Union at California State University, Los Angeles, asked the school to divest from then–private prison contractor Wells Fargo. The BSU also demanded that the money be reinvested into funding the recruitment of black prospective students to the campus, developing a living-learning residence community for black students, and implementing mandatory coursework on diversity and race and ethnicity for the entire student body.

This focus was critical. Without reinvestment, we can work tirelessly to tear down an oppressive system only to have the void filled by something else equally oppressive. We need reinvestment to build the liberatory, supportive communities where each of us can thrive. For example, as communities rally to close jails and prisons, local governments sell so-called “modernized” plans to build essentially the same monuments to violence that historically led to community devastation. Prison profiteers sell ankle monitors as “more humane” alternatives, all while expanding the tendrils of who is under state surveillance.

In our organizing with the Harvard Prison Divestment Campaign, a reparative-justice initiative calling on Harvard to disclose its endowment holdings and divest from companies and investment firms that profit off the prison-industrial complex, our demands are explicitly twofold. We demand that Harvard disclose and divest, but we also demand that it reinvest in the communities that have borne the burden and violence of incarceration, enslavement, policing and control since the founding of our school in 1636. Students across the country, including at the University of Florida, the University of Chicago, and MIT, are making similar demands, under the collective banner of Freedom Campus.

Since Harvard President Larry Bacow refuses to commit to disclosure, divestment, or reinvestment, we believe we have every right to prefigure a different future in his stead. We are modeling what reinvestment can look like by launching a “Just Reinvestment Fund.”

Through the Just Reinvestment Fund, we call on alumni to stop donating to Harvard until it takes meaningful steps toward these demands, instead redistributing its wealth to local organizations, including the Boston Ujima Project, that are working toward building wealth for black, brown, and poor communities.

As two recent alumni from Harvard, we have ample opportunity to access the privileges that the university has amassed by investing in prisons and detention. But as people of color, we see the costs borne by our families, our friends and our neighborhoods. For centuries, the most powerful figures in our economy have systematically benefited from, and then divested from, the communities built by black, brown, poor, and working-class people.

Oppression bars communities from resources to facilitate the dreaming needed to contemplate liberated futures. For us, divestment and reinvestment are tactics in service of a long-game vision of abolition—which is the process of redefining safety away from police and prisons, but also moving into new systems of relationship with one another.

Previously, the Harvard Prison Divestment Campaign organized Abolition Action Assemblies, where we worked to educate students on how the prison-industrial complex operates through collective research and peer-to-peer pedagogy; we built collaboratively with social justice organizations in the Boston area similarly calling for a citywide shift to reinvest in people and the planet over corporate interests; and we gathered signatures from 3,500 community members who stand in support of these demands.

Our next step in this campaign, the creation of the Just Reinvestment fund, recognizes that the journey to reinvestment is as important as the destination. Reinvestment cannot be automated in Silicon Valley, nor will it succeed as a social media algorithm. For reinvestment to accurately reflect relationships on the ground, it has to be locally based, democratically self-governed, and rooted in community values. The processes appropriate for any given community will need to be determined collaboratively—and those decisions can be made only through deep relationships.

Typically, our system of wealth distribution reproduces hierarchy. Most philanthropists set charitable priorities based on personal interest. Neither is the current system of tax distribution designed to help those most in need: We have increased spending on criminalization to $180 billion per year in this country, rather than allocating sufficient funding for social investments in housing, education, and health care.

In Boston, the Ujima Project, a recipient of money raised through the Just Reinvestment Fund, is practicing in real time what a self-determined “community economy” looks like.

Part of the Ujima Project’s work includes showing the marked difference between representative democracy and deep democracy: In the former, a local government builds a park and then, in order to get buy-in, asks the community to vote on whether the benches should be painted red or blue. In contrast, deep democracy engages the community at the start, asking: Do you even want a park? If so, what would you like to be included in a park? If not, what should go there instead?

By formulating these questions and engaging neighbors to answer them—through community-wide assemblies, workshops, and creative mechanisms to facilitate voting—Ujima embodies the process of building new decision-making structures—the scaffolding of a people’s economy. Alongside more than 450 voting and solidarity members rooted in Boston’s black, brown, and working-class neighborhoods, the Ujima Project aims to model an economy that can begin to heal generations of structural racism, and make way for a future where all community members can not only survive but thrive, in the city they call home.

Many communities, like the one that has formed around the Ujima Project in Boston, are building out systems of self-governing cooperative economics that allow us to practice our politics in real time, building community land trusts, worker coops, and time banks where relational co-building occurs daily. In doing so, they are seizing their right to self-determination, acknowledging the often-devalued labor of marginalized people, and redefining “wealth” outside of exploitation.

These new, nonexploitative, and democratic economic systems will hold together the world without prisons, without borders, and without violence—but they need support.

Yes, we are calling for Harvard University to reinvest. But there is a broader swath of people with the ability to engage in that work sooner: alumni and donors. We are all entangled in this institution that has gained power through stolen wealth, but we can start to repair the harm we have profited from by showing up with resources for the work that heals the core of the intergenerational exploitation in which our school is implicated.

Reinvestment is an opening to the path to reparative justice. As such, a reinvestment conversation cannot be disconnected from reparations. Many people, including presidential candidates, struggle to understand reparations—despite the fact that black and indigenous communities have been demanding and explaining it for centuries. What politicians often miss is that reinvestment as reparatory justice is not just about moving money; it requires redesigning our whole society’s relationship to resources.

As young people, we see that the world is at a turning point. We can heal our relationships with ourselves only as we heal our relationships with each other—and that cannot happen when we are resourcing our separation with walls, borders, and systems of control and domination. Through reinvestment, we are choosing to turn toward nonexploitation and the liberation of all people.