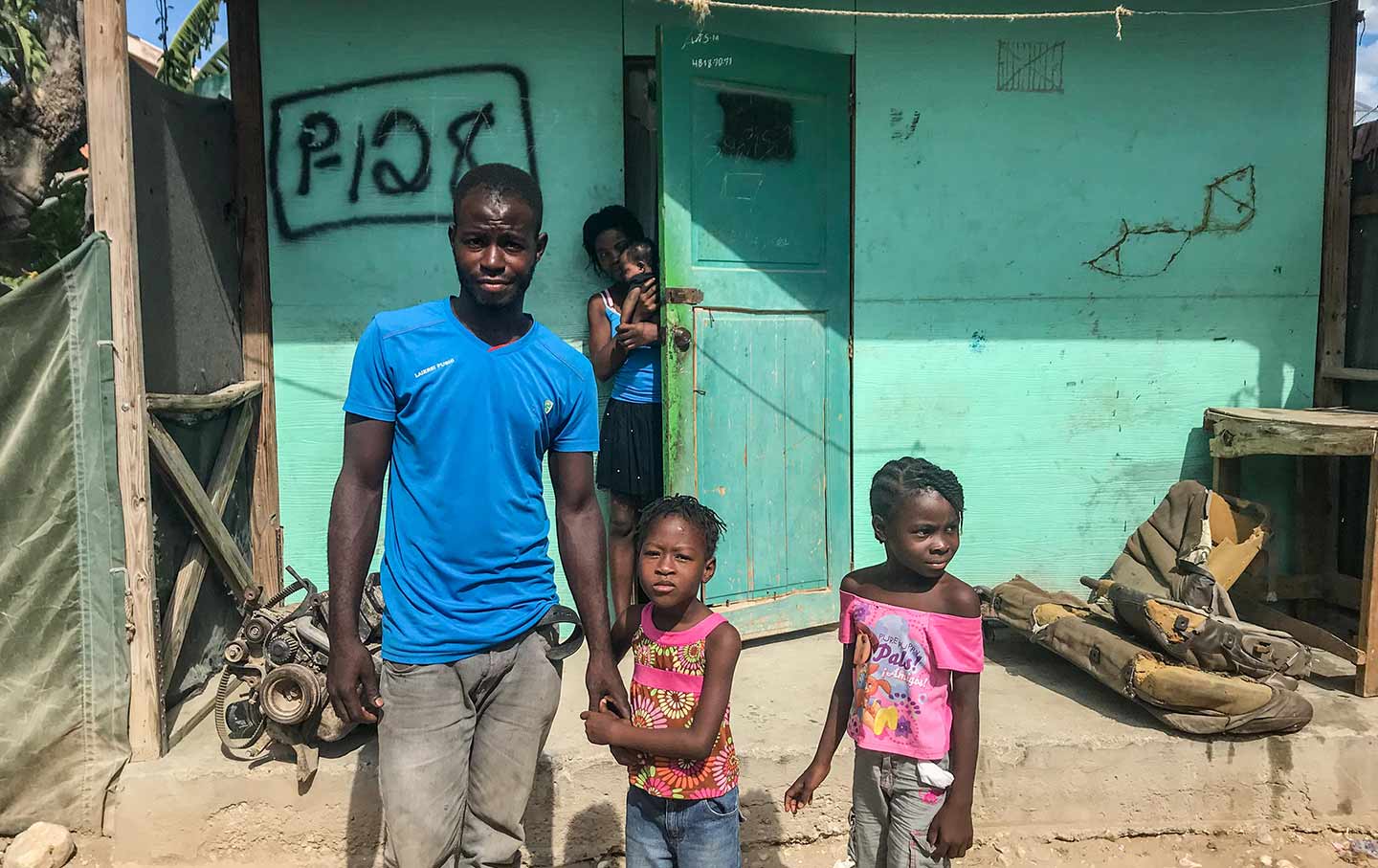 A family stands in front of their house in Canaan, a community of 300,000 on the outskirts of Port-au-Prince that was created after the 2010 earthquake, on September 1, 2019. (Nick Kaiser / Getty Images)

Port-au-Prince—Exactly 10 years after the awful earthquake that killed anywhere from 60,000 to 250,000 people and destroyed much of this capital, everyone I know here says the effort to rebuild has been a colossal failure, and most also argue that the US government shares some of the blame.

Haitians also unanimously believe that the reconstruction aid—$16.3 billion was originally promised—either was never appropriated, was misused, or was stolen by Haiti’s small economic and political elite. Bill Clinton, who headed the effort to “Build Back Better,” has not dared to visit publicly here for many years.

What’s more, Haitians believe the US State Department is the major force today that keeps their current corrupt president in power. For nearly two years, hundreds of thousands of Haitians have held nationwide demonstrations, including a recent general strike that shut down the country for two months, but Jovenel Moïse somehow remains president. One longtime observer, an insider in a previous government, said simply, “If the US Embassy signaled that it was no longer supporting Moïse, he would be gone within hours.”

Even worse, many Haitians, even people who are not normally alarmist, fear their country could skid into civil war. Clandestine arms shipments are reportedly pouring in, and heavily armed gangs, many linked to the Moïse government, carry out one massacre after another. 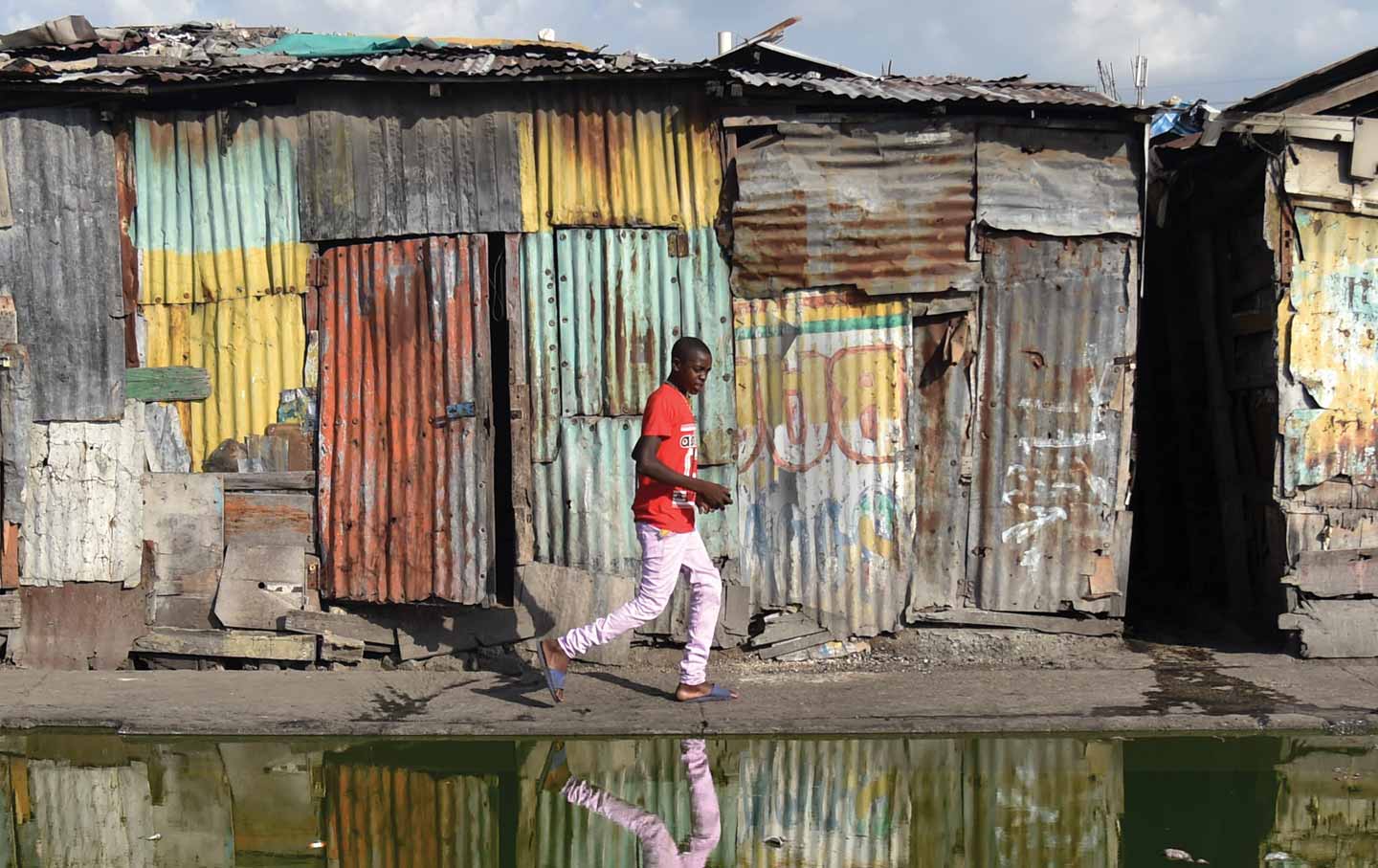 Haiti Is in the Eye of the Storm

I’ve known Jean Marcelin, a 56-year-old primary school teacher, since the 1990s, and he is by nature a calm person. But even he has had enough. We were driving the other day up one of the main arteries, Lalue (its official name is Avenue John Brown, after the 19th century American anti-slavery hero), and Marcelin burst out: “Every country in the world has corruption. But in the rich countries, the corrupt recognize that if they go too far the people will revolt. So the government provides a minimum: electricity 24 hours a day, safe running water, road repairs, a decent educational system.

“Here in Haiti, there is no minimum. We ordinary Haitians pay taxes like you do, but we only get electricity a few random hours a day, and we have no running water: We buy water by the bucket from young women who sell it in the street. No sewage system: We dig latrines in our yards and we pay men called bayakou to come regularly and clean them out. Education is not free, and the quality is poor. There is no minimum.”

Marcelin swerved to avoid an especially vicious pothole. “Look at the quality of our streets,” he exclaimed. “And when we march against the corruption, the government orders the police to shoot at us. No minimum. All we are asking for is a minimum.”

Over the holiday, there was a pause in the nationwide uprising, but everyone I talk to expects the resistance to resume. Yet the upheaval is scarcely reported in the United States. After the earthquake struck on January 12, 2010, the American mainstream press raced here en masse, but this time around there is a news blackout (with the valuable exception of the Miami Herald’s Jacqueline Charles). The US media apparently feels its audience prefers Haitians as victims rather than as a people with a proud history who are once again demanding their human rights.

The grim reality today is especially tragic because after the 2010 earthquake the outpouring of generosity from the United States and elsewhere prompted gratitude and raised hopes here. The immediate relief effort did help, by bringing emergency medical aid, water, and tents to house people from the 250,000 homes that were destroyed; the tents filled every square inch of open space in Port-au-Prince.

But once relief turned to reconstruction, the United States and the rest of the rich world made terrible decisions. Bill Clinton and his advisers ignored Haitians and imposed a disastrous plan. They should have concentrated on agriculture; instead, the centerpiece of their scheme was a giant $300 million garment manufacturing project that was supposed to create 65,000 new jobs in an enclave called Caracol, more than 100 miles to the north of the capital. A superb detailed report by Jacob Kushner has painfully documented how the US-instigated project is a complete failure, which has so far generated only 13,000 of the promised jobs—in a nation of 11 million mostly poor people.

Here in Port-au-Prince, the only new buildings Haitians can see are a few luxury hotels, nearly empty these days, and a handful of unsightly government office blocks, some of which are unfinished. The National Art Museum is still in ruins, 10 years later, even though Haiti’s bright paintings and innovative sculptures enjoy renown worldwide.

Eventually, after several years in some cases, several hundred thousand earthquake refugees left those blue tents and ended up on a treeless plain miles north of the city, where, as Kushner described movingly, they “invested more than $90 million of their own money to build some 20,000 houses.” They named their new refugee city Canaan—the Bible’s promised land.

The reconstruction failure is doubly tragic because an inspiring public health organization in downtown Port-au-Prince shows that another way was possible. GHESKIO was cofounded in 1982 by a Haitian doctor named Jean William (Bill) Pape, a man who surely deserves consideration for the Nobel Peace Prize. Pape returned home to Haiti after studying infectious diseases in the United States to encounter some of the first cases of HIV/AIDS. He got to work immediately. Today, GHESKIO employs more than 400 Haitians—doctors, health workers, and drivers—to regularly deliver life-saving ARV medications to 100,000 people who are living with HIV all over the country. The organization then expanded into other areas, including tuberculosis, cervical cancer, and more, and it also does cutting-edge medical research.

Visiting GHESKIO’s bustling main office and clinic in the Bicentenaire, a particularly poor part of the city, is an inspiration. Dr. Pape is 73, but the organization’s executive director moves like a man half his age. He explains that the ARV drugs have dropped in price, but still cost $250–300 per person a year. “Most Haitians can’t afford even that,” he says. “The United States supplies 90 percent of our needs. Without that help, thousands of people would be dying every month.”

Pape is proud that GHESKIO does thorough audits to prevent corruption. He smiled and jabbed his finger in the air, saying, “I can say that not one pill has been taken.” GHESKIO does all this on an annual budget of only $9.5 million, which is relatively small in the international aid business. A US-based branch, the Haitian Global Health Alliance, welcomes donations.