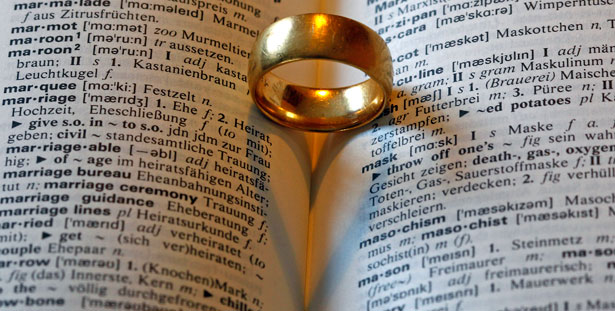 First it was Senator Marco Rubio: marriage is “the greatest tool” to lift people out of poverty. Then it was Ari Fleischer: the best way to fight income inequality is by “helping the poor realize that the most important decision they can make is to stay in school, get married and have children—in that order.” And then on Sunday it was Ross Douthat: “one of the biggest boosts to opportunity comes from having married parents.”

Conservatives are lately doing some thinking about poverty and income inequality, but the answer they seem to keep landing on is marriage. True, being married certainly is associated with financial benefits. The poverty rate is about five times higher for single parents than for married couples, which can have a significant impact on children’s well-being and future prospects. But to turn that from a statistic to a solution, the next leap would be to push for the government to push people into marriages. Unfortunately for conservatives, the government is terrible at getting people together.

In seeking to push people toward marital bliss, the government uses a carrot and a stick: incentivizing some couples with spending on pro-marriage counseling programs while attempting to penalize others who don’t marry by denying them tax benefits. Neither of these attempts to rig the marriage market work.

Take marriage promotion. In 2002, the federal government poured tens of millions of dollars into a project called Building Strong Families, which offered more than 5,000 unwed couples across the country group sessions on relationship skills and support services to boost marriage rates. It cost an average of $11,000 per couple. Yet three years later, an independent review of its efficacy found that it was a flop. It had no effect on whether the couples got married or even whether they stayed romantically involved. In fact, the couples who took part in the program were slightly less likely to stay together or live together than those in a control group.

Another review found slightly more optimistic but not promising outcomes. Researchers analyzed the relationship between state spending on Healthy Marriage Initiatives—relationship education programs—and how many married adults lived in the state. The positive association they found all but disappeared when one outlier, Washington, DC, was taken out of the results. In short: all this spending has done little to boost marriage.

But even if these programs were effective at pushing couples together, they might not help single mothers. Low-income single mothers’s relationships are much more likely to be highly unstable and low-quality. And there is often little benefit from getting married: in a recent study, Ohio State University Associate Professor of sociology Kristi Williams analyzed more than thirty years of data and found “no physical or psychological advantages for the majority of adolescents born to a single mother whose mothers later married.”

And that’s if they stay married. Just because a single mom ties the knot doesn’t mean the union will last. A nationally representative study of more than 7,000 women found that two-thirds of single mothers who married ended up divorced by the time they were ages 35 to 44. That leaves them worse off: single mothers who never marry are in better financial shape than those who marry just to end up single again.

If spending on pro-marriage campaigns is the government’s carrot enticing couples toward getting married, it uses the tax code as the stick, ostensibly tailored to make marriage financially rewarding and staying single more expensive. Yet while the majority of couples see a marriage “bonus” from the ability to file jointly, that doesn’t hold true for everyone. Putting two people’s incomes together can sometimes trigger higher tax brackets than if they filed separately. In 1997, when the Congressional Budget Office last issued a report on the topic, 42 percent of couples got a penalty, although changes since then have lessened the problem. These penalties hit couples who earn similar amounts of money, particularly at the bottom and top of the income scale. Low-income couples—the very people the government has nudged toward marriage—are the most impacted, as they are more likely to make different decisions based on incentives or costs. Given these complications, as Anne L. Alstott argues in a paper for Tax Law Review, “joint filing is an exceptionally poor tool for encouraging people to marry and stay married.”

But if the tax code succeeds at incentivizing any marriages, it is also mostly pushing people toward one outdated family formation: a breadwinner and a homemaker. Couples who have similar incomes are the most likely to incur the penalties, but as the Tax Policy Center explains, “Couples in which one spouse earns all of the couple’s income never incur a marriage penalty and almost always receive a marriage bonus.” Fewer and fewer families are likely to take advantage of that bonus, then. Just one in five families features a stay-at-home mother and a father who earns the money. On the other hand, the percent of families that rely on women’s income just hit a record high.

It might sound complicated to extricate the government from all the ways it has invested in marriage. But it doesn’t have to be. Instead of joint filing as an ill-advised attempt to reward marriages in the tax code, all earners could file individually with one income tax schedule for everyone, thus undoing the penalties many married couples face while treating unmarried couples and single people equally. Rather than throwing money at marriage promotion campaigns that don’t have much of an impact, the government could instead put it toward policies that can help single parents survive. Williams found that low-income women need greater access to family planning. Once they have children, single mothers need better access to health insurance and high-quality childcare, a stronger welfare system, and paid leave for a new child or to care for ones who get sick. The lack of these policies make American single mothers the worst-off single parents among developed countries.

These policies also have the added benefit of meeting people where they are. The share of people who decide to get married has been steadily shrinking for a half century, while the number of people who never get married has been growing. Forcing a hard stop or even a reversal of these trends is unlikely. But our policies don’t need to penalize people for the different decisions they make. Being single doesn’t need to be a financial death knell.

Watch Next: Michelle Goldberg explains why marriage does not alleviate poverty.