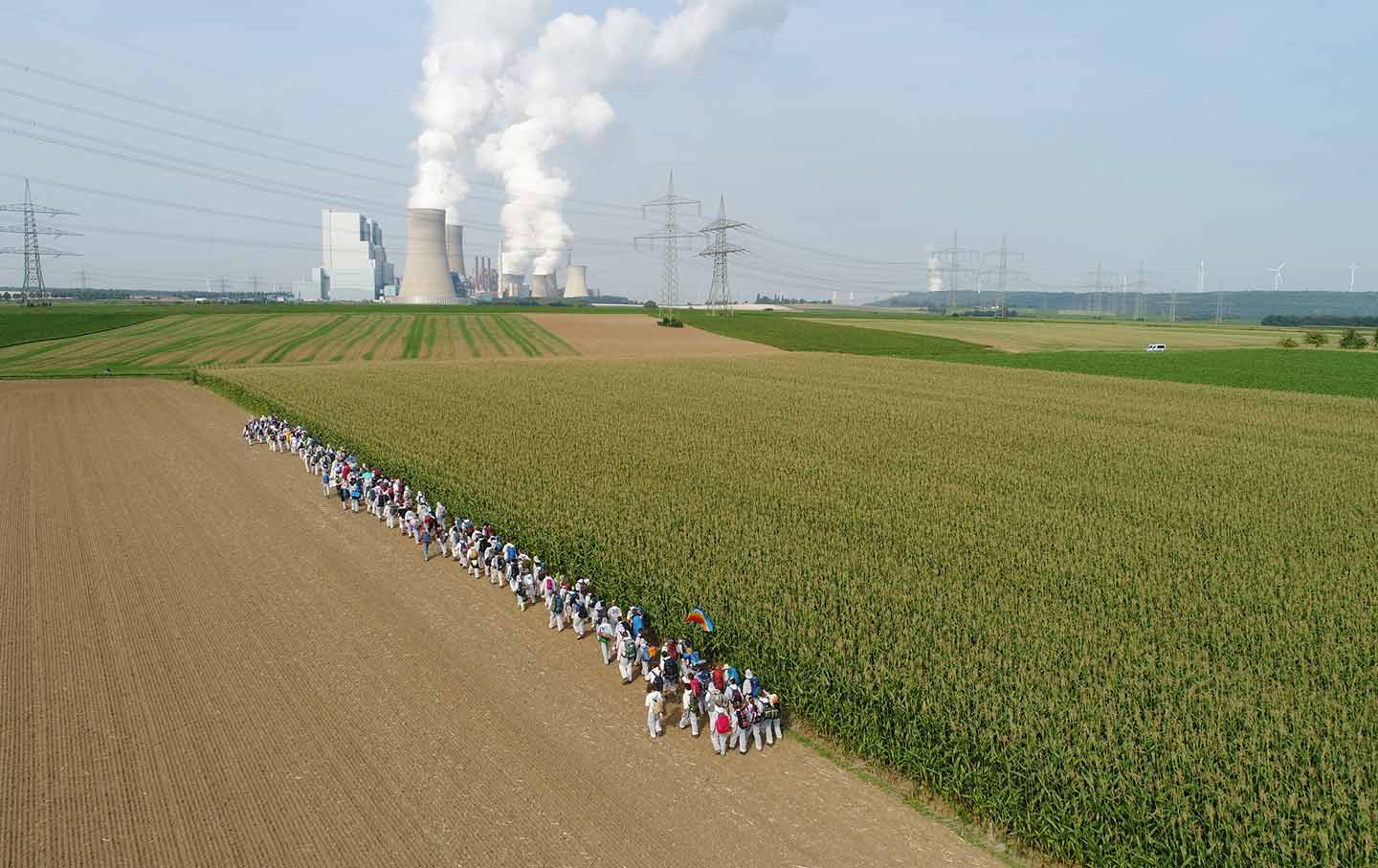 By late Friday afternoon, reports started to trickle into the Climate Camp from across Germany’s western Rhineland, home to Europe’s largest coal fields. “They’ve got 90 of us in police custody in the village of Hochneukirch! But we’re still on the tracks blocking transports to Neurath, nine hours now!” shouted Insa Vries of Ende Gelände, or Stop, No Further, the spearhead of Germany’s anti-coal movement. High fives and whoops went around the exhausted protesters, who, having returned from their sorties, were strewn across the hay-carpeted floor of the camp’s main circus tent not far from the Dutch border. “And today’s taz calls us the newest, most interesting social movement in all of Europe!” cried Vries into the microphone, waving Die Tageszeitung, Germany’s left-wing daily, in the air.

There’s something to taz’s proclamation. In terms of energy and argument, the young movement shows every sign of expanding beyond Germany and its base of 20-somethings. Currently, Germany is the epicenter of Europe’s anti-coal campaign, which is led by Ende Gelände and includes other groups, many of which have roots that reach back to the anti–nuclear energy movement (whose campaigns over four decades forced Germany to exit nuclear power). Their aim is to obstruct the infrastructure of Germany’s mighty coal industry, even if temporarily, through acts of nonviolent civil disobedience.

Any one of the roughly 3,500 protesters residing in the three tent camps—pitched at strategic sites between half a dozen power stations and their open-cast mines—can explain the consensus that binds and motivates them: In size, Germany’s brown-coal production and coal-fired power generation are second to none in Europe; the same goes for the industry’s enormous CO2 emissions. Low-quality brown coal causes a third more CO2 emissions than hard coal and is twice as dirty as natural gas. When located close to power plants, as is the case in the Rhineland, it is Europe’s cheapest fossil fuel, which is why German industry favors it.

Yet Germany refuses to set a date to shut down the brown-coal mines in the Rhineland and Lusatia, a region in easternmost Germany flanking Poland. Despite world-renowned renewable-energy policies, coal still covers 40 percent of the country’s electricity needs and means thousands of jobs. It’s subsidized, and farm lands as well as whole villages continue to be razed to make way for new open-cast coal pits. West of Cologne, militant protesters have occupied Hambach Forest, marked as a future mine site, for the last five years, refusing leave despite court orders and police raids.

At the movement’s annual climate camp, the six days (from August 24–29) of training, discussion, and protest are embedded in a larger critique of neoliberalism. The camp encompasses a range of activist groups, some such as Ende Gelände and Zucker im Tank (Sugar in the Tank) that are firmly committed to civil disobedience, as well as others with less confrontational strategies, such as Greenpeace and Friends of the Earth, which organize classic street demonstrations and petition political parties. “We want to raise the stakes until the politicians can’t ignore it anymore,” one young man told me, who thought this was enough to bind the diverse political views.

On my first day in camp, I stuck pretty close to home. The six-acre spread, leased from a local farmer and organized by young German anarchists, was a Wunder of German planning and system logic. One area surrounded by forest was designated for private tents meant for sleeping. In a broad clearing off a country road, larger tents and other makeshift structures dotted the landscape: a second circus tent full of literature and posters, next to it a mobile kitchen staffed with a dozen workers dicing onions and zucchini. Every organization had its own tent for strategic planning purposes and to act as a press office. There were DIY showers, rows of portapotties, chill-out rooms, and detailed schedules tacked on walls with volunteers signed up for everything. An alternative-energy start-up had solar panels scattered on the grounds that generated (almost) enough electricity for the whole camp to run all at once. Around dinner time, tubs of piping hot pasta appeared with red sauce and cucumber salad—and red wine, too, for a couple euros.

Although the camp immediately reminded me of those built on or around nuclear power plant sites in the West German 1970s and ’80s, it was soon clear to me that this younger generation wasn’t just mimicking their parents but that they’d learned from them. Their meetings were short and to the point, not a participatory free-for-all or seminar in democratic theory. They emphasized that although they broke the law, they understood that violence, like that in the 1980s or even more recently at the G20 in Hamburg, was counterproductive, diverting attention away from their messages. Their media savvy was fresh too, unlike the paranoid radicals of the 1980s who believed they were fighting a police state that included the media. “It’s so cool to have you here!” one spokesperson told me sincerely.

I asked Hazel, a 21-year old student from Mannheim, “Why civil disobedience?” She responded: “Everyone in the know understands that Germany isn’t going to meet its 2020 and 2030 climate goals,” referring to Germany’s pledge to cut greenhouse gases by 40 percent and 55 percent, respectively, compared with 1990 levels. The Paris climate accord is now law. There are laws against pollution, she said, but “they’re being broken, and nothing happens. The whole system is structured so that they can do that. So we have to break laws to stop them.”

Johanna Winter, a 21-year-old gardener from Lower Saxony said: “Most of the political parties don’t want to exit coal. The Greens want to, but can’t. So if the change that needs to happen can’t happen from within the system, we have to move outside of it.”

A good half of the activists with whom I chatted were first timers. Like millions of other Germans, they had seen the breathtaking images of last year’s climate camp when protesters streamed over the grassy hills of the Lusatia, east of Berlin, to occupy an entire coal pit and all of its machinery. The local police opted not to defend the utility’s property, citing too high a cost. The broadcast images of activists blocking a power plant for 48 hours looked like a jubilant mass picnic on a sunny day.

The next day, I tagged along as over 1,000 activists—more women than men, a queer contingent there in numbers—met at the second camp, setting off as one column in rows of six, linked arm-in-arm. Only a select handful knew the destination beforehand, a means to keep the objective from the police. In contrast to past movements using civil disobedience, most protesters set off from the camp without any ID at all, their finger pads smeared with a transparent glue, and faces disguised with masks, glitter, and face paint. The purpose was, if detained, to avoid landing on black lists, which could then be drawn from to press charges or levy fines at a later time. Since German law-enforcement officers can hold detained persons only for 12 hours without an arrest, they must release detainees whether their identities have been ascertained or not. Nevertheless, they photograph and fingerprint detainees when at all possible, which the disguises and glue make laborious.

We set out with banners and backpacks, about 90 percent of the troupe wearing hardware-store-purchased disposable white coveralls. The sight was an eerie one: anonymous, genderless hooded figures marching across fields of carrots, potatoes, and kohlrabi, with the belching power plants across the horizon in the background. Twice, the 40 or so police ahead of us made half-hearted attempts to block the road. The column’s front lines, stocked with the brawnier veterans, linked themselves together like a rugby team and pushed heads down, sending the police back on their heels and opening the way for the others to stream forward. After six miles of cat-and-mouse with the police, our part of the larger column, which had divided in two during the march for strategic reasons, made it to the private railway tracks between the Niederaussem power plant and its mines, owned by RWE, the Rhineland’s biggest utility company. Three hours later the police had cleared the tracks, but not before canisters of soup and 400 gallons of water showed up, compliments of the camp’s kitchen staff.

Like last year, the German media covered the photogenic protests extensively, and with sympathy. This year, the Greens and the Left Party participated in the demonstrations organized from the third camp, which included a 3,000-strong human chain involving many people who’d come for the day from Germany, the Netherlands, and Belgium.

Yet there’s no political momentum in Germany to set a concrete date to exit coal, even though 72 percent of Germans want it. Too many jobs in the Rhineland and Lusatia depend on it. This, however, won’t dissuade the growing movement. In early November, the international community will meet in Bonn, another Rhineland city, to chart the implementation of the Paris agreement. Another climate camp will arise near Bonn, open to anybody who believes that climate protection is our foremost political priority. Jobs are important, but as one of the August camp’s placards reads: “How many jobs are there on a dead planet?”