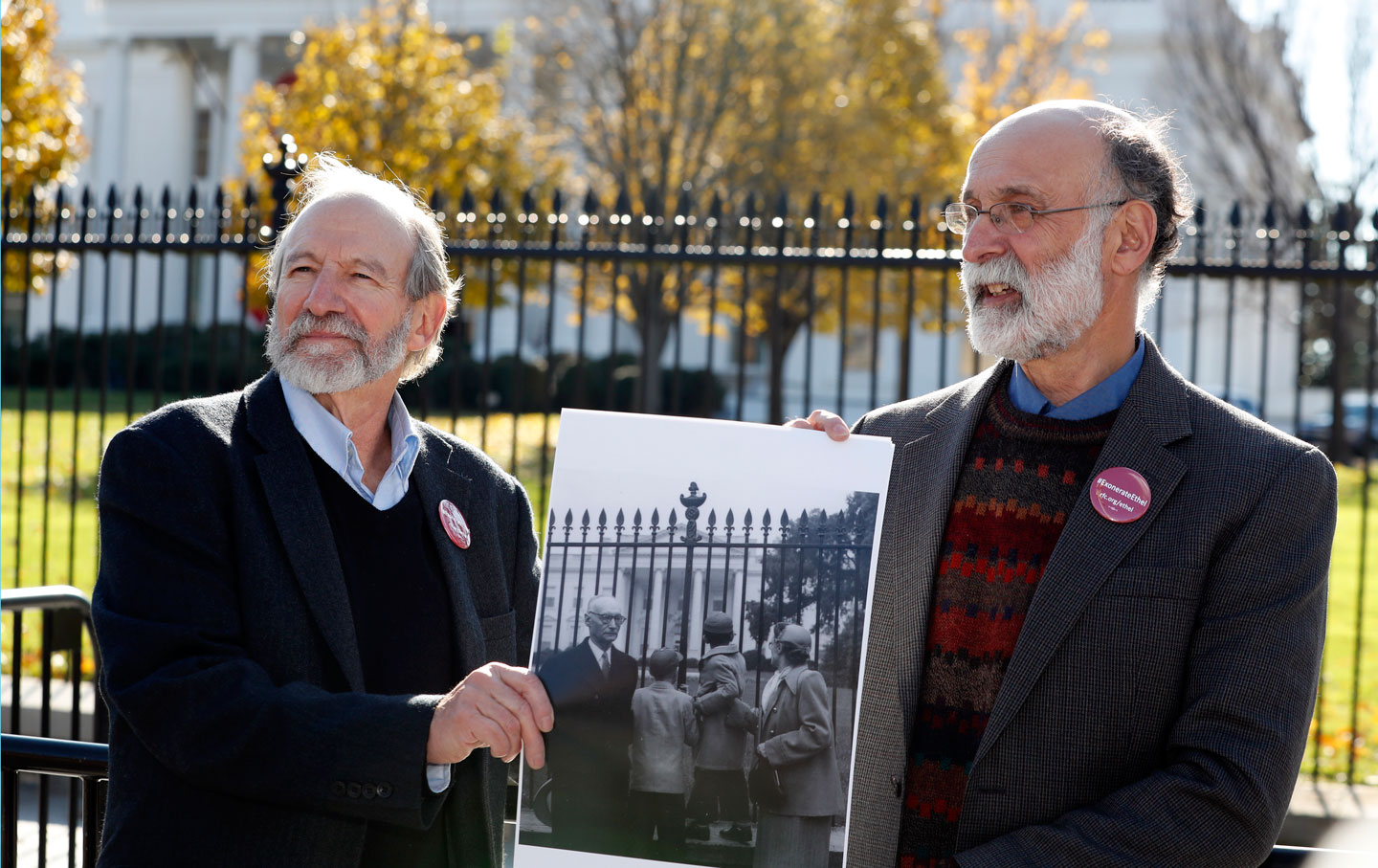 Last month the sons of Ethel and Julius Rosenberg, now balding men of 73 and 69, stood outside the gates of the White House. The first time they stood there, in June 1953, Michael was 10, Robert 6, and the man in the White House was Dwight Eisenhower. Their parents were scheduled to die in a few days, and the boys had come with their paternal grandmother to beg the president to spare their lives. Now, in the final weeks of the Obama administration, Michael and Robert Meeropol (their adopted name) had returned to ask the president to exonerate Ethel. For although the sons have come to accept that their father committed espionage on behalf of the Soviet Union during World War II, they are convinced that their mother was not a spy. “We are giving the United States government the chance…to acknowledge the terrible wrong it did to her and to us,” Robert told reporters.

In support of their request, the Meeropols submitted a petition with over 40,000 signatures collected by the Rosenberg Fund for Children, an organization founded by Robert. They also delivered to the White House copies of testimony given to a federal grand jury in 1950 by Ethel’s brother David Greenglass and David’s wife, Ruth. The grand-jury minutes, which were not fully available until 2015, have added to the growing body of evidence that David and Ruth—the only witnesses against Ethel—lied about her role in the espionage conspiracy.

The campaign for Ethel’s exoneration was given a boost recently when the Center for Policy and Research at Seton Hall University Law School in New Jersey released a report provocatively titled “The Government’s Hostage: The Conviction and Execution of Ethel Rosenberg.” The 25-page report, which is based on an independent investigation led by the director of the center, Professor Mark Denbeaux, withholds judgment about whether Ethel was guilty of conspiracy to commit espionage, the offense for which she was tried, convicted, and executed. The investigators are, however, severely critical of the government’s prosecution of Ethel. Among their key conclusions: “the evidence upon which [Ethel’s] conviction was based was threadbare,” and “Ethel was merely a pawn used for leverage in the government’s attempt to build a case against Julius Rosenberg.”

The Seton Hall report uses pretrial documents and trial testimony to show how—and why—J. Edgar Hoover’s FBI, the US Justice Department, and a team of US Attorneys from the Southern District of New York (one of whom was Roy Cohn) targeted Ethel and pursued her to her death. Most of the pretrial documents it cites are not new, but were obtained decades after the trial through a protracted Freedom of Information lawsuit filed by the Meeropols, and were evaluated in 1983 in an expanded edition of Invitation to an Inquest, a study of the case Walter Schneir and I coauthored. But by focusing solely on Ethel, the report lays bare the injustice visited upon her by high officials of the federal judiciary.

The government’s cynical scheme to use Ethel as a lever to pry a confession from her husband was formulated early in the investigation. An internal FBI memo dated July 17, 1950, the day of Julius’s arrest, reported that the head of the Justice Department’s Criminal Division had advised the bureau that “there was insufficient evidence to issue process against [Ethel] at this time,” since her participation in the conspiracy was attested by only one person, her sister-in-law Ruth Greenglass. However, the FBI memo continued, the Justice Department “was of the opinion that it might be possible to utilize [Ethel] as a lever against her husband.”

In Ruth’s initial statement incriminating Ethel, which she signed on July 14, Ruth alleged that Julius had asked her in 1944 to help recruit David as a spy, and Ethel had seconded his request. On July 17, the date of the FBI memo initiating the “lever” strategy, Ruth signed a new FBI statement expanding Ethel’s involvement. She now claimed that Ethel had been present in January 1945 when David and Julius prepared a recognition device (a torn piece of a Jell-O box) for a future espionage rendezvous.

David quickly corroborated Ruth’s July statements, and Ethel was taken into custody on August 11, 1950, less than a month after Julius’s arrest. She remained behind bars for the rest of her life, insisting to the last that she was not guilty. Her sons meanwhile were set adrift on a three-year odyssey that took them from their maternal grandmother, to a Bronx children’s shelter, to their paternal grandmother, to a sympathetic New Jersey couple, to a residential school in Pleasantville, New York, and finally to the home of loving adoptive parents.

In early 1951 Assistant United States Attorney Myles Lane, who was part of the prosecuting team in New York, came to Washington to testify before the Joint Congressional Committee on Atomic Energy. He explained to the assembled senators and congressmen that it was important to get Julius to cooperate because he was “the keystone to a lot of other potential espionage agents.” Lane conceded that “the case is not too strong against [Ethel],” but if she was given “a stiff sentence of 25 or 30 years,” Julius might be persuaded to talk. This Alice in Wonderland scenario—“Sentence first verdict afterwards”—was especially bizarre because the only evidence linking Ethel to the conspiracy at this late date was still Ruth’s July statements.

As the trial date approached without any sign of the Rosenbergs’ breaking their silence, it became clear that the prosecution would have to shore up the case against Ethel. Ten days before opening day, the FBI again resorted to Ruth Greenglass. A confessed co-conspirator herself—and therefore in constant danger of being named a defendant and incarcerated along with her husband and the Rosenbergs—Ruth obliged the FBI with a new sworn statement. She now alleged that during a visit to the Rosenbergs’ New York City apartment in September 1945 David gave Julius secret information on the atomic bomb and Ethel typed it up. Two days later, David confirmed Ruth’s account. Both Greenglasses related the story to the jurors at the Rosenberg trial. This testimony, say the Seton Hall authors, was “the focal point in the government’s case to prove Ethel’s complicity.” In his summation to the trial jury, the chief prosecutor charged that Ethel “sat at that typewriter and struck the keys, blow by blow, against her own country in the interests of the Soviets.”

The Seton Hall report next compares David and Ruth’s grand-jury testimony about Ethel with their trial testimony seven months later. The disparities are stunning. Ruth said nothing to the grand jury about the critical September meeting at the Rosenberg apartment. Instead, she claimed that the last time David provided classified data to Julius was the previous June, when he delivered it to a courier. Nor did David mention the September 1945 meeting in the Rosenbergs’ apartment to the grand jury. Responding to questions about spying, David said, “My sister has never spoken to me about this subject.”

Not discussed in the Seton Hall report (presumably because it is not part of the official legal record) is information based on Soviet-era KGB files transcribed by former KGB agent Alexander Vassiliev and made public in 2009. It is noteworthy that nowhere in that voluminous compilation is there any reference to Ethel typing. Moreover, although Julius, David, and Ruth were given KGB code names, Ethel was not, indicating that the Russians did not consider her an espionage agent. Also omitted from the Seton Hall report is the fact that David himself has repudiated his typing testimony. In a 1996 interview with New York Times reporter Sam Roberts, David commented, “I frankly think my wife did the typing, but I don’t remember.”

What the report does highlight is the prosecution’s failure to take advantage of multiple opportunities to question witnesses about Ethel. Time and again during the pretrial period, the interrogators grilled potential witnesses about Julius’s activities, asking few or no questions about Ethel. They evidently were so certain the “lever” tactic would work, they did not bother to build a case against Ethel. The government’s deadly game of chicken ended on June 19, 1953, when Ethel died in the electric chair at Sing Sing prison. As William P. Rogers, a deputy attorney general at the time of the executions and secretary ofstate in the Nixon administration, later admitted: “She called our bluff.”