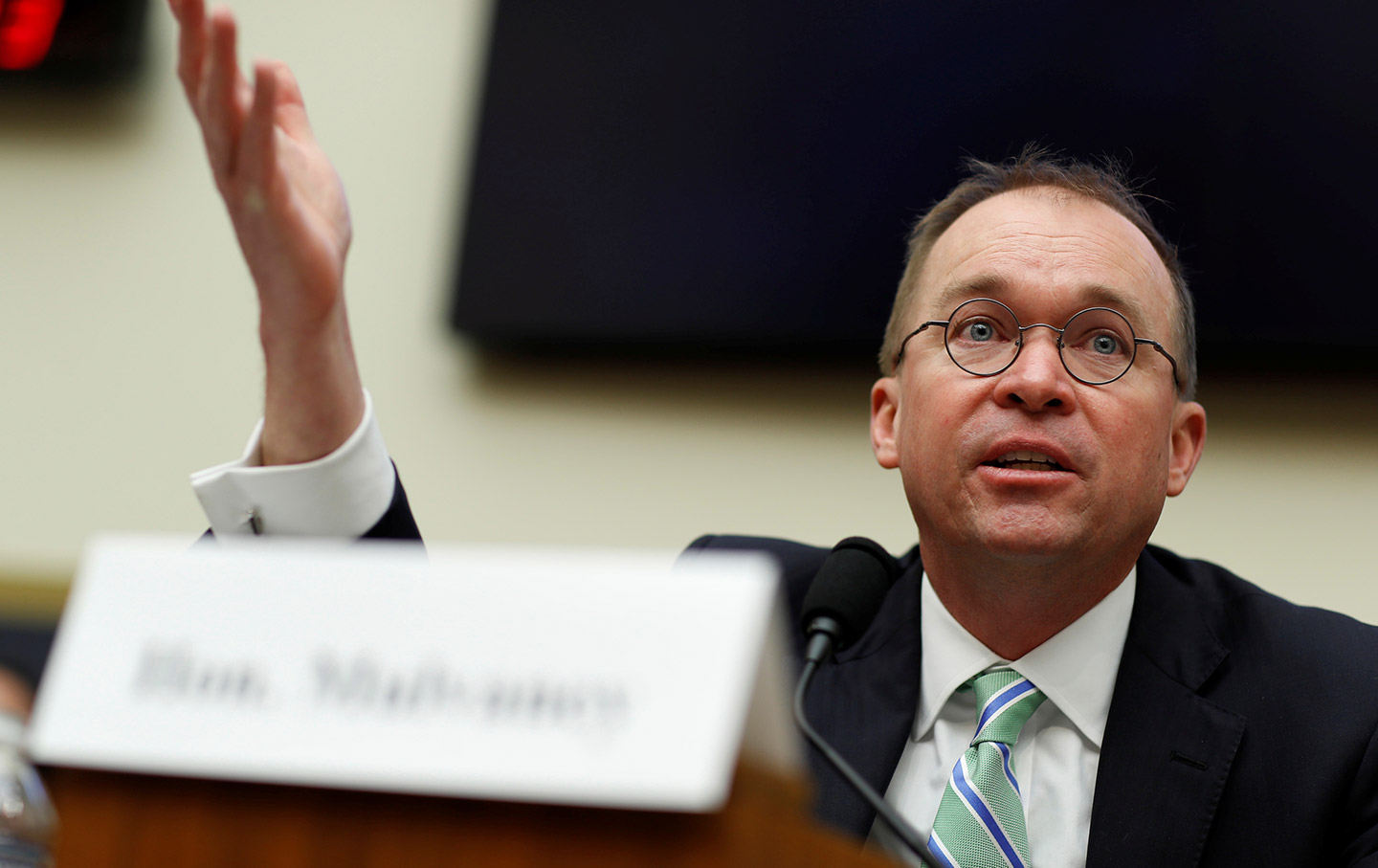 Mick Mulvaney, the director of the Office and Management and Budget, who is also moonlighting as a financial regulator, has literally decided to demote the “Consumer” in the Consumer Financial Protection Bureau. In public communications he now calls it the Bureau of Consumer Financial Protection, formalizing it in the new cookie-cutter seal. And failing to put consumers first has been a trend for Mulvaney.

The Associated Press reported this week that the CFPB, or BCFP (actually, there’s no way I’m calling it that), has not recorded one enforcement action in the 135 days since Mulvaney took over last November. As Sherrod Brown, ranking Democrat on the Senate Banking Committee, said in Mulvaney’s semi-annual report to Congress Thursday, the number of enforcement actions on his watch are actually negative four, because the agency “has withdrawn lawsuits against four payday lenders that charge consumers triple-digit interest rates.”

Under previous director Richard Cordray, the CFPB would send reporters a press release practically every week announcing some enforcement action against a bank or credit-card company or debt collector. It returned $12 billion to consumers who were wronged in their financial transactions. Today, Mulvaney has frosted the glass of his office windows so nobody can see that he’s doing nothing inside.

In testimony to Congress this week, Mulvaney absurdly tried to take credit for returning $92 million to consumers, even though this involved only cases that existed before he got there. He also tried to claim that Cordray didn’t start any enforcement actions in his first six months as director, which is a flat-out lie.

What we have here is repeal by neglect. It matters little that CFPB has regulations on the books if they’re not enforced. Mulvaney is surely working to remove those regulations—starting with rules just finalized on payday lenders—but that takes time. Chilling enforcement can happen right away, and it has. There are suddenly rumors that Mulvaney will issue a “record fine” for Wells Fargo’s crime spree against mortgage and auto-insurance holders, but that’s all they are at this point—-rumors that appear cynically timed to blunt this growing abandonment of people ripped off by their lenders. “Regulation by enforcement is done, we’re not doing it anymore,” Mulvaney said, going to bat for banks who apparently should be held innocent if they break the law but pretend not to know about it after the fact.

Mulvaney’s semi-annual report to Congress restated his belief that CFPB “will continue to execute the law, but will no longer go beyond its statutory mandate.” It never did before, of course, unless you equate “pushing the envelope” with protecting consumers in whatever way possible. He also warned of the dark dangers of consumer-data breaches from CFPB’s collection, playing upon fears of Facebook and Equifax. But CFPB data is anonymized; no personalized indicator is attached to CFPB’s data. And the macro collection is vital to spot problems in financial markets. The entire warning about data is a lie, a ploy to keep regulators in the dark.

The semi-annual report was also a sophisticated form of lobbying. Mulvaney took the obligation to testify as an opportunity to pitch Congress on removing authority from the agency he leads. He endorsed funding the bureau, unlike fellow banking regulators, through congressional appropriations, a transparent way to strangle it through defunding; requiring legislative approval of major rules, which Congress already has (and has already used) through the Congressional Review Act; changing the structure of the agency to have it report to the president; and creating an independent inspector general for the bureau, which it already has through the Federal Reserve. He threw in a bid for making CFPB leadership a bipartisan commission, a divide-and-conquer strategy to give industry lobbyists several opportunities to water down the mission.

Senator Elizabeth Warren put into relief what this all means in actual practice. She listed numerous actions that returned hundreds of millions of dollars to credit-card customers cheated by banks, students scammed by predatory loans, military members put into shady car-loan agreements, and even 9/11 first responders scammed out of tax money. None of these victims would have seen any restitution without CFPB, and when Mulvaney tried to protest that other agencies would have had jurisdiction, Warren made the obvious point that they didn’t use their authority. “You’ve taken obvious joy in how upset [dismantling the CFPB] must make me,” Warren said. “But this isn’t about me, this is about first responders and seniors and families who need someone one their side. You are hurting real people to score cheap political points.”

To emphasize the alleged unaccountable power of the agency, Mulvaney boasted that he could “sit here and twiddle my thumbs while you all ask questions.” It’s a bit strange to say this during a statutorily mandated semi-annual report to Congress. Mulvaney’s point is that there’s no mechanism for removing him from his position, although the dereliction he claimed as his right represents exactly the sort of for-cause action that could trigger such a removal by the president.

It’s also funny to hear Mulvaney talk about the power of the director seat, since there’s a hearing today about whether he was put into it illegally. A three-judge panel in the US Court of Appeals for the DC Circuit is hearing arguments on whether Donald Trump violated the law by installing Mulvaney in the position on a “temporary” basis (now going on five months with no end in sight, and no nominee to replace him even named), when the statute says specifically that the deputy director should serve on an acting basis in the absence of the director. That original provision, which Trump ignored, was designed to maintain the check and balance in a president’s only being able to choose a director who gets confirmed by the Senate. As Brianne Gorod added an op-ed this week, while the statute calls for an independent director, “Mulvaney could not be farther from independent: he currently serves as director of an agency located within the Executive Office of the President.”

All that being said, I kind of hope Mulvaney stays put. This may sound ludicrous given everything I’ve written. But nobody Donald Trump picks to lead a consumer-protection agency is going to do anything to protect consumers. His handpicked chair of the Office of the Comptroller of the Currency, the top national banking regulator, literally opened remarks with “I like bankers” at an industry conference, and his other appointees are busily knocking down regulations on the biggest banks. There’s a theory that Republicans couldn’t actually confirm anyone as hard-line as Mulvaney, but the Senate Republican caucus is pretty united against CFPB, so I’m not sure that’s true. If Leandra English, Cordray’s deputy, is restored as the rightful acting director by the courts, you can bet Trump will nominate someone and Republicans will confirm them right quick, as long as they control the Senate.

The timing here is important. A confirmed CFPB director serves a five-year term, regardless of who’s in the White House. This isn’t abnormal; Republican Sheila Bair served as FDIC chair under Obama, and Cordray for a time under Trump. But if there’s no confirmed director, and Mulvaney just stays in a caretaker role, he would have to go should Trump lose in 2020. A confirmed director could serve until April 2023 if they were confirmed today. That was in many ways the point of installing Mulvaney, to extend the process and ensure that an an anti-regulatory zealot is in charge for as long as possible, with or without Trump as president. So a longer tenure for Mulvaney could paradoxically lead to a shorter tenure for an internal saboteur at CFPB. Or BCFP. Or whatever.