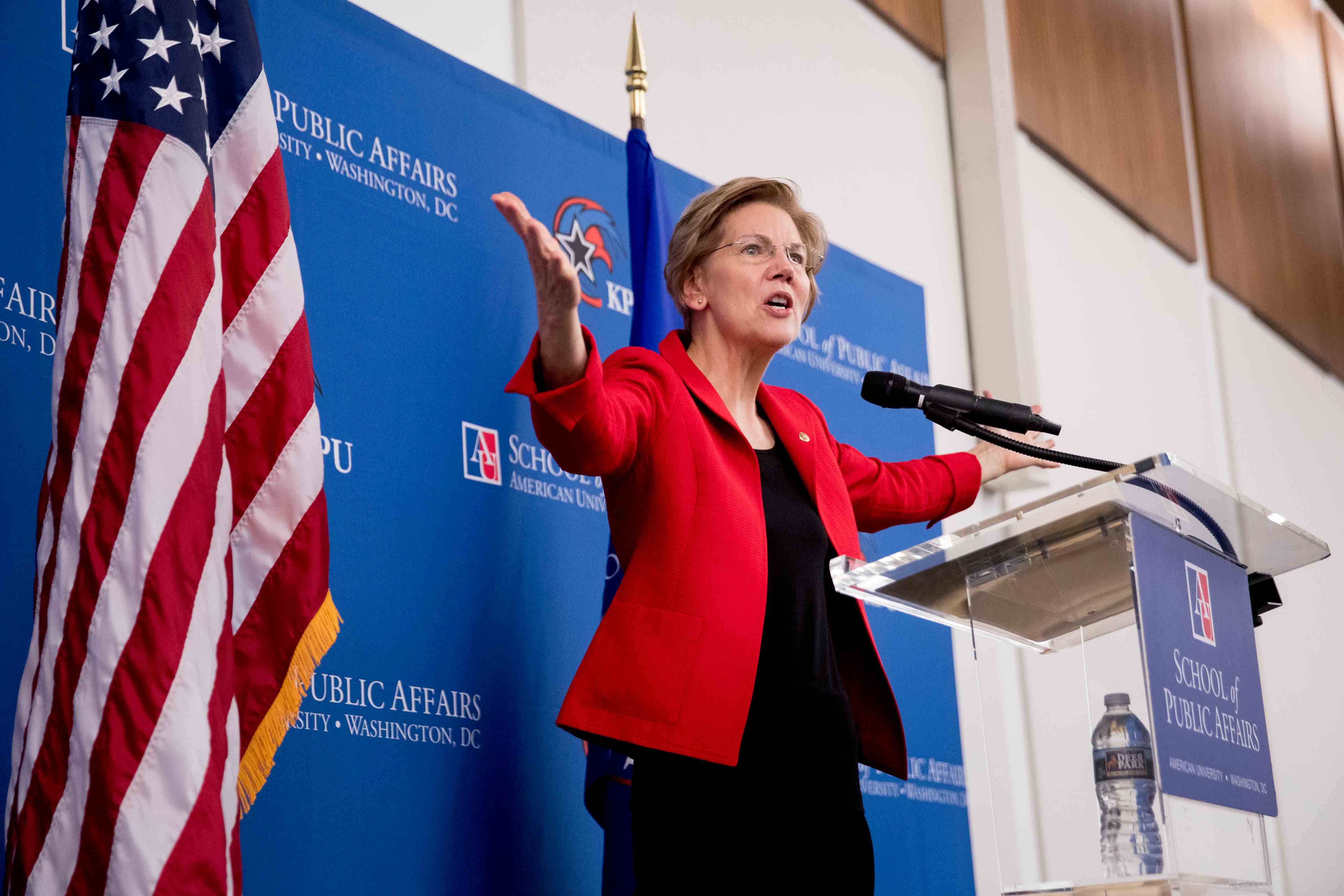 Americans who seek an enlightened alternative to the crudely nationalist and frequently antidemocratic ideology of Trumpism, and to a broader misdirection of US foreign policy that began long before the current president took office, got it this week from Elizabeth Warren.

She delivered a striking rebuke to the president and his policies in a speech that many saw as framing the outlines of a 2020 Democratic challenge to Trump. But the speech was about more than political positioning. What Warren said challenged not just the awful turn that Republicans have taken under Trump but the failures of her own Democratic Party.

“Our country is in a moment of crisis decades in the making, a moment in which America’s middle class has been hollowed out, working people have been betrayed, and democracy itself is under threat,” Warren told an audience at American University on Thursday. “While it is easy to blame President Trump for our problems, the truth is that our challenges began long before him. And without serious reforms, they are just as likely to outlast him.”

To counter the drift of the United States and its best ideals, Warren is proposing to break the grip of billionaire campaign donors and corporate interests on American policy-making. “We need to refocus our international economic policies so that they benefit all Americans, not just wealthy elites,” the senator argued. “At the same time, we must refocus our security policies by reining in unsustainable and ill-advised military commitments and adapt our strategies overseas for the new challenges we’ll face in this coming century. And we need to end the fiction that our domestic and foreign policies are somehow separate, and recognize that policies that undermine working families in this country, also erode America’s strength in the world.”

“In other words,” she concluded, “it’s time to create a foreign policy that works for all Americans, not just the rich and powerful. Authoritarianism is on the move around the world, there is no time to waste.”

This is the proper beginning point for anyone who would open the debate that the United States needs to have at this precise moment in its history. But the only way to do this is to recognize a longer historical arc that goes back to the days when Franklin Roosevelt spoke “a world founded upon four essential human freedoms” (freedom of speech, freedom to worship, freedom from want, freedom from fear) and Henry Wallace framed World War II as “a fight between a slave world and a free world” that would usher in “the century of the common man.”

Warren recognized that history, telling her audience in Washington, “There’s a story we tell as Americans, about how we built an international order — one based on democracy, human rights, and improving economic standards of living for everyone. It wasn’t perfect — we weren’t perfect — but our foreign policy benefited a lot of people around the world.”

“It’s a good story, with long roots,” she explained. “But in recent decades, something changed:

Beginning in the 1980’s, Washington’s focus shifted from policies that benefit everyone to policies that benefit a handful of elites, both here at home and around the world. Mistakes piled on mistakes. Reckless, endless wars in the Middle East. Trade deals rammed through with callous disregard for our working people. Extraordinary expansion of risk in the global financial system. Why? Mostly to serve the interests of big corporations while ignoring the interests of American workers. Add in decades of domestic policies that have helped the rich get richer and left everyone else behind, and it’s no wonder Americans have less faith in democratic government today than at any other time in modern U.S. history.

Warren’s critique is an appropriately unsparing one. Rejecting Trump’s latest attempt to rewrite the North American Free Trade Agreement, she warned that “it won’t stop outsourcing, it won’t raise wages, and it won’t create jobs. It’s NAFTA 2.0.” But the senator refused to get lost in the minutiae of the moment. She focused on the deeper crisis.

“US trade policy has delivered one punch in the gut after another to workers and to the unions that fight for them,” said Warren. “For decades, the leaders of both parties preached the gospel that free trade was a rising tide that would lift all boats. Great rhetoric — except that the trade deals they negotiated mainly lifted the yachts — and threw millions of working Americans overboard to drown.”

Then she went deeper still, arguing that the post–Cold War consensus, with its blend of corporate-friendly neoconservative and neoliberal fantasy, has failed the people of the United States and the world. In the most vital section of one of the most important addresses she has delivered as a senator and a presidential prospect, Warren explained that

Washington had it all figured out. And this confidence spilled over into more than trade deals. Champions of cutthroat capitalism pushed former Soviet states to privatize as quickly as possible, despite the risk of corruption. They looked the other way as China manipulated its currency to advance its own interests and undercut work done here in America. Washington technocrats backed austerity, deregulation, and privatization around the world. As one crisis after another hit, the economic security of working people around the globe was destroyed, reducing public faith in both capitalism and democracy.

Policymakers promised that open markets would lead to open societies. Wow. Did Washington get that one wrong. Efforts to bring capitalism to the global stage unwittingly helped create the conditions for anti-democratic countries to rise up and lash out. Russia has become belligerent and resurgent. China has weaponized its economy without loosening its domestic political constraints. And over time, in country after country, faith in both capitalism and democracy has eroded. A program once aimed at promoting the forces of freedom ended up empowering the opposite.

There is more truth in those few paragraphs than in most of what has been said by political leaders of both parties in recent years—as there is in Warren’s call for dialing back military adventurism, cutting “our bloated defense budget” and “reinvesting in diplomacy.”

But the greatest truth the senator spoke came when she warned that a “combination of authoritarianism and corrupt capitalism is a fundamental threat to democracy, both here in the United States and around the world. It is a threat because economic corruption knows no borders — and in a global economy, corruption can provide a strategic advantage. It is a threat because corrupt leaders enhance their own power by subverting the power of everyone else — and so they actively undermine free and open societies through cyber-attacks, disinformation campaigns, or support for illiberal politicians.”

“If free societies like ours slide toward corruption and autocracy,” said Warren, “they risk becoming democracies in name only.”

Should Elizabeth Warren challenge Trump in 2020 with an agenda grounded in this vision, hers will be a crucial candidacy.