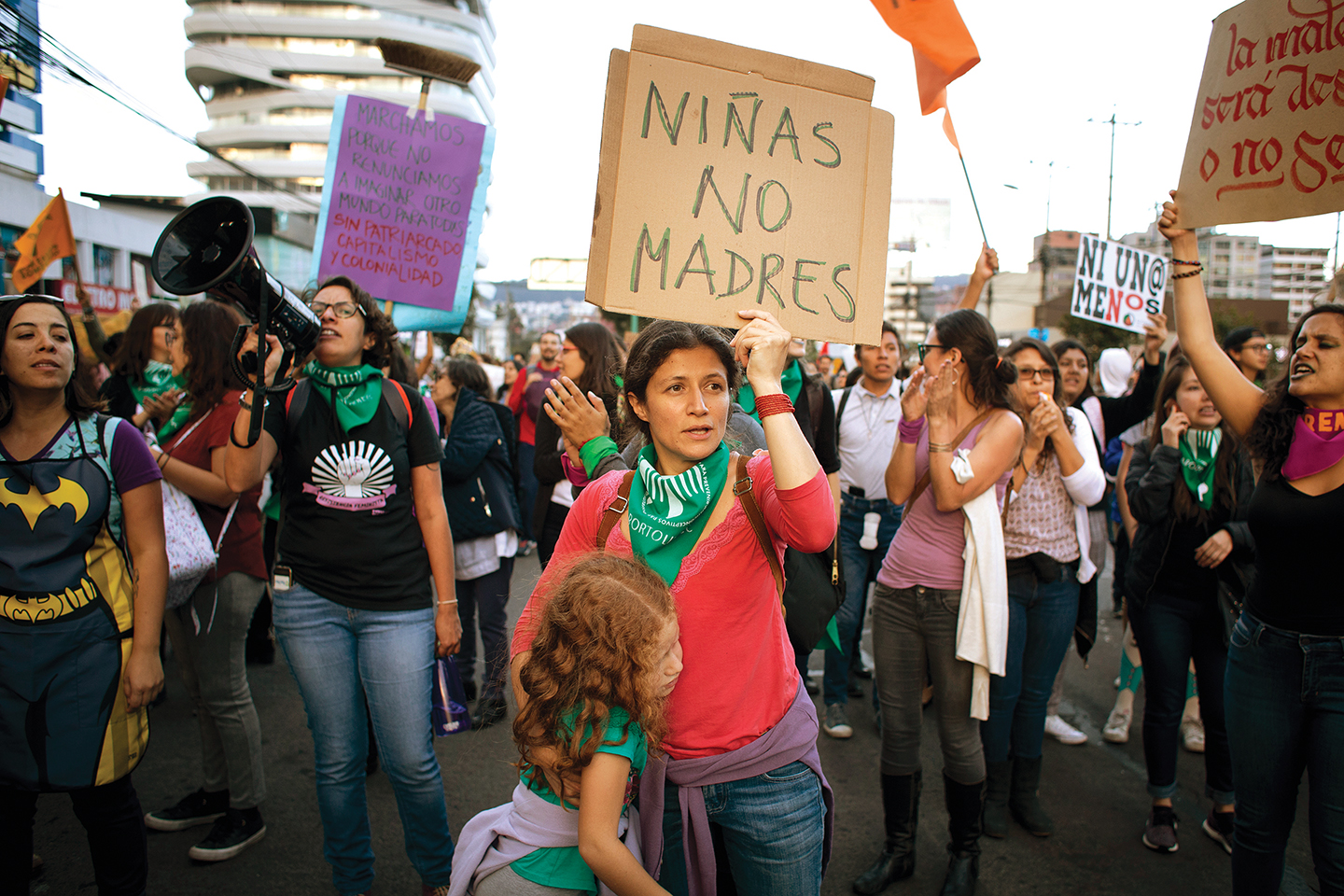 In Ecuador, supporters of a proposed reform to the country’s abortion laws rallied around the slogan “Niñas no madres” (girls not mothers). (Dominique Riofrío)

One of the most significant stories of the last decade in Latin America was the flourishing of a regional, grassroots feminist movement that put gender politics at the center of public debate. The mobilization emerged first in response to staggering rates of femicide and other forms of gender violence, and then mounted challenges to the region’s abortion laws, which are among the world’s most restrictive. Beginning in Argentina and spreading to Chile, Ecuador, Mexico, and elsewhere, the movement washed the region in green—green for the bandanas that activists wore around their necks, or tied to their backpacks, or hung on their walls; emerald symbols of solidarity, or as one Argentine described them, a “badge of dissent.”

The story of the “green wave” does not end with the decade. Despite some concrete victories—including, in September, the partial decriminalization of abortion in the Mexican state of Oaxaca—many of its legislative goals remain unrealized, and feminist activists across the region are now facing a right-wing political backlash. In Ecuador, where I reported this year on an escalation of abortion-related prosecutions, a protracted political battle over the decriminalization of abortion in cases of rape is ongoing. Currently, the country’s laws permit abortion only when a woman’s health is endangered or if a rape victim is mentally disabled. Nevertheless, clandestine procedures occur frequently. Doctors often report women exhibiting signs of abortion or miscarriage to the police, and prosecutors have initiated more than 370 abortion-related cases since 2015, sending numerous women to prison. In addition to imprisonment and deaths related to unsafe illegal procedures, Ecuador’s abortion ban, combined with endemic sexual violence, has effectively forced thousands of adolescent girls to become mothers. On average, seven girls under the age of 14 (Ecuador’s age of consent) give birth there every day.

Ecuador’s Crackdown on Abortion Is Putting Women in Jail

For more than a decade, pro-choice advocates have called for the addition of a full rape exception to the abortion ban. Representatives in Ecuador’s National Assembly had a chance to do so this year, when they debated reforms to the criminal code. Supporters of the reform rallied around the slogan “Niñas no madres” (girls not mothers); opposition, meanwhile, was led by Catholic and evangelical organizations. A vote on the measure was repeatedly delayed, and when it was finally held in September, a handful of lawmakers were absent. The reform failed by five votes. After, police used pepper spray to scatter demonstrators gathered outside the Assembly building in Quito.

“The feeling we have is bittersweet,” Virginia Gómez, the president of the Ecuadorian reproductive health organization Fundación Desafío, said recently. This was the second time the rape exception came close to passing. In 2013, the measure appeared to have enough supporters in the Assembly but was squashed by then-President Rafael Correa on the eve of the vote. This year, Gómez said, the National Assembly “did not have the courage” to defy religious institutions. Gómez and other advocates are now hoping for an intervention from Ecuador’s Constitutional Court, which announced in November that it will consider a complaint filed by organizations including Fundación Desafío, arguing that the absence of a rape exception violates women’s constitutional rights.

Until recently the impact of Ecuador’s abortion ban received relatively little international scrutiny in comparison to countries where abortion is even more restricted, such as El Salvador. But in December, the United Nations Special Rapporteur on violence against women issued a preliminary report describing “alarmingly common” and “deeply rooted” violence against women and children in Ecuador, and arguing that the country’s restrictions on abortion “place young girls…at extreme risk.”

“Systemic sexual violence paired with minimal access to sexual and reproductive health services means that women and girls are frequently forced to carry unwanted pregnancies to term,” Dubravka Šimonović wrote. Her recommendations include the decriminalization of abortion and, in the interim, “a moratorium on the application of criminal laws concerning abortion…and all related arrests, investigations and criminal prosecutions ceased, including of women seeking post-abortion care and healthcare professionals.” She also called for a review of the cases of women currently imprisoned on abortion-related charges, and for their release.

Ecuador is now also subject to at least two international legal complaints related to violence against women and restrictions on reproductive rights. In late May, seven international and national organizations, including the Center for Reproductive Rights (CRR) and Surkuna, an Ecuadorian legal group, filed a lawsuit with the United Nations Human Rights Committee against Ecuador, Nicaragua, and Guatemala on behalf of four girls under the age of 14 who were raped and forced to carry pregnancies to term. Catalina Martínez Coral, the CRR’s regional director for Latin America and the Caribbean, said in an interview that the goal of the litigation is to obtain reparations for the plaintiffs, to encourage legal change in those countries, and to expose the structural and systematic nature of sexual abuse and forced pregnancy across the region.

“Because of the lack of access to reproductive care, none of these girls could access abortion or other any kind of reproductive health care…. They didn’t find justice, their cases were closed, the perpetrators weren’t processed,” said Martínez. “We are asking the Human Rights Committee to create very strong standards around access to sexual and reproductive health for girls and adolescents.”

While the UNHRC’s decisions are not binding, they can provoke policy change. An example is the first abortion case it decided, which involved a teen in Peru whom doctors advised to terminate a high-risk pregnancy because the fetus was unlikely to survive. Although Peru permits abortion if a pregnancy is expected to cause serious harm, the woman encountered administrative barriers and was forced to give birth to a baby who died four days later. The UNHRC ruled that the Peruvian government violated several articles of the International Covenant on Civil and Political Rights, and asked Peru to create a protocol for making legal abortion accessible. It did so with assistance from the CRR. “This was a country accepting a decision from the Human Rights Committee to change policy,” Martínez said. “Now the challenge in Peru is the implementation.” 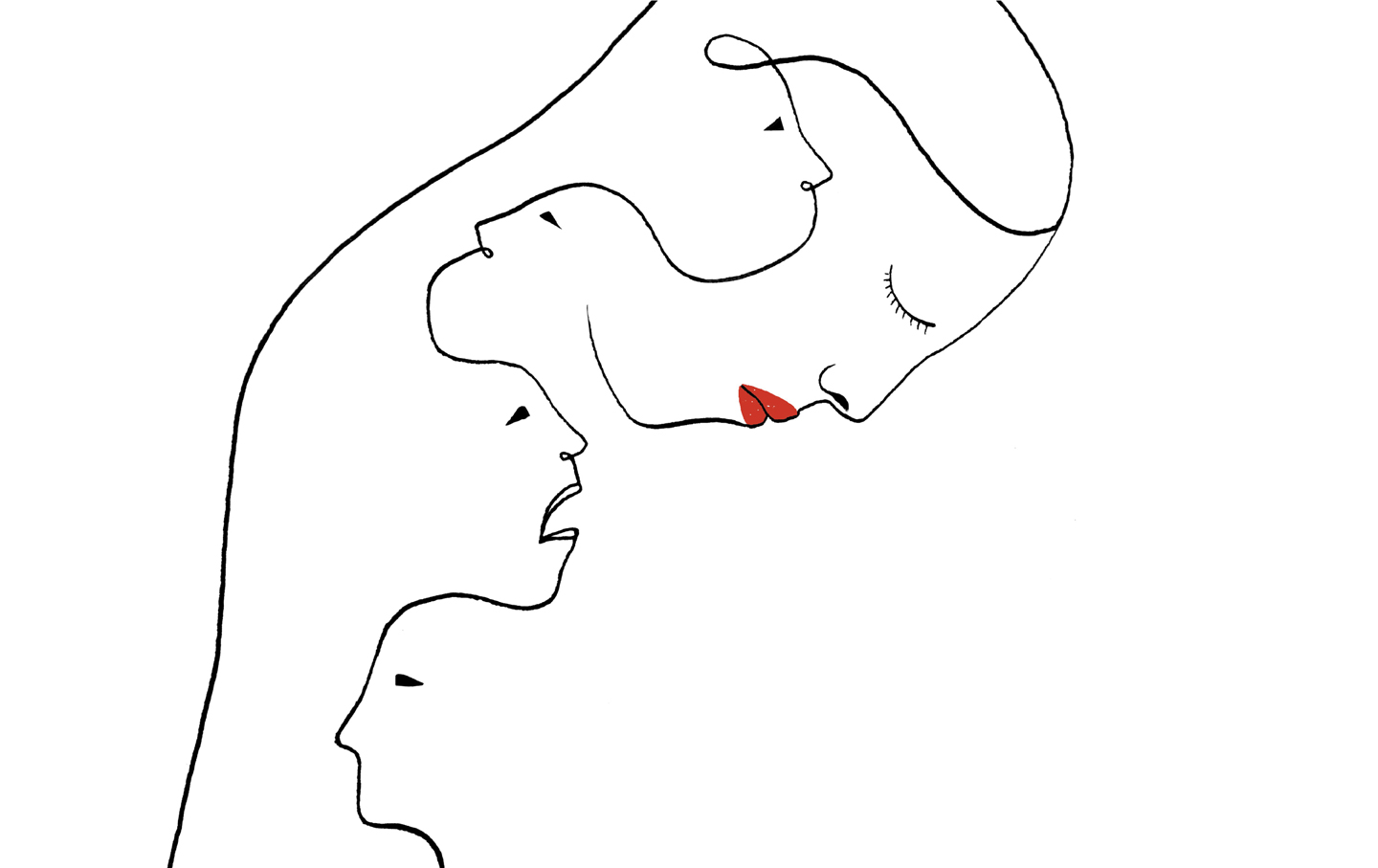 When Abortion After Rape Is Legal—but Nearly Impossible to Obtain

Another case pending against Ecuador, this time before the Inter-American Court of Human Rights, was filed on behalf of the family of Paola del Rosario Guzmán Albarracín, an adolescent who was sexually abused by two public school employees—a vice principal and a doctor—before dying by suicide at 16. The suit asserts that the state had a responsibility to prevent the abuse and that it violated her rights to life, dignity, equality, nondiscrimination, and education, among others. “This case is going to be very important,” said Martínez. “It’s the first case around sexual violence in education institutions to arrive before the [Inter-American] Court,” whose decisions are binding. “It’s very important to create standards for capacity and consent for educational institutions.”

While growing feminist coalitions and heightened attention from international organizations are putting pressure on governments in Central and South America to reconsider severe abortion restrictions and take seriously the problem of gender violence, the rise of right-wing religious and political leaders throughout the region presents a powerful counter-current. Conservative leaders opposed to abortion rights are now in power in Brazil, Colombia, and Bolivia; last year Chile’s conservative government gave hospitals wider latitude to refuse to perform legal abortions for religious reasons. As the Argentine writer Claudia Piñeiro described recently, this political climate not only makes the work of expanding rights more challenging: it also discourages women from exercising rights that already exist, at least on paper. Girls and women in Argentina, Mexico, and other countries that do permit abortion in cases of rape, for instance, are routinely denied care by medical providers, judges, or other authorities.

Misogyny is not owned by the right: A number of leftist leaders in Latin America have historically been hostile to women’s rights, and so feminists expect that continued mobilization will be necessary regardless of who is in power. A revived abortion decriminalization effort is underway in Argentina, after a previous attempt failed narrowly in 2018; Mexico’s governing party recently announced that it would present a federal measure to legalize abortion early in pregnancy. “We are not in any way sure that the situation is going to end in favor of women,” said Gomez. “Anything that we have achieved has been because of the struggle, of the constancy, and the pressure.”