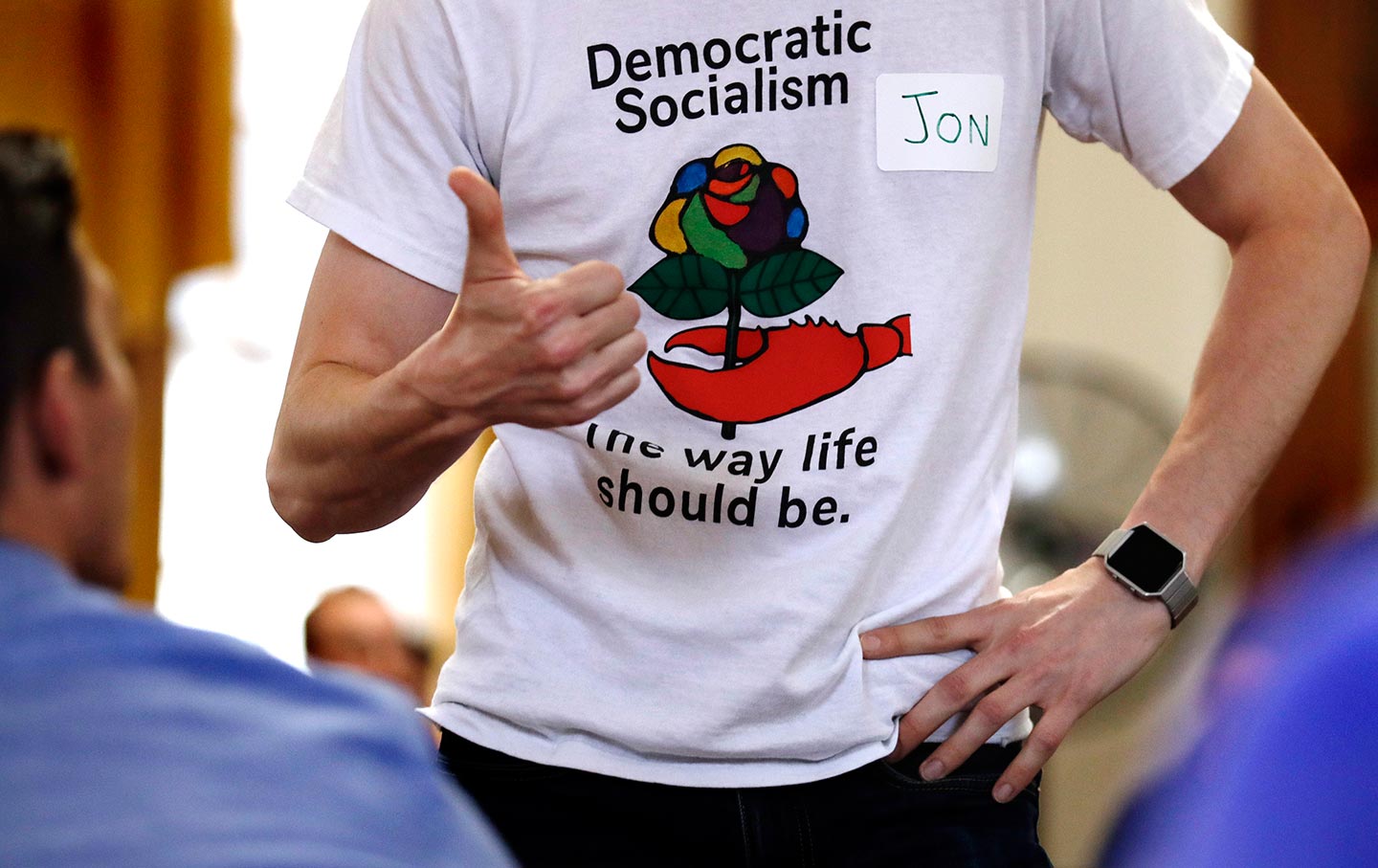 Since Alexandria Ocasio-Cortez’s surprise primary victory late last month, there has been a renewed interest in the Democratic Socialists of America. Outlets have run pieces exploring the group and its positions, and thousands have signed up to join its ranks. Across the country, DSA-endorsed candidates like Julia Salazar are challenging the status quo of party-backed incumbency. Even Cynthia Nixon has embraced the socialist label.

This has also been a banner year for high-school organizing, from the students in Parkland, Florida, taking on the NRA to the high schoolers organizing against Chicago’s $95 million police academy. High-school students’ getting involved in organizing and activism is nothing new, but some students are taking their resistance even further—they’re calling themselves socialists. Like Ocasio-Cortez, Salazar and thousands of people across the country who have joined DSA, these students are committing themselves to a politics that imagines a world where everyone can live comfortably with access to free education and health care, where no one lives in fear of immigration agents or police, and where poverty has been eradicated.

Decades ago, a generation of students learned to fear the specter of communism as public schools bore a purge of teachers at the Cold War’s height. Now, in high schools across the country, teens are not only joining the Democratic Socialists of America, they’re starting up chapters in their schools.

A large part of the DSA’s surge in membership can be attributed to young people—70 to 80 percent of the 24,000 who have joined DSA since November 2016 are under 35. According to Michelle Fisher, co-chair of DSA’s youth wing, Young Democratic Socialists of America, some of this new membership is still in high school: There are four official chartered chapters of the YDSA in high schools across America. Since Ocasio-Cortez’s win, Fisher says, members from 21 different high schools have expressed interest in organizing chapters at their schools.

The 2016 presidential election was many high-school socialists’ political turning point; it certainly was the case for 17-year-old Josh Kuh, a junior at Garfield High School in Seattle who discovered DSA in late October 2016. “I was realizing that in order to fight against the possibility, and then the reality of a Trump presidency, there needed to be grassroots opposition from outside the Democratic Party,” he said. He has since been organizing a YDSA chapter at his high school that has been meeting since this past October.

Kuh went on to work for the campaign of Jon Grant, a Seattle DSA member who ran for city council. Also working on the campaign were members of Seattle’s Ballard High School YDSA, including junior Laura Couch. Couch, 16, said she began organizing with her high-school chapter over the summer. One of their first actions as a group was to join a counter-protest to an alt-right event. She said that in the moment, they felt like revolutionaries. But when some of the protesters began to throw confetti and spray Silly String at the cops, officers shot the crowd with pepper spray. “Overall, it was a great bonding experience that brought us all together,” she said.

Today, members of the Ballard chapter have organized fundraising drives to cover student-lunch debt and campaigned for the school board to seek consultation from student groups. High-school socialists are championing similar causes across the country. In Texas, students are calling their senators about net neutrality. In Illinois, they’re registering voters—despite most members’ being unable to vote yet themselves. Education is also a key part of YDSA’s outreach work, with a lot of time spent dispelling myths and inviting friends and classmates to talk about socialism. High-school socialists are frequently teaming up with their schools’ Gay Straight Alliances, Black Student Unions, and other groups to ensure that the school serves as a safe space for all students. “Other political groups at our school have predominantly white memberships,” Kuh said. “We want to make our YDSA chapter accessible and open to people of all backgrounds, as any socialist organizing space should be.”

Many of the high-school organizers I spoke to said anywhere from 15 to 30 students attend meetings or are otherwise involved in their chapter. This might be expected in a liberal enclave like Seattle, but YDSA chapters are popping up in high schools in the middle of deeply conservative states. Ash Stocklin, a 17-year-old senior at Jack C. Hays High School in Buda, Texas, said that living in an overtly conservative area hasn’t stopped his peers from showing marked interest in YDSA. “At our school, although in a smaller town in Texas known to have students donning the confederate flag, most students have been supportive,” he said. “We’ve seen new members of all grade levels [showing] interest or regularly attending meetings.”

At Jack C. Hays High School, students from the YDSA chapter joined students across the country for a walkout on April 20 against gun violence. According to Stocklin, students wrote and gave speeches, while others made posters and distributed information on how to register to vote. The Hays chapter is currently in talks with the administration to get biodegradable food trays in the cafeteria and has begun discussions on creating a gender-neutral bathroom.

Similar support can be found at Canyon High School, located just outside San Antonio in New Braunfels, Texas. According to 18-year-old organizer Jacob Dussere, about 15 to 20 people show up for the weekly meetings. And while they’ve faced hostility—Dussere said their posters in the hallways are frequently torn down—the response has been mostly positive. In fact, according to fellow organizer and senior Nick Hancock, also 18, the chapter membership currently outnumbers the school’s Young Conservatives Club.

Jackson Wolek, who teaches AP US History at Canyon, said that students take what they learn from the classroom into their after-school activities. He said a student e-mailed him last May to say that his lectures had made her interested in the history of politics, which had prompted her to organize fellow students to form the school’s chapter. Soon enough, when the YDSA chapter was founded in September of that year, Wolek began serving as faculty sponsor.

Despite supportive teachers and interest from fellow students, student organizers still face hurdles—often from squeamish school administrators. For Selma El-Badawi, a 17-year-old senior at Downers Grove North High School in Downers Grove, Illinois, the setbacks only made the need for a YDSA chapter even more clear. El-Badawi had been involved in the school’s Gay Straight Alliance for three years prior to launching her school’s YDSA. In that time, the school’s GSA achieved significant victories, managing to successfully lobby for the school’s first gender-neutral bathrooms and other considerations. Over time, the group began to take broader direct action, organizing groups to attend local protests and marches. “We held letter-writing parties to our representatives,” El-Badawi said.

Things changed when the school’s first gender-neutral bathrooms were introduced in the spring of 2016. Before, transgender and non-binary students had to use the restroom in the nurse’s office, something the school’s Gay Straight Alliance discussed with administrators when they lobbied for better access to gender-neutral bathrooms throughout the school. But after an anonymous student informed a local conservative blog about the reason for the new bathrooms, school officials changed their tone. The district began to refer to the bathrooms as “single occupancy” instead of gender-neutral and denied that the changes were being made for transgender and non-binary students. The work that the GSA did to launch the initiative was never explicitly mentioned in the wake of the new bathrooms; instead, the district referred vaguely to its “work with students.”

Having their contributions erased after they worked hard to get the bathrooms established was a discouraging blow to the students, El-Badawi said. “It felt like we wouldn’t be able to create future change under the guise of our GSA if we were going to have our contributions ignored,” she said. Soon after, the principal told the GSA’s faculty sponsors that the club would have to take a less political route going forward. Not wanting to jeopardize its existence as a club, the group felt pressured to comply, which brought on a lull in progressive student activism altogether. But when the school granted the conservative student group Young America’s Foundation permission to start an overtly political club in May of last year, El-Badawi saw student activists’ chance. She filled out the necessary paperwork to create a YDSA chapter, which has revived progressive organizing at Downers Grove North High School.

This generation of young socialists is growing up under the backdrop of the largest economic downturn since the Great Depression. Students have seen their job prospects dwindle, future incomes drop, and nothing being done to stymie the rampant inequality they see—and they’re fed up. “I’ve never spent a waking moment comfortable in my financial situation,” Stocklin said.

“I am a socialist because of a profound desire to see and build a better world,” added Laura Couch, from Ballard High School. “When I was growing up, I saw my parents lose their jobs, and there were times where it was difficult to put food on the table.”

These facts, coupled with a strong belief in fairness, equality, and liberation for all, drive young people to become socialists. “The notion that some people should have more opportunities because of random wealth is simply absurd. Everyone should have the right to live and prosper,” El-Badawi said.

Back in January, at an event held by the Los Angeles Times, former vice president Joe Biden told the journalist Patt Morrison that “the younger generation now tells me how tough things are. Give me a break. No, no, I have no empathy for it. Give me a break.” He went on to lecture young people about getting involved, adding he was nostalgic for the days when his generation “decided we were gonna change the world.”

Democrats like Joe Biden might interpret young people’s disinterest in the Democratic Party as apathy—but perhaps, instead, youth are rejecting the subpar choices they’ve been presented. Perhaps they have the audacity to demand more.

“I believe that this generation has the power to dramatically change the world. The struggles for liberation that were once controversies are being embraced, and the ideas of radicals are taking hold,” Couch said. “As many adults activists looking over our chapter have said: The kids are all right.”