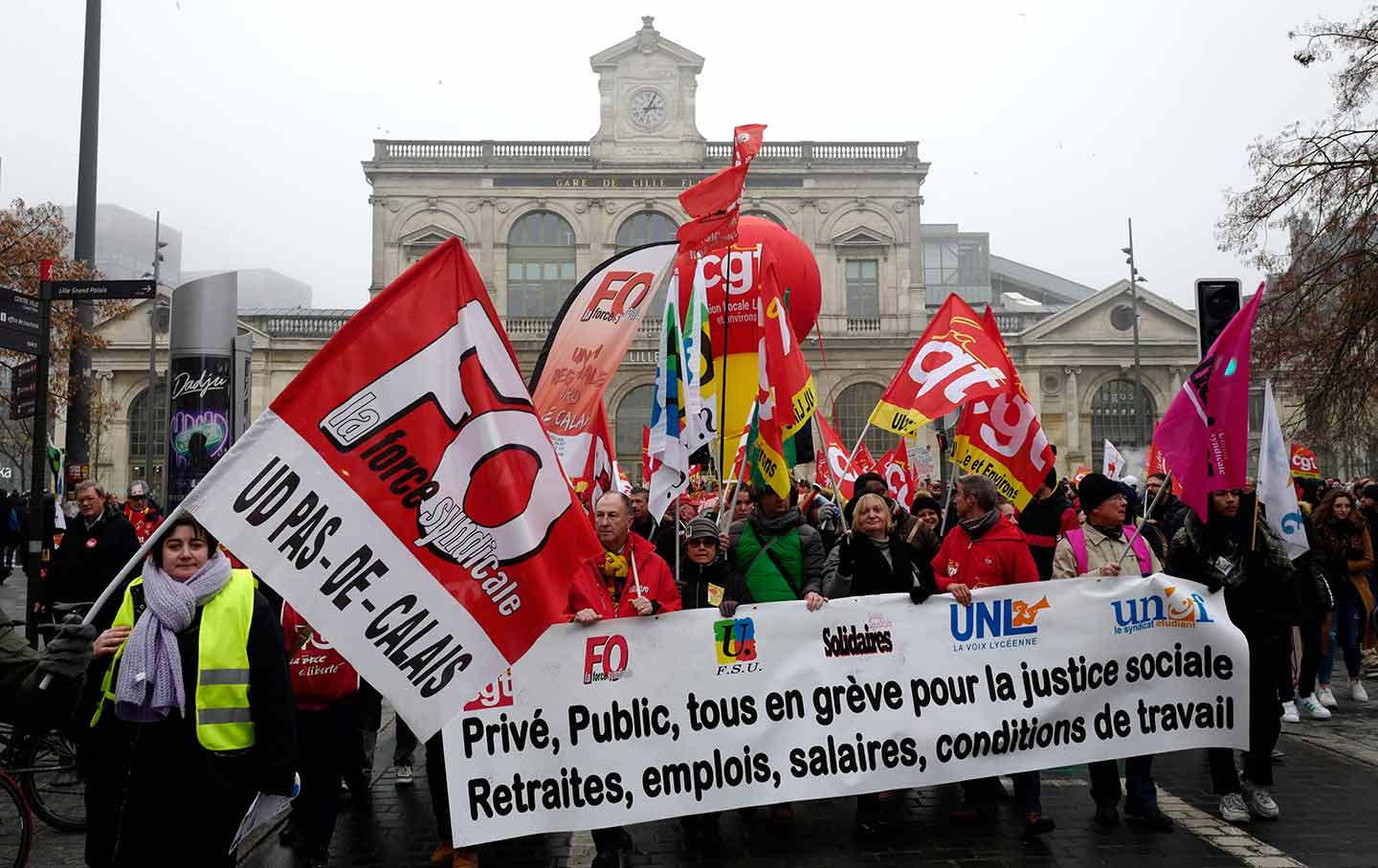 After a year of protests that dragged his popularity to record lows and forced significant concessions from his government, French President Emmanuel Macron might have thought twice before staking “Act Two” of his presidency on a well-established political minefield. But that would have been out of character for the famously high-handed leader. Undeterred by either the Yellow Vests or the massive strikes that confronted his predecessors, the self-styled “Jupiterian” president and his government are coming after one of the social goods the French hold most dear: their pensions.

Sure enough, it’s not going over too well. On Thursday, according to the Interior Ministry, more than 800,000 people (1.5 million according to unions) took to the streets across France as part of the largest strike movement the country has seen in nearly a decade. National rail and Paris public transit are all but shut down through the weekend, with nine of 10 high-speed trains canceled, seven of 10 trains canceled on regional lines, and only two of Paris’s 16 metro lines running normally. More than half of teachers walked out nationwide Thursday, a record since 2003.

“We have a government that’s trying to swindle us out of what the French people have won through struggle and strikes” over decades, says Sylvie, an aide at a public hospital just outside of Paris and member of the left-wing union group Solidaires Unitaires Démocratiques. Hers is the sentiment driving the historic mobilization, which goes much deeper than pension reforms: Organizers hope to form a “wall” against Macron’s neoliberal agenda, borrowing a phrase from one of Macron’s own advisers.

That wall hasn’t been built overnight, but it has been taking shape, brick by brick, since Macron took office in mid-2017. And over the past year, it’s become increasingly cemented, not just by the Yellow Vests but also by regular marches and walkouts from teachers, students, feminists, climate activists, and health care workers. Emergency room personnel and other hospital staff like Sylvie have been on the front lines since March, leading a symbolic strike against what they describe as a life-threatening lack of resources. Over the last eight months, their movement has spread from Paris to roughly half of all French emergency rooms, fueling wider outrage over cuts to public services.

Still, Thursday marked a watershed. Turnout dwarfed that of the first and largest day of Yellow Vest protests in late 2018 (which drew roughly 282,000 people) and the climate marches this spring (145,000–350,000), as well as the huge 2016 strikes against labor law reforms. The last time this many people took to the streets in France was in 2010, against—you guessed it—pension reforms. That year’s massive, months-long movement was not enough, however, to stop Nicolas Sarkozy’s right-wing government from raising the standard retirement age from 60 to 62.

The historical precedent today’s organizers hope to live up to goes back further, though, to 1995, when three weeks of strikes paralyzed public transit, drew millions into the streets, and ultimately blocked a plan that would have cut public-sector retirement benefits to the levels of private ones. This is essentially the challenge Macron has now brought upon himself as the priority for the second half of his presidential term. He appears determined to prove himself as the president who can “disrupt” the French welfare state as his predecessors could not—underlining a kind of arrogance that also helps explain the scale of the backlash.

Macron has never hidden his ambitions to overhaul France’s retirement system, which is really a complex system of systems. Workers in the private sector (just over 80 percent of the total) pay into a different retirement system than those in the public sector, and about a quarter of public-sector workers benefit from “special” schemes allowing them to retire earlier and typically with a higher pension than most of their counterparts. Chief among them are rail and utility workers (gas and electric), who can retire as much as five to 10 years before the standard age of 62.

Campaigning in 2017, Macron promised to replace this maze with a single, universal plan that he promised would be more “just and transparent.” The details of the plan remain up in the air, as ministers have announced and then walked back major components, ranging from a 5 percent pension cut for those who retire before age 64 (effectively increasing the standard age by two years) to a grandfather clause that would see the reform implemented only decades into the future. (The government has promised to unveil its official plan on Wednesday.) The bottom line is clear, though: French people are going to have to work longer, as Prime Minister Edouard Philippe has insisted. Why? The main reason is the budget. The French state spends more than nearly all of its fellow wealthy countries on its seniors: just under 14 percent of GDP, or double the US rate. For Macron’s government, this is unsustainable: The social security system, it says, could face a deficit of up to €17 billion by 2025, up from €5 billion this year.

Officials paint this as an inevitable result of an aging population, with the ratio of workers (who pay into the system) to retirees (who draw from it) decreasing—hence the urgent need for an overhaul.

This picture is misleading, though. The growing gap in the social security budget comes not from workers’ pension contributions, which are largely stable, but rather from a political decision to cut the state’s share of the budget. This, as always, is what the pension battle comes down to: not a question of whether there’s enough money, but how that money is distributed.

To this day, the French have accepted to pay a relatively high price for the right to a dignified retirement. As Cole Stangler has pointed out in The Guardian, France has one of the lowest rates of old-age poverty in the world: 3.5 percent, compared to 23 percent for the United States. This helps explain why in a poll published last Sunday, 64 percent said they didn’t trust Macron’s pension reform plans, even though more than three-quarters felt the system was in need of updating.

As opposition to the reforms has mounted, Macron’s government has doubled down on its rhetoric, casting the strikes as the desperate attempt of a small clique of public-sector workers to cling to their unfair “privileges.” Régis, a 28-year-old organizer with Nos retraites (Our Pensions), a collective formed to oppose the reforms, calls this argument a “big joke.”

The government’s emphasis on a small group of public-sector workers with above-average retirement benefits—about 3 percent of the total workforce—is a “smokescreen” to distract from the fact that most people will face pension cuts from the reforms, he says. Two polls published on the eve of Thursday’s strike showed the public largely agrees, with about 60 percent in favor.

“Pension reform is very important, but this is about the larger picture,” said one rail worker, the conductor of a suburban Paris rail line who declined to give his name. The government “is beating up on the wrong people,” he says, and the attempt to scapegoat workers like himself has backfired. Will he and his coworkers stay on the picket lines long enough to force Macron to fold? With neither side showing any sign of relenting, one thing is clear: The battle is just getting started.