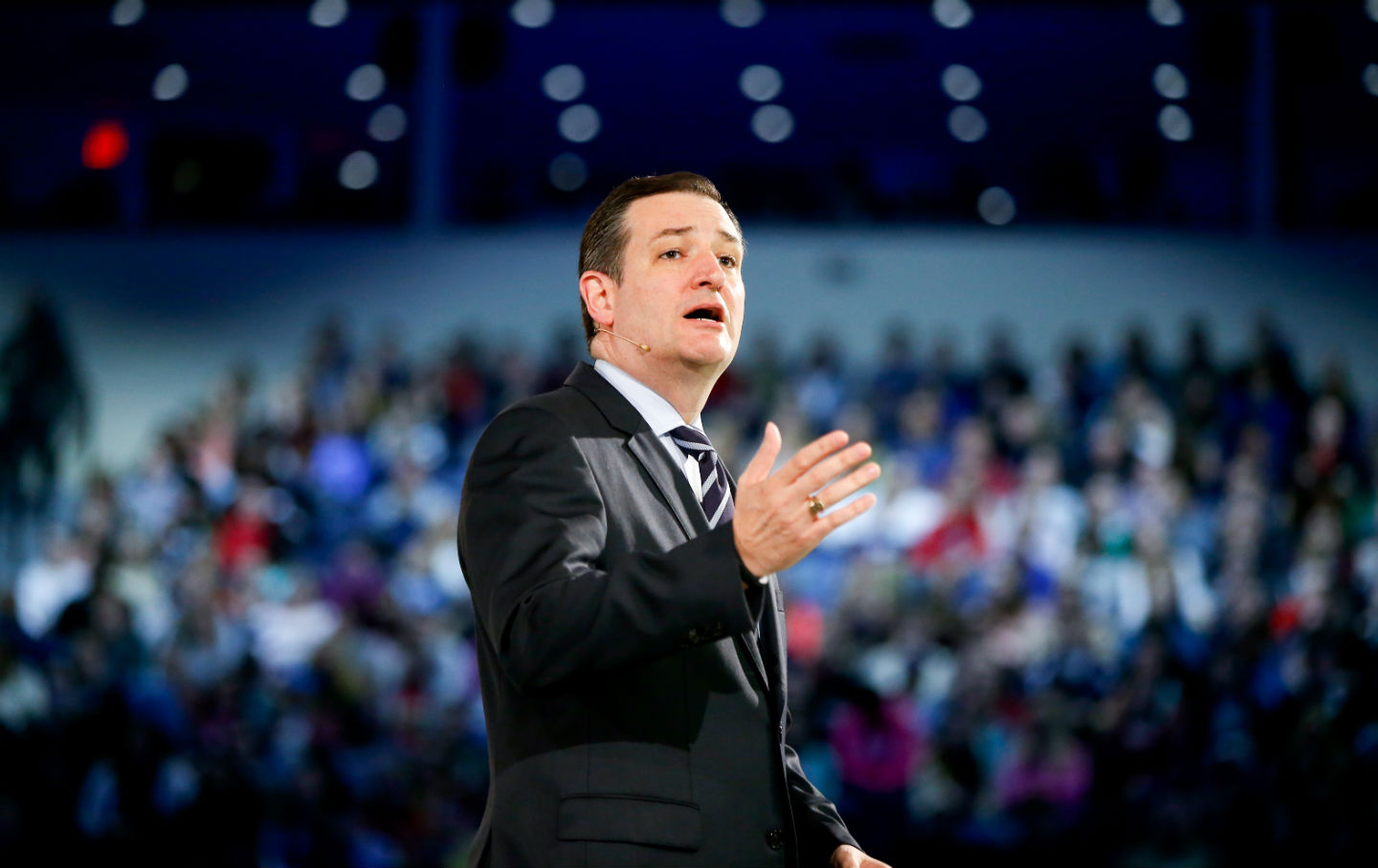 Iowa caucus winners who secure victory by galvanizing evangelicals and highly conservative voters don’t have the best track record thereafter, as both Mike Huckabee and Rick Santorum can attest.

So it might have been strange to see Senator Ted Cruz doubling down in his victory speech Tuesday in Des Moines by exhorting “to God be the glory.” He peppered Bible passages throughout his address, and continued to outline an uncompromising right-wing agenda.

But, as always, Cruz knows what he’s doing. The GOP primary calendar dictates that even if Cruz was inclined to moderate after Iowa—which given everything we know about him, and his ideological donors, he is not—the smart play for Cruz is to keep driving a hard sell to the conservative base of the GOP.

The real bounty of delegates for Cruz is on March 1, when the first multi-state voting day of the Republican primary is dominated by six Southern states: Alabama, Arkansas, Georgia, Tennessee, Texas, and Virginia. Oklahoma also votes that day, and Louisiana and Kentucky vote four days later.

The so-called SEC elections, named after the collegiate athletic Southeastern Conference, are a new feature. The GOP nominating process has typically placed very little emphasis on the Deep South—the Georgia secretary of state believes the last Republican candidate to attend his state’s convention was Barry Goldwater. But that changed last year when several Southern secretaries of state banded together and demanded a larger voice. They got it, and nearly one-quarter of all the GOP delegates are up for grabs on SEC primary day (595 of the 2,470).

This has been a fortuitous development for Cruz, whose highly religious and deeply conservative message is a perfect fit for the deep South. And he recognized it from the start. A senior Cruz strategist told National Review they only planned to win one of the first four contests (Iowa, New Hampshire, Nevada and South Carolina) and Cruz told a Koch donor summit last year that the SEC primary would be his “firewall.”

Late last summer, when most of his competitors were in Iowa or New Hampshire, Cruz was on a weeklong, 2,000-mile tour of the Deep South, delivering speeches on the flatbeds of pickup trucks, and he’s returned to the region frequently. Even as the Iowa caucus rapidly approached, Cruz held rallies in Trussville and Daphne, Alabama, in late December.

His home state of Texas has the biggest haul of delegates in the SEC primary (155), and Cruz held a five-point lead over Trump in the most recent poll. Trump bests Cruz elsewhere, like Tennessee, where a poll last week showed Trump with 32 percent to Cruz’s 16.5 percent.

But the second-place finisher was “don’t know” with 28 percent, and to get those voters Cruz will surely rely on the same formula that delivered him Iowa: organizing. Cruz has built up an impressive list of endorsements from Tea Party activists in the state and will once again rely on grassroots campaigning to churn out voters.

Cruz’s real goal in the SEC primary isn’t Trump, however—it’s to suffocate Senator Marco Rubio’s support. All but one of the states voting on March 1 have a provision that unless a candidate reaches a certain threshold (either 15 or 20 percent), he or she is awarded no delegates.

In other words, Cruz can try to run the table on Rubio and prevent him from picking up a single delegate in most of these states. This means Cruz is likely to further emphasize his conservative bona fides—he cleaned Rubio’s clock in Iowa on the question of which candidate shared voters’ values, and that remains Cruz’s biggest advantage going forward.

Moreover, this dynamic means Cruz needs to keep being nice to Trump, and all that Trumpism entails. Trump’s departure from the race, or a serious decline in his support, would almost surely send enough voters Rubio’s way to get him over the 20 percent mark in the SEC primary states. So Cruz needs Trump to remain competitive until then, while ultimately hoping to out-organize the mogul in the long run.

At some point Cruz may need to tone down his message, before later contests in delegate-rich and more moderate states like Ohio, Florida, Michigan, and Illinois. But it’s not a development you should expect any time soon.