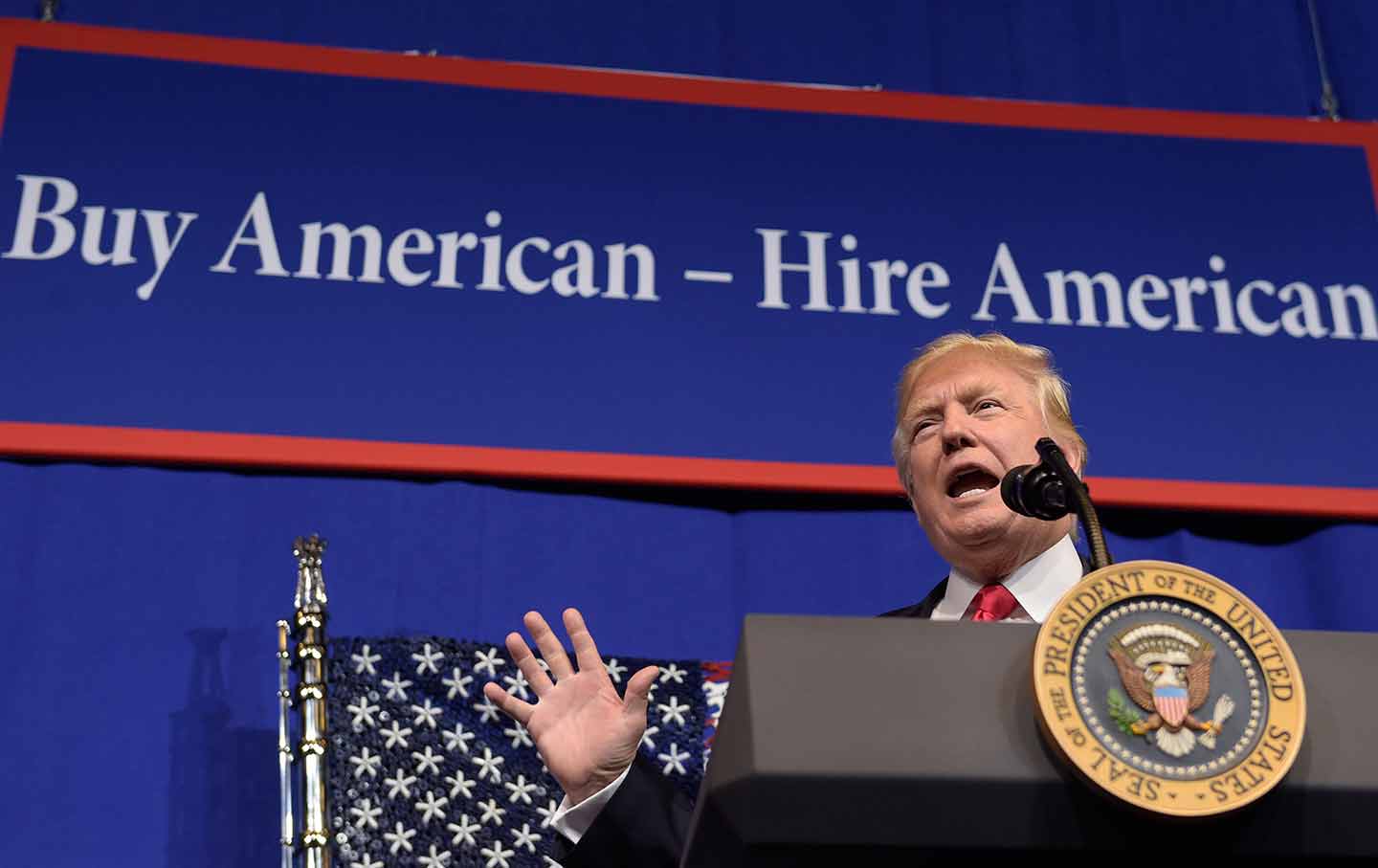 There is a good argument to be made for so-called “Buy American” initiatives. Done right—as part of a national industrial policy that embraces smart regional development and fair-trade protections—they can play a real role in creating sustainable, long-term prosperity.

Unfortunately, Donald Trump is not doing it right. His combination of crude nationalism and failed conservative economic calculations makes “Buy American” into a bumpersticker slogan on the back of a truck that is hurtling toward the economic low road.

During Tuesday’s swing into the historic Midwestern manufacturing city of Kenosha, Wisconsin, Trump restated the promises of his 2016 campaign without really taking action. It was a full-on populist spectacle. The president even brought along White House “strategist” Steve Bannon—the master manipulator of messaging for the Trump campaign who, despite the “palace intrigue” gossip of the moment, remains the populist puppeteer in the Trump White House. The main act was Trump’s signing of a much-heralded “Buy American, Hire American” executive order.

But it was mostly theater. As with Trump’s campaign promises, the executive order is full of loopholes that are designed to protect Wall Street interests and multinational corporations—at the expense of American workers and communities. The biggest of those loopholes involves the fact that dozens of countries currently get waivers that allow them to avoid following “Buy American” policies.

When he claims to be making major moves but instead tinkers around the edges, Trump deceives voters who trusted him.

“The administration cannot have a policy of ‘Buy American, Hire American’ and simultaneously authorize American taxpayer funds to be offshored to buy goods made by workers in the 59 countries that currently receive Buy American waivers under our trade agreements,” explains Lori Wallach, the director Public Citizen’s Global Trade Watch project. “If President Trump is serious about strengthening ‘Buy American’ and delivering on his pledges to create more American manufacturing jobs, he could immediately withdraw with 60 days written notice from World Trade Organization procurement rules with no penalty and invoke his executive authority to reverse all 59 trade pact Buy American waivers.”

Wisconsin Senator Tammy Baldwin and Oregon Senator Jeff Merkley have been urging the president to focus on exactly those issues. In a March letter to Trump, which highlighted a new Government Accountability Office (GAO) study of the WTO’s Agreement on Government Procurement, the Democratic senators wrote: “This report finds that our government allows foreign firms more opportunities to bid on US taxpayer-financed procurement than American firms receive in return from trade partner countries.”

Baldwin and Merkley asked the Trump administration to suspend waivers that allow foreign firms to get around ‘Buy American’ requirements until fairer procurement agreements are negotiated.

“You promised the American people a ‘Buy American, Hire American,’ trade policy. This report makes clear that our manufacturers are losing out in our trade deals. We are calling on you to honor your commitment by suspending Buy American waivers for foreign firms until government procurement chapters in our trade agreements are renegotiated. Absent such action, every government contract your administration signs risks sending hardworking Americans’ tax dollars abroad. Removing such terms from agreements such as the North American Free Trade Agreement (NAFTA) is an important step to trying to reverse our large trade deficits and provide more demand for US made manufactured goods,” the senators wrote in March.

Trump could have reviewed the Baldwin-Merkley letter and incorporated its proposals into his agenda before signing his executive order. He could have sat down with Baldwin, whose home state he was visiting—and who since 1999 has been one of the most engaged members of Congress when it comes to debates on trade and manufacturing policy. The president clearly understands that Baldwin is a key advocate on trade and procurement issues; indeed, he suggested in a Tuesday interview that he agrees with “the concept” of legislation proposed by Baldwin that would require American iron and steel products to be used in water infrastructure projects. (Speaker Ryan and House Republican allies stripped similar language from a major waterways bill last year.)

Despite such talk, however, Trump appeared in Kenosha surrounded by Republican operatives and officials, a number of whom have for years sided with multinational corporations rather than workers in trade debates.

Where’s the disconnect here? That’s easy to explain. Trump has never been serious about the trade and procurement policies that he made central to his campaign. He has never tried to familiarize himself with the basic steps that could be taken to make good on his campaign promises. The ineptness with which most media outlets cover debates about trade and industry has allowed Trump to avoid scrutiny during the campaign—as did the excuse of ignorance. But the campaign is over; Trump is president. At this point, when he claims to be making major moves but instead tinkers around the edges of the issues involved, Trump deliberately deceives voters who trusted him.

That’s frustrating for people who are serious about trade, manufacturing, and jobs. “While today’s executive order is a step forward, Wisconsin workers can’t wait for studies and reports—we need real action now,” said Baldwin, who on Tuesday announced that: “I am renewing my call for President Trump to suspend all Buy American waivers for foreign firms. The promises that have been made to our workers must be kept….”

Trade and procurement policies should be reformed—not with the purpose of isolating the United States but with an eye toward forging agreements that benefit workers, the environment, and human rights in all countries. Industrial policy and planning should be embraced so that haphazard development policies do not leave American communities and whole regions behind—and so that the United States can finally begin to prepare for the future without resorting to the crude xenophobia, crony capitalist corporatism, and political gamesmanship that continues to characterize Donald Trump’s approach to vital questions of how the United States will engage with a changing and challenging world.