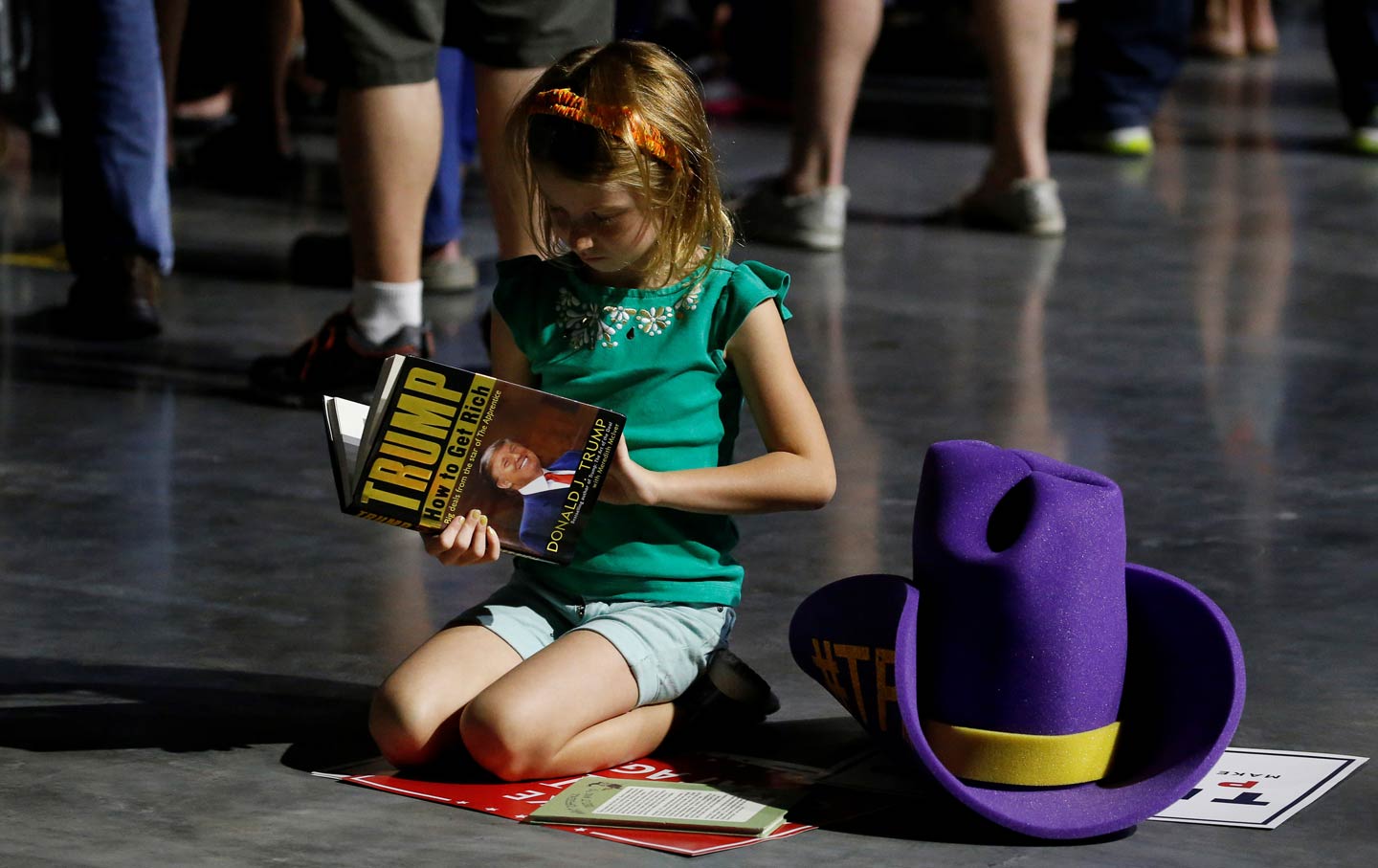 Hollie, age 7, leafs through a copy of Trump: How to Get Rich as she waits for the start of a Trump rally in Roanoke, Virginia, on September 24, 2016. (Reuters / Jonathan Ernst)

This was the question Hillary Tulley, a public-school science teacher in Skokie, Illinois, recently overheard students in her ninth-grade science class discussing. One student apparently thought that Jews deserve to burn; the other two disagreed. “I’ve been a teacher for 24 years,” Tulley says, “and I’ve never heard that kind of talk before.”2

Some 2,000 miles away, in a white suburban community in Washington State, Kyrian Smith caught her sixth-grade students engaging in similarly hate-filled speech, although in this instance they chose to target Muslims and students of color. “White students said in class that they were scared of brown people and thought all Muslims should be removed from the country,” she says. “The two Muslim students were bullied and called ISIS fighters. My black students were being called n-words.” As one of two black children at her own school when she was growing up, Smith says she knew what the targeted kids were experiencing.  3

Meanwhile, back East, even proudly liberal enclaves like Newton, Massachusetts, have been convulsed by bias eruptions. Michael Zilles, president of the Newton Teachers Association, says the district’s schools have been rocked by instances of anti-Semitic graffiti, bigoted comments directed to an African-American student group, and a Confederate Flag—“here in Massachusetts!”4

“We have had more racial incidents in the last 12 months than there have been in years,” he says.5

Across the country, educators are reporting a disturbing surge in hate-laced bullying among students of all ages, from the youngest elementary-school tykes to the most jaded high-school seniors. While bullying has a long and sordid history in American classrooms, the current surge is notable both for the similarity of its targets—Muslim students, immigrants and children of immigrants, children of color, girls, Jews—and the language used against them. And educators have developed a strong theory as to the cause: Donald Trump and the degraded discourse of this election season.6

“It’s something I’ve just started to notice lately, and I think that occurs in part because of what they’re hearing in their homes, on TV, and from Trump,” says Richard Peacock, a writing instructor in Orlando, Florida, who has seen an increase in expressions of bias against immigrants, Latinos, and Muslims in some of his students’ essays. “They’ll treat Americans of Latino descent as immigrants even when they’re not, or conflate Puerto Ricans with Mexicans, or express the idea that all Muslims are radicals,” he says. 7

The Southern Poverty Law Center (SPLC) began investigating the surge in bias incidents this past March when Maureen Costello, leader of the group’s Teaching Tolerance anti-bullying program, sent out an online questionnaire to teachers across the country. She was stunned to receive 5,000 comments in three days. Many of the respondents, she says, began by saying, “Thank God you asked, I thought it was just me and my school.”8

According to the SPLC, more than half of teachers surveyed reported an increase in “uncivil political discourse.” More than a third observed an increase in anti-Muslim or anti-immigrant expressions. Forty percent said they were hesitant to teach about the election. And more than two-thirds reported that students—mostly of immigrant, Muslim, or minority background—have expressed concerns about what a Trump win would mean for their families. Of the 5,000 comments and stories that were ultimately collected by the SPLC, approximately 1,000 mentioned Donald Trump by name—five times more than all the other politicians cited in the survey combined. (The other politicians were Hillary Clinton, Bernie Sanders, and Ted Cruz.) Drawing from the data, the SPLC coined the phrase that has stuck: The Trump Effect.9

The SPLC survey, like my own and others’ subsequent research, is explicitly anecdotal in nature. But the stories leave little doubt that the effect is real and on the upswing—and it makes perfect, if painful, sense. 10

“Politicians are unusually important voices of authority in our social fabric at this time,” says Glenn E. Singleton, author of Courageous Conversations About Race and founder of the Institute for Courageous Conversations About Race at Unitec Institute of Technology. “In schools, children are punished for the very transgressions which they see those seeking the nation’s highest office being rewarded.”11

A case in point: Not long after the “pussygate” tape dropped in October, Hillary Tulley, the Skokie Science teacher, says that she saw a boy “trying to intimidate a girl.” His method of torment? Talking about her “pussy.” 12

To be sure, the Trump Effect is not just for kids. A loud subset of Trump’s adult supporters routinely sport T-shirts with slogans not fit to be reprinted here, and, over the last year, have committed a string of violent, racially charged attacks. In at least one instance, the offending adult was a teacher.13

On October 28, the ACLU of Arizona sent a complaint to the Department of Justice. The letter alleged that Faye Miles, a teacher at a public charter school in Phoenix, had targeted an 11-year-old son of Somali immigrants for repeated abuse. Myles allegedly grabbed and choked the boy, denigrated his faith, ignored him when he attempted to answer questions, and implied that he would grow up to be a terrorist. During class she told him, “All you Muslims think you’re so smart,” then continued, “I can’t wait until Trump is elected. He’s going to deport all you Muslims.” After that, his classmates took up their teacher’s crusade, taunting the boy on the bus ride home. 14

When adults like Myles bully children, it is just wrong. When kids bully kids, it’s not just wrong, but instructive—which is why our children might have the most to teach us about the Trump Effect. First graders may not command a clear understanding of the policy issues surrounding immigration. But that doesn’t mean that they fail to grasp the invidious essence of the Trump candidacy: divisiveness, domination, and the license to hate.15

Ruben Brosbe, an elementary-school teacher in Harlem, related the story of a recent school trip to a skating rink in Central Park that has the Trump name prominently displayed on the walls.16

“A kid came up to me and said, ‘Mr. Brosbe, there’s a sign that says No Muslims Allowed,’” Brosbe says. “I knew that wasn’t true. But it shows the filter kids are working with; they take the information they see and make their own sense of it. And in some ways, they draw the most logical conclusions.’”17

Manufacturing bullies is not all that complicated. You take the fear and anxiety of ordinary life, and you give some people the license to focus it on other people. Trump’s message to his followers is: The way to solve your problems is to take it out on “them.” Release your rage on the target of your choosing.18

The damage to our school culture is already evident. Schools have invested years in anti-bullying programs, and a lot of that progress has been undone in a few short months. The damage to our political culture will likely be even greater, and take longer to repair.19