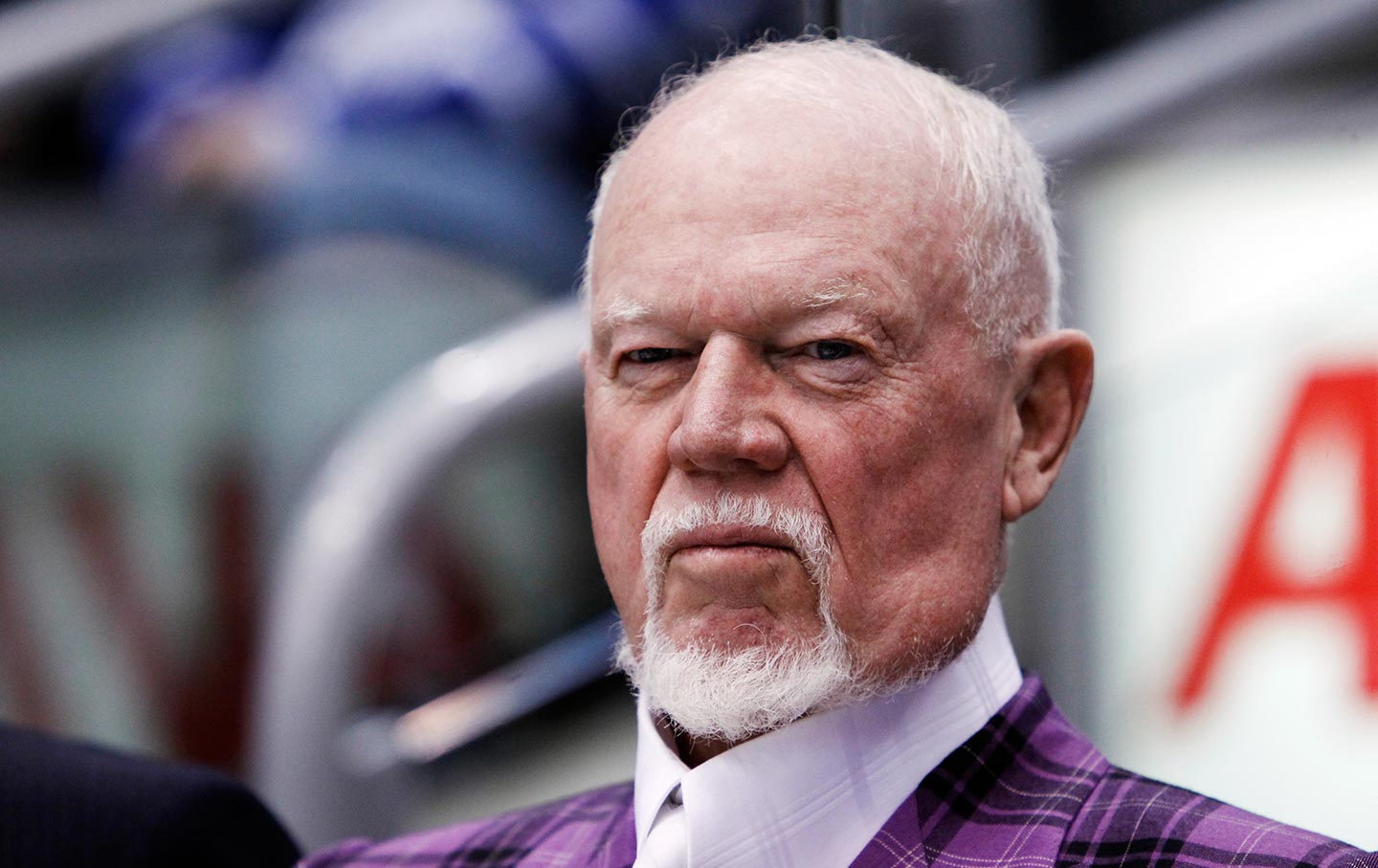 Former hockey commentator and coach Don Cherry looks on during a skills competition in Toronto on January 18, 2011. (Reuters / Mark Blinch)

Not unlike racism, Don Cherry is a Canadian institution. Pugnaciously prejudiced, the 85-year-old now-former cohost of Sportsnet’s Hockey Night in Canada has been on the scene seemingly as long as hockey itself. In a 1993 Sports Illustrated profile of Cherry, Leigh Montville wrote,”He knows the end will come someday. Maybe someday soon. Maybe tonight. He is pushing, pushing, pushing the limits too far, saying too much. One final piece of outrage will bubble from Don Cherry’s high-volume mouth…” That “someday soon” took 26 years, but now one of the most prominent voices of reaction and bigotry in sports is off the air.

Cherry’s offense was “minor compared to things he had said in the past,” according to hockey reporter Jashvina Shah, but after an explosive response to his most recent comments, it was the final straw. Cherry, in his “Coach’s Corner” segment on Hockey Night in Canada attacked immigrants who don’t wear “poppy pins” on Remembrance Day, our northern neighbor’s Veterans Day. These pins are a Canadian tradition that are meant to honor vets.

Cherry said, “I live in Mississauga [Ontario]. Very few people wear the poppy. Downtown Toronto, forget it. Nobody wears the poppy.… Now you go to the small cities. You people…that come here, whatever it is—you love our way of life. You love our milk and honey. At least you can pay a couple bucks for a poppy or something like that. These guys paid for your way of life that you enjoy in Canada. These guys paid the biggest price for that.”

After an intense din of online outrage and mainstream punditry, Sportsnet president Bart Yabsley wrote in a statement on Monday, “Sports brings people together. It unites us, not divides us. Following further discussions with Don Cherry after Saturday night’s broadcast, it has been decided it is the right thing for him to immediately step down. During the broadcast, he made divisive remarks that do not represent our values or what we stand for,”

As for Cherry, he refused any effort at apology, reconciliation, or even understanding. “I know what I said and I meant it,” Cherry told the Toronto Sun after he was fired. “Everybody in Canada should wear a poppy to honor our fallen soldiers…. To keep my job, I cannot be turned into a tamed robot.”

Aaron Lakoff, a Montreal activist and host of Changing On the Fly, a podcast that looks at hockey through a feminist and antiracist lens, said to me, “Like millions of other Canadians, I grew up watching Don Cherry on Coach’s Corner between the 1st and 2nd periods on Hockey Night in Canada, and we just had to put up with his loud mouth and loud suits. For decades, Cherry has spared no one in his vitriolic rants—women, Francophones, indigenous people, and immigrants. But today, people of color and anti-racist hockey fans are breathing a sigh of relief. The prime minister of Saturday night is no more. Cherry getting fired represents a huge victory for us in the digital age, when we can band together on social media and rip the platform away from one of the most bigoted men in hockey media history. My hope is that Sportsnet won’t make the same mistake that brought us Don Cherry in the first place by appointing another old white man to take his place, and instead seek out a fresh voice that represent the tolerant and open society we want to build.”

It must be asked, however: Why, after all his years of nativism and xenophobia, did this finally get people to push back on Cherry? Several hockey writers with whom I spoke were trying to figure that very thing out. Canadian sportswriter Shireen Ahmed had a sharp analysis when she messaged me, “Not because of any integrity [by Sportsnet.]. It was because they had no choice. He went after immigrants for not supporting vets without realizing that so many vets are immigrants or come from [what] were from Commonwealth countries.”

Now, in what we can hope remains a post-Cherry hockey world, Shah says that looking forward is the most important question. She said, “I’m really glad they did fire him but I’m also afraid that most people disgusted by Cherry will just say oh it’s over. But Cherry still has a platform going forward. Now is the time for people in hockey media to make sure that Cherry can’t spread his hate and, for everyone who considers themselves allies, to stress that we need to take educating Cherry’s audience that loves him more seriously. That’s the only way to marginalize him. You have to educate his community.”

Shah and others expect Cherry, even at age 85 to reemerge on another forum. As for Sportsnet, Shah says that firing him is simply not enough, because “who they choose to replace him will say a lot about their company and what they want to do going forward.”

She’s right. Don Cherry’s lifework was to limit and marginalize the people who love this game. But now Sportsnet has a unique opportunity: not only with a way-overdue firing that it was forced to make, but a chance to show the hockey world that this is a sport for everyone.