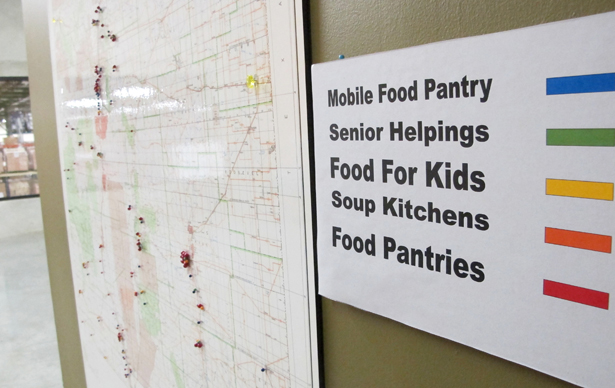 Jodi and Randy Speidel, a couple in their mid-40s, taped a note to the front door of their one-bedroom rental home warning visitors of carbon monoxide. They let their three cats outdoors and wrote a note attesting that their next decision was a mutual one. Then, in their locked bedroom, they lit two charcoal grills and committed suicide.

The couple’s 20-year-old daughter had recently turned to gofundme.com to seek assistance for her parents, The Columbus Dispatch reported. Describing them as “the hardest-working people I know,” she wrote, “now that they literally cannot work anymore, they have nowhere to turn to.”

Chronic illnesses had forced both to stop working. They had lived without heat all winter and without water for a week. Jodi had applied for assistance and was waiting for a response. She had turned to food banks but was struggling to cook without water. They were down to $33 in savings.

Jodi herself sought help from gofundme.com and giveforward.com. She in fact signaled a little hope—writing that she had “found a job that is willing to work with my illnesses.” But she also described driving more than 30 miles “on gas fumes” and not knowing if she “would make it back home or even there.”

“I have turned in every direction possible and don’t know what else to do,” Jodi wrote. “If you can help we will be forever grateful and will even pay you back once we get back on our feet.”

One thing the Speidels apparently didn’t do was turn to their neighbors—some of whom said they would have offered help had they known of the couple’s struggles.

“We have become such a disassociated and anti-social society that we don’t even know our own neighbors,” a pastor lamented to the Dispatch, suggesting that a tighter community could have made a difference.

We don’t really know if their neighbors were in a position to provide the kind of resources the couple needed. But it’s notable that Jodi opted for the relative anonymity of reaching out online rather than turning to her neighbors. Over the years, I have heard from many people with low incomes about the shame and stigma of poverty, and how it keeps them from telling others about what they are going through.

In March, a couple of colleagues and I met with five members of Witnesses to Hunger, an advocacy organization whose members use photographs and their testimonials to document their experiences in poverty and advocate at the state, local, and federal levels for policy reform. We wanted to explore a campaign that would push back against the shaming of low-income people by the media, politicians, and other high-profile individuals, and support individuals who want to share their stories in order to educate the public and policymakers about poverty in America.

“Telling my story was like coming out of the closet,” said Betty Burton of Martha’s Vineyard. “Stigma makes people hide in the shadows. Your next-door neighbor could be struggling with poverty and you don’t even know it.”

Anisa Davis of Camden said she felt ashamed to tell her story until she became a member of Witnesses to Hunger. “People need to tell their stories in order to rid themselves of the baggage that comes with that shame.”

But finding the courage to tell one’s story is easier said than done, especially when much of the media and our politics not only blame people who are struggling for their poverty, they also bash them for it. Philadelphia Witness to Hunger member Angela Sutton spoke of the stereotypes propagated about people with low-incomes, such as their being “dumb, lazy, or just making babies.”

“Stories rarely show the positive changes that Witnesses and others are trying to create in our communities,” said Sutton. She said these kinds of stories would “break barriers” and help “people who are struggling to speak up.”

In addition to Jodi’s posting online, the Dispatch reports that she also had applied for assistance. We don’t know what she applied for—or whether her application would have been approved—but it’s worth looking at how hard we make it for people to get help in our country. Despite all of the rhetoric that suggests “welfare dependence” is rampant, the numbers tell a far different story.

• Only about 1 in 4 households eligible for federal rental assistance actually receives it. By mid-2014, because of sequestration, there were 100,000 fewer families receiving housing vouchers. In Ohio, more than 370,000 low-income renter households pay more than half of their monthly cash income towards housing costs.

• Ohio opted out of a waiver of work requirements for recipients of nutrition assistance, despite the continuing struggles of low-wage, unemployed, and underemployed workers. This impacted thousands of people, many of whom reported poor physical or mental health.

• According to the Organization for Economic Cooperation and Development (OECD), when it comes to disability benefit systems, the United States has “the most stringent eligibility criteria for a full disability benefit.” More than 80 percent of people are denied when they submit their initial application, and less than 40 percent are approved after all appeals are exhausted. Every year, thousands of applicants die while awaiting their benefits.

Jack Frech, the former director of the Athens County Department of Job and Family Services in Appalachian Ohio, recently retired after more than thirty years of service in the welfare department. He said times have changed and we have made it much more difficult to get assistance.

“I’ve watched the stigma about welfare grow at the hands of both political parties at all levels of government,” said Frech. “It is deeply ingrained in our administration of assistance programs. We have codified the belief that we are not our neighbors’ keeper. Shame on us.”

I hope a reporter does a follow up to this story: What assistance did Jodi Speidel try to obtain? Did she receive a response? What is the process for applying? Is there any expedited process for emergency assistance? How could we reform the system to prevent the next unnecessary deaths from occurring?

The unavoidable truth is this: These deaths did not need to happen, and the Speidels should not die in vain.