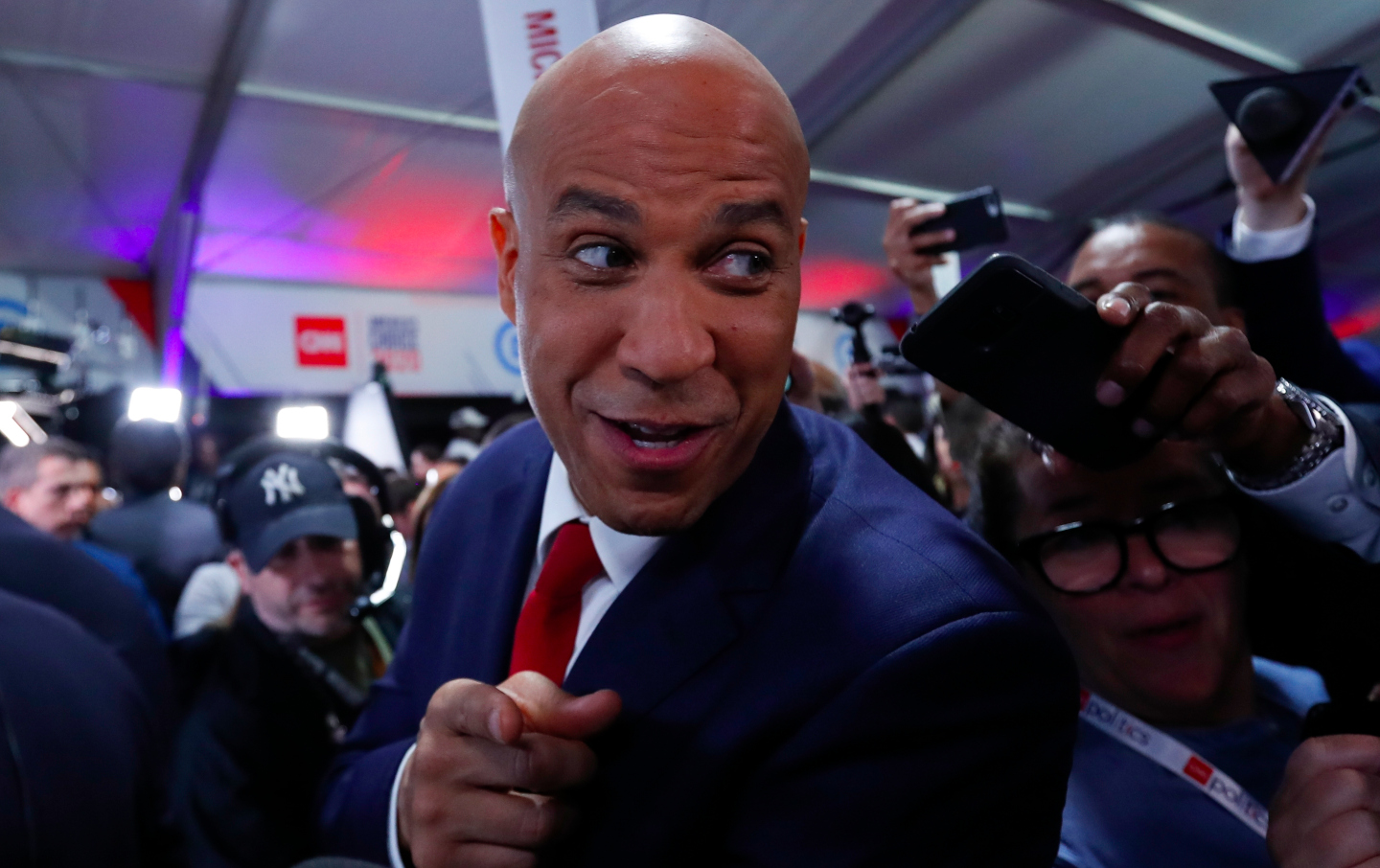 Yet the debate stage served as something of an equalizer. Precisely because Biden and Harris were leading the race, they became ripe targets for third-tier candidates eager to bring them down. Historically, a major role of minor candidates has been to mainstream plausible lines of attack against front-runners. Candidates who are in the polling basement have the luxury of having nothing left to lose, so they can be fierce polemicists in a way that those in the lead often avoid.

While Tuesday night’s debate focused on ideological divisions between progressives and moderates, Wednesday night’s slugfest was much more personal, zeroing in on the records of the candidates.

Gabbard and Booker both took advantage of the fact that the Democratic Party is moving left on criminal justice issues as a way to bring up unpleasant facts about the front-runners.

“Now Senator Harris says she’s proud of her record as a prosecutor and that she’ll be a prosecutor president,” Gabbard noted. “But I’m deeply concerned about this record. There are too many examples to cite but she put over 1,500 people in jail for marijuana violations and then laughed about it when she was asked if she ever smoked marijuana. She blocked evidence that would have freed an innocent man from death row until the courts forced her to do so. She kept people in prison beyond their sentences to use them as cheap labor for the state of California.”

Gabbard’s blow landed hard: It was focused, detailed, and devastating. Equally powerful was Booker’s bristling mockery of Joe Biden’s claim to have a criminal justice reform plan. “Since the 1970s, every major crime bill—major and minor—has had his name on it,” Booker argued. “And, sir, those are your words, not mine. And this is one of those instances where the house was set on fire and you claimed responsibility for those laws. And you can’t just now come out with a plan to put out that fire.”

Booker shrewdly pointed out that Biden has a habit of taking credit for the positive achievements of the Barack Obama administration, while distancing himself from its unpopular policies. When Biden wouldn’t comment on how he felt about the mass deportations Obama oversaw, Booker pounced, saying, “Mr. Vice President, you can’t have it both ways. You invoke President Obama more than anybody in this campaign. You can’t do it when it’s convenient and then dodge it when it’s not.”

Because the debates are broken into two nights, the top-tier candidates weren’t on one stage arguing with each other: Bernie Sanders and Elizabeth Warren had no chance to debate Biden or Harris this week. This created an opportunity for third-tier contenders to act as de facto surrogates for the missing candidates. On Tuesday night, John Delaney was a kind of proxy Biden, articulating the centrist case against Sanders and Warren. At Wednesday night’s debate, de Blasio served a similar function, acting as an avatar for the progressive forces.

Challenging Biden’s warnings that the health care policies of Sanders, Warren, and Harris would be too disruptive and expensive, de Blasio forcefully made the case against the status quo. “I don’t understand why Democrats on this stage are fearmongering about universal health care,” the New York City mayor said. “It makes no sense. Ask the American people, they are sick of what the pharmaceutical companies are doing to them. Ask them what they feel about the health insurance companies. They feel it’s holding back their families because they can’t get the coverage they need. They get a lot of noes. They don’t get a lot of help from health insurance companies.”

Gabbard, Booker, and de Blasio are still long-shot candidates. It’s unlikely they will get the Democratic nomination, let alone become the next president. But the rough equality of the debate stage allowed them to present compelling arguments, some of which legitimately wounded the front-runners. The latters’ defensiveness is proof that the blows landed: On the CNN post-mortem, Harris dismissed Gabbard’s devastating attacks on her criminal justice record by saying, “[O]bviously, I am a top tier candidate…[while Gabbard is just at] zero or 1 percent.” If Joe Biden or Kamala Harris fails to win the nomination, it’ll be in no small part due to the scars they received from the long-shot candidates.