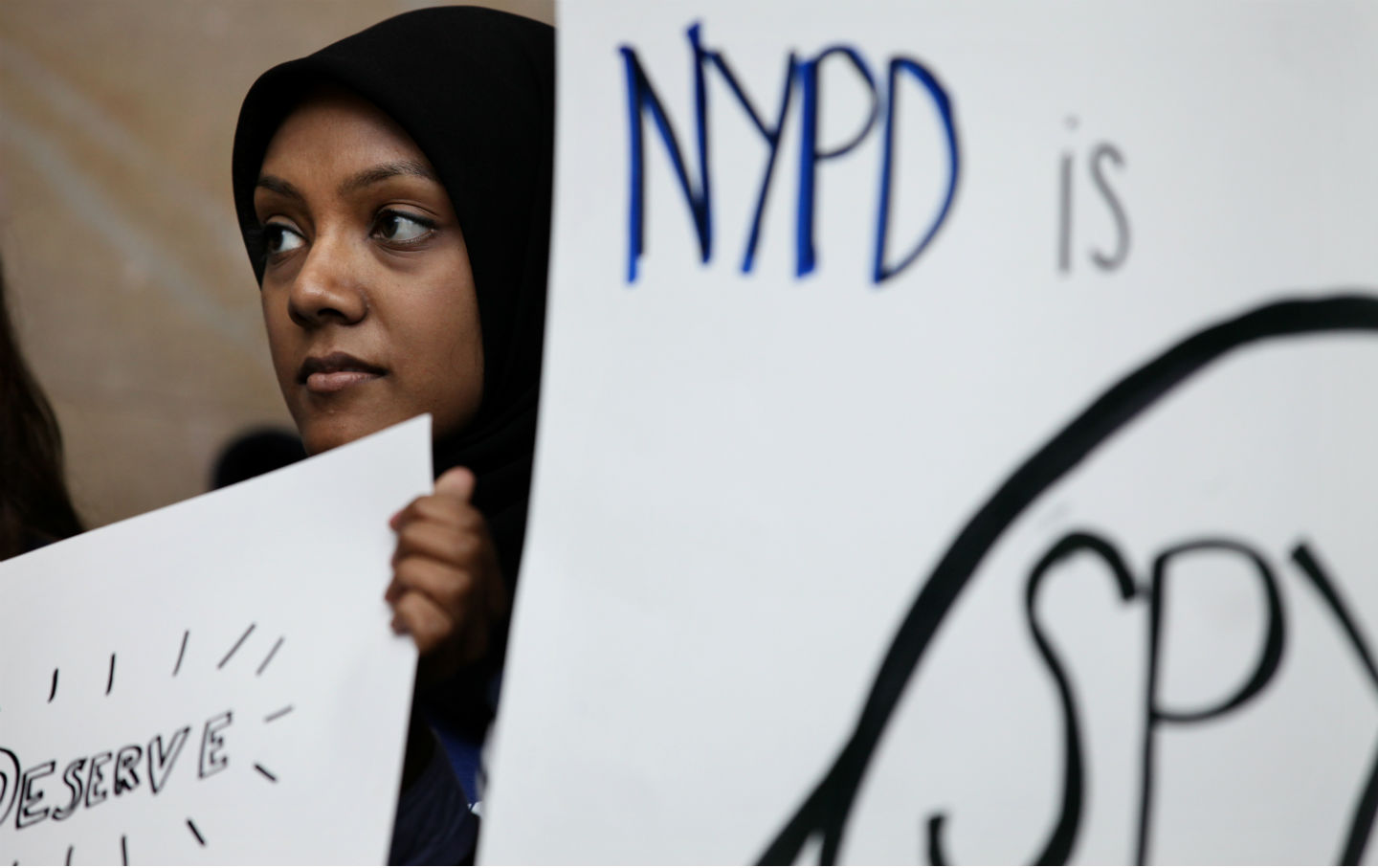 “Most random appearance ever,” Dandia, a plaintiff in one of three lawsuits against the NYPD over the political surveillance of Muslims, wrote on Facebook. “Wonder if he knows that his police department sent in multiple informants here.”

De Blasio’s visit to the Brighton Beach Islamic Center on June 12 came days before the start of the holiest month in the Islamic calendar, and the mayor made sure to wish congregants a blessed Ramadan. One week later the mayor’s lawyers extended another Ramadan olive branch to New York’s roughly 600,000 Muslims. In a joint letter with Dandia’s attorneys, they wrote to a federal judge that a settlement in principle had been reached in two lawsuits over a vast post-9/11 Muslim surveillance program begun under former Mayor Michael Bloomberg.

While a full settlement could be announced in July, and Bloomberg is now 18 months out of office, don’t expect the police to stop spying on innocent New York City Muslims any time soon. Arguments from city lawyers as well as de Blasio’s recent decision to expand the NYPD’s counterterrorism cadres by hundreds of officers make clear that the surveillance, stings, and suspicion will continue.

New York City Muslims said they noticed strange faces showing up in mosques not long after September 11. But the wider city only caught on after a Pulitzer Prize–winning series of reports from the Associated Press in 2011.

Secret documents revealed that officers in the NYPD’s euphemistically named Demographics Unit had catalogued hookah cafes, pastry shops, and even a New Jersey girls’ school. After the AP revealed the unit’s existence, the shadowy NYPD deputy commissioner for intelligence under Bloomberg, David Cohen, defended it in pathetically weak terms.

In the event that the Tsarnaev brothers had reached New York after the Boston Marathon bombing, Cohen hypothesized in 2013, all those hundreds of Demographics Unit memos might have helped the department “identify areas where the Tsarnaev brothers might attempt to blend in following implementation of their New York City plot.”

Or police could have just pulled open a phone book to look for Russian restaurants.

When de Blasio took office in 2014, he quickly killed the highly symbolic and highly useless Demographics Unit, which had never generated an investigative lead and never had more than 16 officers in the first place.

But as with so many city policing policies, de Blasio’s break with Bloomberg was far from clean.

In addition to the Demographics Unit, under Bloomberg the NYPD’s Intelligence Division conducted far more intrusive operations. The division paid informants to spy on Muslims like Dandia, who ran a small charity group. The police also designated at least 12 mosques as “terrorism enterprises,” marking any of their worshipers as potential suspects.

De Blasio’s administration has never given any indication that those tactics ended.

To the contrary, in May 2014, The New York Times reported that the NYPD continued to target Muslims as informants. In June 2014, NYPD counterterrorism surveillance of a Brooklyn mosque helped yield more than a dozen arrests—not for terrorism, but for selling a traditional mild stimulant drug called khat. In January 2015, Cohen’s successor John Miller said the department was tracking New Yorkers who had visited Syria.

No less an expert than Ray Kelly, NYPD commissioner under Bloomberg, has said that as far as he could tell, the department’s counterterrorism program had not changed a whit.

“There’s been relabeling, but there really hasn’t been significant change,” observed Kelly.

In one significant respect, the department is actually ramping up its counterterrorism efforts. Three hundred of the 1,300 new officers the mayor announced he will hire on June 22 will be assigned to a dedicated counterterror squad.

In over a year and a half of court battles, de Blasio’s administration has fought three lawsuits over spying.

In over a year and a half of court battles, de Blasio’s administration has also fought back against three lawsuits over spying. The city seems likely to settle only two of those lawsuits—one from Dandia and other Brooklyn Muslims, the other the latest iteration of a longstanding lawsuit over NYPD political surveillance named after 1970s civil-rights lawyer Barbara Handschu.

Lawyers in both of those cases declined to comment on potential settlement terms, citing court-ordered confidentiality agreements. But in 2013 one of the Handschu case’s lawyers, Jethro Eisenstein, compared shifts in attitudes toward civil liberties to a pendulum—sometimes becoming more permissive, other times becoming more restrictive.

Neither Bratton nor Miller would agree to significant curbs on counterterrorism surveillance, so whatever settlement is reached will most likely represent just another small swing of the pendulum.

Meanwhile the third lawsuit, from New Jersey Muslims, is not covered by the settlement talks. In January City Attorney Peter Farrell argued to appeals court judges in that suit that if Garden State mosques lost worshipers because of NYPD surveillance, those were “self-imposed injuries based upon subjective fears.”

When the lead plaintiff in that case, Farhaj Hassan, found out the NYPD was spying on his mosque, he suddenly had to wonder whether his US Army Reserve security clearance would be in jeopardy.

Like many people of color, said Hassan, his family cheered de Blasio’s election in 2013. When he realized the new mayor’s lawyers were going to continue to fight against him in court, he said, “it was one hell of an about-face.”

Hassan is cheered by the likely settlement agreement, but his legal challenge to the city will continue. So far, explained his lawyer Glenn Katon of the nonprofit group Muslim Advocates, “we have no evidence that the New York Police Department has actually discontinued its discriminatory spying practices that target American Muslims.”