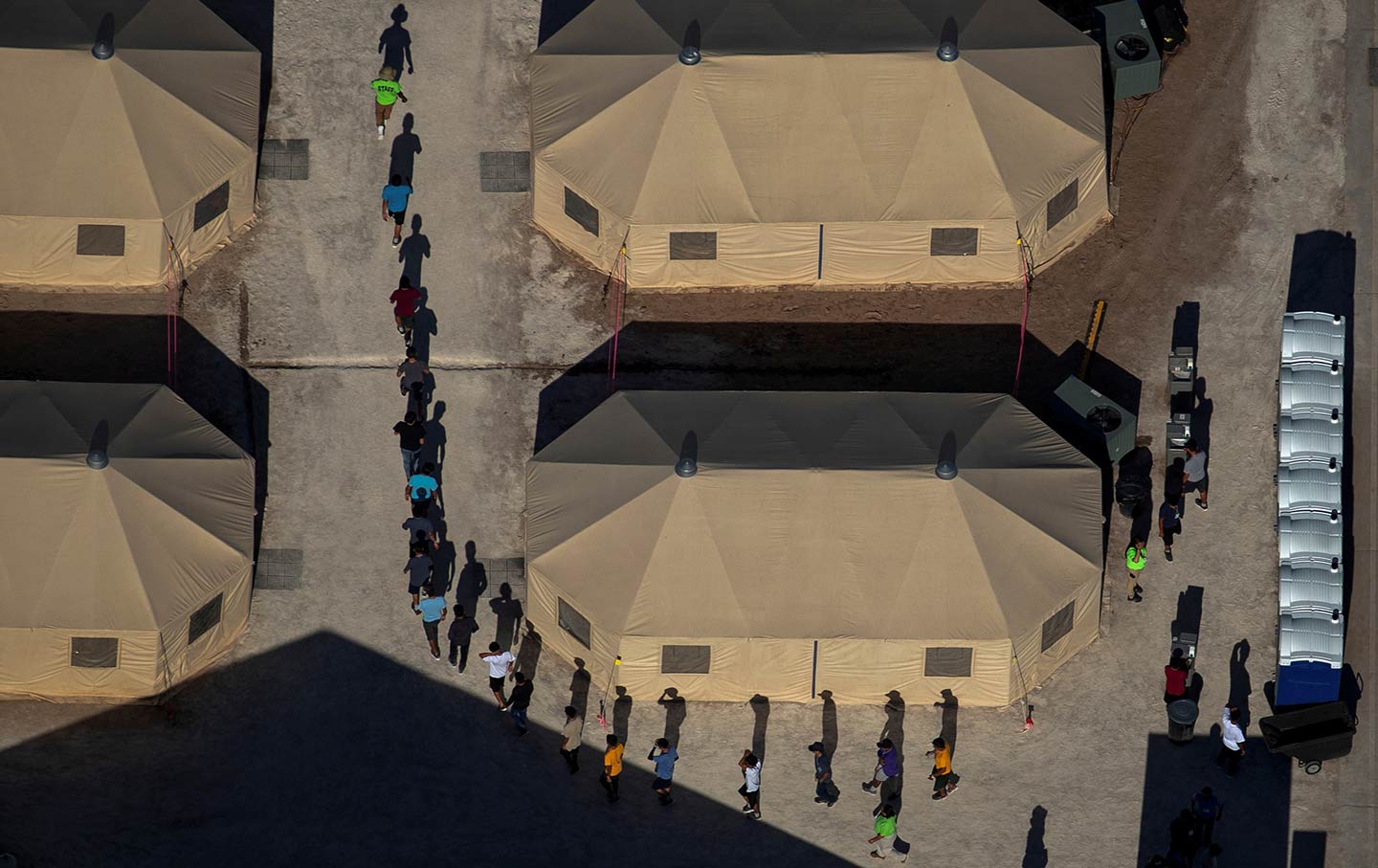 Migrant children are led by staff in single file between tents at a detention facility next to the Mexican border in Tornillo, Texas, on June 18, 2018. (Reuters / Mike Blake)

Last week, a group of lawyers visited a remote Border Patrol facility in Clint, Texas, that was designed for the temporary detention of about 100 adult migrants. What they found were some 250 children in appalling conditions. Several were sick and in quarantine; others had lice. Very young children had been left in the care of slightly older children. Although the government is bound by a legal agreement and other regulations to provide “safe and sanitary” conditions for underage migrants and to transfer them out of Border Patrol custody within 72 hours, children told lawyers they had been in the facility for weeks without regular access to beds, showers, toothbrushes, and soap.

The grim dispatch from Clint added to previous reports of worsening conditions in immigration detention facilities. The Border Patrol is currently holding about 15,000 people, nearly four times its capacity, a number that excludes the tens of thousands of people already transferred to ICE custody. In early June, the Department of Homeland Security’s Inspector General reported “immediate risks or egregious violations of detention standards” at multiple facilities, including contaminated food and poor sanitation; a previous IG report found “dangerous overcrowding” at a processing center in El Paso. While concerns about immigration detention centers predate the Trump administration, monitors describe an escalating humanitarian crisis due in part to the sheer number of people being detained and the long length of time they are held in facilities designed for temporary stays. One doctor who recently visited the Ursula Border Patrol processing facility in McAllen, Texas, wrote in a medical declaration that the conditions there could be “compared to torture facilities,” and are “tantamount to intentionally causing the spread of disease.” Since December, at least seven immigrant children have died in federal custody or shortly after being released.

The Trump administration describes the problem largely as an issue of money. The Department of Health and Human Services, which oversees the shelter system for underage migrants and is charged with finding sponsors to release the children to, claims its facilities are at capacity, causing to children to stay in Border Patrol custody for longer periods of time. “Here is a situation where, because there is not enough funding…they can’t move the people out of our custody,” acting Customs and Border Protection Commissioner John Sanders told the Associated Press. Earlier this month the administration announced that it was canceling educational and recreational programs and legal aid in shelters because of budget shortfalls at HHS, and requested $2.9 billion to expand its facilities.

On Tuesday night the House voted on a $4.5 billion emergency funding package intended to address the crisis. The measure passed after an intense debate among Democrats about the wisdom of pouring more money into a dysfunctional and expanding detention system. Some progressive lawmakers, along with immigrant rights advocates, argued that mismanagement and policy decisions made by the Trump administration were to blame for a “manufactured” crisis—and that the focus should be on dismantling the detention system, not on propping it up. Poor conditions are “not due to a lack of resources; [they’re] due to a desire—an active desire by this administration to hurt kids,” Representative Alexandria Ocasio-Cortez said on Monday evening before a meeting in House Speaker Nancy Pelosi’s office regarding the funding package. “We need to stop funding the detention of children under any and all circumstances.” Ultimately, Ocasio-Cortez was one of three progressive Democrats to vote against the bill, which passed mostly along party lines.

The overriding concern was that some of the money referred to as a “humanitarian aid” package could be used to expand detention capacity. “I think there’s been a lot of obfuscation in this debate, where people who support a more militarized border are pointing to these conditions as reason to appropriate more money for more jails,” said Clara Long, senior researcher at Human Rights Watch and a member of the monitoring team that visited the Clint facility. “Expanding detention centers means more people are going to be detained and that puts more people at risk, when the best way to ensure that children are safe and that asylum seekers’ rights are respected is to opt to release people and have them live in communities and with their families,” said Long.

Jonathan Ryan, the CEO of the legal aid organization RAICES, explained his concerns to Isaac Chotiner in similar terms. “We are being presented with a false choice,” Ryan said. “It is either you withhold funds from children who desperately need them, or you provide funds that will be used to create more cages, more concentration camps, more deaths of children at the border.”

Members of the Congressional Progressive and Hispanic caucuses in the House did manage to add some stricter conditions into the funding package, which directs $788 million to new Border Patrol facilities; $112 million for food, medical care, and other necessities for people in Border Patrol custody; and $866 million to shelters under the jurisdiction of HHS. Ultimately, Democrats hope the funding will help the administration move children more quickly from Border Patrol custody to HHS shelters, which are better equipped to care for them. But some of those privately operated shelters, called “temporary influx” facilities, are on federal property and exempt from state regulations an oversight; the bill requires that these centers meet certain standards of care and limits the time that children can be kept there to 90 days. The largest of these, known as Homestead, is a 3,200-bed compound in south Florida owned by a for-profit corporation called Caliburn International. Former White House chief of staff John Kelly joined Caliburn’s board earlier this year, shortly before the company secured a $341 million no-bid contract from the government. Long, who visited Homestead in March, said that the idea of children leaving Border Patrol custody for that shelter was “cold comfort” given what she witnessed there, although she added that a 90-day limit was better than none at all.

“There are a lot of people making a lot of money by locking those kids up. The fact is, they don’t need to be there,” said Warren Binford, the director of the clinical law program at Willamette University, and another member of the team that reported on conditions in Clint. (That team is tasked with evaluating the government’s compliance with the Flores settlement, a legal agreement governing the treatment of migrant children in federal custody.) Binford and other attorneys say that the Trump administration continues to needlessly separate children from relatives at the border—including, in some cases, their parents—and has been slow to release children to sponsors, in part because of changes to the vetting process that put sponsors at risk for detention and deportation, discouraging them from coming forward. According to Binford, many of the children held for extended periods in Border Patrol custody or in HHS shelters have parents or relatives in the United States, but the administration is making little effort to find them.

Many progressives voted for the House funding measure despite serious misgivings. “I have tremendous apprehensions about [supporting the legislation],” Progressive Caucus co-chair Pramila Jayapal said before the vote. “I am not doing so with a free heart. I am not doing so believing that this is going to solve the problems. I am doing so because I am willing in the name of these children to see if we can do something to improve those conditions at the border.” Even that hope remains tentative: Trump threatened to veto the House legislation, preferring the version that the Senate is expected to vote on later this week, which places fewer restrictions on the money. Congress has only a few days to reconcile differences between the two bills before the July 4 recess.

Whatever makes it to Trump’s desk won’t address a more fundamental problem, which is the existence of a massive (and growing) pretrial-detention apparatus that is largely concealed from public oversight. A record 52,000 immigrants are detained nationwide, thanks in part to Trump’s decision to jail asylum seekers before their hearings. Meanwhile, migrants are being prevented from crossing the border to request asylum, leaving them with the choice to remain trapped in Mexico or attempt a dangerous border crossing between ports of entry. Oregon Senator Jeff Merkley, the lone member of the Senate Appropriations Committee to vote against the funding package last week, said that while he does think that emergency funding—with strict conditions—is necessary to alleviate immediate suffering, ultimately, “Children shouldn’t be kept in any sort detention facility for any length of time.” He continued, “The administration is still embracing this basic idea of inflicting trauma on children as a strategy for deterring immigration. That is immoral, it is evil, and you see it manifest itself one time after another.”