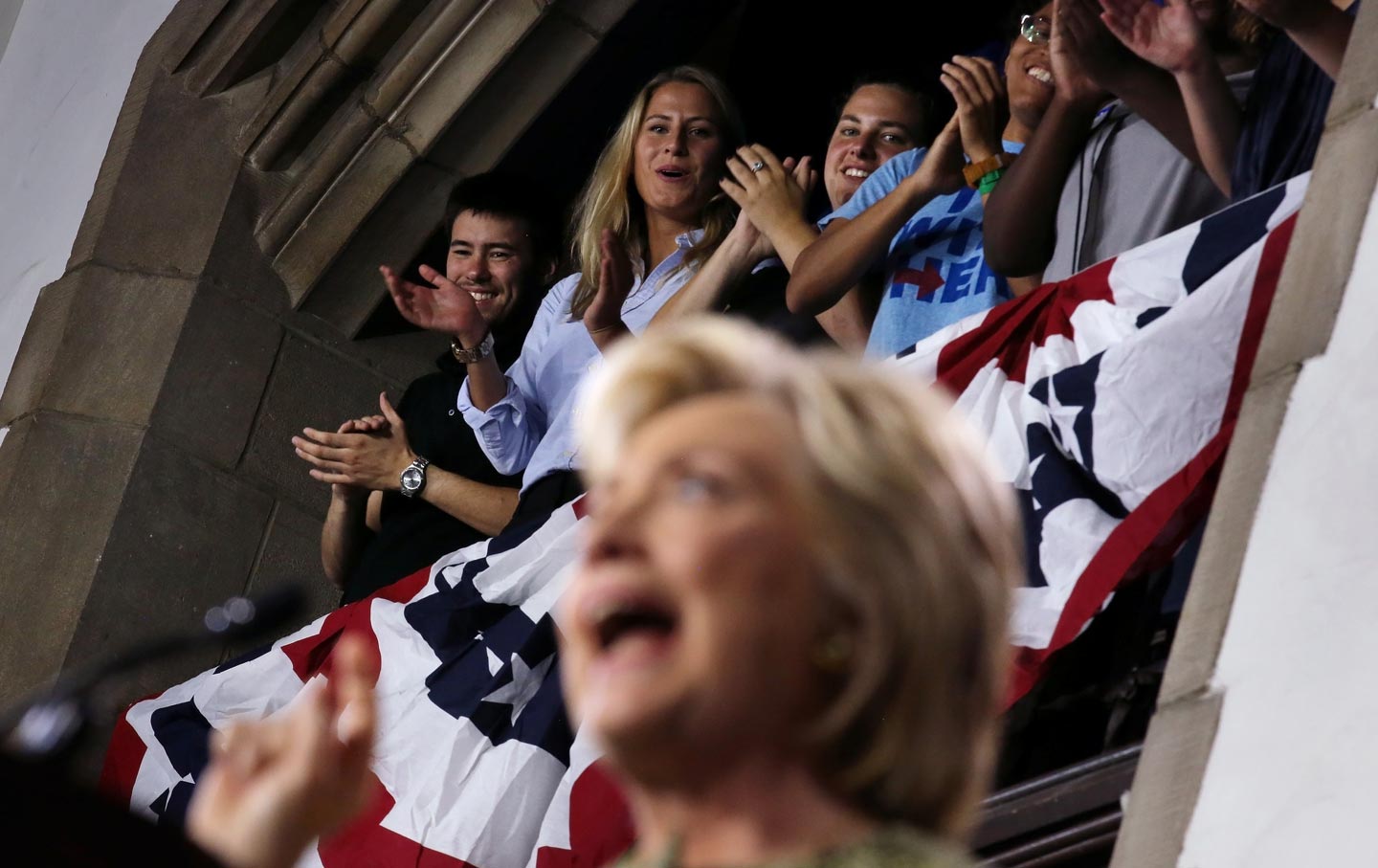 I never said whom I was voting for when I was your professor. I wanted our seminar room to be a safe, neutral space where we engaged with the art of persuasive essayists—E.B. White, James Baldwin, George Orwell, Rachel Carson, Henry David Thoreau—without judging one another’s credos. Meanwhile, we were living through history together: from the first Gulf War to Anita Hill’s testimony about Clarence Thomas’s sexual harassment to Bill Clinton’s impeachment hearings to September 11, when we suspended our discussion to watch the towers cascade down, not knowing yet how many lives were lost. Eight years ago, I joined your celebrations on the quad when America elected its first African-American president. And just last winter, 10 of you—all accomplished, dazzlingly intelligent women and self-declared feminists—cooked up an international feast in my kitchen and admitted that not one of you was with her, the first female presidential nominee of a major party in the history of our nation.

All this time I kept my politics to myself, unless you asked me my views in private. But now I can’t hold back, and I hope you’ll forgive me for saying why what seems like a personal decision—to step inside a poll booth, or not—feels no longer like a matter of individual choice to me but like a civic duty the dereliction of which will have devastating consequences for us all.

You have every reason to distrust our current political system. An unregulated Wall Street was permitted to gamble with your future, and those of you who graduated during the 2008 financial crisis are still feeling the sting of high college debt, rising rents, and uncertain job prospects. When you occupied Wall Street, the mainstream press did not take you seriously enough, probably because you were offering the world another paradigm instead of the tired one they knew. Your mode of self-governance wasn’t hierarchical; it didn’t mimic the system you knew to be broken.

Your liberal arts education has given you a far more nuanced, complex understanding of the climate crisis, stratified inequality, systemic racism, rape culture, the needs of the LGBTQ community, and the harm our foreign policy inflicts on innocent people across the globe than that of most in Congress making decisions on your behalf. Now, more than ever, we need people who think like you to take the mantle as leaders. It starts at the grassroots level, on school boards, village boards, the state legislature, and so on. You need to make yourselves heard.

Here’s what I’ve learned about how the world works outside our utopian seminar room: The march of history is one long, shambling shuffle, a spasmodic hokey pokey of one step forward, and two, sometimes three or four giant steps back. History is Jimmy Carter donning a cardigan, turning down the thermostat to 65 degrees, and putting up solar panels on the White House. History is his successor, Ronald Reagan, taking those panels down and appointing James G. Watt to head the Department of Interior, a man who promised to “mine more, drill more, cut more timber” on America’s public lands “until Jesus returns.”

History is members of the National Women’s Party getting arrested for picketing the White House and going on a hunger strike in prison to give women the vote. History is a presidential candidate saying that a powerful, privileged man can grab a woman by her genitals and do whatever he wants to her body, and history is his supporters who joke that the 19th Amendment should be repealed. History is Rosa Parks refusing to go to the back of the bus, and history is also Freddie Gray dying in the back of a police van.

I get why you find the two-party system limiting. We told you that binaries are reductive, that dualistic thinking is the hallmark of the adolescent mind. And yet here’s the thing: The bullies who seize power when people like us don’t work together are the people who see things in black and white. They squash public dissent by saying things like, “Either you are with us, or you are with the terrorists,” when we march against an unjust war. They foment hate. They threaten journalists, the fourth estate that safeguards our democracy, with lawsuits. They trigger collective anxiety attacks and make the rest of the world quake with fear.

That’s why, more than ever, we need you to stay engaged. I can’t watch our country take any more giant steps back. I can’t spend another four years fighting for Planned Parenthood, watching hate crimes (that Trump has incited) rise, and feeling helpless as our CO2 levels reach unsustainable heights. Nor, I hasten to say, do you want to watch student-loan debt reach the stratospheres, or rape culture become even more prevalent with the knowledge that men can sexually assault women, brag about it, and still get elected president. And then there’s the promise of an anti-choice Supreme Court, and access to birth control denied. There’s far too much at stake.

We need to elect a president who will push a progressive agenda forward. Hillary Clinton is that person.

That’s why, more than ever, we need to elect a president who will push a progressive agenda forward. Hillary Clinton is that person.

Clinton crushed Trump in all three debates, but don’t assume she will win and that you don’t have to help. It’s vital that she not only win but win by a landslide, preferably with Democrats taking both houses of Congress and many state races too. We need to send the message that conservative obstruction and apathy to the suffering of American people will no longer be tolerated. For those distrustful of Clinton, we can also say that an inspired and focused left-wing movement will send a message to her as well, that we expect her to turn her progressive promises into action. If we don’t vote all the way down the ballot and flip Congress, she will have no choice but to govern from the center.

Don’t throw away your chance to be part of a historic decision. If Trump is defeated in a landslide, and civilization as we know it doesn’t end, I might be tempted to retire early. I’ll have more free time, and whatever your cause, whether it’s to be a voice of sanity on your local school board, or to become part of a city council that makes real strides in providing affordable housing for everyone, I’ll help you with your campaign.